Government visa fees tell would-be immigrants that in the UK, money talks… . A series of  Shine A Light reports from the frontline of Britain’s immigration and asylum system. All illustrations by Carrie Mackinnon. All rights reserved.

These stories are fictionalised examples drawn from various clients’ experiences.

Paula loves Edison and wants to live with him
Edison is a 24 year old Brazilian man. He’s from Salvador in the north east. He met Paula, a 21 year old British woman, while she was travelling in Brazil after finishing university in the UK. They fell in love and want to be together. They have decided to make a home in the UK.

Paula wants to start her career in the UK and Edison is happy to give it a go. They have just got engaged and they are over the moon. Paula has done some research and knows she has to earn £18,600 a year before she can apply for Edison to live with her in the UK. She has started a job in marketing on a starting salary of £19,000. She lives in London and is paying a lot in rent and bills.

She has to pay £1,464 in Home Office fees (recently up from £1,195). She has no savings. She can’t afford it. But there is no way around it — if she does not pay, the application will not be considered. She also finds out that later on, when Edison wants to extend his visa or apply for British citizenship, he will have to pay more fees.

She tries to get help. Her parents say that she is an adult, so she has to deal with it herself. Edison earns very little in his job teaching surfing (that’s how he met Paula). He has no savings. Paula finally manages to borrow some money from her older sister.

She has looked into the application process and can see it is complicated. She wants to get a lawyer to help. Because of government cuts, there is no legal aid for immigration law. Most lawyers that she speaks to are charging £1,000 or more to help with this type of application. Paula finds a family and immigration law solicitor, Peter, who will do it for £500.

Peter neglects to ask Edison if he has ever come to the UK before. In fact he came to visit Paula last year. He was cautioned by the police for smoking a cannabis joint on the street. Peter does not record this in the visa application. The British Embassy dealing with Edison’s case refuse the application, claiming that Edison was trying to deceive them. The Embassy will not return the Home Office fee.

If Edison wants to apply again, he will have to pay the Home Office fee again. Peter is claiming that the Embassy’s refusal is Edison’s fault, not his. He is refusing to return any of his fee for his work. He says it will be hard for Edison to obtain a visa in the future. If Edison had mentioned the caution, it might not have been such a big problem. Edison is annoyed. He’d been smoking with Paula and her friends on the way to a party, but the police did not caution anyone else.

Paula and Edison are distraught. Paula doesn’t want to give up the career that she has just started in marketing. Her Portuguese is not good enough to find work in Brazil. And there aren’t many jobs in Salvador anyway.

What’s more, Paula has now heard that the Conservatives want to increase the amount that she will have to earn before she can apply for a visa for Edison to live with her in the UK. (It’s in their Manifesto). She only just had enough money this time, so she does not know what she will do if she and Edison make another visa application.

Paula and Edison feel even worse now that Edison tells Paula that his friend, Rodrigo, had a much easier time coming to settle in the UK. Rodrigo did not have to pay any Home Office fees when he applied and the application process was simple. He did not bother to hire a lawyer. He has just received his visa.

Paula learns that it was easier for Rodrigo because he is married to a Portuguese woman living in London. As his wife is an EU citizen, Rodrigo can apply under a different – and cheaper – system. Even though the UK is still in the EU, Paula does not count as an EU citizen in this situation. Rodrigo is now on his way to the UK (but he is worried about what will happen after Brexit).

Paula and Edison don’t know what to do next.

Samira wants to protect her mother
Samira was born in Canada. Some years ago, she met a British man, Faisal, online. They had plenty in common — they both had parents from India, they were both looking for a Western Muslim partner and they were both teachers. Samira obtained a spouse visa, then indefinite leave to remain (settlement) and now she is a British citizen. She and Faisal have two British children and they live in Cambridgeshire.

Back in Canada, Samira’s father recently passed away. Her mother Zarina is lost without him. He had always looked after her well, especially after she developed hip problems, which have limited her mobility significantly. She needs help going up stairs and moving around the house. She used to rely on her husband to drive her around. She is now alone and isolated. She wants to be with Samira, to whom she has always been close. Samira cannot move back to Canada – she is settled in the UK, with her British husband and children. Zarina, 67 years old, lives on her modest pension and has asked Samira to pay the costs of bringing her to the UK.

Samira stopped working as a teacher after the birth of her children. Her husband, Faisal, is currently supporting the family. He earns £38,000. The family are managing — just about. Samira thinks that it will be easy to bring Zarina to the UK. She found it fairly easy to obtain her visa and she assumes that the Commonwealth links between Canada and the UK will help. Just to be on the safe side, she has arranged a meeting with an experienced immigration solicitor, Vijay.

Vijay has a series of nasty shocks for Samira. First, her mother Zarina stands a low chance of obtaining the visa. It is unlikely that her situation is serious enough to meet the rules. Samira wants to try anyway. Vijay explains that the Home Office fee alone for the application is £3,250 (recently up from £2,676). He explains that the Home Office fees do not just cover the administrative cost of the system – they also contain a large profit element. His fees to help with the application will be £1,800.

Vijay points out that if — as is likely — the British Embassy dealing with the case refuse Zarina’s application, she may not be able to do much about it. She may not have a right to appeal to a court. If she does have a right to do this, she will need to pay more fees (some court fees and another £2,300 for Vijay). Zarina would probably have to wait at least a year for a court to hear the case.

Samira decides that she can’t go ahead with the application. It is just too expensive and too uncertain. She calls her mother, Zarina, to explain. But Zarina interrupts her to say that she has had a fall at home and is very upset. She wants to know how soon she can come to the UK.

Samira does not know what to say. 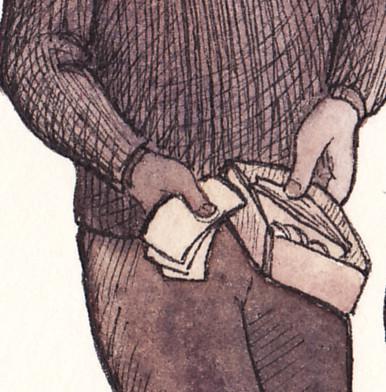 Hasan is a 41 year old Pakistani man. He knows exactly what to do and exactly what to say. After all, he is a multi-millionaire. He is attracted by the prestige of holding a British passport — something which, for all his money, his Pakistani passport could never bring him.

Hasan is taking advice from Charlotte, a solicitor in the City specialising in immigration for ‘ultra high net worth’ individuals. He will apply for an investor visa, offering to invest £10 million in a UK company. He will pay £1,561 in Home Office fees (recently up from £1,530) — not much more than Paula had to pay.

Hasan will pay Charlotte £15,000 for her services helping with his application. Charlotte tells him that usually, to get a long term visa, you have to be able to speak English. But this one is special; there is no language requirement.

Charlotte has told Hasan that the UK government wants to ‘roll out the red carpet’ for immigrants like him. The government will offer him a fast track to settlement within 2 years – for which he will be happy to pay the £2,297 Home Office fee (recently up from £1,875). By then, he will need to learn English, but Karen has promised to recommend some elite English tutors.

After that, Hasan will apply for British citizenship, unfussed by the £1,282 Home Office fee (recently up from £1,236). At each stage of the process, Charlotte will make sure that he is successful first time.

After Hasan obtains his British passport, he will probably withdraw his investment and put it back into his bank account in Cyprus.

As a multi-millionaire, Hasan has time to reflect on things. He knows that he obtained his wealth in Pakistan in questionable circumstances (though his expensive lawyers have made the allegations go away). He has always been willing to do anything necessary to get what he wants. Life in Pakistan showed him that was possible.

He doesn’t think much about the UK’s welfare state, but he hears that it is struggling anyway.

Social bonds
The government’s approach to visa fees encourages the Hasans of this world. It tells people who want to come to the UK that only the wealthy need apply. They reduce our social bonds to economic transactions. That makes us a poorer country.

Usman is a lawyer living in London. He set up and runs Ansar, a law firm that helps migrants in London

Our print magazine is Proof. Contributors include Michael Mansfield QC, Bob Woffinden, David Rose, Eric Allison and Ian Cobain.
Buy Proof Magazine
The latest issue (Why legal aid matters) includes Helena Kennedy QC and Martha Spurrier in conversation, David Conn on the legacy of Hillsborough - plus how to build your own law centre.
Usman is a lawyer living in London. He set up and runs Ansar, a law firm that helps migrants in London

'Nobody wants to go back to a place where they were scared'
UN warns Priti Patel over plans to process asylum…
Britain’s most notorious prisoner launches legal…
Episode 12: ‘It is very rare for an inquest to…
'Logistically moronic': Priti Patel looks at…