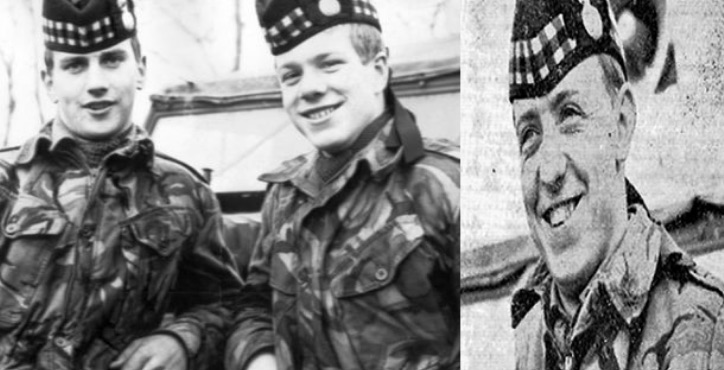 Should justice be crowdfunded? Will Bordell reports on the Three Scottish Soldiers campaign – representing the families of Fusiliers Dougald McCaughey, John McCaig and Joseph McCaig , murdered in cold-blood by the IRA – about their fight for justice.

First approached by members of the McCaughey family after the Historical Enquiries Report came out, McGurk has since been pivotal in bringing the case into the public consciousness once more.

The story is horrific, even by the cruel standards of the Troubles: three young men – Dougald McCaughey, John McCaig and Joseph McCaig – befriended in a bar and persuaded into the car that drove them to their deaths. They were shot in the head at a roadside not far from Belfast. Their bodies returned home in closed caskets. The perpetrators, some of whom have been identified, have never been punished.

At the time of writing 379 people, donating an average of roughly £30 each, had contributed to the families’ cause. McGurk has achieved his first target of raising the £10,000 that will allow lawyers to find out what information the police currently have, and to begin an application for legal aid funding. His next target is £100,000, in case private action is required. Campaigning through the legal crowdfunding website, CrowdJustice, McGurk has raised enough for the case to have a future – for now.

More than anything else the families want the truth, according to McGurk. But the case also raises the vexed and vexing issue of the seeming double standards to which British veterans and ex-IRA members have been held. McGurk believes that where veterans have often been prosecuted for their actions in Northern Ireland, IRA terrorists have not been pursued in the interests of peace—some granted amnesty, others granted high office. ‘You want to do what’s right by the family,’ says McGurk, ‘but you also want to do what’s right by our country’s standards.’

Families like the McCaugheys and McCaigs are well used to obstructions, delay and even outright opprobrium. A memorial near Belfast has been repeatedly attacked. Last Tuesday, John Mason MSP was forced to apologise for comments on Twitter that referred to the IRA as ‘freedom fighters’ in response to a request that he back the campaign. After emails were leaked revealing that the SNP’s chief whip had orchestrated the apology to avoid further embarrassment to the party, Nicola Sturgeon weighed in with an apology of her own. ‘No family should ever have to experience what yours has,’ she wrote in a letter addressed to Dougald McCaughey’s cousin, David.

Up until this point, McGurk explains, the families ‘haven’t had anyone offering them support. They haven’t had anyone really demanding that justice gets done for them. The mothers and fathers,’ he goes on, ‘they went to their graves without knowing that any of these avenues were open to them.’

Almost half a century after the crime took place, the families’ position would have remained unchanged were it not for the possibility of crowdfunding. ‘The military didn’t fail them,’ says McGurk. ‘The government failed them. And I think it’s a major failure on the government’s behalf.’

Now, they have hope.

Just the beginning
As so often for people like the McCaigs and McCaugheys, hope has come in the form of pounds and pence. The general public has heeded McGurk’s message: ‘We cannot just turn a blind eye to something because it didn’t happen to us personally,’ he says.

But this is just the beginning—a strange thing to write about a case nearing its 46th anniversary. Last Thursday, victims of the IRA Hyde Park bomb attack that killed four soldiers were again refused legal aid to fund their case against John Downey. The ‘comfort letter’ Downey had received from Tony Blair’s government in the wake of the Good Friday Agreement led to the collapse of the case that had originally been brought against him in 2013. Although the letter had apparently been sent to Downey by mistake, Mr Justice Sweeney decided that its immunity guarantees couldn’t be dismissed.

The Hyde Park families’ first request for legal aid had already been refused in March 2016 after it was deemed that the case was ‘not in the public interest’. After a High Court judge ordered a review of the Legal Aid Agency’s verdict in October, last week’s verdict ensured that the families were rebuffed for a second time. The reason why? The cost of bringing the Hyde Park case was apparently ‘not proportionate to the benefits’ of potential prosecution.

‘I think it would be disgusting for the McCaughey and McCaig families to be refused legal aid,’ argues McGurk, ‘especially under the horrific circumstances in which their sons and brothers were murdered.’ In his opinion, the government is in denial when it claims that it closed the history books on the Troubles in 1998. ‘If there are still victims out and they haven’t been helped, then the Troubles can’t be finished,’ he says.

Crowdfunding, by the pound
Because of cuts to legal aid, a whole slew of cases—civil as well as criminal—are finding themselves on the lookout for alternative sources of funding. On the CrowdJustice platform, they compete for attention: ‘Stop the Monster Multi-Storey Car Park in Berkhamsted’, ‘Challenge Government support of fracking’, ‘Bring IRA Killers of British Soldiers to Justice’.

‘Usually,’ says Julia Salasky, the founder of CrowdJustice, ‘people are reaching out to networks who are naturally interested in the outcome of a case—because one of their friends or family is affected, or because the issue at stake is something they really care about.’ Support for most campaigns drips in bit by bit. About 99 per cent of donations come from individuals, Salasky reports, at an average of £35 per donation. In Salasky’s experience, specific legal projects like the ISCRE’s anti-discrimination campaign are the only real exception, attracting funds from law firms and businesses.

Popular, emotive, well-run campaigns sit alongside the unfashionable, the technical and the controversial. Salasky refutes the notion that compassion fatigue might set in among donors who are repeatedly asked for money, draining their initial enthusiasm to contribute. ‘It’s much more concrete than general philanthropic giving,’ she argues, ‘because people backing the case have the opportunity to make a real difference through the court system.’ 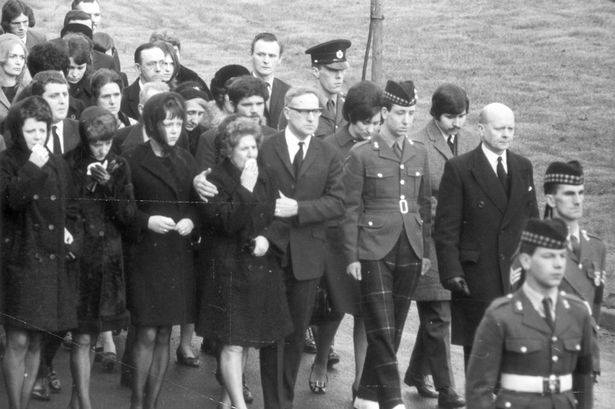 Picture of the funeral of Dougald McCaughey (www.threescottishsoldiers.org)

Justice with one face
For the McCaughey and McCaig families, who have so far raised £11,310 (and counting), crowdfunding has allowed them to begin to build a case that’s 46 years in the making. ‘You’re just asking for justice to be justice,’ says McGurk. ‘You don’t want justice to have two faces. You just want justice to have one face.’ He has learned to expect setbacks, but he still struggles to accept the realities that force families like the McCaugheys and McCaigs to go cap in hand to the general public.

McGurk has steeled himself for the journey ahead. He knows that, for him and the families, there’s a long way to go. ‘I always prepare for the worst,’ he says, ‘and hope for the best.’
You can donate to the ‘Three Scottish Soldiers’ campaign here, on the CrowdJustice website.