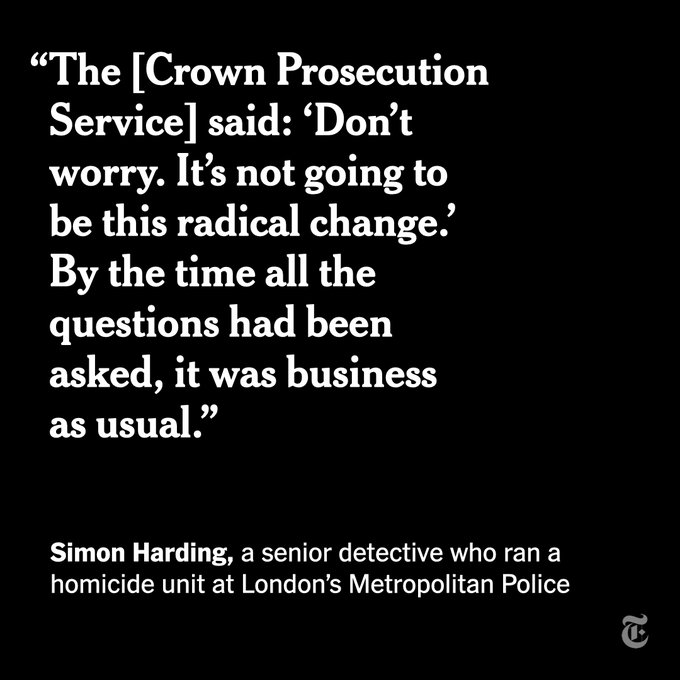 There has been a significant ramping up of ‘joint enterprise’ prosecutions in the five years since the Supreme Court ruled that the law had taken ‘a wrong turn’. According to an investigation by the New York Times (NYT), data from the Ministry of Justice shows a 42% increase in the number of murder cases involving four or more defendants since the landmark judgment of Jogee and that black defendants are three times as likely as white.

In 2016, the UK’s highest court delivered a landmark ruling that said courts had got the law wrong for decades. The ruling was expected to result in a sharp drop in prosecutions and scores of overturned convictions. None of that happened.

According to the NYT investigation, the increase in the use of joint enterprise has been the result of a deliberate strategy to ensure successful convictions despite concerns by the courts about the soundness of the law as well as concerns from MPs about how the law acts as a ‘dragnet’ disproportionately drawing young black men into the criminal justice system.

As widely reported on the Justice Gap, the 2016 ruling was anticipated to herald a wave of successful appeals however the Court of Appeal almost immediately closed off the possibility of successful appeal (in the case of R v Johnston). Since the ruling, there have been just two successful joint enterprise appeals – the first being John Crilly and the second being Philippe Sossongo. According to the NYT report, of 156 joint enterprise-related cases submitted to the miscarriage of justice watchdog Criminal Cases Review Commission, only four were sent to the appeals court. Judges rejected all of them.

The NYT report by Jane Bradley draws on data on homicide prosecutions involving four or more defendants obtained through multiple Freedom of Information Act requests: 59 such cases were brought from 2011 to 2015 (an average of 11.8 cases per year), compared to 84 (16.8 cases per year) between 2016 and 2020. According to the NYT data, almost a third of Black defendants (32%) were prosecuted in cases with four or more defendants, compared with nearly one in 10 white defendants.

The article sees joint enterprise as one of a number of tactics ‘imported from the 1990s war on drugs’ in the US. But, it is argued, while ‘American officials have reconsidered many criminal justice policies over the past decade’ such approaches have become ‘an entrenched part of British politics’.

‘The zealous use of these prosecutions is one example of how British leaders from both parties have pursued criminal justice policies that have disproportionately punished Black people,’ Bradley writes in the NYT. ‘Black defendants are three times as likely as white defendants to be prosecuted for homicide as a group of four or more — a widely accepted measure of joint enterprise cases — according to the new data’.

The article claims to draw on interviews with a dozen prosecutors and law enforcement officials including Simon Harding, a senior detective who ran a homicide unit at London’s Metropolitan Police until 2021. Harding recalls how campaigners and prisoners apparently received the Jogee ruling. ‘In prison, you could hear all these people saying, “Yes!”.’ Harding explained: ‘The CPS said: “Don’t worry. It’s not going to be this radical change.” By the time all the questions had been asked, it was business as usual.’

The NYT article continues: ‘They needed a strategy for convincing jurors that people intended to commit the crimes, even when they did not carry them out themselves. An elite group of lawyers with the office of the attorney general… trained officers and prosecutors nationwide on how to do just that.’

The article also shines a light on the ‘refusal’ by the CPS to publish data on  joint enterprise despite calls by the House of Commons’ justice committee in 2014. ‘After The Times filed two formal complaints with the government and the public prosecutor’s office, they relented and provided data on multi-defendant homicide cases,’ the NYT notes.