Exactly how many judicial reviews are there?

Exactly how many judicial reviews are there? 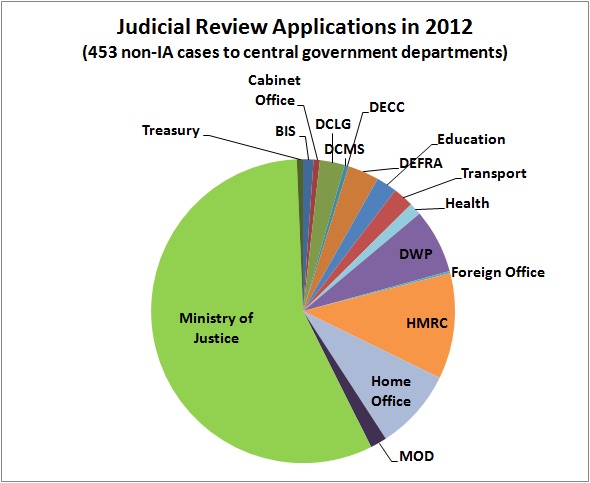 During the debate in parliament at the beginning of last month (December 1, 2014), Chris Grayling was asked how many judicial review cases are brought against government ministers.

Julie Hilling (Bolton West) (Lab): ‘The right hon. Gentleman says “all the time”. Will he give us a notion of how often that is—once a day, once a week, once a month? How many times have such cases happened since April, for instance? He is giving the impression that they happen all the time, but what does that mean?’

Chris Grayling: ‘A Minister is confronted by the practical threat of the arrival of a judicial review case virtually every week of the year. It is happening all the time. There are pre-action protocols all the time, and cases are brought regularly. Looking across the majority of a Department’s activities, Ministers face judicial review very regularly indeed. It happens weeks apart rather than months apart.’

The minister gave no actual numbers in his answer.

So, in this post I’ve looked at how many judicial review (JR) cases were received by central government departments (‘ministers’) over the past few years. This analysis relates to my work with Christopher Hood in the Politics Department at Oxford. There is a good discussion of the wider issues raised by Chris Grayling’s responses during that debate by Mark Elliot on the Public Law for Everyone blog.

In this post I just look at the numbers. The number of JR cases received by each UK government department can be found in this database of JR cases from 2007 to 2012, which lists over 57,000 JR applications, giving the topic, defendant and outcome of each case. For this analysis, I corrected the data for misclassifications according to this revision note. (More recent JR databases are correctly classified, but do not report the defendants).

The largest group of JR applications were Immigration and Asylum (IA) cases (almost 10,000 in 2012, or 80% of the total). In the future IA cases will be almost entirely considered by tribunals, so I’m excluding them here (and in any case, they do not appear to be the type of case that the Justice Secretary was referring to).

There were just under 2,500 ‘non-immigration’ cases per year, which I show in the graph below split into four broad categories of defendant: Criminal Justice System (e.g. courts, police, prisons), Local Authorities, Central Government Departments, and ‘Other’ (e.g. medical councils, schools, NHS and tribunals).

Central government departments received fewer than 500 JR cases each year, broken down by department as follows:

Only four departments received more than 15 judicial review cases in 2012.

By far the most were received by the Ministry of Justice (MoJ, 257), followed by HM Revenue & Customs (HMRC, 51), the Home Office (39) and Department for Work and Pensions (DWP, 31). The other ~20 Whitehall departments received an average of about 5 cases a year (a few received none over the six years and don’t appear in the table).

The topic ‘Prisons’ made up 70% of MoJ cases, ‘Tax’ and ‘VAT’ comprised 90% of HMRC cases; 80% of DWP cases were about benefits and social security. No single topic dominated the Home Office non-IA cases (though this department also received the vast bulk of IA cases). The information in the database is not detailed enough to identify the ‘politically motivated’ cases that particularly concern Chris Grayling. Planning is sometimes mentioned as an area in which JR is used to delay important infrastructure projects. In 2012 just 10 JR cases regarding ‘Town and Country Planning’ were addressed to government departments (9 to DCLG and 1 to DEFRA) compared with 188 addressed to local authorities.

Considering the vast numbers of government decisions that are made every year, we don’t see an explosion of judicial challenges to central government departments.

The Ministry of Justice is a clear outlier, receiving more than half of all such cases (and another large tranche of cases is concerned with the wider criminal justice system). Perhaps the minister should look at the quality of decision-making in his own department and its agencies before seeking to limit judicial review.
This article first appeared on Ruth Dixon’s blog here. You can follow Ruth on Twitter (@ruth_dixon)

Ruth works at the Department of Politics and International Relations at the University of Oxford. Her post is funded by the Leverhulme Trust to study changes in executive government over the past 30-40 years

Our print magazine is Proof. Contributors include Michael Mansfield QC, Bob Woffinden, David Rose, Eric Allison and Ian Cobain.
Buy Proof Magazine
The latest issue (Why legal aid matters) includes Helena Kennedy QC and Martha Spurrier in conversation, David Conn on the legacy of Hillsborough - plus how to build your own law centre.
Ruth works at the Department of Politics and International Relations at the University of Oxford. Her post is funded by the Leverhulme Trust to study changes in executive government over the past 30-40 years

Government inquiry into judicial review 'not credible'
Government to reverse Grayling's disastrous…
Government response to Faulks review ‘cover for…
'Judicialisation' of politics gone too far, says…
'Unlawful acts will go unchallenged' as a result of…