‘Not a lesbian’: Aderonke Apata and the impossibly high threshold for asylum claims based on sexuality

‘Not a lesbian’: Aderonke Apata and the impossibly high threshold for asylum claims based on sexuality 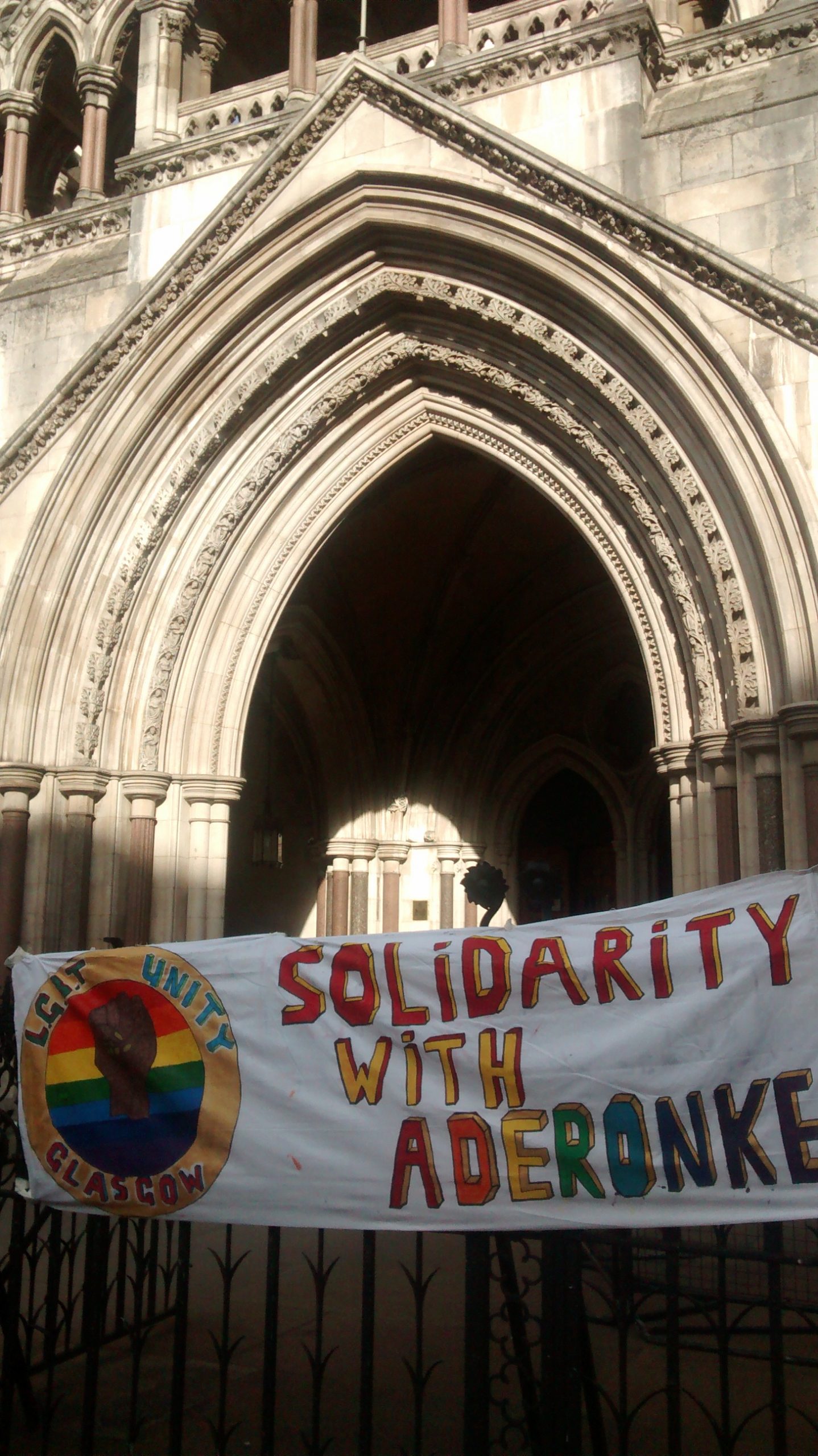 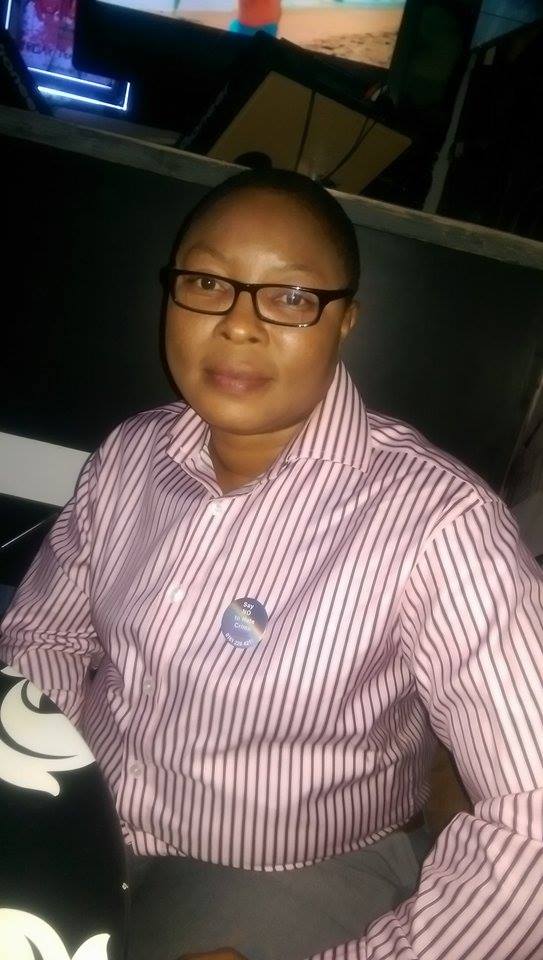 Yesterday, on the same day that damning findings of a Parliamentary Inquiry into the use of Immigration Detention in the UK were published, a judicial review of the decision to deport Nigerian LGBT activist Aderonke Apata from the UK was heard in the High Court.

The Home Office wants to deport Aderonke, who gave evidence to the Parliamentary Inquiry about the harassment and hate crime she experienced in Yarl’s Wood Immigration Removal Centre, but in her come country, Nigeria, same-sex relationships are punishable with a long prison sentence and so Aderonke is seeking recognition as a refugee as a lesbian and LGBT rights campaigner. Although Aderonke first applied for a judicial review of the decision to deport her unrepresented, because she was unable to find a legal aid lawyer to help her, by the time of the hearing she had secured representation from immigration law barrister Abid Mahmood.

Aderonke has won a national diversity award as an LGBT role model (for which she received 21,000 nominations), she was named in the Independent’s 2014 Rainbow List and she is currently in a relationship with her partner Happiness, a recognised refugee. As well as giving evidence to the Detention Inquiry, Aderonke has been a guest speaker at the Ministry of Justice, set up Movement for Justice in Manchester and is a patron for community empowerment organisation Proud2be.

Despite this, the Home Secretary, Theresa May MP, (through her barrister, Andrew Bird) argued at the hearing that: ‘yes [Aderonke] had engaged in same sex activities’, but on the other hand ‘lesbian is not a sexual choice… one can’t be a heterosexual one day and a homosexual another’. Mr Bird suggested Aderonke was not a lesbian because she has a daughter and that Aderonke ‘has deliberately altered her appearance…to a lesbian stereotype’. Doubting that Aderonke could undertake LGBT activist activities when suffering from depression, Mr Bird also said: ‘if she is suicidal and depressed she is making a jolly good show of it’.

An insuperable threshold
The evidence in Aderonke’s case is strong, but her previous immigration history (and adverse credibility findings from the Immigration and Asylum First-tier Tribunal in 2012) continue to dog her steps today. Yet it is hard to see what more evidence a person in Aderonke’s position could provide to change the Secretary of State’s mind and grant her refugee status. Demanding absolute evidence for sexuality is seeking objective proof of a subjective matter and may be setting an insuperable threshold for success. The official threshold is supposed to be relatively low – you only have to show a ‘real risk’ that you might face persecution on return – but in practice applicants are being held to an unrealistically high standard of proof. If Aderonke cannot succeed in convincing the Home Office that she is a lesbian, despite providing such a wealth of evidence, what hope is there for the myriad other claimants? What hope for those like the vulnerable 18 year old care leaver I advised who has come out, but does not have a current partner or a public profile? 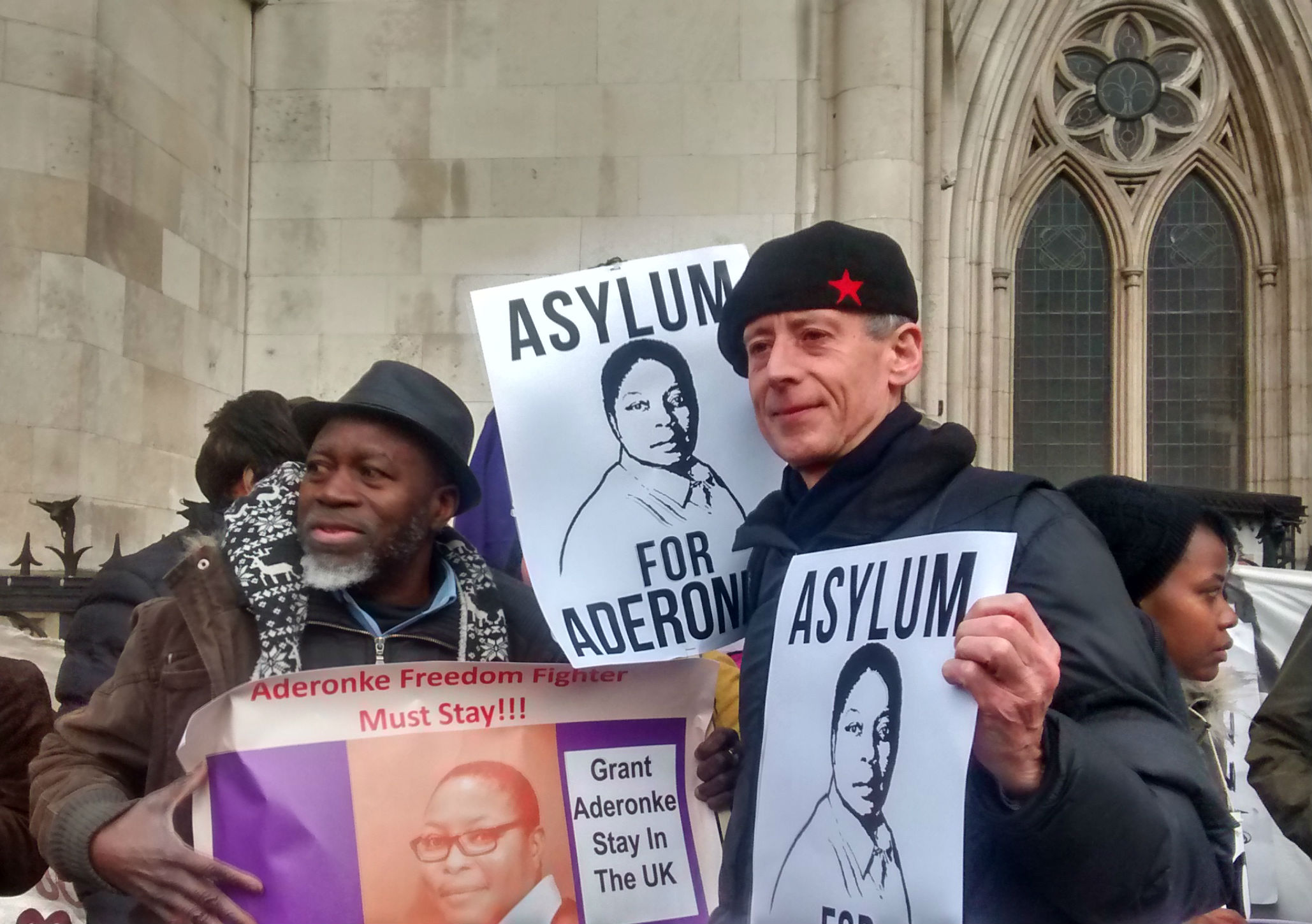 The courtroom was packed for Aderonke’s hearing, with supporters, including LGBT rights campaigner Peter Tatchell, queuing outside alongside others from Newcastle, Southampton, Sheffield, Manchester, Portsmouth, Scotland and Wales. The Judge exceptionally gave permission for supporters who had travelled through the night from the Unity Centre in Glasgow to sit on the QCs’ bench, when there was no room for them at the back of the courtroom.

In the judicial review the Court looked at the case of HJ (Iran) (a case notorious for the judge’s comments on the right of gay men to listen to Kylie Minogue) and heard from Aderonke’s lawyer that she cannot be expected to hide who she is in Nigeria, or else face persecution. Despite this hearing being a ‘judicial review’ (usually just a review of whether the original deportation decision was lawful), there was also considerable examination of the factual evidence to help the Court conclude whether Aderonke would be at risk now if the Court were to refuse her case. If the Court finds on the documentary evidence that she would be at risk then she is a short step away from the Secretary of State recognising her as a refugee; if not then her battle continues.

‘Nothing good comes easy’
Sitting amidst Aderonke’s supporters in the gallery, there was something surreal about hearing counsel for the Secretary of State, Mr Bird, debate with the Judge about the ‘genuineness’ of a black lesbian woman’s sexuality. Mr Bird argued that even if Aderonke self-identifies as a lesbian and sleeps with women, this does not make her a lesbian, because she has not always self-identified as a lesbian: by ‘coming out’ she has shown her sexuality is not an immutable characteristic (which is part of what she has to show to fall within a ‘particular social group’ in the definition in the Refugee Convention). 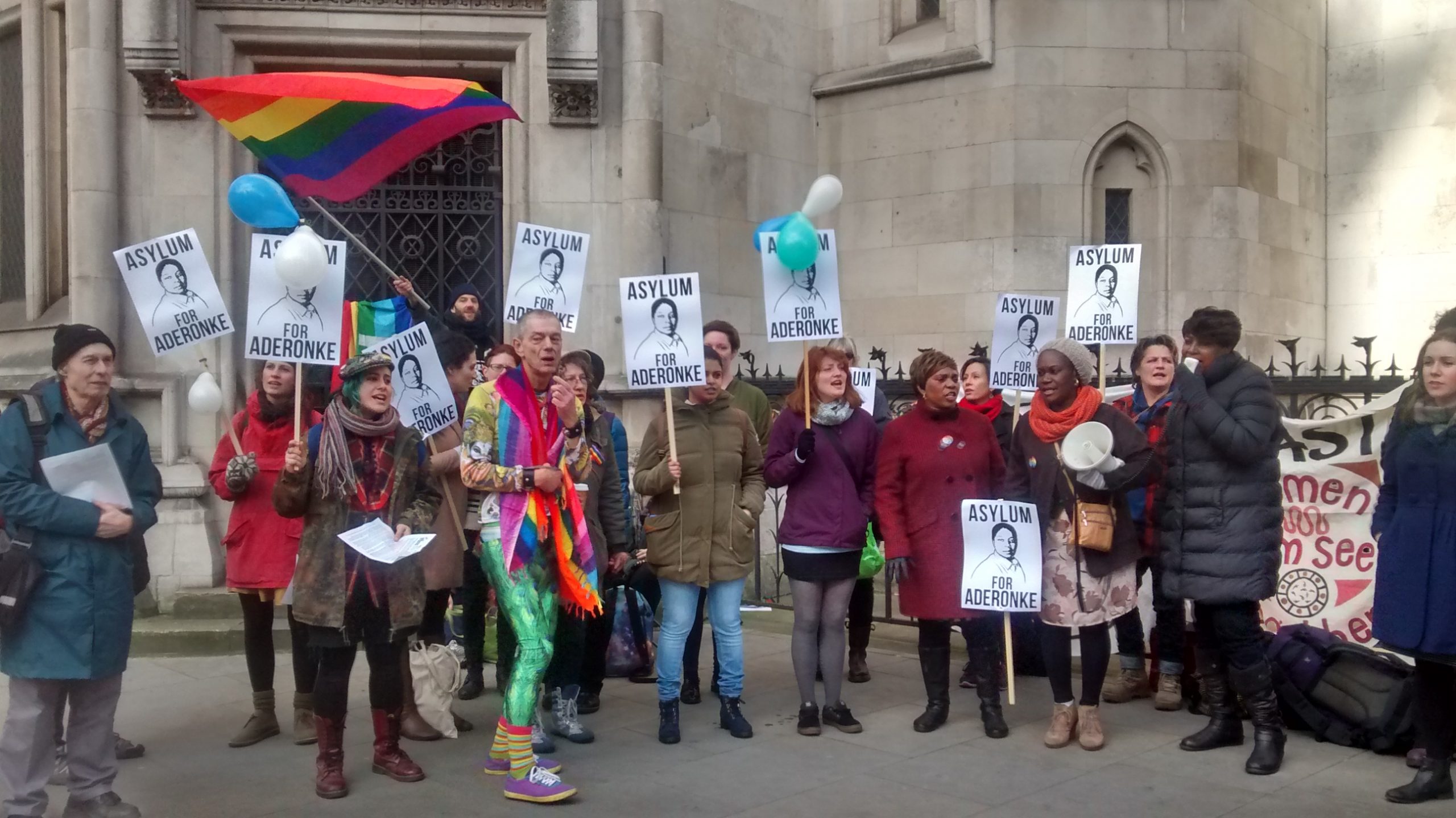 Supporters of Aderonke Apata outside the High Court yesterday

Aderonke’s lawyer Mr Mahmood rightly said this analysis was wrong. What Mr Bird’s case fails to take into account, he argued, is the stream of case law which shows that the real test is whether a characteristic is in the control of the individual to change (and so ‘mutable’) or whether it is a part of themselves that they cannot at this time be expected or able to change (and so ‘immutable’). So for example a child seeking asylum cannot force themselves to be older so they are not at risk on return and likewise a lesbian asylum seeker cannot simply choose to change their sexuality. This is notwithstanding that a child will eventually grow up and that there may have been a time in her past where a lesbian woman had not identified herself as a lesbian.

The Judge did not give his judgment on the day, but stated his intention to hand it down before the end of the month. After the hearing I discussed the case with Aderonke and her partner Happiness. I heard a little of their touching story: they met while locked up in Yarl’s Wood Immigration Removal Centre (Happiness arrived in detention and Aderonke served her in the kitchen). Aderonke mentioned in passing that she had been a Yarl’s Wood ‘Employee of the Month’ while earning £1 a day in the canteen: a rather startling award from the immigration authorities for someone facing deportation for working unlawfully. Happiness said she would meet whatever happens next with Aderonke; she said it would be worth it because ‘nothing good comes easy’.

Jennifer is a barrister at Coram Children’s Legal Centre.

Our print magazine is Proof. Contributors include Michael Mansfield QC, Bob Woffinden, David Rose, Eric Allison and Ian Cobain.
Buy Proof Magazine
The latest issue (Why legal aid matters) includes Helena Kennedy QC and Martha Spurrier in conversation, David Conn on the legacy of Hillsborough - plus how to build your own law centre.
Jennifer is a barrister at Coram Children’s Legal Centre.

8 responses to “‘Not a lesbian’: Aderonke Apata and the impossibly high threshold for asylum claims based on sexuality”