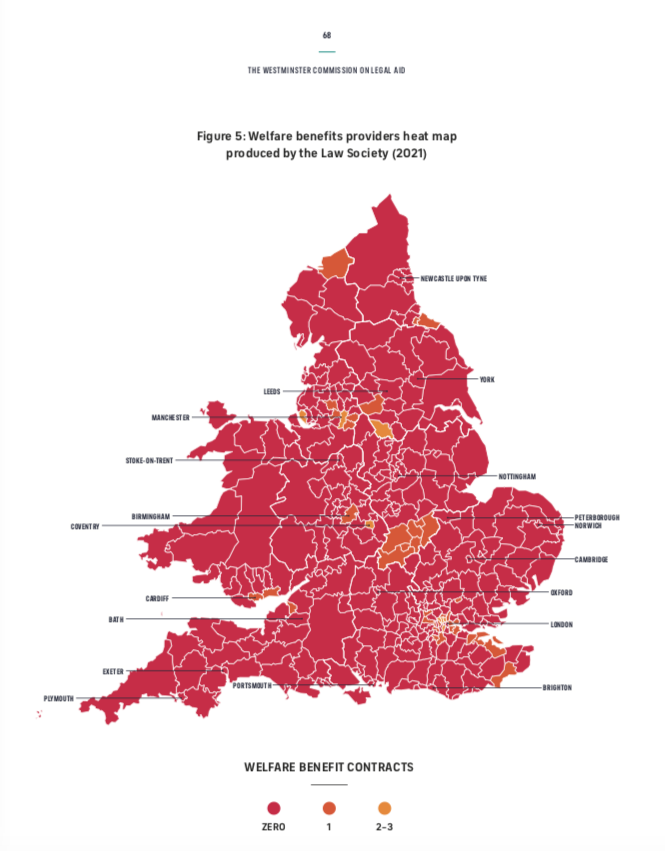 The ‘overwhelming consensus’ amongst those lawyers still undertaking public-funded law was that legal aid work was ‘financially unviable’ and its ‘short-to-medium term’ future uncertain, according to a report by a cross party group of MPs and peers. A commission set up by the All-Party Parliamentary Group on Legal Aid (APPG) chaired by Karen Buck MP has called for the reinstatement of areas of social welfare law, including access to early help, removed from the scheme under the 2013 following the 2013 cuts.

‘The sector as a whole is in desperate need of revitalisation and investment if it is to meet public demand in the years to come,’ reports the APPG which claimed that the sector was at ‘a pivotal moment’. Other members of the APPG group include Baronesses Helena Kennedy, Natalie Bennett, Lord Willy Bach, Lord Colin Low, Daisy Cooper MP, James Daly MP and Gareth Bacon MP. It reports that a series of cuts and reforms over the past two decades – most notably the LASPO (Legal Aid, Sentencing and Punishment of Offenders Act 2012) cuts – meant that the proportion of the population potentially eligible for civil legal aid was ‘becoming increasingly small’. The APPG described the state of health of the not-for profit sector post-pandemic as ‘perilous’. On the criminal side, the position had been ‘altered less dramatically, though urgent problems do exist’ such as ‘an ageing criminal defence profession, collapsing court duty schemes and decreasing numbers of firms holding criminal legal aid contracts’.

‘It is fair to say that the number of people deemed eligible for legal aid was in decline long before LASPO and the pandemic. The proportion of the population eligible for legal aid fell from 80% in 1980 to 52% in 1998 and then to 29% in 2007. The Commission heard a wide range of evidence that showed there is now a substantial gap between those who qualify for legal aid and those who can afford to pay privately for legal help and representation. We believe that there is an urgent need for action to halt the decline in eligibility and to ensure that access to justice is within reach of all those who need it.’
APPG on Legal Aid, Inquiry into Sustainability 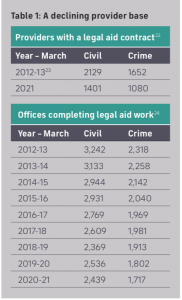 The cross-party group took issue at the Ministry of Justice’s stock response to journalists over the last decade over concerns about access to justice that the legal aid system in England and Wales was ‘the most generous’ in the world. ‘The legal aid system has been depicted as bloated and inefficient, an optional luxury, the preserve of a metropolitan elite,’ they said. ‘So when spending cuts have been made by Labour, Conservative and coalition governments, legal aid has shouldered a disproportionate burden. These cuts belie the fact that the system is more expensive than that of our European counterparts as we operate an adversarial system of justice.’

The APPG identified ‘a worrying inequality of arms’ for those unable to access legal help in ‘the most emotive and challenging of cases’ over the last 12 months. It recommended an ‘urgent simplification and reform’ of the means test as well as a complete overhaul of LASPO’s much criticised exceptional case funding (ECF) regime. The scheme was supposed to be a safety net provision allowing funding for those cases which otherwise would not receive it. ‘ECF system is not fit for purpose and in urgent need of review,’ the APPG said.

Legal aid rates had been been frozen for more than two decades in some areas and the APPG recommended they be increased in line with inflation. The APPG pointed out there had been no research undertaken into the financial viability of civil firms but anecdotal evidence indicated that those delivering legal aid were ‘generally doing so at a loss and/or reliant on subsidies from private work or grant funding’. The group cited a 2014 report which looked at the profitability of criminal firms prior to a 8.75% fee cut in 2014 which found each fee earner was estimated to cost their firm around £96,000 (in other words, they would need to generate that level of income for their firm to break even).

A series of witnesses attested to how such rates were no longer sustainable. The Law Centres Network reported that it costs their member ‘approximately £65 per hour’ to employ a solicitor or caseworker. However the rates were typically between £43 and £69 per hour but, ‘depending on case lengths’, could be as low as £17 per hour. On the basis of an average case taking 10 hours, according to the group that might cost £656.80 ‘well above most fixed fees – but in many cases below the threshold for claiming escape fees’.

The legal charity the Public Law Project explained that the £259 fixed fee covered all work prior to issuing proceedings. ‘So potentially quite a lot of work,’ said the groups’s director Jo Hickman. ‘The nominal hourly rate on which that fee is premised is… £51.18, and our internal modelling suggested that our actual recovery for fixed cost work was less than £36 an hour.’ She said the charity was able to ‘generate some income through our sort of legal aid contracts and through our fees’ but the group subsidised their casework ‘very heavily through charitable income from other sources’. She added: ‘And that’s just not an answer for the vast majority of the sector. So, the sums that are now available are not economically viable in a for-profit model.’

Family firms were ‘not managing’, according to Jenny Beck QC (hons). ‘In family law firms are turning to more private work in order to balance. 80% of my team do publicly funded work,’  the group. ‘However, the spread of our income is 50/50. So, 20% that do private provide 50% of fee income. This is the only way we can survive.’

MPs to investigate 'unnecessary' arrests of women
Parliamentary Inquiry into women in prison launched…
LASPO review 'just kicking the can down the road'
Victims of trafficking failed as a result of legal…
Election 2019: Opposition parties' manifestos compared