On Monday October 31st – just hours before the government announced it would not be holding the inquiry into the orchestrated police violence towards the Orgreave Miners – the Court of Appeal handed down its first judgements on the joint enterprise appeals since the Supreme Court ruling of R v Jogee.

We were there in support of the prisoners and families of the Johnson brothers, the Miah brothers, cousins Tyler Burton and Nicholas Terrelonge and Michael Hall. Every case was refused. Even though when we attended the appeal hearings in June, the same Appeal judges seemed to indicate several of these cases could not be murder – in Hall’s case, Lady Hallett said: ‘I can’t see beyond violent disorder here.’

All of these men were secondary parties at best – Javed Miah is even captured on CCTV leaving his home several minutes after a murder had been committed along the road on which he lived before returning inside. For his ‘involvement’ in joint enterprise murder, he is serving 26 years, the actual murderer, someone Javed barely knew, received 25 years.

We were only given four days’ notice that the court was going to hand down their decisions but we still managed to mobilise families and press to turn up. The fact that the press was as astonished as us that all the cases were knocked back is testament to how far our campaign has come in convincing people about the injustice of joint enterprise convictions. The appeal decision was broadcast on national television immediately after the Orgreave decision.

A shocking day for justice.

Sticking plaster
What the Court of Appeal did was not law, nor was it justice, it was sticking a flimsy plaster over a festering wound. The Supreme Court ruled that the doctrine was ‘wrong’ and had been taking its ‘wrong turn’ for over 30 years. So, surely, every single case prosecuted using the now discredited ‘parasitic accessorial liability’ doctrine in those intervening years did not have a fair trial (see here)?

The Supreme Court and the Court of Appeal are petrified of the outcome of appeals and the possibility of ‘floodgates’ being opened. That is why they added the ‘substantial injustice’ clause in paragraph 100 of the ruling (leave to appeal would be granted ‘if substantial injustice be demonstrated, but it will not do simply because the law applied has now been declared mistaken’). When I asked Lord Toulson, formerly of the Supreme Court, about that at a conference at Liverpool University he replied it was there because commentators would all be saying killers were going to be let loose. Hence concern about ‘floodgates’ and ‘public opinion’ but not necessarily justice.

Let’s be very clear we (JENGbA) are not about letting killers loose, nor do we expect that every case of the 740 prisoners we are currently supporting will be overturned. But the fact is the Supreme Court acquittal of Jogee, ordering a retrial in which he was acquitted of murder and found guilty of manslaughter, should have signalled the lower court to look at these appeals robustly and, at the very least, fairly.

They should have considered the convictions based on the facts and no longer being able to rely on foresight but on each defendant’s intention. They didn’t, they cowered before a baying public and a MoJ who think that victims’ rights supersede justice.

But having people wrongfully convicted does not give closure or justice to victims, as the Victims Commissioner said on Twitter just the other day:

Almost time to speak @WestminBriefing re. Victims’ Code. To me, justice means both offenders & victims shd be given rights & treated fairly 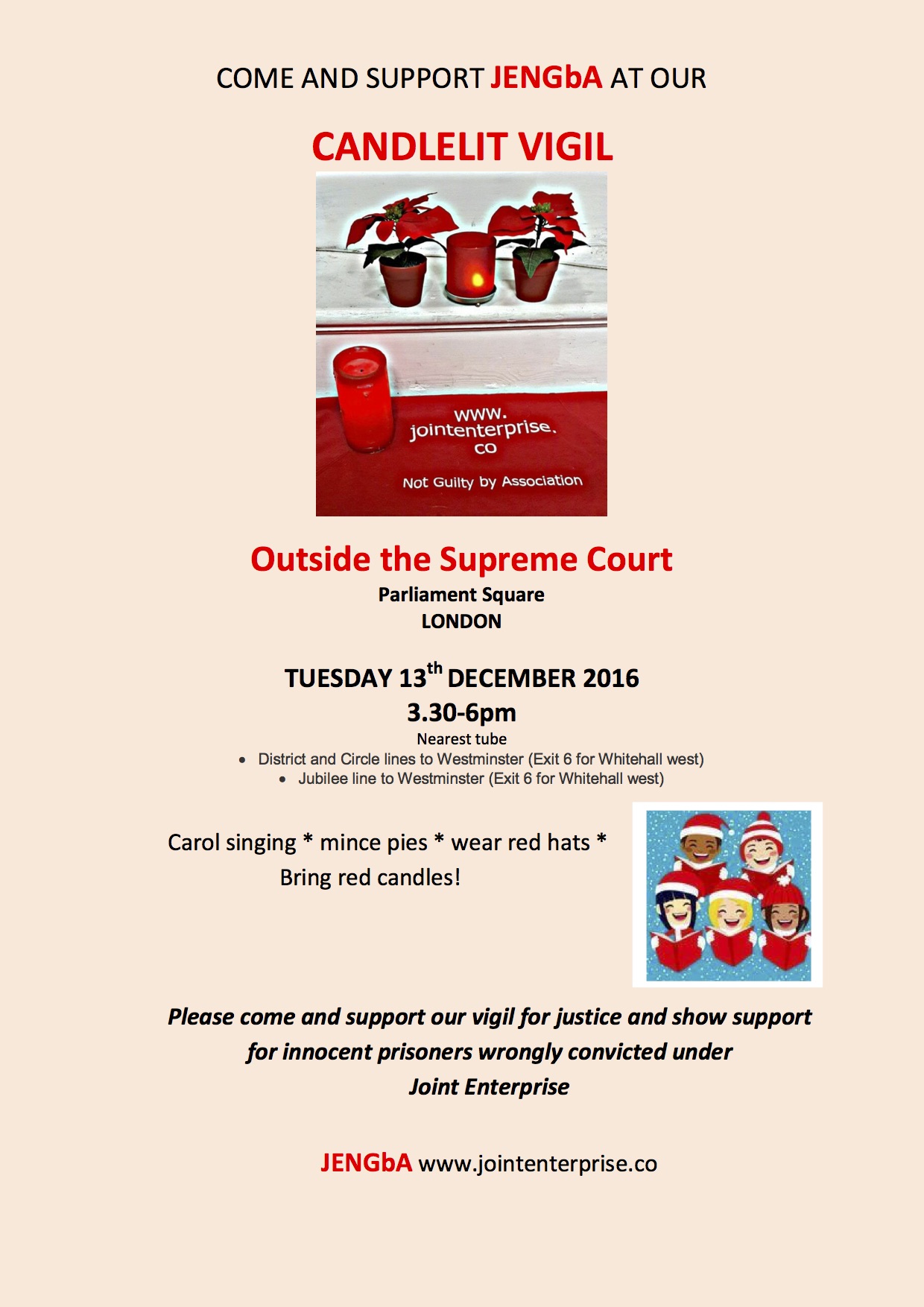 So what next for JENGbA? Our lawyers are looking into how we go forward with legal challenges and strong appeals that can’t be lawfully ignored. We have been invited to a meeting with Liz Truss’s team.  We will be holding a vigil outside the Supreme Court on December 13 at 3.30pm, please come in support.

We have been invited by David Lammy to submit to his inquiry into racism in the justice system. Since it has been long proven that joint enterprise discriminates against black and ethnic minority individuals our data will prove that it is both unjust and inhumane. ‘Substantial injustice’ is when you are convicted of murder in an incredibly damaging prison system, serving a mandatory life sentence (on average 26 years), being released on life licence and with a murder conviction ruining any chance of a normal existence outside of prison, when all the while you have not intended nor foreseen that a murder was going to be carried out.

A tenacious documentary filmmaker Anton Califano has been following JENGbA’s campaign for the last five years. He has filmed our trials, tribulations and our successes. The documentary Killing the Law is near completion and Anton and his production team are crowdfunding so they can finish it off. This film will be one of the most important developments to date and anyone watching it will be under no illusion as to what our campaign is really about and why it is so important. Please support it if you can (here).  JENGbA is the festering wound and if the Court of Appeal thinks we are going to give up and go away they very much underestimate our resolve.