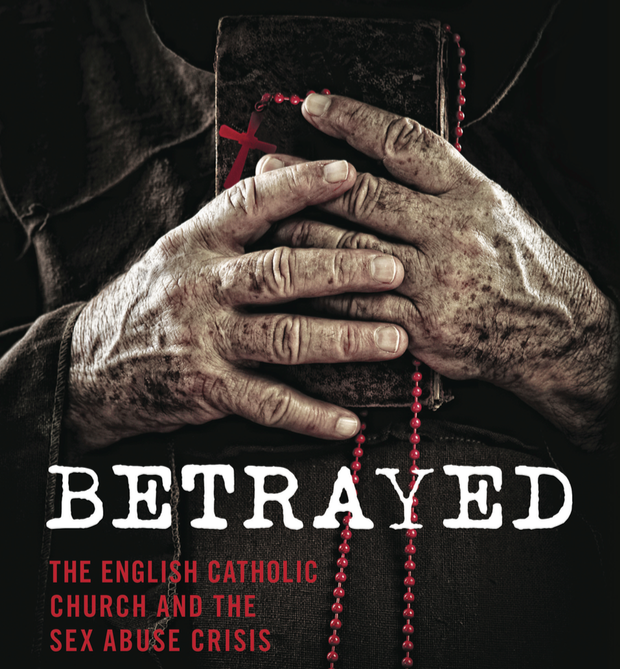 From the front cover of Richard Scorer’s book ‘Betrayed: The English Catholic Church and the Sex Abuse Crisis’, published by Biteback books

Is the current wave of public concern about child abuse a ‘moral panic’? The level of public and media attention on abuse is certainly unprecedented. It was triggered, more than anything, by the devastating revelations about Jimmy Savile in 2012. Since then, public attitudes have changed dramatically.

I started representing abuse survivors in 1995. My early years were dominated by local authority care home cases, particularly the Waterhouse Inquiry in North Wales.  By 2000, investigations into care home abuse were under way in most major urban centres. But the wider implications of what was being uncovered were not much discussed in the media. What the care home scandals in fact suggested was that abuse was likely to be widespread in many institutions. But it took many years for that truth to dawn on the public and legislators.

It’s true that, over the decade leading up to the Savile revelations, other scandals were coming to light – in the Catholic Church, for example. And cases like Baby P also raised serious concerns.

But there is no doubt that following Savile, something extraordinary and unprecedented has happened. The penny has dropped – institutional child abuse has been widespread. It has pervaded powerful organisations and has involved individuals who were once trusted. Our politicians have struggled to give voice to the ensuing public disquiet, and indeed have themselves fallen under suspicion for covering up abuse within their own ranks.

Perhaps predictably, some have tried to dismiss that heightened public concern, characterising it as moral panic – an ‘intense public feeling about an issue that appears to threaten the social order’ and which is ‘unfounded in fact and motored by irrational fears’.

But is the current wave of public concern around abuse a moral panic in any meaningful sense? No, it isn’t. In some respects the phrase ‘moral panic’ has become rather hackneyed. On Spiked online, anyone who expresses even the mildest concern about any social problem – obesity, internet trolling, sexual harassment, inequalities of wealth, etc – is immediately accused, with tedious predictability, of moral panic.  In some quarters, dismissing real social ills in this way has become a substitute for reasoned argument.

But more importantly, the central feature of a true ‘moral panic’ is that it is wholly or at least largely ‘unfounded in fact and motored by irrational fears’. Much as some people might wish to pretend otherwise, I’m afraid this simply doesn’t apply to most of the child abuse which is now being exposed. Institutional child sexual abuse is real and widespread.

At Slater & Gordon we represent more than 800 survivors of that crime. We know from their testimony that in many institutions appalling abuse has been allowed to go on unchecked for decades. Survivors have campaigned to try to bring it to light. For many years, they were largely ignored. What we see now is a necessary correction as society starts, at last, to grapple with that awful truth.

Of course, coming to terms with past horrors means just that – the legal system, through Operation Yewtree and the like, now has to address crimes committed many years ago. Some have attacked the prosecution of old offences.

But victims’ delays in reporting are inherent in these crimes. As Sedley J said: ‘It is in the nature of the abuse of children by adults that it creates shame, fear and confusion, and these in turn produce silence. Silence is one of the most pernicious fruits of abuse. It means that allegations commonly surface, if at all, only many years after the abuse has ceased.’

If – as some advocate – we refused to prosecute any case after the expiry of a fixed time limit, we would inevitably reward those abusers who are most successful in intimidating and silencing their victims. Justice cannot be time limited. Do we want a society where a man can rape a child with impunity? I don’t. If we want to expose and punish criminal behaviour – and I believe we should – then we will have to deal with the fact that many victims, quite understandably, have been too scared to disclose, and are only now starting to feel any confidence in doing so. And that greater willingness of victims to disclose should not be overstated.

Many still find it extremely difficult, and as a society we are a very long way from having a properly resourced system of ‘safe places’ where victims can talk about their experiences. This is a key priority for a Victim’s Bill. And the fact that even now, outstanding survivor support organisations like NAPAC and the Lantern Project are struggling to stay afloat shows just how far we are as a society from properly meeting the needs of survivors. One key challenge is how we can translate the current level of public disquiet into meaningful legislative change – like mandatory reporting – and support for victims.

So if the current wave of public concern is an entirely justified response to recent revelations, does the concept of ‘moral panic’ have any relevance to the debate about child abuse? I would make one point. As we investigate child abuse, and bring the horrors of the past to light, let’s ensure that we do so carefully, patiently and forensically, following evidence at all times.

Tempting though it is, let’s not let conjecture get the better of the facts.  Investigative rigour is not anti-victim; on the contrary, a failure to investigate abuse allegations rigorously can lead to injustices of another kind. I have professional experience of just that.

In 1990, a group of children were taken into care in Rochdale on allegations of involvement in satanic ritual abuse. Torn from their families, their young lives were ripped apart. One of them was then sexually abused in the care home where he was housed supposedly for his own protection. In this particular case, the allegations of ritual abuse were untrue; the removal of those children into care was unwarranted. I know this, not only because the courts reached that conclusion in 1991, but because those children, when they became adults, instructed me to sue Rochdale Council for destroying their young lives on the basis of those false allegations. Those children fell victim to a temporary madness amongst social workers, who ignored hard evidence in favour of wild supposition.

The change in public attitudes since Savile has, at long last, given us the opportunity to expose the true scale of child abuse and right historic wrongs, and bring in legal changes, especially mandatory reporting, to prevent them in the future. It’s a once-in-a-generation opportunity. Those who forget the past are condemned to repeat it, so the best way to protect children in the future is to expose the truth about the many decades of unchecked abuse. That means hard, patient, careful work – and of course a properly resourced public inquiry where survivors feel safe to disclose- to build up a compelling body of evidence so that the truth is clear. Let’s investigate these horrors with care and rigour, and at long last bring the awful truth to light.

Richard is head of the abuse team at Slater & Gordon, and author of Betrayed: The English Catholic Church and the Sex Abuse Crisis, published by Biteback books

Our print magazine is Proof. Contributors include Michael Mansfield QC, Bob Woffinden, David Rose, Eric Allison and Ian Cobain.
Buy Proof Magazine
The latest issue (Why legal aid matters) includes Helena Kennedy QC and Martha Spurrier in conversation, David Conn on the legacy of Hillsborough - plus how to build your own law centre.
Richard is head of the abuse team at Slater & Gordon, and author of Betrayed: The English Catholic Church and the Sex Abuse Crisis, published by Biteback books