#Jamaica50 deportation flight leaves with just four people on board

#Jamaica50 deportation flight leaves with just four people on board 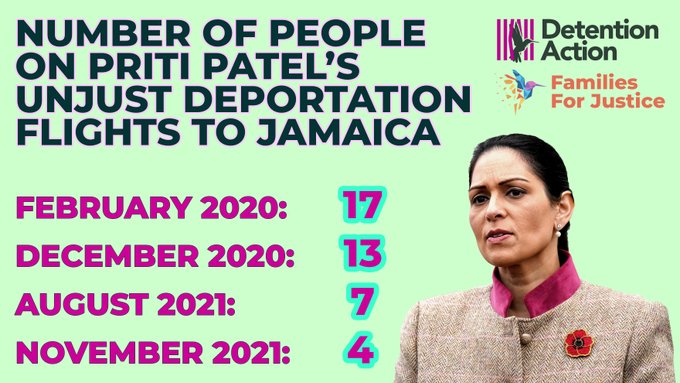 Dozens of people were taken off a deportation flight scheduled to fly to Jamaica yesterday following last-minute legal challenges, including ‘Daniel’ whose story featured on the Justice Gap last week (here).

Home Secretary Priti Patel confirmed as many as two thirds of the 50 people due to be deported were removed from a flight including 13 who successfully challenged their removal within the last 24 hours. Campaigners reckon as few as four people could have been deported on the flight.

Each time the Home Office tries to force Black people from their homes in the UK, they meet more opposition.

This deportation policy is a shambles. With more unjust flights to Somalia and Zimbabwe in the coming weeks, we will keep fighting until it reflects basic human decency. pic.twitter.com/nSiVxicK8Z

Priti Patel said that it was ‘absolutely galling that, yet again, last-minute legal claims have stopped the removal of 33 people, including those guilty of abhorrent crimes such as murder and child sexual offences’. ‘This is why our Nationality and Borders Bill will deliver changes to the law to make it easier to remove foreign criminals and prevent them from gaming the broken system,’ she continued.

According to a report by May Bulman in the Independent, those taken off the flight list included ‘a 23-year-old man who has lived in the UK since he was three months old, and another, aged 29, who has been in the country since he was a year old’. ‘Neither has any memory of Jamaica, and both have been identified as potential county lines victims,’ Bulman wrote. The Home Office also took a man with HIV off the flight list after the Home Office was threatened with legal action over its failure to provide him with life-saving treatment in the detention centre.

A judge halted the deportation of another detainee on Tuesday, raising concerns about the fact that people who had been in the UK since they were under the age of 12 were being deported – despite the fact that the Home Office appeared last year to have a policy of not doing so.

In line with policy change by Home Office allowing for the deportation of non-criminals to Jamaica, a 20-year-old woman with no criminal convictions, who has been in the country since she was 13 and has no relatives in Jamaica, was due to be deported with her mother who also has no convictions. It was reported that bth were taken off the flight list after the Independent covered the story.

‘Daniel’ (not his real name) arrived in the UK in 2002 when he was 14 years old with his mother. ‘I don’t know anyone in Jamaica,’ he told Zaki Sarraf in an interview with the Justice Gap. ‘If I am deported, I do not know who I will go to, or who can help me.” Daniel has a serious heart condition. ‘I am getting treatment for by the NHS. Who will supply me with my medication in Jamaica? Deporting me to Jamaica is like throwing a cat into a lion’s den. How do they expect me to survive?’

On Tuesday, his lawyer Shankhanie Samarakoon emailed us to say he had successfully challenged his removal.

A Home Office source told the Daily Telegraph (in an article headlined Murderers and child sex offenders dodge deportation) that ‘despite having numerous opportunities to raise legal challenges at any stage of the immigration process’, asylum claims were ‘all commonly raised in the last few days before removal by people awaiting return’. ‘These generally lead to release from detention – despite the fact the vast majority do not receive a positive outcome for the applicant when the claim is reviewed.’

According to the campaign group Bail for Immigration Detainees, legal representation in immigration detention has collapsed since the 2013 legal aid cuts. Immediately before the cuts came into force, eight out of 10 detainees had legal representation (79%) and three-quarters of that number were on legal aid. Now it it typically below 50%.

#Jamaica50: Deportation charter flights and access to…
#Jamaica50: ‘My kids are British nationals. Why should they…
Deportation flight to Jamaica leaves for Kingston
#Jamaica50 deportations go ahead nine hours ahead of…
#Jamaica50: 'Our belief about our place in this country has…