Previously unpublished minutes of board meetings at the miscarriage of justice watchdog reveal the extent of happiness at major reforms foisted on the group by the Ministry of Justice.  As has been reported on the Justice Gap (here), the Criminal Cases Review Commission (CCRC) has been forced to undergo fundamental reform at the same time that it faced criticism for a collapse in the number of cases it was sending back to the Court of Appeal.

The cache of CCRC minutes cover the group’s board meetings over the last three years when the number of referrals dramatically collapsed from a 33-a-year average to just a dozen cases in 2016, 19 in 2017 and 13 last year. The minutes, which have been shared with the Justice Gap and Private Eye (see below), reveal the pressures on the group as well as factors contributing to the drop-off in referrals. They also capture fierce resistance from the then commissioners, nearly all have since left, to the proposed changes to their terms.

Ten years ago nearly all the watchdog’s 11 commissioners were on full-time contracts with salaries and pension schemes. Now all but one are employed on a minimum one-day-a-week contracts and paid on a £358 daily rate. A referral needs sign off from three commissioners. According to the September 2018 minutes, the then commissioner Stephen Leach presented a report to the board about ways to ‘mitigate’ the ‘risks’ of reducing commissioner capacity ‘from 7.5 FTE (full-time equivalent) in 2016 to a probable 2.6 FTE in 2019’– in fact, at the end of last year there was just a single commissioner who was full-time equivalent.

Self-serving?
The paper appears to have received little backing from the board. The chief exec took issue with the report’s ‘factual accuracy and assumptions’ (although not, as Leach was reported to point out, it’s ‘core point’ which was commissioner capacity); and non-executive directors complained that board time spent on the subject appeared ‘self-serving’. ‘Commissioners commented that it was not self-serving to try to preserve the commission’s core decision-making capacity on the lines Parliament intended,’ the minutes recorded.

The minutes were obtained under freedom of information legislation by APPEAL and were cited in the ongoing legal challenge on behalf of convicted armed robber who is accusing the Whitehall mandarins of compromising CCRC’s independence. Just before Christmas, Gary Warner, who was sentenced to 16 years in 2011 for conspiracy to rob, received permission to challenge the commission’s rejection of his case on the basis that the Birmingham-based group was not sufficiently free of control from the Ministry of Justice.

‘It is vital that the CCRC has the money and freedom to investigate miscarriages of justice properly so that the wrongfully convicted can access justice,’ comments Emily Bolton, APPEAL’s legal director.  ‘The CCRC’s independence from the Ministry of Justice must be guaranteed, and its commissioners should be on contracts which allow them to develop the skills and experience to fulfil their duties. Otherwise the risk of innocent people being unfairly denied an appeal – and losing extra years of their lives in prison as a result – will remain unacceptably high.’

Former commissioner David Jessel and former chief prosecutor Nazir Afzal previously spoke to the Justice Gap about their concerns about the undermining of the CCRC’s independence (as reported in July last year). ‘The CCRC, and its dedicated staff, have lost some of the sense of mission which full-time Commissioners brought to the organisation’s founding vision,’ Jessel said. ‘The paltry number of successful investigations is the result – although, laughably, the MoJ takes it as proof that the criminal justice system is working well.’

The dispute over the change in commissioners’ tenure has been rumbling on for years. As previously revealed on the Justice Gap, 2016 minutes recorded how the MoJ’s deputy director, Alison Wedge insisted that the CCRC accepted the recommendations of a government review despite concern from commissioners that they would undermine the group’s independence as well as their ability to do their job.

Wedge told the board that the CCRC would be ‘in conflict’ with government policy if they didn’t. The minutes continue: ‘AW said the SoS recommends the appointment of commissioners to HMQ (the Queen) and that similarly he could recommend removal. However, AW hoped that there would be no need for such a situation to arise.’ The following month a commissioner complained that it would be ‘impossible’ to do the job working just one day a week – a view shared by his colleagues.

The following month a commissioner complained that it would be ‘impossible’ to do the job working just one day a week – a view shared by their colleagues. Beleaguered commissioners had previously called on the commission’s immediate past chair Richard Foster for protection and to raise their concerns directly to the minister bypassing the troublesome MoJ officials.

But, apparently, to no avail. ‘The chair cautioned against pushing ministers too hard,’ 2017 minutes record. ‘He asked the board to consider the commission’s weakened position if he wrote to ministers and the ministerial response was not favourable.’ The 2018 minutes reveal that the board is now considering removing the commissioner’s final say on whether to refer cases in less complex cases to case review mangers.

The CCRC was also deeply concerned about its deteriorating relationship with the Court of Appeal, so much so that at the end of 2016, the board ‘agreed that the risk score for OPS/09 (CCRC reputation with the Court of Appeal) should be changed from moderate to severe’. At that time the watchdog was on an unprecedented losing streak with ‘12 of the last 13 judgments’ resulting in convictions being upheld. The board noted that the court as ‘currently constituted might be taking a different approach from previous courts’; and the key issue was ‘whether changes in the courts approach to the commission, if such they were, were part of a wider trend of changes in the courts approach to appeals more generally’.

The Justice Gap called on the CCRC to back a recommendation made by the 2015 House of Commons’ justice committee for the Law Commission to review the Court of Appeal’s grounds for allowing appeals (here).  According to the minutes, whilst it was agreed that the chair should write a letter in support of the campaign, the board ‘felt it was unnecessary’ to look again at the ‘real possibility’ test ‘as any change to the former would carry through into our test given its predictive nature’.

Under its founding statute, the CCRC can only refer cases back to the Appeal judges if it believes there is the real possibility that they will quash a conviction – as a consequence, if the court takes a more restrictive approach to appeals then the CCRC is effectively required to take that into account through the predictive test. 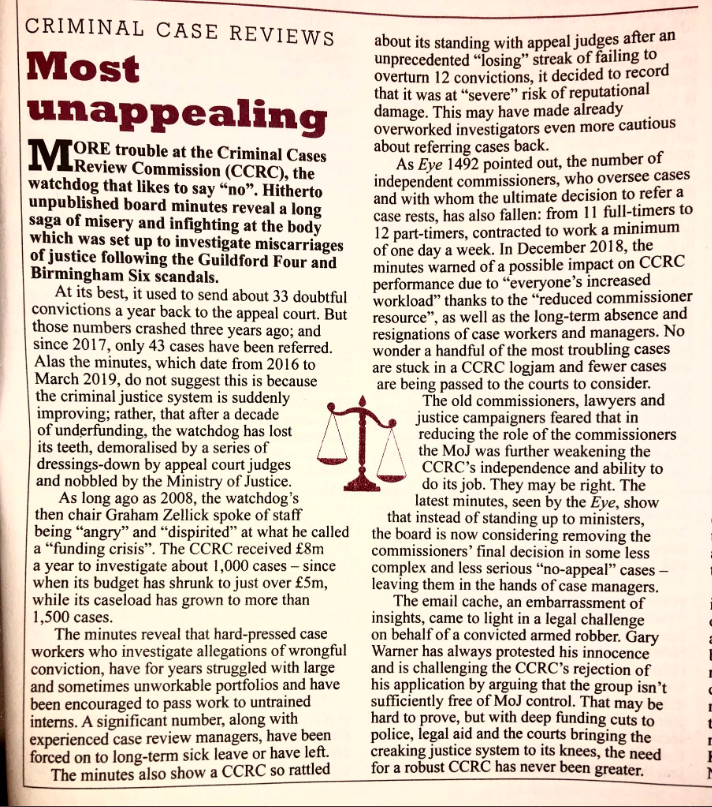 Westminster commission to look at role of the…
Downward trend in number of miscarriage of justice…
One in ten cases sent to Appeal court by miscarriage…
'Ministers bullied justice watchdog', say lawyers
MoJ accused of undermining independence of…