A history of Holloway: the first four decades

A history of Holloway: the first four decades 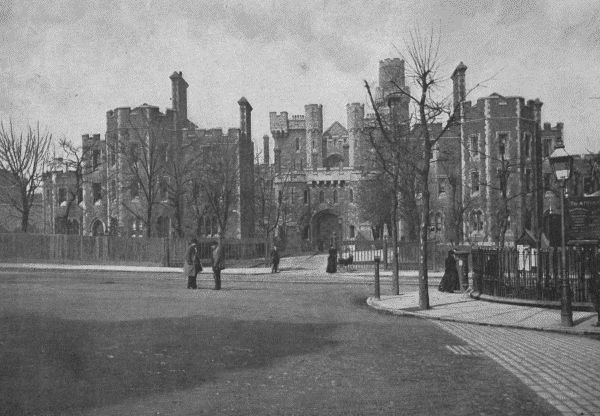 Last week, the first prisoners were removed from HMP Holloway to Downview prison in Surrey. This marked the beginning of the closure of Holloway, announced by the government in November 2015, discontinuing one of the most well-known prisons in the current estate. Despite the prison’s status in popular culture there has been surprisingly little written about the history of Holloway.

Holloway prison was built in 1852 and for the first 50 years was a local prison, the New City of London prison, holding both male and female prisoners. In 1877 all local prisons were centralised and in 1902 Holloway was re-designated as the first female-only local prison.

All the male prisoners were removed to Brixton whilst females held at Wormwood Scrubs were transferred to the site. Many other wings for female prisoners were closed in the early twentieth century and by the 1930s there were only seven female prisons; Holloway was the largest and served the London courts which only increased its significance in the estate. At this time it was also a prison where executions were carried out.

The prison was immediately overcrowded and this did not subside until a new wing was completed in 1906. Before the First World War, Holloway held around 700 prisoners every day but there were around 13,000 admissions every year; many women were sentenced to short periods of imprisonment for minor offences and so there was a high turnover of people going in and coming out.

Conditions in the prison were not that different to the late Victorian period, women laboured in their cells and living conditions were meagre. They worked at the laundry; they did the washing for all prisoners and staff, as well as for Brixton prison. They also sewed the uniforms for officers and for uniforms at Greenwich Hospital, or they made bead-blinds. The daily conditions at Holloway for ordinary women prisoners were highlighted by the accounts of imprisoned suffragettes; many of whom wrote about the oppressive and bleak nature of the regime.

During the First World War, large numbers of women committed to the prison required medical care and there were shortages of medical staff; the prison was under considerable strain. In 1919, Adeline, Duchess of Bedford was asked by the Prison Commissioner, Evelyn Ruggles-Brise to investigate complaints about conditions at the prison. She provided Ruggles-Brise with a direct and critical 64-page report of the conditions and made numerous recommendations in ten different areas; the allegations of verminous and dirty conditions of prisoners discharged after remand, on pregnancy and maternity, on remands, on the treatment of mental defectives, on borstal girls, on medical care and hospital staff, on clothes, bedding and laundry, on the instruction and employment of juvenile adults and first offenders, on venereal disease and its treatment and on staff and administration.

There were also a number of cases highlighted in the media at this time; these were women who had died and their babies had died during childbirth, these cases drew a great deal of attention to the conditions of women who were pregnant and to maternity arrangements at the prison.

From the mid-1920s, the more liberal views of the Prison Commission begin to penetrate Holloway’s walls. However, media reporting of the prison often presented a contradictory view. On the one hand observing the poor conditions, old buildings, lack of opportunities in the regimes, alcoholism amongst women and the old fashioned rules and regulations.

But more positive evidence came in the form of the Holloway Society set up in 1922. Basic support for released prisoners had been offered through Discharged Prisoners Aid Societies but it was often piecemeal. The Holloway Society offered support to women on release from 13 counties and this later expanded to all 16 counties that sent women to the prison. By 1936, each prisoner was interviewed on arrival and offered support with finding employment, housing, reconciliation with family as well as equipping them with clothing, suitcases and money to tide them over until their first wage packet on their release. The scheme was very successful, it helped with rent arrears, furniture, pawnbrokers and aimed to give women a fresh start.

Just before the Second World War evidence of more substantial steps to reorganise and introduce new types of prisons and classifications across the whole prison estate were proposed. In 1937 the Home Secretary revealed ambitious new plans for the prison estate, Pentonville was to be closed; the men from there moved to Holloway and the women at Holloway to be transferred to a new prison camp at Aylesbury. At this time lower security or different types of security prisons were being considered and it was thought that the positive aspects of fresh air and self-respect could reduce women’s reoffending. A number of these proposals were undermined by the outbreak of the Second World War, but as regards women’s imprisonment a new phase of development came in the late 1940s when the ‘open’ prisons of East Sutton Park and Askham Grange were established.

Our print magazine is Proof. Contributors include Michael Mansfield QC, Bob Woffinden, David Rose, Eric Allison and Ian Cobain.
Buy Proof Magazine
The latest issue (Why legal aid matters) includes Helena Kennedy QC and Martha Spurrier in conversation, David Conn on the legacy of Hillsborough - plus how to build your own law centre.
Helen is a senior lecturer in criminology at the University of Hull

UNJUST PODCAST: 'The choice is yours, I choose to be…
Parliamentary Inquiry into women in prison launched…
Old and white prisoners most likely to be treated…
As prisons face their biggest crisis, why are we…
'The pandemic has seen prisons emerging changed -…