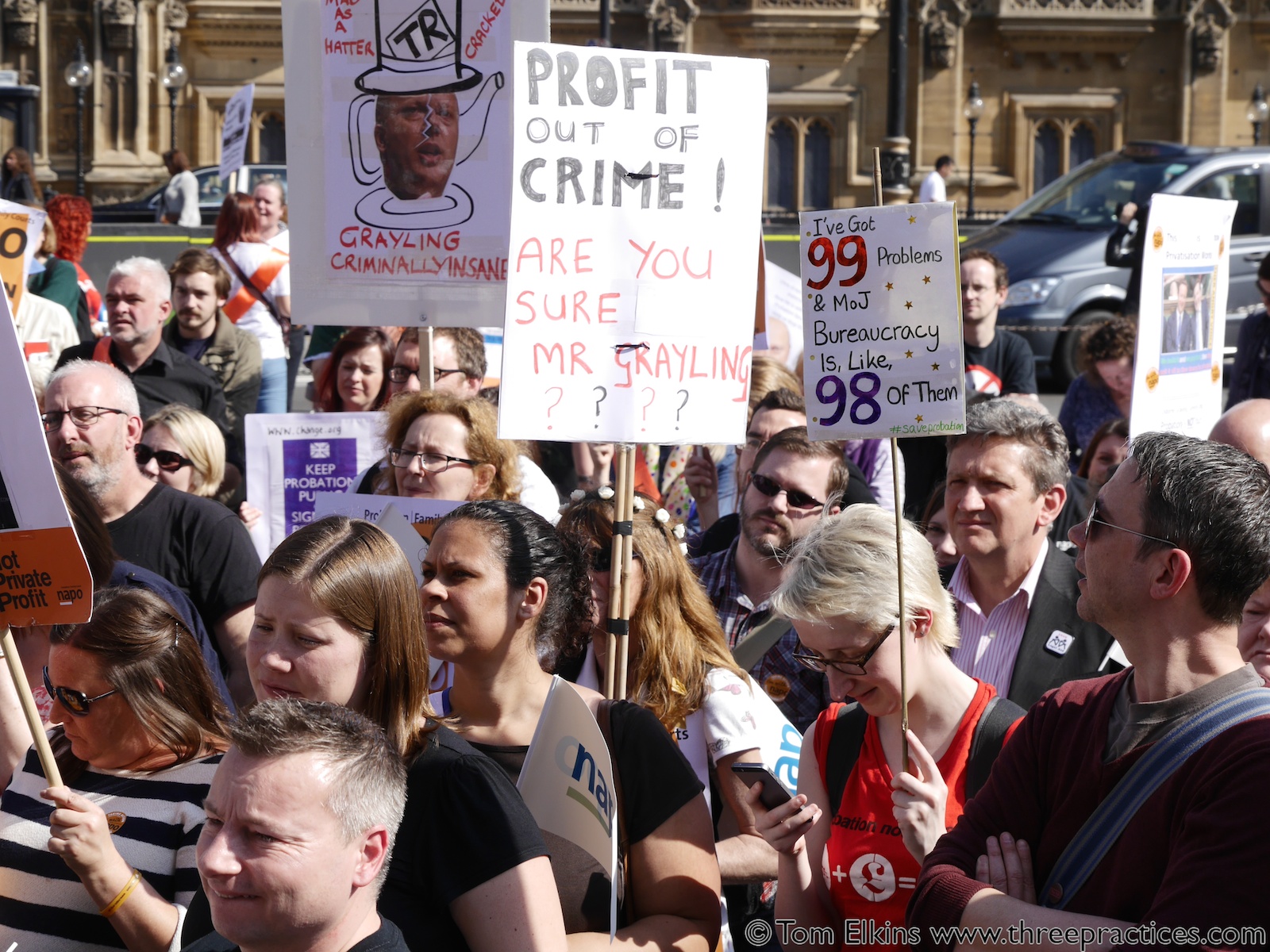 Hundreds of lawyers, probation staff, charities and community groups gathered outside Westminster yesterday in protest against the government’s ongoing cuts to legal aid and plans to privatise the probation service.

The demo – organised by the Justice Alliance and Napo, the probation and family courts union – marked day two of the first joint strike of criminal defence solicitors and probation staff in history.

It also marked the justice secretary, Chris Grayling’s, birthday, April Fool’s Day, and the one year anniversary of the introduction of drastic cuts to civil legal aid contained in the Legal Aid Sentencing and Punishment of Offenders Act (LASPO).

Following the demo, the protestors marched to the Ministry of Justice (MoJ), where representatives from Napo and the Justice Alliance presented Grayling with a birthday card containing messages from the public, and a birthday cake of a grave emblazoned with the words ‘RIP Justice’.

Chants of ‘Grayling, Grayling, Grayling – out, out, out’ and ‘Grayling, you’re failing’ – led by Napo General Secretary Ian Lawrence – became increasingly raucous on the march to the MoJ. The chanting culminated in the crowd singing an alternative rendition of ‘Happy Birthday’ to the Lord Chancellor. Led by BBC 6 Music presenter Tom Robinson, the protestors changed the lyrics to: ‘Happy birthday to you; You want justice for the few; No more justice for the many; Only justice for you’ – much to the MoJ security staff’s amusement.

Slaughter added that the legal aid lawyers and probation staff had the ‘full support’ of the Labour party. ‘You are fighting for fair terms and conditions but you are also fighting for a fair and just legal system that is under threat as never before,’ he said. ‘You can win, and I believe you will win. You have our full support.’

Shadow prisons and probation minister, Jenny Chapman MP, described Grayling’s reforms as ‘reckless’ and said they had been ‘made up as they went along.’

Jeremy Corbyn – Labour MP for Islington North – warned that the number of miscarriages of justice would increase under the government’s reforms and that ‘poor and vulnerable victims of injustice will not get their day in court because there won’t be equal access to justice.’

Corbyn – who also sits on the Justice Select Committee – told the demo that when he asked Grayling questions about legal aid at a committee meeting he responded: ‘The differences between us are ideological.’ ‘For once I agree with him,’ said Corbyn.

Tory dogma
‘No one is immune to needing the help and support of the legal profession,’ said actor and comedian Kate Smurthwaite to the demo. Smurthwaite applauded attendees ‘for not just representing themselves but also the thousands and millions of people who cannot be here because their freedom has been taken away from them.’

Pointing to the houses of parliament across the road, she said: ‘We will not stand for this. Access to justice is a fundamental human right.’

Natalie Bennett, leader of the Green Party, told the demo that they were standing up for a ‘simple principle: the coercive power of the state should never be privatised.‘ ‘If you are taking away someone’s liberty it has to be done under full democratic control by people employed by the state,’ she said.

Jo Stevens, a solicitor at Thompsons Solicitors listed Grayling’s ‘failings’ – including the disastrous Work Programme, which he introduced when he was secretary of state for work and pensions – and said that Grayling was ‘now using his vast experience in failure to wreck our justice system.’

Referring to Grayling as ‘authoritarian and dangerous’ with ‘no debate – just smear and divide and rule,’ Stevens slammed the Liberal Democrats for supporting his ‘Tory dogma’. ‘The yellow Tories across the road are neither liberal nor democratic,’ she said.

Napo general secretary, Ian Lawrence, was similarly scathing of the Liberal Democrats, telling them to ‘wake up and smell the coffee’ and vote the government down because ‘they’ll do it to you in the drop of a hat.’

Dodgy geezer
Pat Waterman, chair of the Greater London branch of Napo told the demo that Grayling is a ‘serious offender’ and warned that ‘we need to stop him.’ Waterman got the loudest cheer of the afternoon when she said: ‘I know dodgy geezers – I’ve been a probation officer for 30 years. Chris Grayling is a dodgy geezer.’

Criminal solicitor and Justice Alliance co-founder, Matt Foot, applauded criminal defence solicitors and probation staff for their display of unity in fighting against the government’s plans to ‘transform’ the legal aid and probation systems.‘We are facing the same enemy,’ said Foot. ‘A man born on 1st April. That must be the explanation.‘

Foot added that it was ‘a perverse time to cut legal aid’, with the imminent inquiry into police spying on the Lawrence family and the opening of the Hillsborough inquest exposing the ongoing ‘disgusting lies’ of the police.

Citing the miscarriages of justice suffered by Gerry Conlon, Paddy Hill, Raphael Rowe, Patrick Maguire and Sam Hallam, Foot said: ‘There will be much more of this coming through the courts if these cuts come in, but they won’t have lawyers to represent them.’

‘This is a time for unity,’ concluded Foot. ‘This is not a time for selfish deals, with people acting in their own self-interest. The struggle for legal aid is not about fees, it is about what kind of society we want to live in.’