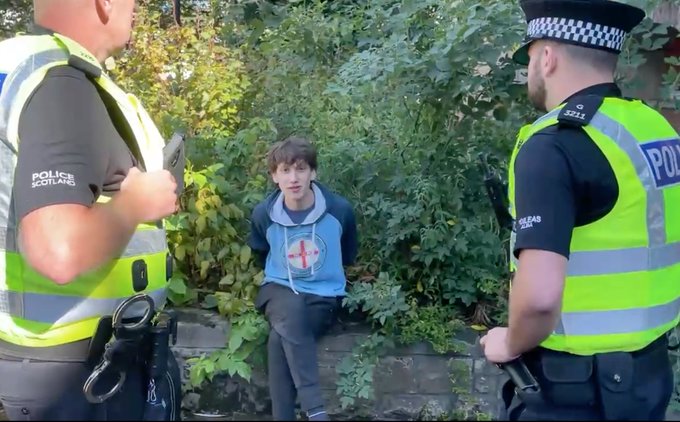 Four people have been arrested across the United Kingdom following protests in the wake of the death of the Queen.

A man was arrested in Oxford for protesting Charles’ ascension. Author and activist Symon Hill said in his own account of events that his arrest was ‘an outrageous assault on democracy’.

Writing on Sunday, Hill said he was led away from the crowd by officers and handcuffed. He alleges they provided no grounds for his arrest, and later said he would be de-arrested but invited for questioning. Human Rights organisation, Liberty, confirmed that a man had been arrested in Oxford under section 5 of the Public Order Act 1986. The Act which an offence of using threatening or abusive words or behaviour that could cause bystanders ‘harassment, alarm or distress.’

Thames Valley Police said a man had subsequently ‘been de-arrested and is engaging with us voluntarily as we investigate a public order offence. On Monday a Barrister, Paul Powlesland, tweeted a video of an apparent exchange with a Metropolitan Police Officer who could be heard telling him that someone might be offended if he were to write ‘not my king’ on the blank piece of paper he was carrying. The lawyer said he was threatened with arrest under the Public Order Act if he proceeded.

Just went to Parliament Square & held up a blank piece of paper. Officer came & asked for my details. He confirmed that if I wrote “Not My King” on it, he would arrest me under the Public Order Act because someone might be offended.

In London, a woman was led away by uniformed officers on Monday after holding up a sign reading ‘Not my king’ close to the palace of Westminster. Police confirmed she was not arrested, simply moved away from the gates to allow vehicles access

Police in Scotland said they had arrested three individuals in Edinburgh relating to breaches of the peace on Sunday and Monday as Queen Elizabeth II’s coffin was transported through the city.

A 22 year old woman was arrested after displaying a sign reading ‘Abolish monarchy’ and ‘F*** imperialism’. A 74 year old man was arrested in a separate incident. Both have been charged with breaching the peace and released, with their cases now pending at Edinburgh Sheriff Court.

A Liberty spokesperson told The Guardian: ‘The number of cases we have seen in the last couple of days comes at a time when the police have just been given a bunch of new powers, which range from being able to impose conditions on public assemblies and moving protests or act in the case of other gatherings which are viewed to have created lots of noise.’

‘Protest is not a gift from the state, it is a fundamental right. Being able to choose what, how, and when we protest is a vital part of a healthy and functioning democracy. It is very worrying to see the police enforcing their broad powers in such a heavy-handed and punitive way to clamp down on free speech and expression.’

A spokesperson for Prime Minister Liz Truss said they would not comment on ‘operational matters for the police’ but added ‘this is a period of national mourning for the vast majority of the country, but the fundamental right to protest remains the keystone of our democracy’.

Journalist arrested at Just Stop Oil protest for 'doing her…
Miscarriage of justice watchdog refers conviction 13 years…
Legal observers arrested at demo against crackdown on the…
Thousands of women pointlessly arrested every year, say MPs
'If Charles had any sense, he'd ask the Met to let…