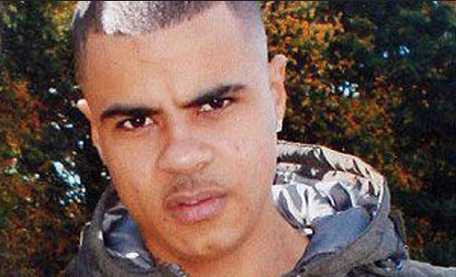 ‘What we want to see is a police officer have his uniform taken off, to be put in the dock and to be tried for murder, just like any one of us would be if we killed somebody,’ said Mark Duggan’s aunt following a public meeting on Sunday. Carole Duggan led a call for a public inquiry into policing in Britain. Speaking to www.thejusticegap.com, she added: ‘Mark was executed and we’re going to fight for as long as it takes to get some form of justice.’

Mark Duggan was shot twice by police after the minicab he was in was stopped by officers on August 4, 2011 in Tottenham, North London. His death is widely viewed to have sparked the worst riots this country has seen in a generation. Duggan’s family reacted with fury when an inquest jury ruled in January 2014 that police acted lawfully when they shot him, even though they concluded he had not been carrying a gun when he was killed.

Whitewash
Following a three-and-a-half-year investigation, the Independent Police Complaints Commission (IPCC) also cleared officers of any wrongdoing over the fatal shooting of Duggan earlier this year, saying it is likely he was in the process of throwing away a handgun when he was shot. Duggan’s family have described the report as a ‘whitewash’ and are now calling for an investigation into Operation Trident, which investigates gun crime in London’s black communities. 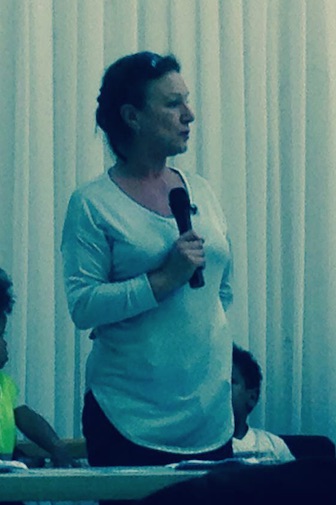 Speaking at a public meeting in Tottenham on Sunday, Carole Duggan said: ‘The family of Mark are calling for a public inquiry into Operation Trident and the tactics used.’ The call for an inquiry was backed by family members of other black men killed in police custody, including Marcia Rigg, whose brother Sean died in 2008, and Janet Alder, whose brother Christopher died in 1998. Duggan added that the families were specifically calling for ‘an independent inquiry – not an investigation of the police by their friends in the toothless Independent Police Corrupt Commission’.

‘A public inquiry is the only way to find out whether or not senior officers from Operation Trident have been colluding with armourers, that they provide protection to, to put guns on to the streets of London, so that they could then arrest those receiving the weapons,’ said Duggan.

The family’s call for a public inquiry follows the recent revelations by investigative journalist David Rose in the Mail on Sunday that the man who gave the gun to Duggan, Kevin Hutchinson-Foster, was known to police and had used the same weapon in another attack just a week before Duggan died. According to Rose, Hutchinson-Foster had in the past faced charges for gun offences himself but the charges were ‘mysteriously dropped’ at the last minute before his trial. When asked why by Rose earlier this year, the Met said it could not comment, while the CPS could not locate its records.

The police’s failure to ‘shut down’ Hutchinson-Foster ‘at best points to catastrophic blunders’, according to Rose, but ‘more darkly, it could be argued they fit a long-held theory: That Hutchinson-Foster was being protected in some way in exchange for being a police informant.’

At the public meeting on Sunday, Rose told attendees that at a meeting of the Hackney CID Guns and Gangs unit two days before Mark Duggan’s death, it was revealed that a man called Kevin had supplied Duggan with a gun. Rather than trying to get the address of the bail hostel where Hutchinson-Foster was residing, the police ‘saw no alternative but to mount an extremely risky armed operation against Duggan, despite intelligence that he had no intention to use the weapon,’ said Rose. No explanation has been provided for the failure of the Met Police intelligence system in the Duggan case, added the journalist.

Rose went on to draw parallels between the Duggan case and the 1989 Hillsborough disaster: ‘It has taken 26 years for the police to admit their lies; their wilful misrepresentations to the media that the media swallowed whole,’ he said. ‘In my 35 years as a reporter, I have seen the state getting more and more secretive,’ he added. ‘There are, unfortunately, conspiracies. But they are hard to uncover because of the steps the police have taken over the years.’

The timing is right
The prominent criminal defence barrister, Courtenay Griffiths QC, backed the Duggan family’s call for a public inquiry but said that it should have a broader remit than Operation Trident.

‘For the first time in memory we have a Tory home secretary in Theresa May who is not afraid to take on the police and in particular the Police Federation. They can’t stand her. The cosy relationship between the Tories and the police, which was cemented by Thatcher in the 1980s as a necessary prerequisite for the assault on trade unions, has now been ruptured.’
Courtenay Griffiths QC

Griffiths added that ‘the timing is right’ to seize the opportunity to demand a judicial inquiry into the police from Theresa May. He called for the Inquiry to cover six points: undercover policing; the protection of informants; the state’s use of the Regulation of Investigatory Powers Act 2000 (RIPA) to carry out electronic surveillance on citizens; deaths in custody; the use of lethal force by police – not just in the case of Mark Duggan – and the independent supervision of police operations which may have an adverse impact on communities.

Suresh Grover, founder of leading anti-racist charity the Southall Monitoring Group, warned the public meeting that we are living in ‘dangerous times’, with over 3,000 deaths in custody in the UK since the 1960s. ‘All gains made in the Stephen Lawrence report to confront police and state racism have vanished into thin air,’ he said. ‘We do not have a police force in this country that can be trusted to protect black lives.’

The Duggan case is ‘pivotal’, added Grover. ‘The police say that Duggan doesn’t matter, because he has been vilified. Tottenham has been vilified since 1985. We have to win this campaign. If we do, the dam will open to protect others like Mark Duggan.’

Speaking after the meeting, Carole Duggan told www.thejusticegap.com that real justice for her nephew could only come in the form of ‘a police officer being held accountable for his actions and paying the price for his actions’. She added: ‘That will set a precedent and it will also put trust – more trust – in the people for the police.’

Duggan added that the family are not just fighting for justice for Mark, but for the families of all of the deaths in custody ‘who have not had the voice that we have been lucky to have because of the uprising after Mark’s death’.

‘[The police] say they want to work in communities; they say they want to work with us,’ she said. ‘Murdering our families and loved ones is not working with us: that is working against us and we will not tolerate it. We do not want Americanised policing in Britain. We are the people; we pay our taxes for their service, not their force. ‘

'Little faith' in spy cops inquiry getting to truth
Episode 11: 'This inquiry is pandering to the police'
One in three police forces refer allegations of…
Fast-track injustice and the 'racist-effect' on the…
'Shameful and inexcusable': No public inquiry into…