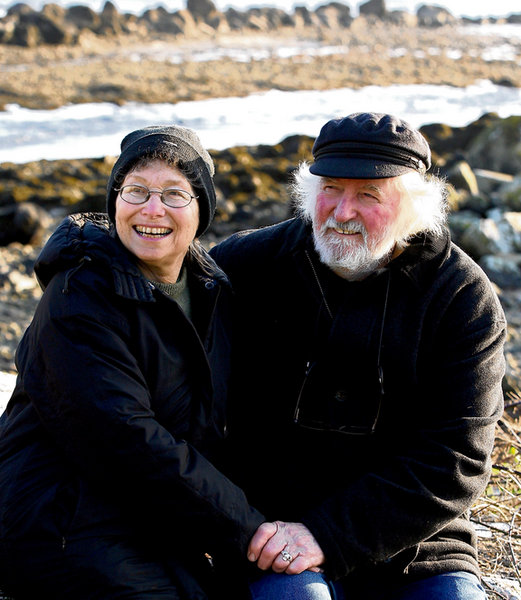 Tucked away among the rugged cliffs of Galway, Ireland, lies the meeting point of two remarkable lives. Sunny Jacobs and Peter Pringle spent collectively 32 years on death row for crimes they did not commit. Away from the peaceful tasks of tending animals, collecting eggs and making homemade cheese, the spectres of their pasts occasionally revisit them.

‘I remember listening to three guards discussing what role they might play in my hanging,’ says Peter, who spent 15 years inside Ireland’s ‘Death Cell’ awaiting execution after being wrongfully convicted of killing two Irish police officers in 1980. ‘They came to the conclusion that two jailers would have to be underneath the gallows so that when my body came down through the trap door, each one would pull on a leg so that my neck would be broken. This was said in my presence as if I didn’t exist, as if I wasn’t a human being. It personifies for me the inhumanity of the death sentence.’

Though Ireland abolished the death penalty in 1990, capital punishment remains a live issue in the United States, where 1,414 individuals have been executed since 1976 and 31 states presently retain the death penalty. As of 1 April 2015,3002 inmates await execution.

Wrong place, wrong time
Sunny Jacobs experienced the full trauma of wrongful conviction and incarceration in solitary confinement on Florida’s Death Row. Like Peter, she too was accused of murdering two police officers, after finding herself ‘in the wrong place, at the wrong time’ whilst driving with her boyfriend, Jesse Tafero, and their two children, Eric, then aged nine years and Cristina, aged 10 months.

When their car broke down, Jesse arranged for an acquaintance, Walter Rhodes, to come and take the family home. After stopping in a lay-by, Sunny awoke to find a police officer tapping on the window demanding ID from Rhodes. When none was forthcoming, the scene turned ugly and shots began to fly. Sunny ducked down in the backseat with her children.

Her mere presence at the scene was enough to convict Sunny of the capital murders of both police officers. Despite a jury sentencing her ‘only’ to life in prison without the possibility of parole, the judge overruled this verdict and imposed his own death sentence using his privilege of ‘judicial override’.

At the age of 28, Sunny found herself locked up in solitary confinement in one of the worst death row prisons in America, having never before been in trouble with the law.

Perhaps most bizarrely, her nine-year-old son, who had been with her in the car on the night of the shooting, was placed in isolation in a juvenile detention prison.

‘It took my parents two months to finally convince the judge that there was no reason to imprison this child and to have him released to his grandparents,’ says Sunny. ‘It’s left him with emotional difficulties, stuttering, he has difficulty getting jobs now and he’s almost 50 years old. It upsets me because I know it’s because of that trauma. It was terrible.’

What was the worst part about being labelled a criminal and put on death row?

‘When I first went into the prison, I had never experienced being hated before,’ says Sunny. ‘But the guards – they hated me. They thought I was responsible for the killing of two of their comrades, so even though they weren’t allowed to speak to me, when they would come the hatred was palpable, you could feel it. And there was nothing I could do about that. It’s a terrible thing to be hated.’

Sunny spent 17 years on death row before finally being released. She went on to suffer many more painful experiences, including the death of her parents in a plane crash and the botched execution of her husband Jesse in the electric chair, an experience so horrific that when her 15-year-old daughter heard that her father had been burnt alive, she tried to kill herself.

Despite weathering such storms, life for both Sunny and Peter took a decidedly upward turn when they coincidentally ran into each other in 1998 after their exonerations. Sunny was speaking at an Amnesty International event in Galway, when Peter was encouraged by a friend to go along.

‘What does this woman know about death row,’ thought Peter. Yet after a few moments, sitting in the front row, Peter became mesmerised by Sunny’s story and the uncanny similarities it bore to his own, including the fact that both had used yoga and meditation to overcome their anger and bitterness whilst in prison.

Soon after their initial meeting, the couple fell madly in love and married, aged 64 and 73. ‘We decided that all we need to marry is us, and God, and a couple of witnesses. So we brought our dogs to the beach.’

‘On the winter solstice,’ Peter adds, ‘the darkest day of the year. We got engaged in the morning and married in evening.’

The couple went on to formally marry in New York. 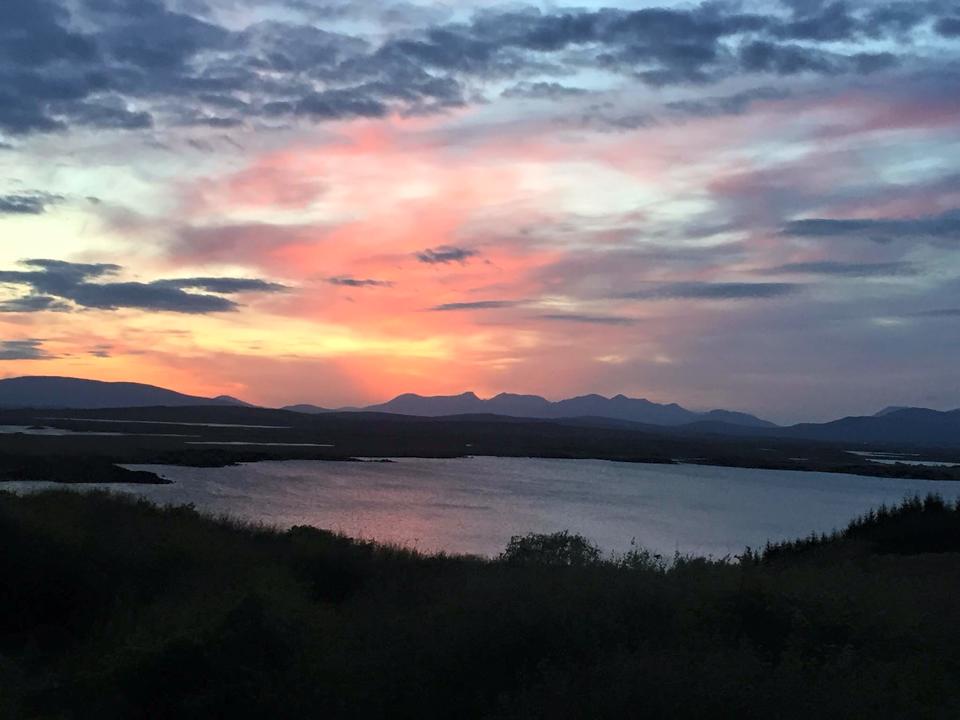 The view from the Sunny Centre

An embarrassment to the authorities
When asked if, were they able to go back in time, would they change what happened? Peter replies: ‘Well, I wouldn’t recommend anyone go to prison and be sentenced to death. I’d rather that didn’t happen. But have I gained from it? Yes I have.’

‘From the experiences I had, I gravitated towards a certain way of being and behaving which was peaceful, towards healing and reconciliation, rather than bitterness or negativity. And this wonderful woman came into my life and we’ve been together ever since. I live a great life. I love it.
Peter Pringle

Sunny considers the same question. ‘I’ve thought about that. Though I wouldn’t have wanted any of that to happen, I wouldn’t trade it because of the gift that has come out of it. It has put us in a very unique position to do good.’

Since being released and recovering from their experiences, Sunny and Peter have devoted their time to hosting other exonerees at their home in Galway in a bid to alleviate the harsh reality of readjustment into society for newly released exonerees.

‘There is absolutely no support whatsoever for people coming out of prison after a wrongful conviction,’ says Peter. ‘We are nothing but an embarrassment to the authorities who want nothing more to do with us.’

The plight of Victor Nealon resonates with the couple; Nealon spent 17 years in prison after being accused of rape. His conviction was overturned by the Court of Appeal after forensic evidence revealed the presence of another man’s DNA on the victim. ‘Nealon spent the first night of his liberty sleeping on the street. That was his new free life,’ says Peter.

‘When I was released from the court onto the street, I had no money, no job, no place to live. I had no driving license, no passport, I didn’t even have a social security number. They had computerised the system after I went into prison and they didn’t put my name into it.’

Peter was released on May 17 1995 after his conviction was overturned by the Irish Criminal Court of Appeal. It was found that the police evidence against him was fabricated, but a technicality in the law has meant that he has received no compensation for the state’s almost fatal error. This led him to seek redress in the civil courts, though 20 years later, his case has still not been heard. ‘When you have no money, you are not a priority—it’s as simple as that,’ says Peter. ‘That’s the nature of the law.’

Fear and forgiveness
‘When a person gets out it is really difficult for them to mingle in society, to converse with people when their only terms of reference are from prison, where they’ve been for 20, 30 years. The outside conversations are meaningless,’ says Peter. ‘When I came out people were talking about TV, movies, celebrities, but I didn’t get to watch TV, I didn’t know anything about them. It was all totally new to me—I was like an alien in society.’

‘And the stigma remains,’ says Sunny, ‘particularly for women. Everybody doesn’t believe you’re innocent just because the State says so. They think you got away with it. People think that once you are free your troubles are over, that’s what I thought—but when you get out, your troubles are just beginning.’

‘I think the death penalty still exists because the powers that be generate fear in the community and convince people that the only way to protect them is to kill the killers,’ says Peter. ‘And unless it affects you or someone that you know, it’s difficult for people in America to become interested in the death penalty, it’s an abstract thing. If something terrible happens they think, “they deserve to be killed”. It’s  a gut reaction without any logic to it.’

‘If you look at a map of America,’ adds Sunny, ‘and you superimpose a map of the states that had slavery with states that maintain the death penalty, for the most parts it’s the same; it’s in states where it’s ok to differentiate between the value of one life over another.’

‘We are locking up a whole generation of children and criminalising them, when instead we should be helping them to see a better way—if you criminalise them, what are you going to have? More criminals! It’s an insane way of doing things. Revenge has become more important than having a better society.’
Sunny Taylor
‘I still have difficulty forgiving,’ says Sunny. ‘It’s not something you just think: “Ok, I’m finished forgiving now.” It’s kind of like a virus, it keeps coming back. But the first time is always the worst. And then it’s not quite as bad. That’s what forgiveness is, it’s a process.’

Sunny’s book about her experiences, Stolen Time and Peter’s book, About time: Surviving Ireland’s Death Row, can be found here.

The Sunny Center provides a peaceful environment for exonerees and their families to readjust to life on the outside. ‘It is a unique thing that we have had to overcome,’ says Sunny, ‘and we realised that we have to share our experiences because the main thing for people is the lack of connection when they first get out.’

'I went to prison an innocent kid. I became violent.…
Race, injustice, and innocence on death row:…
Inquest to look at suicides HMP Durham following…
Failings contributed to the death of a prisoner with…
Clinton Young: The lethal price of an unfair trial