Debbie Destiny and the danger of encouraging false allegations

Debbie Destiny and the danger of encouraging false allegations 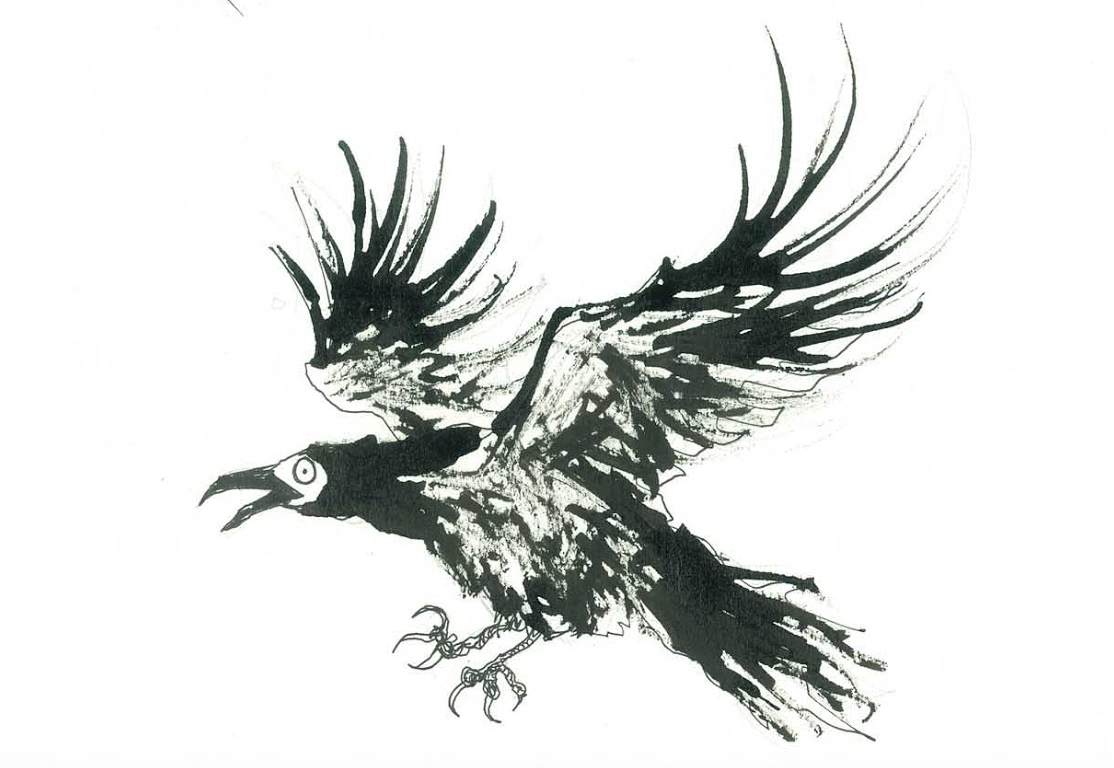 Who is Debbie Destiny? A smiling plus-sized woman with a regular column in ‘that’s life’ magazine. According to this week’s issue, Debbie ‘contacts your loved ones in the spirit world to solve your problems (Issue 24, page 43) . A text box announces that ‘you suppressed the memories’. I am intrigued to find out more.

Elaine, 48, has asked for Debbie’s advice. Elaine’s father died when she was 12. She was always afraid of him, and he’s now trying to reach out to her in her dreams, but no sound comes out when he opens his mouth.

As she reads Elaine’s letter, she sees images of a black crow. This tells Debbie that Elaine’s father has a dark secret that he took to the grave. She sees him depicted as a demon. ‘I have a vision of you being woken by your father. You’re terrified as he overpowers you and holds you down.’ ‘Elaine, your father stole your innocence and abused you’, is the dramatic wholly un-evidenced and nonsensically-reasoned conclusion she reaches.

‘Understandably you buried these memories. But now, your father in-spirit is trying to confess to the evil acts he committed against you as a child…. Seek counselling to release you from your past.’

Elaine is grateful to Debbie:

‘I always wondered if I repressed memories about my dad, as I could never explain why I feared him so much. I’m glad you’ve told me the truth. Now I can deal with my past.’

It’s just as well that Elaine’s dad is dead. If he was still alive, he may now be facing criminal proceedings based on such unfounded fantasy, which may well have led Elaine down a path of recovered/false memory syndrome. 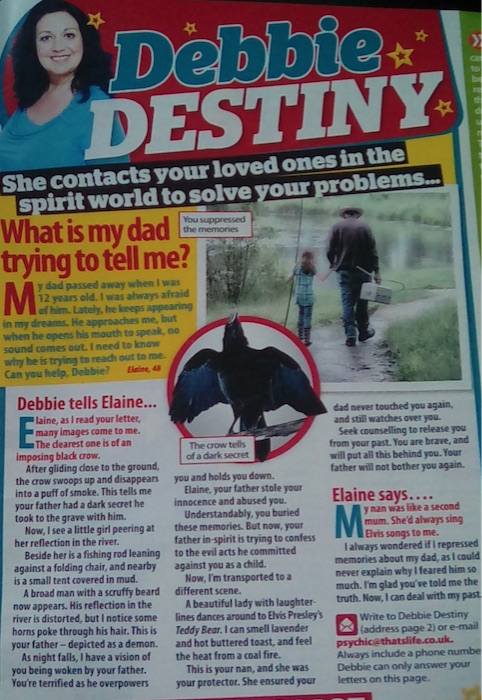 False allegations
We’ve been hearing a lot about false allegations again recently with the news that no charges are to be brought against Sir Cliff Richard. We’re hearing again about the distress to those publicly yet falsely accused, anonymity for complainants, and inexcusable delays in making charging decisions.

There are calls from support groups (such as FACT – Falsely Accused Carers and Teachers, and FASO – Falsely Accused Support Organisation) to remember those who are not famous, but who suffer equally. But what we’re still not seeing is a plethora of news items exposing the awful effect of false allegations upon ordinary families. Nor are we seeing urgent calls for a review of the part that compensation for ‘victims’ plays in all this.

Furthermore, research has documented that there is a danger of implantation of false memories. At the May 2015 FACT Conference, Felicity Goodyear Smith, academic head of the department for general practice and primary healthcare at the University of Auckland, discussed the very real dangers of how false memories can become incorporated into memory (here). She explained how in the late 1980s and 1990s, there was widespread use of ‘memory recovery techniques’ by counsellors and psychotherapists.

She explained: ‘These hypnosis-like methods create an uncritical, explorative state of mind which can lead to the generation of false memories along with an increased confidence that these were real events.’ Goodyear Smith explained that there is a substantial and robust amount of research which indicates there is a propensity of memory recovery to create sincerely believed-in pseudomemories.

This demonstrates the dangers that such ideas can have in creating false allegations. And the utmost care should be taken to avoid this by all of those who engage in giving advice, whether in a seemingly harmless magazine column or in a doctor’s office.

Our innocence project is far from alone in receiving increasing numbers of calls for help from people alleging they have been wrongfully convicted of historical sexual abuse. They may well have been, but they have very little chance of successfully appealing convictions because of the way our system operates. Cliff Richard had a dreadful experience, but he is ‘lucky’ that he could afford legal help. Ordinary people, as well as famous ones, can be convicted on the flimsiest of evidence, often just the word of the complainant, because the jury believed their accuser, not them. This takes place in an adversarial court setting that is a contest between two opposing sides, rather than a truth-finding tribunal. With little if any legal aid, inequality of arms is a fact.

Real life stories – or a joke?
What sort of person would seek advice from this magazine that has been in publication for two decades? Its target is ‘young, mass market women with children’. It claims a circulation of 230,731, an adult readership of 423,000 and a female readership of 401,000. That is a lot of people who may potentially be influenced by this sort of rubbish that masquerades as ‘advice’.

In this landscape of moral panic, magazine editors need to be alive to the reality of false allegations, which are toxic and hugely damaging – anything that might plant even a small seed that could germinate into such allegation is to be discouraged.

It may, of course, be that this ‘letter’ was fictitious, and Elaine and her problem don’t exist. The publishing house website reveals that this magazine contains: ‘Real life stories combined with classic women’s weekly editorial and a real sense of humour’. Is Debbie Destiny meant to be a comedian? If so, it’s really not funny and raises a real danger of being taken seriously by vulnerable people.

Editors – if you’re not already doing it, why don’t you please feature some stories from people who have been victims of false allegations, and make an ethical decision to vet more closely what is emanating from the pages of your glossies as potentially dangerous advice?

So why did I read this rubbish in the first place?

In my defence, two hours hot incarceration on the Gatwick tarmac – ironically, en route to a conference to discuss among other things false allegations of historical sexual abuse – forced the hand of my learned colleague, Dr Dennis Eady, and me. Having jointly memorised the safety evacuation procedures of a Boeing 737 and all duty free offers but still not skybound, with embarrassment we shared a glossy magazine with our PhD student, Holly Greenwood. ‘In the interests of research’, she confesses to having invested 74 pence in this arguably questionable piece of reading material. We were variously amused and shocked by the headlines – ‘Mum gave me a designer vagina’, ‘Win a weekend with Justin Bieber’ etc. I decided, setting aside any feelings of intellectual snobbery, that some of these articles may well have merit if accurate, for example those that exposed real life horror stories.

But when we stumbled across Debbie Destiny, who also charges for private psychic sessions, we were taken aback. Obviously, at times of vulnerability and bereavement some people seek solace from sources that others of us consider dubious at best. But when such ‘advice’ is printed in a national magazine, that must give rise to ethical responsibility issues for editors.

I have no plans to read any more of these glossies any time soon, so I’m not going to get a feel for the extent of any similar irresponsible pieces that are “out there”. In the meantime, I am of course going to write to the editor of ‘that’s life’ seeking her urgent views on this.

We will keep you posted.