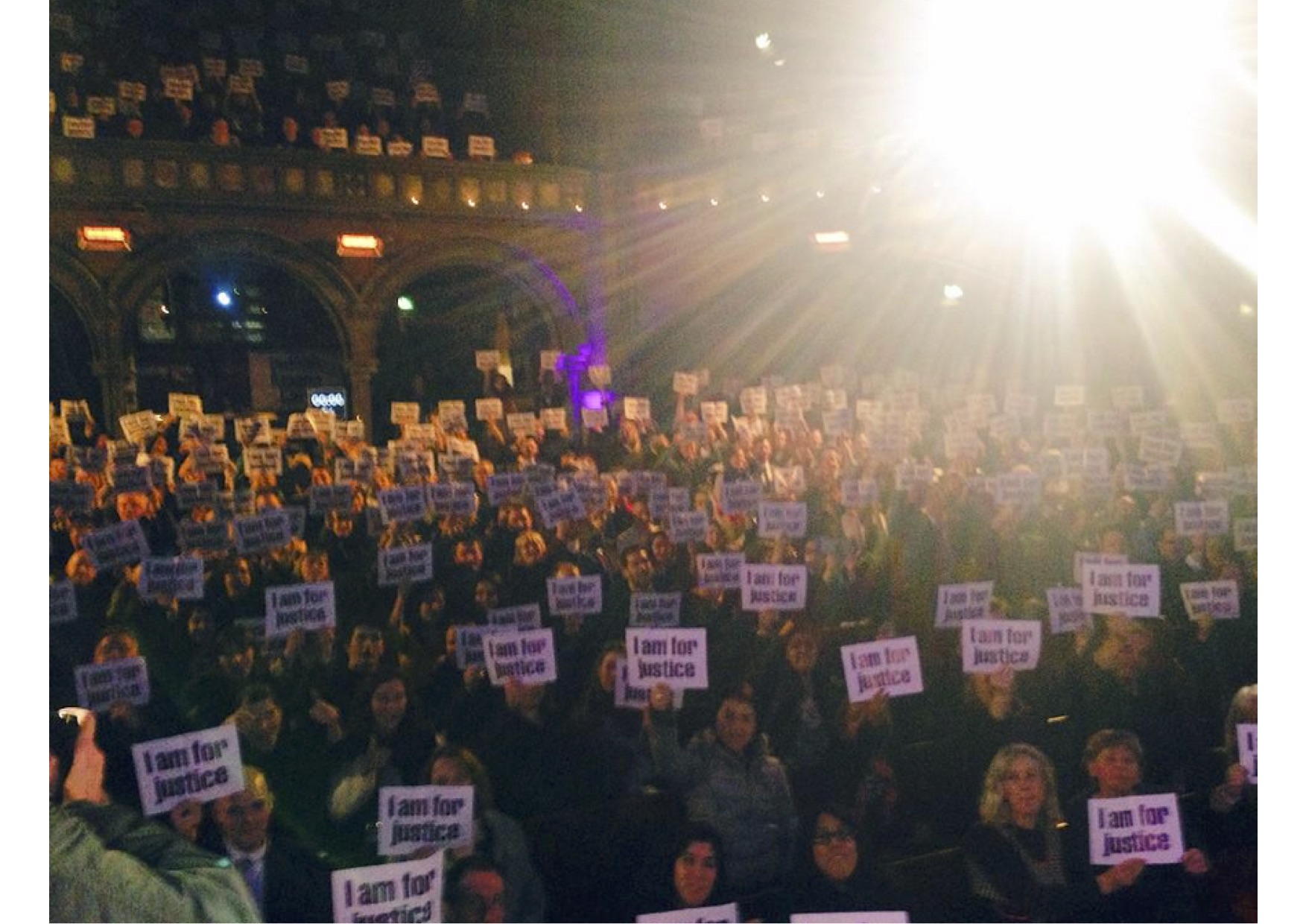 Stand up for justice: Pic by Mary-Rachel McCabe from stage of the Union Chapel at 'Not the global law summit'

Stand up for justice: Pic by Mary-Rachel McCabe from stage of the Union Chapel at ‘Not the global law summit’

In the weeks leading up to the government’s prestigious Global Law Summit, the ‘improper, revolting and dreadfully conceived enterprise’ to (prematurely) celebrate the 800th anniversary of Magna Carta, there was finally some good news from the courts for the Lord Chancellor, Chris Grayling, in the form of two judgments upholding the legality of controversial legal aid reforms.

The extensive programme of legal aid and justice reform presided over by Grayling and his predecessor in the Ministry of Justice, Ken Clarke, has to an extent been impeded during the last year by a succession of defeats in judicial review cases. The Lord Chancellor has been ruled to have acted unlawfully in challenges concerning the prison book ban, the residence test, funding for mesothelioma cases, exceptional funding guidance for immigration cases and criminal legal aid.

However, the government’s losing streak in the administrative court ended in January, when the court rejected a challenge by Rights of Women to the lawfulness of regulations which set out the evidence of domestic violence required in support of an application for legal aid in family law cases. The court also recently upheld a decision by the Lord Chancellor to make ‘profound changes’ to criminal legal aid by restricting the number of duty contracts for police station work to 527.

Rights of Women: evidence of domestic violence
The Legal Aid, Sentencing and Punishment of Offenders Act 2012 (‘LASPO’) explicitly removed a number of areas of law from the scope of legal aid, including private family law proceedings. However, the government sought to preserve legal aid for victims of domestic violence seeking protective court orders or faced with the prospect of representing themselves against their abuser.

The specified types of supporting evidence required from applicants for legal aid in such cases to demonstrate that they had been victims of domestic violence were set out the Civil Legal Aid (Procedure) Regulations 2012, secondary legislation made under LASPO. This evidence included, for example, relevant unspent convictions, police cautions, injunctions and letters from health professionals, social services departments or domestic violence refuges. Any such evidence of domestic violence must be within 24 months of the application for legal aid.

Rights of Women, a charity which focuses on violence against women, sought to challenge the regulations on the basis that the inflexible evidence criteria frustrate the purpose of preserving legal aid for victims of domestic violence by imposing requirements which are too rigid and narrow, thus wrongly excluding women who should be eligible for legal aid.

The court acknowledged that Rights of Women provided ‘a considerable volume of evidence in support of its contention that the evidential requirements … were wrongly excluding genuine victims of domestic violence from obtaining legal aid’. In doing so, it had shown ‘a good arguable case that some victims of serious domestic violence, who are genuinely in need of legal aid’ could not fulfil the evidential requirements to obtain it.

However, the challenge failed because the court concluded that the power to set evidential requirements in the form of regulations was envisaged by Parliament when it passed LASPO. The case was ‘a challenge to the manner in which the scope of the power has been exercised, not the scope of the power’. While the Lord Chancellor had ‘adopted a set of prescriptive and inflexible evidential requirements’ which ‘may well exclude meritorious applications’, there were legitimate reasons for adopting this approach and, while it may not be operating effectively in practice, its faults do not go so far as to thwart or frustrate the purpose of LASPO.

Following that judgment, the Ministry of Justice carried out a further consultation to rectify the mistakes identified by the court. In November 2014, when it came to deciding how many duty contracts should be offered after the re-consultation, the Lord Chancellor decided to increase the number from 525 to 527. Given that around 1,600 firms can currently conduct duty work in police stations, this decision has potentially devastating consequences for many criminal law firms and solicitors.

The Law Society decided to challenge the Lord Chancellor’s decision, as did the professional bodies representing criminal solicitors, the Criminal Law Solicitors Association and the London Criminal Courts Solicitors Association, in conjunction with two criminal firms. The separate applications for judicial review were joined and heard together by the Administrative Court in January.
The claimants argued that, in reaching his decision, the Lord Chancellor had breached his duty to ‘ask himself the right question and take reasonable steps to acquaint himself with the relevant information to enable him to answer it correctly’. In their view, the decision had therefore been unfairly arrived at and was unreasonable.

The Lord Chancellor’s decision was based in part on a report commissioned from KPMG. The figure of 527 duty contracts was derived from a model developed by KPMG, which itself relied on a number of contested assumptions concerning how firms could and would respond to the new criminal legal aid market.

The court dismissed the claimants’ arguments, finding that they were urging on the court a ‘what if? scenario’ premised on an assumption that the new scheme will go badly wrong. Lord Justice Laws, giving the leading judgment, repeatedly stated the ‘important truth’ that ‘professionals whose world has changed may look the new world in the eye and find the means to live with it’. That is to say, the court found that ultimately, criminal firms will adapt to the decision made by the Lord Chancellor – which he was entitled within his discretion to make – and find a way to work within the new legal aid contracts.

Next stop: Court of Appeal and court of public opinion?
The claimants in both cases are seeking to appeal the judgments to the Court of Appeal, so this may not be the final word on criminal legal aid contracts or evidence requirements for victims of domestic violence. The political context is also relevant, as Labour have pledged not to introduce the dual contract system if they form a majority government after the general election in May.

Note: The Court of Appeal has just allowed defence lawyers permission to appeal (here). It will be heard on 10 and 11 March.