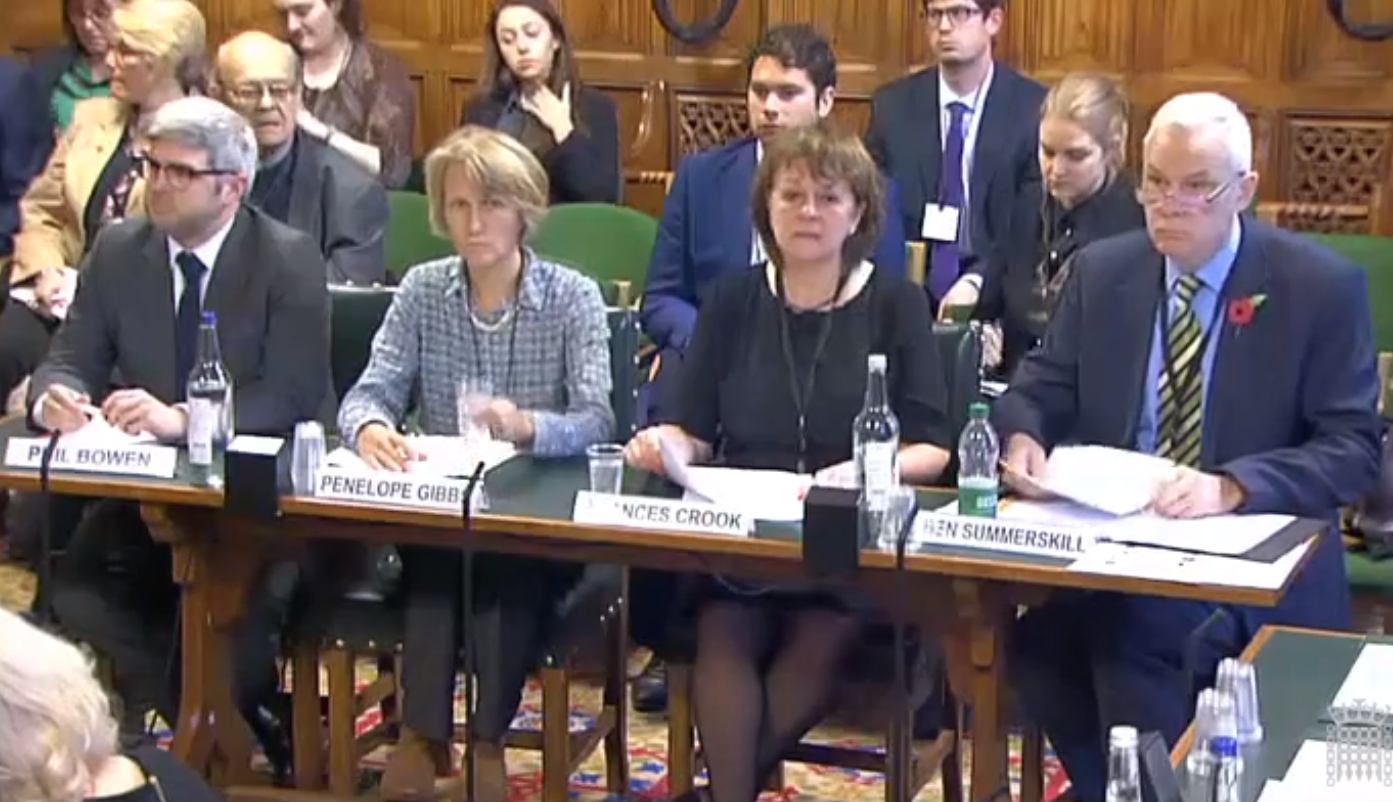 The criminal court charge is endangering the fundamental right to a fair trial and leading the UK towards a US-style system of plea bargaining, the House of Commons’ justice select committee has been told.

Representatives from the Howard League for Penal Reform, Transform Justice, the Centre for Justice Innovation and The Criminal Justice Alliance appeared before the House of Commons justice committee to give evidence to its inquiry into the effects of the extra charge on convicted people. The witnesses warned of the danger of the controversial charge—which was introduced in haste and without consultation this April in an effort to make those who commit crime ‘pay their way’—leading innocent people to plead guilty in order to avoid higher fees.

Phil Bowen, director of the Centre for Justice Innovation warned the committee that any system which introduces an element of ‘plea bargaining’ will convince some people to seek a ‘better deal’.

‘[I’ve seen] innocent people with two or three convictions behind them who went “actually on this I’m innocent, but what’s the point as the system is loaded against me”. There are aspects of the criminal court charge which are like that.’

Bowen said that there was a risk of a defendant’s right to a fair trial being undermined under the charge regime. ‘I don’t believe you should be charged for using the courts whether you are guilty or not. How can you have a fair trial if you have a cost on it?’ He questioned the use of the charge as a source of revenue for the courts, saying: ‘We don’t ask for the accused to pay for their arrest or prison place.’

One case too many
When asked, Howard League chief executive Frances Crook said that she would never oppose fines if they were appropriate and used when offenders could afford them; however, she went on to say: ‘Understanding justice is important. It needs to be seen to be fair. There is a sense of resentment that [the criminal court charge] is not fair.’

Crook went on to decry the ‘medieval’ justice system which recently saw a homeless teenager handed a £150 charge at Swansea Magistrates Court for begging on the street – an offence he was not even aware he was committing. ‘We have a medieval justice system and we are just piling stuff on top. We need fundamental reform of the lower courts.’

The suggestion was made by one of the members of the panel, Philip Davies, MP for Shipley, that evidence was being exaggerated in order to over state the effects of the charge. Davies claimed that the evidence basis for innocent people wrongly convicted was ‘one case’—a suggestion Criminal Justice Alliance director Ben Summerskill replied: ‘It is a case we regard as reliable and I have to say, given my personal view of the importance of confidence in British justice, one case of someone pleading guilty to something they didn’t do is, with respect, one case too many.’

Davies also accused some of the groups of struggling to ‘differentiate between personal and political opinions and evidence’. In questioning the suggestion by Frances Crook that a proportion of those subject to the charge have been beggars convicted of minor crimes, Davies claimed: ‘You have no idea, you just made that up to be emotional.’

‘Slippery slope’
Penelope Gibbs of Transform Justice drew parallels between the courts charge and the recent race riots in Ferguson, Missouri. ‘Court fines and charges were unfair. Law and enforcement practices were focused on revenue rather than public safety. It is a slippery slope if courts are seen as a revenue stream.’

Referencing the increase in the number of unrepresented defendants in the courts, Gibbs said: ‘To pile on a financial complicating matter to people who are already totally at sea trying to represent themselves does threaten justice.’

When questioned by the committee about what should happen to the controversial charge, the witnesses were unequivocal: ‘It needs to go’ was Frances Crook’s opinion; ‘We need to suspend it immediately and work out how to abolish it.’ Penelope Gibbs agreed, saying: ‘We need to abolish it and find the resources elsewhere. If you are going to keep it then you need some discretion.’ Phil Bowen added: ‘There are other ways the courts can generate revenues by collecting monies already owed to it. That is where the energy should be. It seems odd to create a new revenue source.’