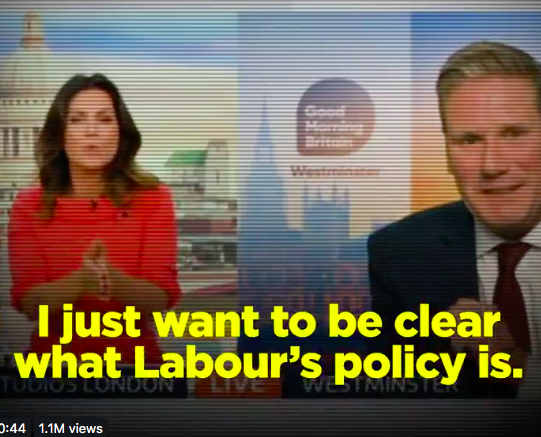 The opening rounds of this winter election have seen the Tories seemingly decide that the best route back to No. 10, ideally complete with a hefty Commons majority, is outright deception.  They have manipulated videos, invented manifestos and promulgated half-truths, whilst Labour have returned to their Blairite tendencies, preferring obfuscation and misdirection ahead of clarity, trying to, Janus-like, face in both directions with their policies, depending on who they are talking to.

Duplicity is, to some degree, integral to politics.  Disaster and misfortune affects even the most successful of parties and campaigns, and whilst an acknowledgement of failure may on occasion be appreciated by the electorate, it’s easy to see how such admissions, too frequently made, can shift the public’s perceptions of a party. To err once is human, to err perpetually is problematic. The difficulties, however, come when the parties no longer, however, view spin as a shield, used to react to circumstance, but as a sword, to be unsheathed at will.

Lies, or at least deliberate half-truths, became ubiquitous during the referendum, when the Brexiters realised that the anodyne reality of honesty was unlikely to excite the ire of voters enough for them to vote for constitutional upheaval.  Dishonesty about the cost of EU membership, the risks of Turkey joining the EU, or any future loss of sovereignty was necessary to sell the deception.  Without such deceit, the campaign would have barely got going, the lies needed to buy in to the game.

What this seems to have done, however, is inoculated the Conservatives against any inhibitions they may previously had over manipulating the truth.  Presented with an interview of Keir Starmer that already showed the difficulties with Labour’s Brexit position, the reaction of the Conservative’s social media team was not to clip it, add some text, and stick it on twitter, but to blatantly doctor it. This was done for no great reason, other than the fact that the media team presumably thought a policy Labour seemed unable to explain was more damaging than a policy that was incoherent.

After this, the Conservatives were off to the races, beneficently making up an entire manifesto for the Labour Party, and calculating how much their ‘policies’ were likely to cost, whilst the prime minister was quick to assure Northern Irish exporters that there would be no checks on goods sent to the British mainland.  Compared to the Keir Starmer video, there was at least a greater purpose to such deceit, with the Conservatives needing to present Labour’s economics as utterly unhinged to make their economic spending look anodyne and achievable; and they obviously need to pretend that Northern Ireland will still be an integrated part of the UK should Johnson’s deal pass, rather than a part of the UK sold off to the EU as a matter of political convenience.

Labour, meanwhile, are little better, although they have at least tended to keep their behaviour within the traditional bounds of political spin. Their Brexit policy, as much as they claim to be accepting both sides, would keep the UK closely tied to the EU.  The economic literacy of this aside, it does disenfranchise those who would now welcome a complete departure, something they will not, and cannot, acknowledge, but something leaves them vulnerable to claims of hypocrisy.  More damaging, though, is their growing willingness to propose the nationalising of industries, undermining McDonnell’s continual promises to the media and to the industries that wholesale economic vandalism is not his intent.   Once you’ve broken the promise to one industry to not nationalise it, there is little reason to believe you won’t break the same promise to another.

What all of this leads to is a fundamental disagreement over what reality is.  Even before this election, the question of what is ‘true’ was a debatable one.  As the politics have become more divided, many media outlets have chosen a side, presenting their readers and viewers with an altered perception of truth, whilst even neutral outlets like the BBC are distrusted.  Couple this with the individualised nature of social media, and we are all in miniaturised silos, no one having precisely the same conception of reality as anyone else.

Should the Conservatives win, a sense of grievance will persist – and may even grow further. Assuming the economic and social outcomes are anywhere near what experts predict, no one expects this Conservative government to hold its hand up, shamefaced. Instead, they will inevitably be forced to continue with the lies, wantonly distributing blame to whoever they think their base will be most willing to attack.  Such a reality will move us even further towards a public sphere that resembles that of the Nazi jurist, Carl Schmitt, where he thought politics was not game, but mortal combat where participants were either friends, or enemies. In his philosophy, enemies needed to be eliminated, friends unified over their hatred of the enemy rather than any ideology per se. This would lead to a politics of constant antagonism, where the focus is on attacking the enemy, rather than serving the country.

Even if the Conservatives don’t win, our political world is not going to become any more unified.  Politicians and the media need to begin to think about how they are going to pull us all back to reality, rather than trying to push us further away from it.  Otherwise, the risk of a Schmittian public sphere may become our probable, permanent reality, rather than a possible, transient one.