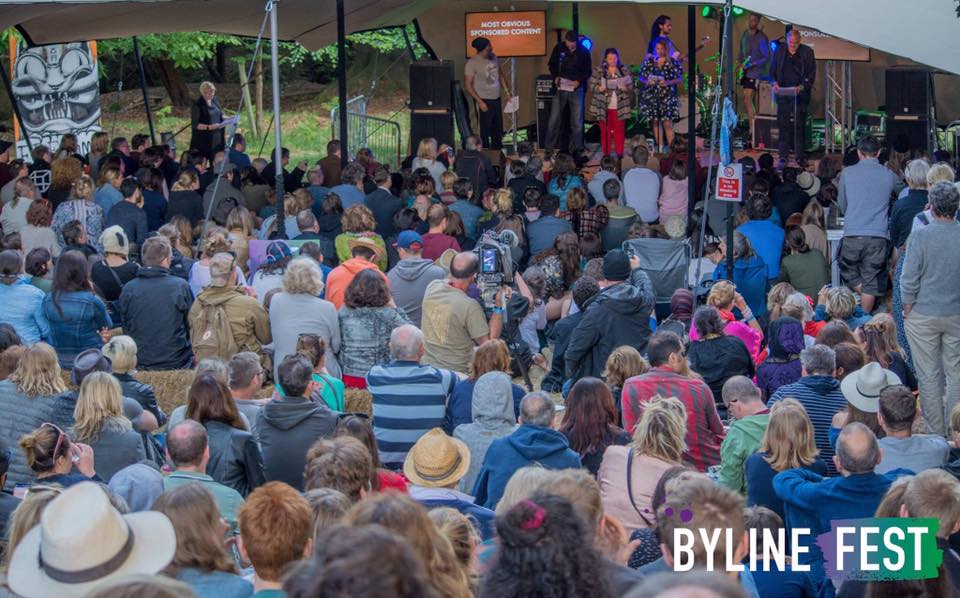 A media backlash following the high profile collapse of the investigation into a VIP paedophile ring was failing genuine victims of historical abuse, according to a debate by investigative journalists at inaugural Byline Festival.

The panel included David Hencke, the journalist who headed up the defunct investigative website Exaro News which took the lead role in promoting allegations investigated by the Metropolitan Police in its disastrous Operation Midland; author and film-maker Tim Tate; and Meirion Jones, investigations editor at the Bureau of Investigative Journalism. Julie Bindel, the Guardian journalist and feminist campaigner, chaired the session called Silence and Abuse which looked at press reporting of historical child sex abuse cases..

The Byline Festival claims to be the first ever festival of independent journalism and took place in East Sussex June 2 to 4.

Martin Bell OBE gave the opening address (Can journalists ever be independent?) and John Cleese hosted the Bad Press Awards to ‘celebrate the worst of British journalism’ (The Daily Mail was overall ‘winner’ taking five of seven awards including a life-time achievement gong for editor Paul Dacre).

From witchhunt to backlash
Tim Tate characterised media interest in the area of historical sexual abuse claims as a swinging pendulum-like between two extremes. ‘First there is a wave of claims, often sensational and frequently involving VIPs, celebrities or politicians,’ Tate said. ‘Then when the evidential foundation for some or many of those allegations turns out to be shaky at best, there is a backlash in which the allegations are pronounced a “witchhunt” invented by a few overzealous child protection professionals whose improper behaviour has caused terrible suffering to innocent adults.’

Tate reckoned that the media was ‘in the middle of the backlash phase’. ‘The vast majority of journalists view child abuse as not a problem worth dealing with. The only story it is worth reporting at all is the failures of those charged with the protection of children.’ He went on to argue that the evidence behind a backlash was often ‘as flimsy as the overhyped original stories’.

He blamed the current backlash on Exaro and the website’s promotion of the allegations of the single witness known only as ‘Nick’. Exaro ‘pressured the Metropolitan police into launching an investigation’, he said. Tate has taken issue with Exaro before, saying:

‘By any standard of genuine journalism, Exaro behaved with gross irresponsibility. To use an analogy (coined by a US Supreme Court judge as the limit of free speech), it ran into a crowded theatre and shouted “fire” – without ever checking whether there really was one.’
Tim Tate

‘There has being this great myth that somehow a tiny organisation of six journalists forced the entire Metropolitan Police to spend £2m,’ said David Henke, former Westminster correspondent on the Guardian. Exaro collapsed last year claiming that its demise was due to a failure to capitalise on commercial opportunities rather the controversy over the VIP abuse claims.  It is reckoned that Operation Midland costing at least £2.5m, tied up officers for 17 months and trashed the lives and reputations of those who came under its suspicion.

David Hencke said that Exaro reporter Mark Conrad ‘went with Nick to see them, introduced them, left them and they went on to decide to investigate themselves’. The journalist reckoned there was ‘a pretty strong dispute’ between Hencke, editor-in-chief Mark Watts and Conrad. ‘We repeatedly warned him not to rush into stories that were uncorroborated. We did not force the police to take on this investigation at all.’

The journalist said that the ensuing backlash happened to ‘coincide with there being absolute proof that child sex abuse is an industrial stage’. Back in 2015 the then prime minister David Cameron said that children in the UK had suffered sexual abuse on ‘an industrial scale’ (here).

In November 2016, former High Court judge Sir Richard Henriques, in a damning review of eight investigations, identified 43 failings in relation to Operation Midland alone. Sir Richard was highly critical of a change in police policy in favour of accepting uncritically the accounts of victims. His review cited a 2014 statement of Her Majesty’s Inspector of Constabulary setting out ‘the presumption that a victim should always be believed should be institutionalised’.

Chief constable Simon Bailey, who headed up Operation Hydrant set up to share good practice to forces investigating historic abuse cases, told Sir Richard that he reckoned only ‘0.1%’ of all complaints might be false and that such a risk of error was ‘so negligible’ that it could be disregarded.

Sir Richard disagreed. ‘The policy of ‘believing victims’ strikes at the very core of the criminal justice process,’ Sir Richard said. ‘It has and will generate miscarriages of justice on a considerable scale.’

The lawyer Harriet Wistrich, who was in the audience, took issue with the report’s conclusion. ‘How do you corroborate those stories other than with the voices of those who were the victims?’ she asked. ‘What as a prosecutor, a police officer and a lawyer we need to do with those cases is enable that person to articulate the story and give them the courage to be able to tell it.’

Whilst she acknowledged that there would always people who lied, she said ‘in my experience they are absolutely the tiny minority’. ‘The women’s movement fought for many years to try and encourage prosecution – if you don’t take the approach of believing the victim you are never going to get people coming forward,’ she said. ‘There are too many barriers in place already to stop anyone telling those stories – you have to enable people to tell those stories and trust them.’

Meirion Jones was head of investigations at BBC Newsnight but left the broadcaster after he tried to expose the Jimmy Savile scandal. He warned of ‘polarization’ on the part of the media – ‘either you believe everything or you believe nothing’. ‘Real cases not being explored properly and fake cases are being believed all too readily,’ he said.

Jones criticized the BBC Panorama on Operation Midland (The VIP Paedophile Ring: What’s the Truth?) which he said ‘rubbished’ Exaro but went ‘much further, effectively giving the all clear to any politician or senior figure who had abused anyone.’ He pointed out the Panorama was broadcast the night before the sentencing of Bishop Peter Ball was sentenced (here). ‘Step away from the agenda. Look at the evidence in each case,’ he said.

Julie Bindel complained that there was a total lack of press reporting about what she described as ‘boring mundane routine child sexual abuse that happens when there are no celebrities involved’. ‘It’s not sexy enough,’ the journalist said. ‘The police cannot be bothered with it. The girls are disbelieved because the they are told that they are fantasists and that the mothers will be killed if they speak out. When was the last time you read about children being seriously sexually abused and assaulted in the home by a male relative except perhaps someone like Fred West? Where are the cases? Where are the journalists that stick with these cases the years on end.’ She has been investigating one such case for the Byline site.

One audience member suggested journalists should not restrict themselves to one camp or the other (‘neither doing the debunking thing nor doing the exposé of abuse’). ‘If you had your doubts about Nick, would it not have done journalism a great service to have broken ranks if you possibly could’ve done?’ she asked David Hencke.

Julie Bindel said that she wanted to use her time ‘the best way possible as a journalist and a campaigner against sexual violence’. ‘I will always look at exposing those who have raped and abused children,’ she said. ‘There are plenty of others you want to take the time to look at the falsely accused person. And if you’re interested, I will find you a lifelong smoker who has not developed lung cancer.’

What is the future for legally aided criminal defence?

Home Secretary orders review into Operation Midland fiasco
More than 4,000 allegations of historical abuse have…
Leon Brittan's widow accuses Met of losing 'moral…
The judge who issued search warrants for Operation…
'Nick' to be charged with perverting the course of…