Blacklisted: The secret war between big business and union activists

Blacklisted: The secret war between big business and union activists 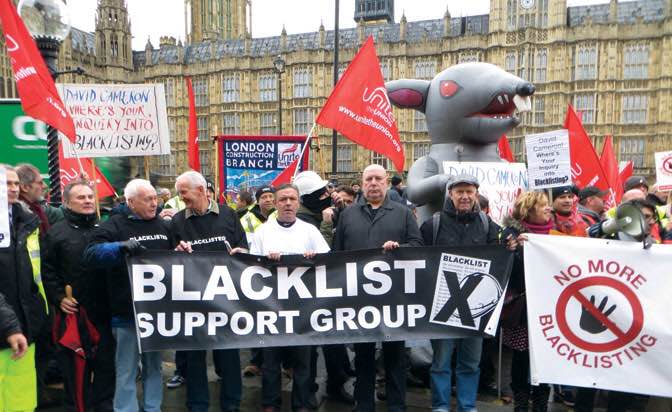 REVIEW: The communications revolution of the past 40 years has transformed our capacity to hold and use information about large numbers of people. As databases grow from hundreds to thousands and then tens of thousands of people, our fear grows that much of this information may have been gathered wrongly: that the information itself is incorrect, or that it has been gathered without our consent or knowledge.

We all suspect that our personal data is being shared behind our backs, whether by utilities companies eager to trade on vulnerable pensioners, or by parts of the secret state who are monitoring emails on an industrial scale in the hope of catching extremists. Very rarely do we find out for definite who has been harmed or how.

In the conventional press story that usually follows, attention is paid to the whistleblowers, self-sacrificing individuals such as Edward Snowden or Bradley Manning who once played a part in a system of malicious data collection but threw their position away in order to expose the corrupt practises of giant organisations.

The story of the construction industry blacklist, brought to light in this extraordinary book, corresponds in many ways but not in others to our conventional fears about the manipulation of data. One difference from the usual story is that Dave Smith, the secretary of the Blacklist Support Group, and Phil Chamberlain, the freelancer who originally broke the story of the blacklist in the Guardian, are able to show in much more graphic detail than is usual just how much harm was caused to the victims.

From the accounts of the first group, they are able to describe what it is like to be a skilled worker, and to find yourself suddenly unemployable, like Frank Morris who describes going home to empty cupboards during the recent Olympic building boom because he had supported a dismissed colleague and been placed on the blacklist, or Dave Ayre who said: ‘I’d been sacked so many times at Christmas that my kids that my kids thought it was part of the Father Christmas story.’

A second difference is that the champions of the story are the building workers who have been fighting for decades to secure trade union and healthy safety rights in their workplaces, rather than the whistleblowers.

There were indeed managers within the blacklisting process who became disenchanted with their employers and belatedly blew the whistle on this practice – such as Alan Wainwright, whose evidence at an early Tribunal hearing led to Chamberlain’s report and the subsequent raid by the Information Commissioner’s Office of the blacklisting company, the Consulting Association.

But Wainwright is an equivocal figure in the story, seemingly trusted neither by the employers nor the construction workers. And much the same can be said of Ian Kerr, the man who kept the blacklist going, very profitably, for decades. Kerr’s widow Mary spoke to the authors and described how he died of a heart attack shortly after giving evidence to a Parliamentary Select Committee. Only two of Kerr’s colleagues within the TCA, staffed as it was by the personnel directors of all the main construction companies, even sent her their condolences. Not one attended his funeral.

If there are heroes to Smith and Chamberlain’s story it is rather individuals such as Mick Dooley and Chris Clark, founders of the Join Sites Committee, a rank-and-file union group of the early 1990s.

One of Dooley’s best-known actions was a strike at Vascroft in 1992, when he occupied a tower crane for 10 days in protest at the dismissal of union stewards, effectively preventing an entire site from working.

That tactics of this militancy were required is evident from the other passages of the book which describe the worsening conditions on sites over the last twenty years as union organisation has decayed. One of their sources Robert Smith describes working on the huge and vastly profitable Channel Tunnel extension to St Pancras, among rats, without toilets or other basic safety requirements.

While there was much that the employers might truthfully have told each other about the tactics of certain individuals, blacklisting went far beyond the sort of open, honest record of occasional unofficial militancy that might be justifiable. It extended to the private lives of those who were being spied on, their relationships, the employment of their relatives, the private opinions of their partners.

The names on the blacklist which cause the greatest distress are those who were rumoured to have worked at a site where the union had called a strike or who were said once to have purchased a copy of a left-wing newspaper, and found themselves subject to a simple data-trawl, often years and sometimes decades later. And where their name was on the blacklist, for any reason, they simply were not employed.

A large portion of the narrative is given over to the accounts of the legal battles which have led to the discovery of the blacklist and to the partial attempts to obtain redress for its victims. I have acted as a barrister for two of the litigants, and it would not be appropriate for me to comment on these parts of the narrative. In any event, a previous article by Dave Smith for this website explains that part of the story.

Was blacklisting specific to construction, or has it become part of the ordinary way in which industrial relations are conducted in this country? I have sat in court and listened to employers in radically different industries from construction admit to all sorts of practices which differ only in scale from the picture in this book.

Has blacklisting ended? The authors term it ‘a global phenomenon which has been going on for centuries’. Kerr’s files were constructed out of the technology of a previous industrial era. His data was held on paper cards in drawers. New technology makes it easier to spy on large numbers of workers and to hide the fruits of this industrial espionage, but no less destructive in terms of their consequences for those about whom false data is being held.

The authors, and the whole campaign whose voices they have recorded, deserve our thanks for bringing this secret conspiracy into public focus.

David is a barrister at Garden Court Chambers specialises in housing and employment cases. He acts for tenants and mortgagors in possession hearings, appears in homelessness appeals, occupation orders and disrepair cases. David also represents claimants in discrimination claims at the employment tribunal

Our print magazine is Proof. Contributors include Michael Mansfield QC, Bob Woffinden, David Rose, Eric Allison and Ian Cobain.
Buy Proof Magazine
The latest issue (Why legal aid matters) includes Helena Kennedy QC and Martha Spurrier in conversation, David Conn on the legacy of Hillsborough - plus how to build your own law centre.
David is a barrister at Garden Court Chambers specialises in housing and employment cases. He acts for tenants and mortgagors in possession hearings, appears in homelessness appeals, occupation orders and disrepair cases. David also represents claimants in discrimination claims at the employment tribunal

Episode 2: 'This isn't spying on terrorists. This is…
World’s largest arms fair opens despite week-long protests
Why rape victims’ privacy must be protected from…
Freedom of information: clearing houses, blacklists…
Episode 6: 'It was a political trial - start to finish'