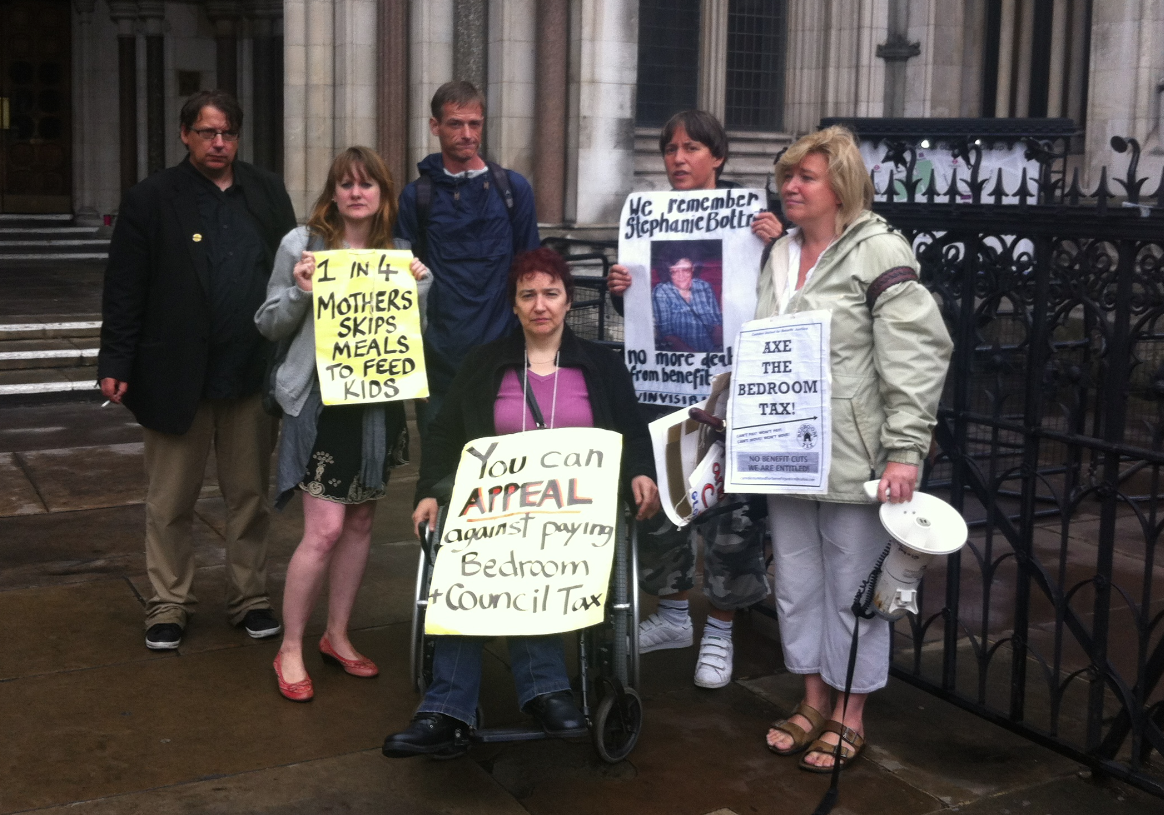 Lawyers representing adults and children with disabilities who are challenging the government’s controversial ‘bedroom tax’ have vowed to fight on after losing part of their High Court challenge to the new housing benefit regulations, writes Mary-Rachel McCabe.

One of the most politically charged benefit changes introduced by the coalition, the social sector size criteria (‘bedroom tax’) came into effect on April 1st as part of wider government welfare changes. The size criteria in the social-rented sector allows for one bedroom for each person or couple living as part of the household, and states that two children under 16 of the same gender are expected to share, and two children under 10 are expected to share regardless of gender. Any bedrooms beyond this are deemed ‘spare’ by the government. Social tenants with a ‘spare’ bedroom are confronted with a choice between downsizing to a smaller property, or facing a cut in their housing benefit – 14% for people deemed to have one extra bedroom and 25% for those with two or more extra bedrooms.

Ministers say the policy helps control welfare costs and addresses overcrowding in the social-rented sector by freeing up social housing. A DWP spokesman at the time of the High Court case said it was ‘only right’ to bring fairness back to the system.

According to the DWP’s own statistics, of the 660,000 people adversely affected by the bedroom tax, 420,000 of those have a disabled person in their household.

One of those 420,000 is Jayson Carmichael, one of 10 claimants in the recent High Court challenge to the bedroom tax. Carmichael is the full-time carer of his wife Charlotte, who has spina bifida. They have lived in an adapted two-bedroom Housing Association flat for over ten years. As a result of Mrs Carmichael’s health issues, the couple cannot share a bed and there is no room in their bedroom for two beds so Mr Carmichael sleeps in the other room. The government has said that the Carmichaels are under-occupying and that they have to move, or continue to face a 14% reduction in their housing benefit.

The other nine claimants also came from households containing disabled children or adults, or vulnerable children who could not share bedrooms due to, for example, the risk of violence arising from complex behavioural problems. The claimants all argued that the bedroom tax discriminates against disabled people by failing to recognise their additional needs and that the Secretary of State for Work and Pensions, Iain Duncan Smith had breached the public sector equality duty in introducing the bedroom tax.

Partial victory
In a High Court judgment handed down on Tuesday, Lord Justice Laws and Mr Justice Cranston accepted that the new rules are discriminatory, but decided that the discrimination was justified and therefore lawful – apart from in cases of disabled children unable to share a bedroom because of their disabilities.

A part-victory for the claimants, as the Court found that Iain Duncan Smith has been aware that the law must be changed to provide for disabled children since May 2012, and was highly critical of his failure to make regulations to provide for them: ‘The Secretary of State has no business considering whether to introduce regulations…He is obliged to do so.’ Lord Justice Laws went on to say that the current state of affairs ‘cannot be allowed to continue’ and ordered the government to ‘very speedily’ make regulations to show that there should be ‘no deduction of housing benefit where an extra bedroom is required for children who are unable to share because of their disabilities.’

Although the High Court recognised that the bedroom tax would discriminate against some disabled adults, they held that this was justified – even in those cases where the adults are in the same situation to children with disabilities who could not share a room. Lord Justice Laws and Mr Justice Cranston accepted the DWP’s argument that it had recognised the discrimination and provided adequate mitigation, in the form of £25 million in ‘discretionary housing payment’ (DHP) – an extra pot of money available to local councils to help those affected by the penalties. The Judges also rejected claims the bedroom tax breached the public sector equality duty, asserting that it is not the job of the court to ‘micro-manage’ policy decisions in the name of equality.

Carmichael has labelled the ruling ‘a travesty of justice’ and the lawyers acting for him and other adults with disabilities confirmed that they intend to appeal, arguing that the discriminatory impact of the measure on people with disabilities cannot be justified and is unlawful. Speaking after the judgment, Richard Stein –from the human rights team at the law firm and Justice Gap associate Leigh Day and Co, which is representing some of the claimants – said that his clients are ‘bitterly disappointed’ by the decision ‘but not defeated’.

‘Many people are suffering great mental and physical torment through the imposition of these welfare reforms – the need for resolution is urgent…There can be no doubt that this legislation targets and penalises the most vulnerable in society and we believe we will ultimately have it overturned by a Court of law.’
Richard Stein

Stein went on to criticise the inadequacy of DHPs, arguing that the £25m the government has made available to councils to make discretionary payments to help disabled people affected by the benefit cuts is insufficient.

The inadequacy of DHPs is well-illustrated by the case of Richard Rourke, a wheelchair user who has had extensive adaptations to his home but has been granted a DHP of only £7.41 per week towards a benefit shortfall of £25. Rourke is now facing eviction for arrears due to the bedroom tax. Rourke said the policy has made him feel like a ‘scrounger’ and as if he is ‘sub-human’.

A pious hope
A spokesman for the DWP announced a further £35m of funding to councils following the ruling ‘to ensure extra discretionary housing support is in place to help those who need it’ but the housing charity Shelter has nevertheless described the ruling as ‘devastating’, and criticises Ministers for repeatedly offering up DHPs ‘as the solution to every adverse impact of welfare reform’.

Shelter argues that the cash-limited pot simply will not go far enough to support all those that need it, and the discretionary nature of the fund means families cannot guarantee if they will be successful. The charity echoed Martin Westgate QC, who during the proceedings declared the DHP fund to be ‘no more than a pious hope’ from the government that it would relieve those most in need from the adverse impact of the bedroom tax. Campbell Robb, Shelter chief executive, warned that disabled adults and families with disabled or vulnerable children will be put at ‘real risk of homelessness for having a bedroom they just can’t do without.’

With one suicide already blamed on the bedroom tax, and another man cutting his throat in protest at the reforms, one wonders how a government policy with such deleterious effects on the vulnerable can ever be justified. As David Orr, chief executive of the National Housing Federation has concluded:‘it is clear that the bedroom tax makes no sense. I dread to think what will happen if it is allowed to continue.’