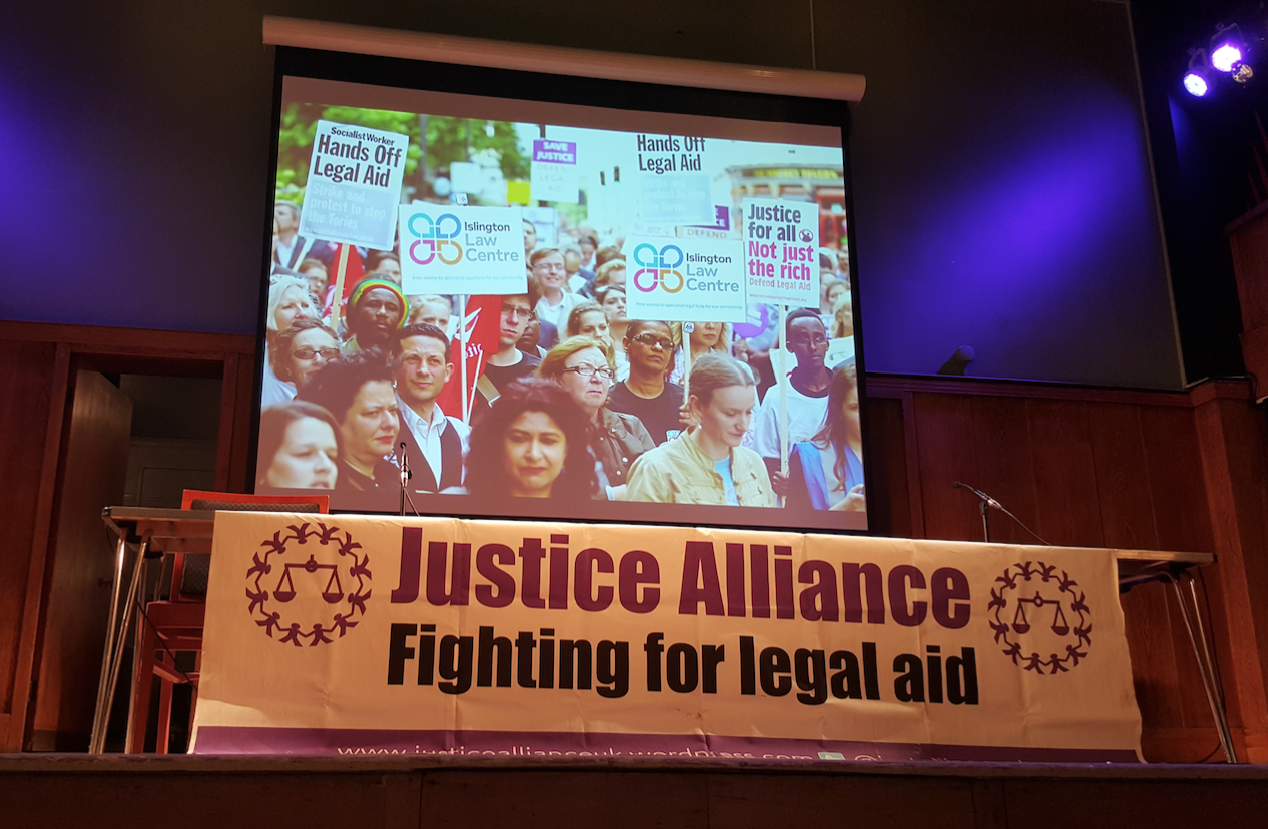 Jeremy Corbyn was the headline act at the packed Voices for Justice rally organised by the Justice Alliance this week in support of legal aid, with the group calling on the government to ‘scrap two-tier justice’. The Labour leader was greeted with a standing ovation as he walked onto the stage at Conway Hall in London. The rally ended in a similar fashion, with rapturous applause after Corbyn’s speech in defence of the principle of access to justice. 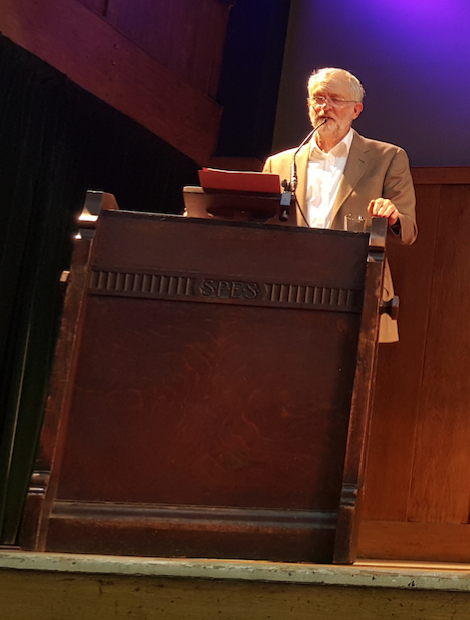 The Labour leader’s popularity with access to justice campaigners reflects a longstanding commitment to legal aid, an impression enhanced by his decision in the first days of his leadership to ask shadow justice minister Lord Willy Bach to carry out a comprehensive review of legal aid for the party. Bach is in the process of appointing a commission of experts to assist in the task, which will ‘focus on access to justice as public entitlement and rethinking our justice system for the 21st century’. 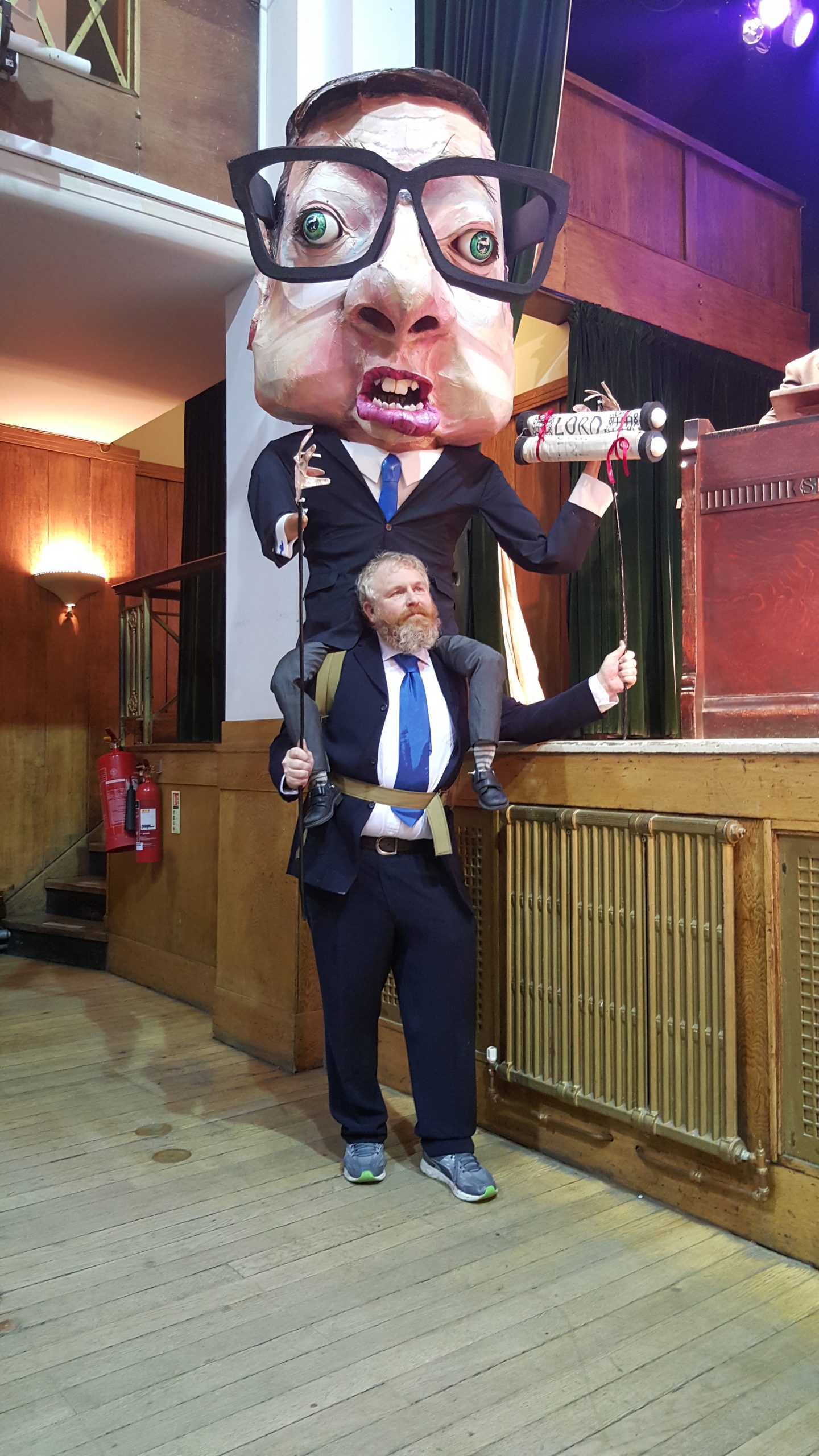 Corbyn pledged that his party ‘will support and defend the principle of legal aid’, deplored the ‘denial of justice’ and ‘serious miscarriages of justice taking place every day’ because of ‘brutal’ cuts to legal aid by the coalition government. After recapping the damage that has been done by a 25% reduction in the legal aid budget, including the number of social welfare cases funded by legal aid falling from 470,000 in 2010 to just 53,000 after the implementation of the Legal Aid, Sentencing and Punishment of Offenders Act 2012 leading to ‘hundreds of thousands of people going without the help they need’, Corbyn described legal aid as a ‘basic human right’.

During an impassioned address, Corbyn found time to joke about the ‘fun three days’ he had reshuffling his shadow cabinet (he later revealed that the final decisions were made by text while he was on stage waiting to speak). The leader of the opposition also announced that he owes his very existence to the venue of the rally, Conway Hall: his parents first met in that very hall ‘at a rally protesting about the fascist invasion of Spain’. ‘Now you know where I get my politics’, he added.

Corbyn denounced the myth of ‘fat cat’ lawyers riding a legal aid ‘gravy train’, saying that he sees ‘a lot of very hardworking, underpaid and often young solicitors doing their bit to put something back into society – we should value them’ and the media that perpetuate damaging untruths about legal aid ‘should be condemned’. This call to debunk common misconceptions helpfully coincided with the relaunch of Young Legal Aid Lawyers’ updated Legal Aid Mythbuster, distributed at the rally and available to download here.

An ‘ideological and spiteful’ attack on the rule of law 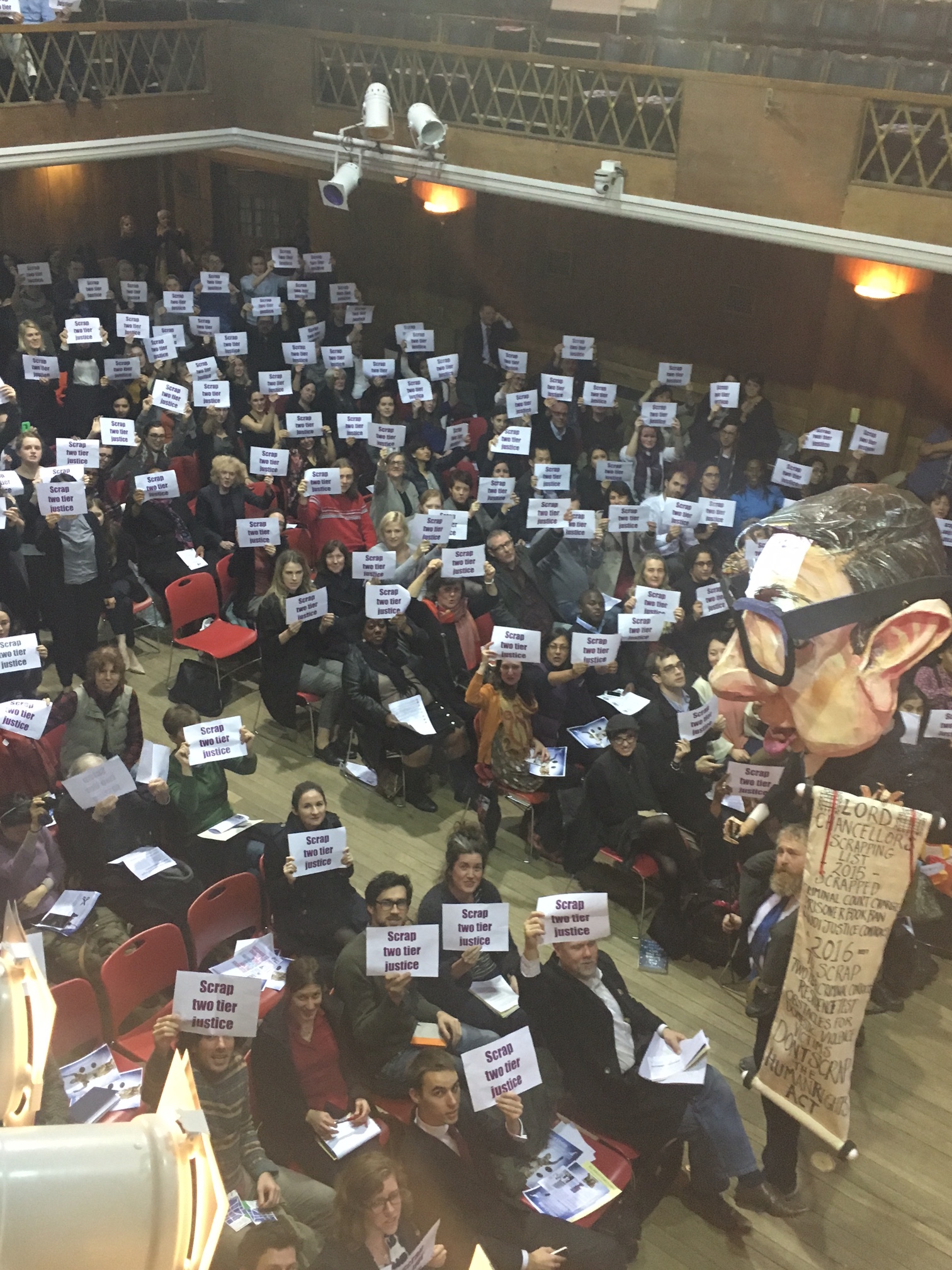 The Voices for Justice audience had earlier heard from campaigners, lawyers and people who have relied on legal aid to obtain justice, including Marcia Rigg (sister of Sean Rigg, who died in police custody in 2008) and Awate Suleiman, a refugee who has had four cases against the police in two years and ‘won all of them’. Pragna Patel of Southall Black Sisters told the rally that, following the Court of Appeal judgment in the residence test case, it appears that ‘inequality and discrimination is now a ‘legitimate’ aim of this government’.

Patel argued that ‘the legal aid system, once the envy of the world, should be accorded the same iconic status as the NHS’, while Helen Steel, an environmental activist who was involved in the ‘McLibel case’ brought by McDonald’s and also deceived into a relationship with an undercover police officer, called on the audience ‘to continue the fight for legal aid and accountability and justice for all’.

‘We know austerity is ideological, but this attack on [legal] representation and therefore the rule of law is doubly ideological and spiteful – it is designed to stop the powerful being held to account. This is what despots do all over the world: they attack the lawyers as well as the victims.’

‘Somebody who believes what we believe’ 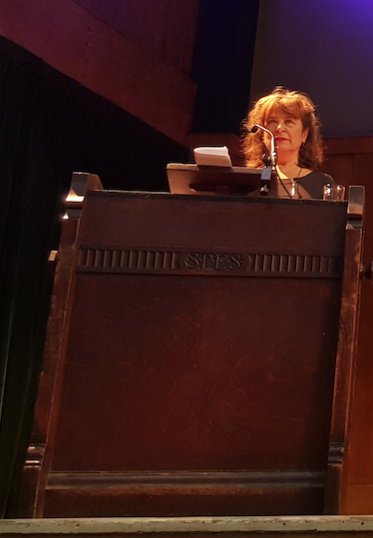 Labour peer and self-described ‘old legal aid lawyer’, Baroness Helena Kennedy QC, told attendees that we are witnessing ‘the destruction of one of the iconic things created after the Second World War’, the legal aid system set up by the Legal Aid and Advice Act 1949. However, her party is now ‘being led by somebody who believes what we believe: that this is vital’.

That was the crucial message of the night. The main party of opposition to the government is now led by someone who demonstrably and unambiguously understands the importance of legal aid. Jeremy Corbyn has been a staunch supporter of access to justice campaigns throughout his 32 year parliamentary career. Of course, he has his detractors and it remains to be seen how Corbyn’s Labour will fare electorally, but while he is leader of the opposition, those of us who care about legal aid have a powerful ally.

If you would like to add your voice to the Voices for Justice, support the Justice Alliance or join Young Legal Aid Lawyers. Together, we can save legal aid. 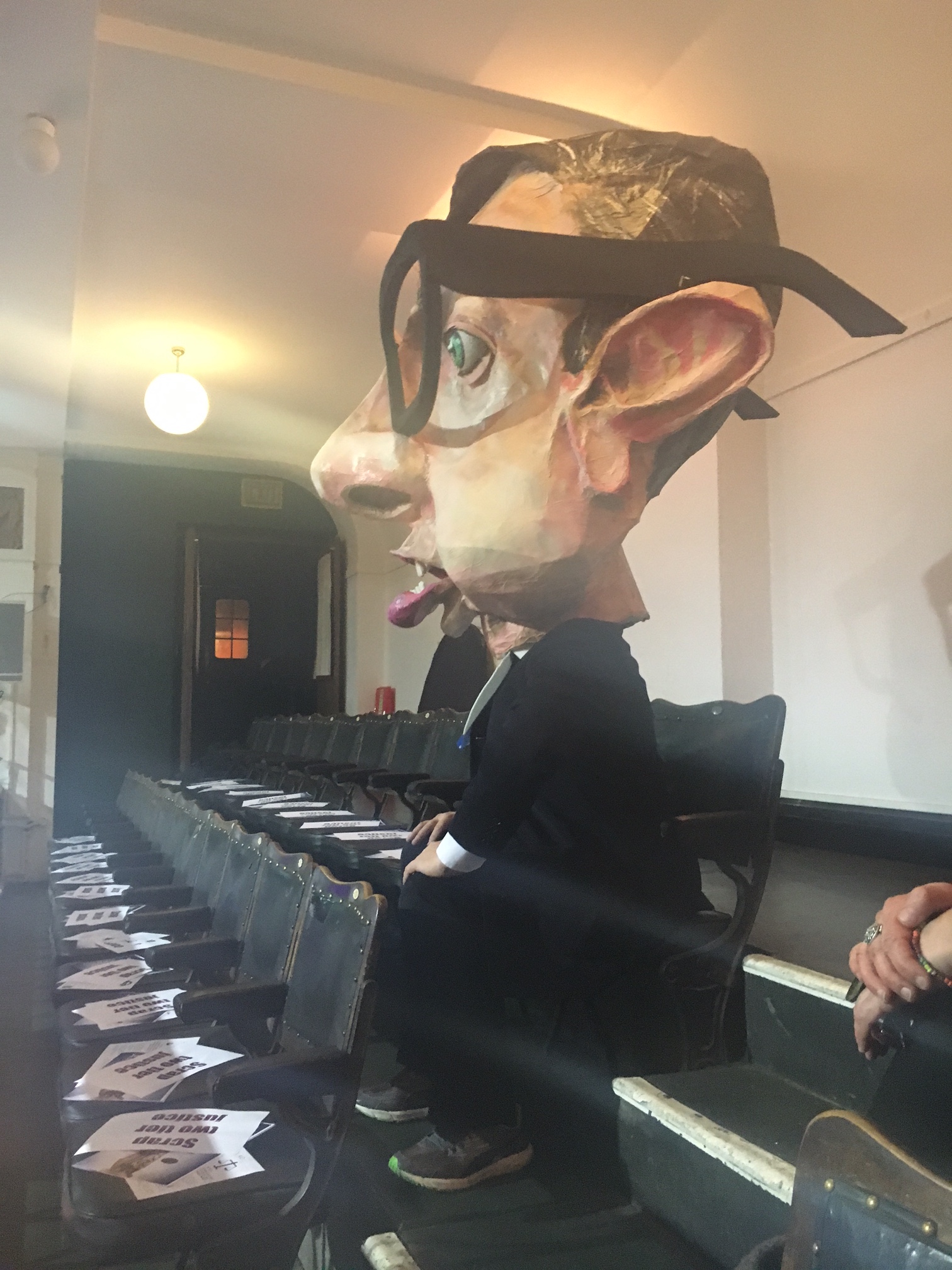 Election 2019: 'Populism is the order of the day'
Environmental lawyers puts councils 'on notice' over climate…
Lack of legal aid for immigration detainees in prisons…
Victims of trafficking failed as a result of legal aid…
Wouldn’t it be great to hear Labour engage in an adult…