Two-thirds of all people Tasered identified as ‘mentally ill’

Two-thirds of all people Tasered identified as ‘mentally ill’

Two-thirds of all people Tasered by the police in England and Wales between 2010 and 2014 were identified as mentally ill. The figures were made available by the Home Office following a Freedom of Information Act request by www.thejusticegap.com.

The data reveals that in 45% of incidents where police used Tasers – this includes where the weapons were drawn and aimed – the subject was identified by officers as being mentally ill; and in instances where the police actually discharged the stun guns, 67% of subjects were identified as mentally ill.

Norman Lamb MP, the Liberal Democrat health spokesperson who launched the cross-party Equality for Mental Health campaign last month, described the numbers as ‘clearly very worrying’. He said that it is ‘crucial that police forces have proper guidance and training in place to ensure officers are able to act in a safe manner when working with someone with mental ill health’.

Mike Penning MP, minister for policing told www.thejusticegap.com, that ‘sensitive powers’, such as Tasering, required ‘proper accountability and transparency’ and noted that the government is reviewing options for publishing figures on Taser use. 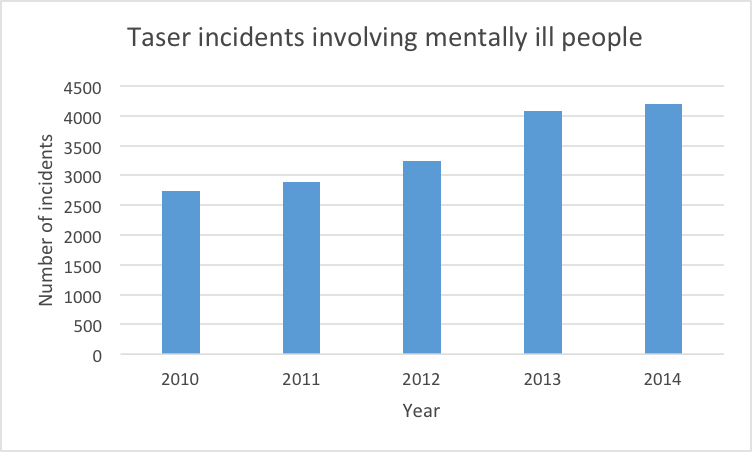 Essex Police covers a population of 1.7 million people. In 2014, the force recorded 91 Taser incidents involving mentally ill people. Tasers were fired in 17 of these incidents. The controversial ‘drive stun’ mode was not used. Drive stun mode is where the Taser is pressed against the subject with the intention of causing pain rather than incapacitation.

This week West Midlands Police made two major out-of-court settlements to Cornelius Thomas relating to two separate incidents. Thomas, who was diagnosed with bipolar disorder in 1999 but has no history of violence, was Tasered four times in an incident in June 2011 and, four months later, again threatened with Tasers. The police were supporting mental health professionals attempting to section Thomas under the Mental Health Act. Following the settlement, Thomas’ solicitor commented that his client ‘felt a surge of electricity, intense pain and fear’ as each Taser barb made contact.

‘My concern is that there is a mission creep and a disproportionate use of Taser,’ commented Thomas’s solicitor Iain Gould who specialises in actions against the police. ‘Too often it has become the default position. There is a worrying trend of Tasers being used in circumstances that just don’t call for it such as in the case of Cornelius Thomas.’

Amnesty International has called for a major rethink in government policy on Tasers. Amnesty urged the government to produce guidance specifying that Tasers must only be used in situations of imminent threats to life or very serious injury. Amnesty also requested a review into the use of Tasers against mentally ill people, including detailed medical studies of the psychological impacts of the weapon on mental health conditions. 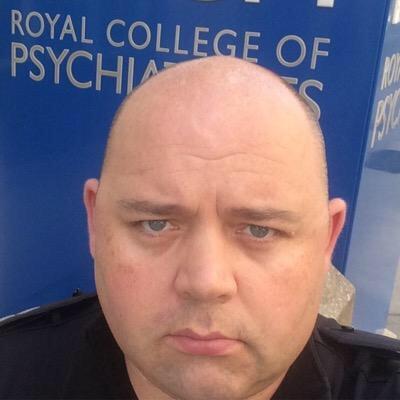 Interview with Michael Brown, mental health coordinator at the College of Police (@MentalHealthCop)

Do you think there are any viable ways of improving how police record incidents to make the records more reliable?
Only if it were a requirement to subsequently cross-reference Taser records and officer perception with incident outcomes and/ or health records.  Obviously Taser usage is sometimes connected to detention under the Mental Health Act, sometimes as a part of an arrest for an offence – it would be necessary to pull together incident outcomes with those initial perceptions.  It would also rest upon clearer understanding of what you want records to show: if someone is psychotic because of drug consumption and detained by NHS services under the MHA for three days until drugs have worn off at which point it becomes obvious there is no underlying MH problem: does this count as ‘mental illness’ or not?  Definitions are key and where MH and law overlap, they are notoriously difficult to achieve agreement on.

Are all police who use Tasers properly/adequately trained to recognize symptoms of mental illness?
It is recognised that all police officers need improved training on mental health awareness and this is something that will be rectified in 2016 by the first ever national training packages for police officers on mental health with a requirement that existing specialist training (taser, custody, public order and investigations amongst others) be updated in light of new guidelines that give rise to that training.  As such, most Taser officers are frontline operational officers and they will get this training in 2016/7.

There is significant variation between police forces. For example, West Midlands Police Tasers eight times as many mentally ill people per capita as Essex. Such a disparity cannot merely be because of reporting issues. West Midlands Police also Taser roughly three times as many mentally ill people per capita as the London Met. Any thoughts about why there is such a disparity would be greatly appreciated.
As your data goes back over five years, be wary of any comparison with the Metropolitan Police over the period as they were one of the last to roll out Taser beyond specialist firearms and a few other officers.  West Midlands Police by contrast were one of the first.  Is the disparity still the same if you just look at the last full year’s figures, for example?

Again it may come down to some cultural issues: the number of ‘mentally ill’ people in the data is based on officers’ observations of that person, not always on objective information, so that may account for some discrepancy. West Midlands Police are also known to have had more active work and local training delivered on mental health than the Met over the last five years. I’m unfamiliar with Essex Police so cannot fairly offer an instinct but I wouldn’t rule out the impact of local practice.

We know that the use of s136 varies enormously across forces, with some forces using it three times as often as others, per capita. Proper research would be needed to understand it, I fear.