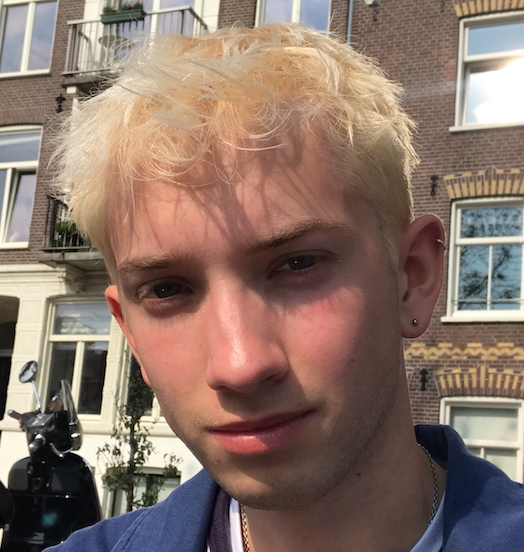 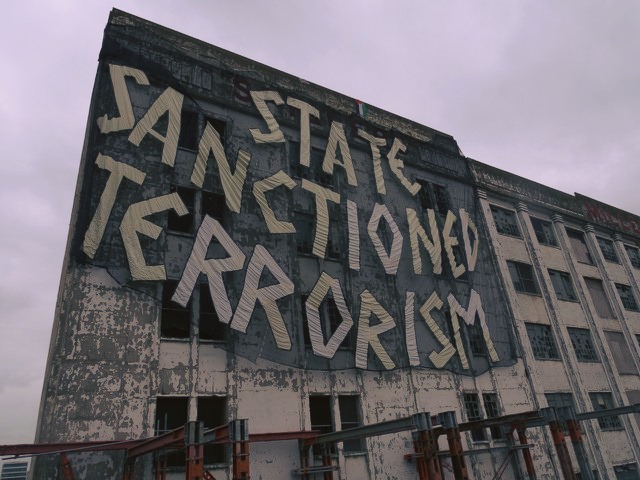 Banner at Millennium Mills building opposite the Excel Centre, London hosting one of the world's largest arms fairs (CAAT)

Hundreds of protestors gathered outside the ExCel conference centre in London on Sunday, marking the end of a week-long series of actions against the Defence & Security Equipment International (DSEI) arms fair.

‘Stop The Arms Fair’, organised by anti-arms group Campaign Against Arms Trade (CAAT) has seen thousands of campaigners engage in non-violent direct action, leading up to the fair’s opening today. However, even in light of strong condemnation from Sadiq Khan, calling for the fair to ‘get out of London’, DSEI shows no signs of closing.

In fact, ministerial support seems greater than ever. Fleur Thomas, head of exports for the Ministry of Defence, forecast that ‘the future for our defence sector is a very bright one’ during a speech about the importance of DSEI for UK trade. Both Liz Truss and Ben Wallace are also due to make appearances at the event later this week.

This biennial event, which runs until Friday, will see 1,600 exhibitors come to flaunt their military innovation to international buyers, including many British-based companies. The UK is the second-largest arms manufacturer in the world, following the US, with the sector contributing £22bn to the British economy annually.

Minister for defence procurement Anne-Marie Trevelyan MP hopes this event will provide the opportunity to showcase ‘the best of British defence technology’. However, many argue that this is no defence technology, nor is it a ‘fair’ fit for celebratory nature, but rather an event where those ‘who profit from war, repression and injustice do business’, according to CAAT.

CAAT’s Andrew Smith said activists were ‘united’ in their opposition to one of the biggest arms fairs in the world. ‘DSEI will bring many of the world’s most appalling regimes together with the biggest arms companies … It’s time to shut it down for good.’

Over 100 protestors have been arrested so far, mostly for aggravated trespass and obstruction of the highway. Caroline Lucas MP pledged solidarity with protesters on Twitter last week, stating it was ‘grotesque’ that the UK supports this trade. She also declared: ‘It is grotesque that Saudi Arabia has been invited.’

However, those opposing the UK’s involvement with Saudia Arabia now do so with more than moral authority. A UN report published last week states that Britain may be complicit in war crimes in Yemen, due to their support of the Saudi-led coalition.

In June, the UK Court of Appeal ruled that British arm sales to Saudia Arabia had been unlawful. The Guardian reported that Boris Johnson, Jeremy Hunt and Liam Fox had ‘illegally signed off on arms exports’ during a secret meeting in 2016, without proper assessment of civilian casualties.

The UN has recorded at least 7,292 civilians killed and 11,630 civilians injured in Yemen between March 2015 (start of tracking) and June 2019, as a direct result of armed conflict. The true figures are thought to be much higher.

Billy is a writer and committee member for People & Planet Society at the University of Bristol. His journalism focuses on climate change, workers rights and activism

Our print magazine is Proof. Contributors include Michael Mansfield QC, Bob Woffinden, David Rose, Eric Allison and Ian Cobain.
Buy Proof Magazine
The latest issue (Why legal aid matters) includes Helena Kennedy QC and Martha Spurrier in conversation, David Conn on the legacy of Hillsborough - plus how to build your own law centre.
Billy is a writer and committee member for People & Planet Society at the University of Bristol. His journalism focuses on climate change, workers rights and activism

Arms sales to Saudi Arabia unlawful, court rules
Bereaved renew calls for legal aid for inquests
Protests of more than two people are to be banned…
Does Jeremy Bamber have a human right to be released…
Thousands of people held on remand 'for months,…