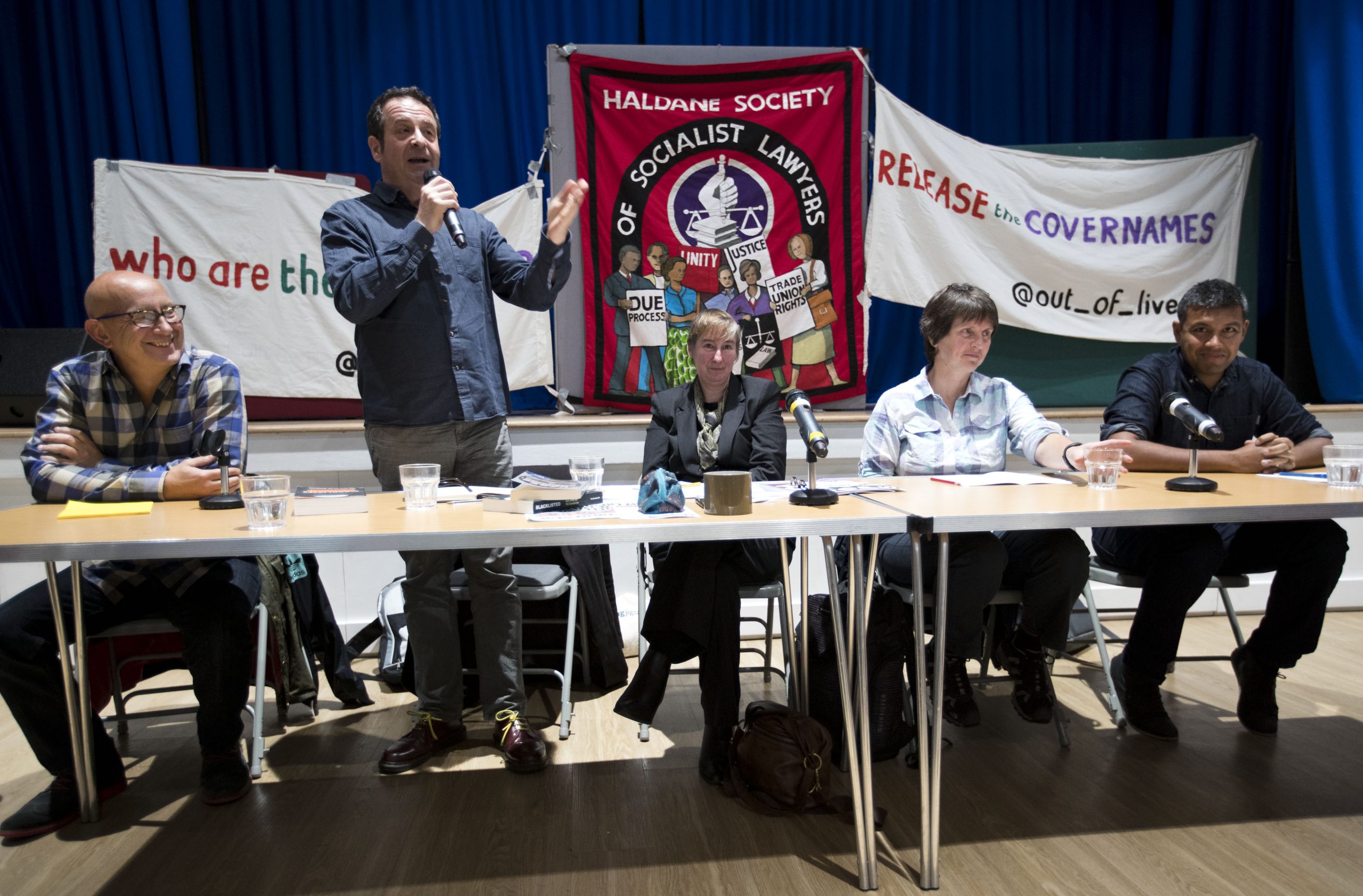 Two years into the public inquiry into undercover policing and campaigners spied upon by the state this week claimed that progress has stalled and no information had been revealed about the officers involved. Jon Robins reports

Speaking at an event at the Labour fringe on undercover policing and police surveillance, core participants in the undercover policing inquiry together with  their lawyers accused the government of delay and expressed concerns about the new chair of the inquiry.

Helen Steel is one of eight women activists who began legal action against the police having discovered that former long-term partners had been undercover policemen. Steel, who was representing the Police Spies out of Lives group, told delegates they were as much in the dark as the day that the inquiry was launched in July 2015. ‘More than two years into the inquiry and we still have had no disclosure about the relationships or the officers involved. The public has learnt absolutely nothing new about the extent of police in the abuse or how this was allowed to happen,’ she said.

In May this year, Sir John Mitting took over the chairmanship of the inquiry from Lord Justice Pitchford, who had been diagnosed with motor neurone disease. The inquiry has long become bogged down as the police have called for proceedings to be held in secret to protect the identities of the undercover officers – as reported on the Justice Gap (here).

‘The inquiry has finally acknowledged upwards of a thousand groups were spied upon but still hasn’t released the names of those groups,’ Steel told the meeting organised by the Haldane Society of Socialist Lawyers. Steel argued that whilst the police were prepared to confirm that they sent undercover officers into Isis, ‘they claimed it would be too dangerous to confirm the names of the thousand campaigns spied upon by the Special Demonstration Squad and the National Public Order Intelligence Unit,’ she said. ‘It beggars belief.’

In a message to the meeting Michael Mansfield QC, the president of the Haldane Society, claimed to be ‘under no illusions as to the extent to which agencies in the state have taken an interest in me’ in relation to his work on political cases such as Orgreave, Hillsborough and the Shrewsbury pickets.

Theresa May launched the undercover policing inquiry shortly after the publication of the Ellison inquiry into police corruption in the Stephen Lawrence case which found Scotland Yard had spied on the grieving family. ‘From the beginning Doreen and Neville had been convinced about police collusion,’ Mansfield said. Both May and the then prime minster David Cameron described those revelations as ‘profoundly shocking’.

‘What is now equally shocking and disturbing is the length of time the judicial inquiry ordered by May is taking to cut through police procrastination,’ the barrister said. ‘Meanwhile it has been reported that certain documentation has been destroyed and it is rumoured that resources for this enquiry are being reduced. The inquiry has yet to hear a single piece of evidence. There is a distinct feeling that it is being left to trickle rather than being kicked into the long grass. In my view it is one of the most important inquiries in recent times. It has the power to expose the extent to which our so-called democracy has been perverted by a ruling class anxious to quell powerful grassroots opposition.’

Dave Smith, one of a number of blacklisted construction workers given core participant status, said the undercover policing was endemic. ‘It is alright to be angry but if anyone is surprised that is naive,’ he said ‘This is what the British state do. We should not be surprised because when it comes down to it the security services are the most institutionally racist and institutionally sexist part of the British state.’ You can read Dave Smith on the blacklisting case on the Justice Gap here. 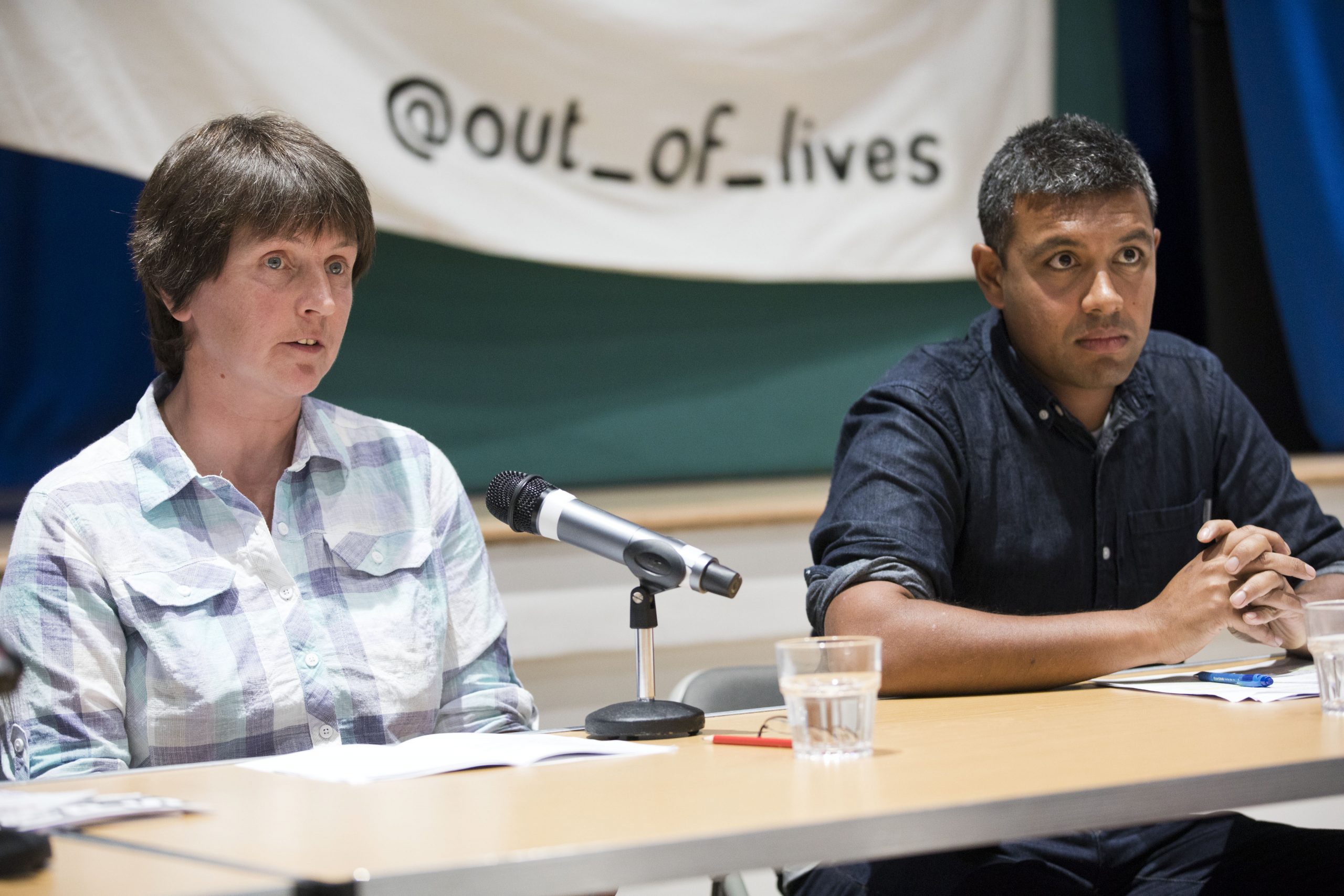 ‘I had been living with someone for two years and I did not even know who he was’: Helen Steel. Pic by Jess Hurd

Helen Steel, one of two defendants in the McLibel litigation, spoke to the Haldane meeting about the devastating impact of her two year relationship with the man she knew as John Barker (later revealed to be John Dines). The couple met through campaigning. ‘I knew him for three years before we started a relationship,’ Steel recalled. ‘During that time he became a close personal friend sharing lots of his stories about personal issues such as the death of his parents, being an only child and losing all of possessions when his van was stolen shortly after moving to the UK.’

Shortly after they started a relationship, Dines told Steel that his mother had died and asked to money from him to to go to New Zealand to attend the funeral. It was all a fiction. ‘Those stories were a deliberate process of emotional manipulation, seeking to draw me close to him so he could spy on me and my friends and seek to undermine the political movements we were involved with,’ Steel said. ‘I did not know that at the time. It felt like I had met my soulmate. I loved him deeply and he told me that he love me.’

In the last six months of their relationship, Steel said that Dines’ behaviour became ‘erratic’ until one day he disappeared. ‘I received two letters posted from South Africa saying he was sorry but that he needed to sort his head out. I was distraught and worried about his well-being. I was worried he might even be suicidal.’

A couple of years later it occurred to Steel her ex might have been using an alias. Returning from the McLibel trial one day, she went into St Catherine’s house, the general registry office, and discovered that the real ‘John Barker’ had been a child who died at the age of eight years. ‘This discovery left me with a massive void. I had been living with someone for two years and I did not even know who he was,’ she said.

Steel said that she knew of 20 women similarly deceived into relationships with undercover police officers. ‘What seem like individual sob stories and emotional outbursts from the men were repeated patterns of behaviour that could only have come through a training program. It represents institutional sexism that the police thought it was okay to abuse women in this way.

In November 2015 the Metropolitan Police apologised to seven women deceived into forming ‘abusive and manipulative’ long-term relationships with undercover police officers four years after the women launched legal action against the police, alleging the deception caused them emotional trauma.

‘Despite this apology we’ve still had no answers as to how or why the abuse happened and absolutely no disclosure,’ Steel said. ‘Despite this apology, the police and other government agencies are doing their level best to ensure none of the officers or their supervisors are held to account for what they did. The Crown Prosecution Service has refused to charge any of the offices.’

Steel pointed out that the present inquiry chair, Sir John Mitting is a member of the men-only Garrick club. ‘How can someone who accepts the principles of the membership of such club be acceptable for a role that involves investigating sexist practices and making judgements upon institutional sexism?’ she asked 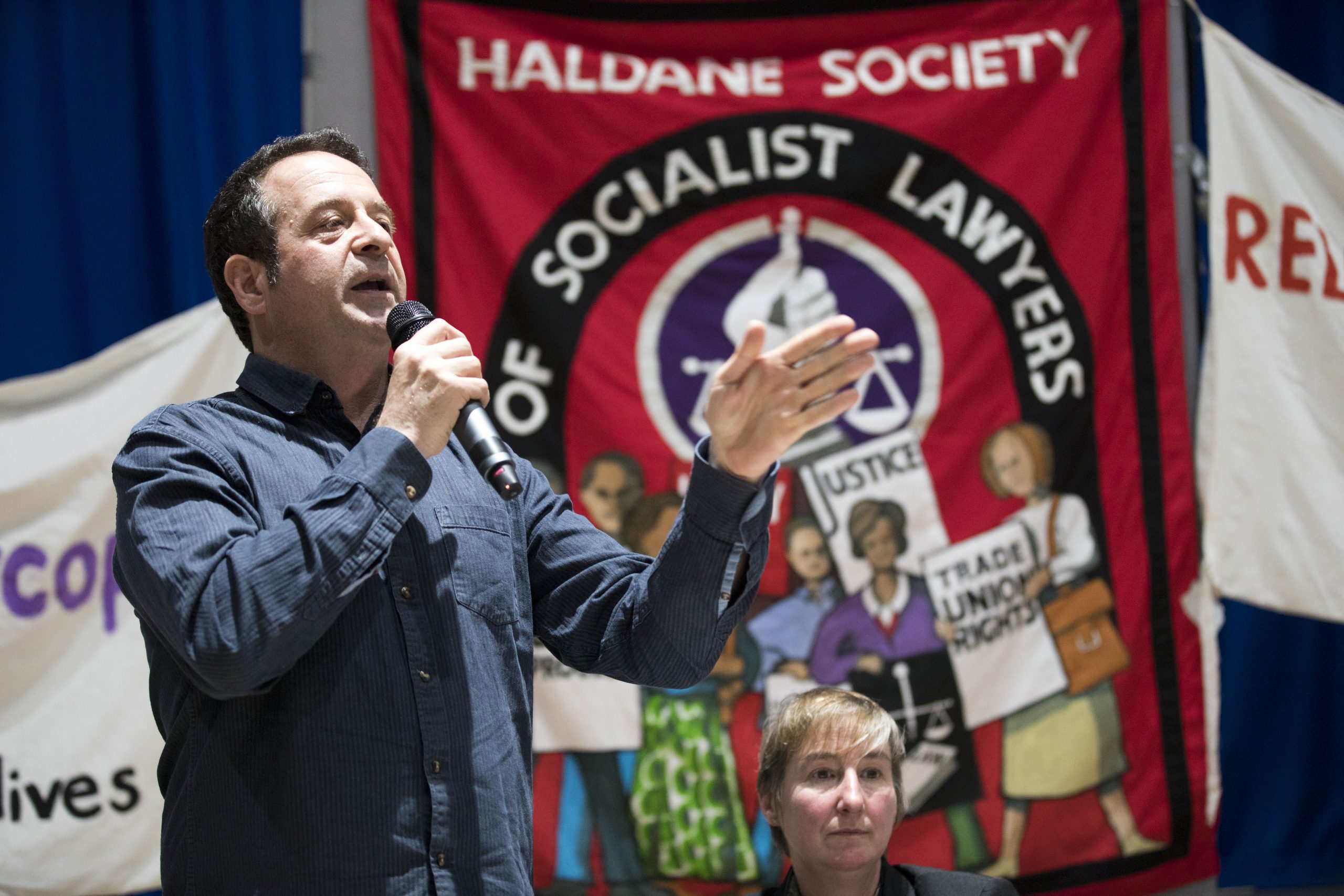 ‘Domestic extremist? I once used marge in a Victoria sponge’: Mark Thomas

The comedian and activist Mark Thomas spoke of his own experiences when he was betrayed by the one of a group of anti-arms industry campaigners who was spying on the group for the arms company BAE systems. ‘It was Martin who we most trusted. He was the one we all wanted outside looking after us,’ Thomas told the meeting. ‘People like him have been employed to gain confidence and inveigle their way into our lives.’ That episode was the subject of Thomas’s one-man show Cuckooed.

Thomas, who was also on the construction blacklist, is currently suing the Metropolitan Police together with five journalists (including the photographer Jess Hurd). They discovered that they were on the domestic extremist database after requesting to see their own files themselves under the Data Protection legislation. ‘I think the most extreme thing I’ve done domestically is use marge in a Victoria sponge. That’s it,’ Thomas quipped.

The journalists are being represented by the solicitor Shamik Dutta, who is also acting for nine core participants in the Mitting inquiry.

‘You do not need to have done anything wrong to get on the radar of the state,’ Dutta said. ‘The state believes it can retain data about individuals, not only on the basis that someone has been a domestic extremist but simply because they want to gather as much information as possible about all of us in order to make their lives and jobs easier. We are having vast haystacks of information gathered by the state and it is becoming more difficult for them to find needle. It is self-defeating.’

The solicitor said that all his clients in the undercover police enquiry were involved in campaigns in which ‘those implicated in wrongdoing and malpractice and in many cases deaths in custody were agents of the state’. ‘Those campaigners and those families have fought for many years for their loved ones who have died and against police misconduct in general,’ he said. ‘They have all discovered that they are on the radar of undercover police units.’

'Little faith' in spy cops inquiry getting to truth
Spycops inquiry: Doreen Lawrence 'losing confidence'
Episode 11: 'This inquiry is pandering to the police'
Spycops inquiry: ‘An establishment cover up taking place…
Episode 2: 'This isn't spying on terrorists. This is…