‘We are not the dirt we clean’: Marisol’s story

‘We are not the dirt we clean’: Marisol’s story 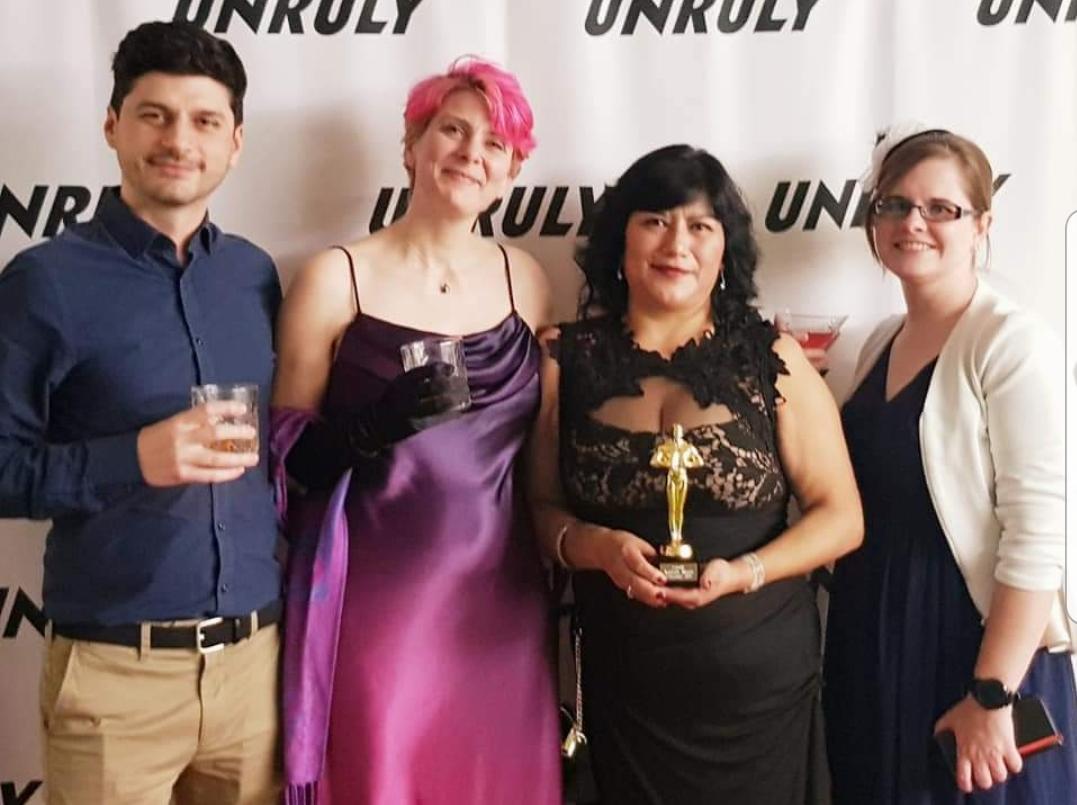 Marisol - with trophy - and her Unruly colleagues

Marisol Urbano came to London from Ecuador in 2013. A cleaner for City-based advertising agency Unruly, her extracurricular campaigning work was used to highlight the company’s commitment t​o diversity on International Women’s Day. However, as soon as Coronavirus hit, she lost her job. In the second in our series about the plight of migrant workers during the pandemic, Finnian Clarke from the Justice Gap spoke to her about her experiences in the UK.

‘I’ve always loved working and even more so at Unruly. I always felt that I had the unconditional support of all the staff,’ Marisol told me. ‘It seemed like an organisation that helps migrants. They always promoted and supported me. I was considered one of the staff.’ She was invited to work leaving-dos as well as to office parties at the company’s Whitechapel offices that she and her mainly Latin American colleagues cleaned.

Unruly, which styles itself as one of the leading video ad platforms in the world, profiled Marisol on their website calling her a ‘generator of change’ and describing her as being from their ‘facilities staff’. They celebrated their colleague’s campaigning work in setting up a charity (the Family Emotional Wellbeing Project) to help tackle domestic violence and mental health issues within the UK’s Ecuadorian community. ‘At Unruly we believe it’s key to highlight the work being done across our organisation throughout the year – not just on March 8 (International Woman’s Day),’ a blog read (here). 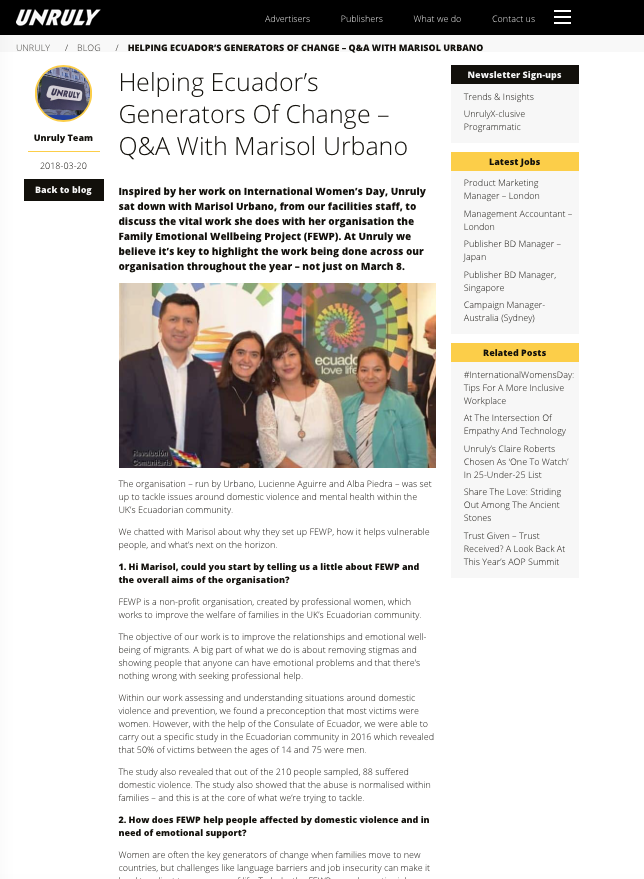 Whilst part of the team in the good times once the Coronavirus crisis hit, Unruly cut contact. Instead, the company which was purchased by Murdoch’s NewsCorp in 2015 for $58m and sold earlier in the year requested that the outsourcing company (Peartree Cleaners) put her through a gruelling redundancy process.

Marisol Urbano’s experience is typical of the experience of the many vulnerable migrant workers who do the jobs that have become so essential during the pandemic; but have also proved so disposable as workers increasingly stayed at home.

As of last month, 242,501 people have been made redundant in the UK with more than a third of firms planning to make redundancies. According to research undertaken by campaign group Hope Not Hate, black and minority ethnic workers are almost twice as likely to report losing jobs since the start of the pandemic (7% compared with 4% nationally from May and 3% from June).

The Resolution Foundation has reported that over one in five BAME workers who were furloughed during lockdown have since lost their jobs. This is in part due to the overrepresentation of migrant workers in the sectors hardest hit by the virus, such as hospitality, cleaning and transport.

Companies like Unruly use outsourced contractors to get cleaning services undertaken on their premises. As the Coronavirus spread and people began working from home, the need for cleaners on-site fell away. The outsourcing relationship means that, when crisis hits and cleaners are no longer needed, companies like Unruly do not have responsibility for the workers: that falls on the outsourcing companies like Peartree. By August 2020, all of Marisol’s hard work and good relations with Unruly were taken away. The experience was ‘incomprehensible’, she told the Justice Gap. 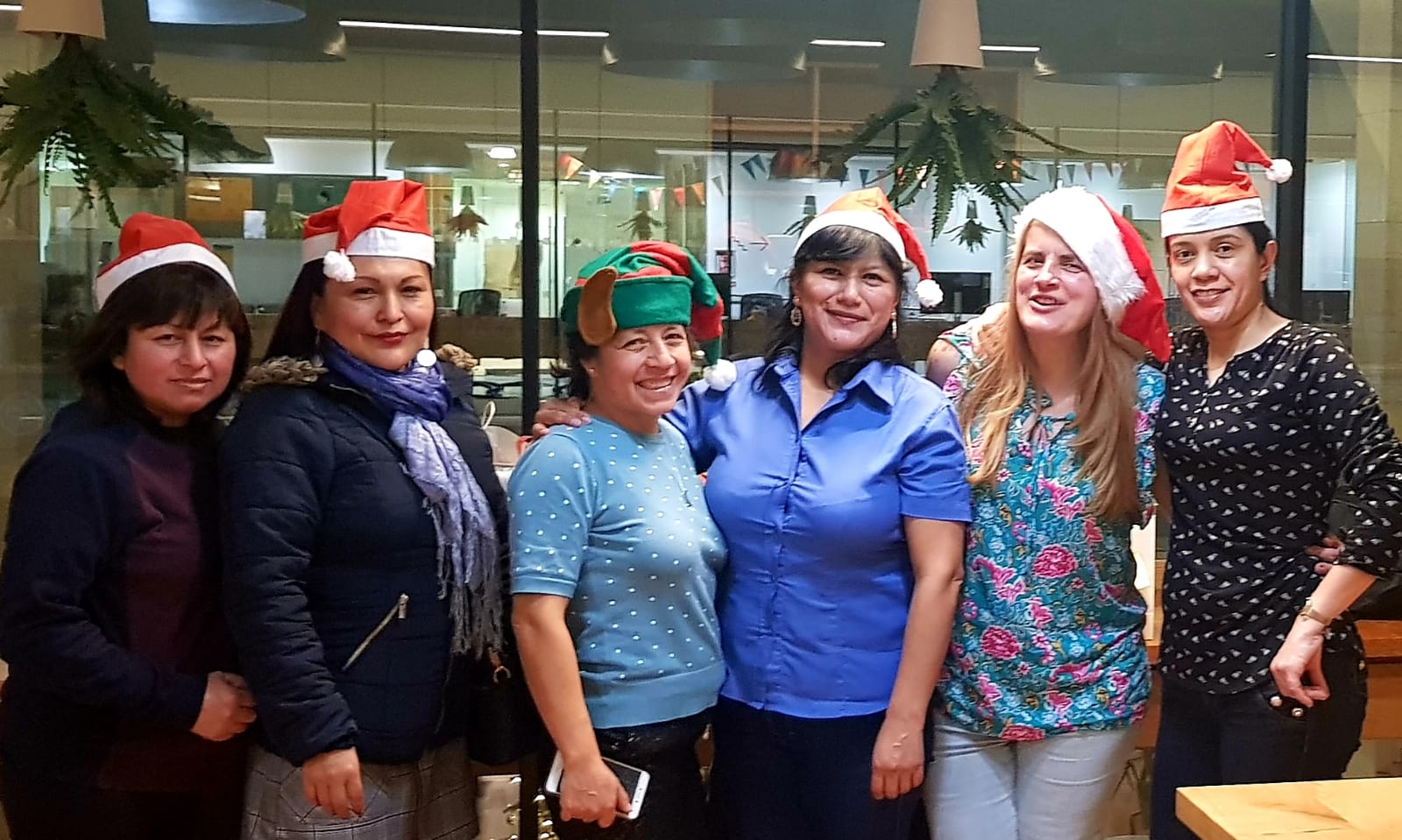 Marisol and her team at an office party

Camila Marin, a colleague and caseworker at Marisol’s union United Voices of the World, explains the redundancy process. Workers at Unruly were sent letters from Peartree telling them their jobs were at risk on the basis that Unruly had requested their removal. When their union asked for more information and evidence, none was provided. They attended an initial meeting and a week later at a second meeting they were informed that they were redundant.

According to Camila Marin, the small team of 11 cleaners at Unruly claimed to have experienced a number of irregularities. ‘One worker claimed not to have been consulted at all, and another said he was informed he was being made redundant at his first meeting.’ Peartree and Unruly were approached to respond for this article.

Camila Marin explains that outsourced workers are not offered the same protections as staff. ‘Often they aren’t paid in line with their statutory rights, dismissed without due process, and not provided with payslips or their employment contracts. Harassment, bullying and discrimination are also common complaints form the workers we represent,’ she says. In the end, each worker is paid their weekly wage multiplied by their years of service (adjusted according to age). And so in the middle of the pandemic, Marisol Urbano – a mother of two who cares for her own elderly mother – was paid less than three months’ wages on which to survive whilst looking for a job.

‘A high proportion of workers within this sector are on zero-hour contracts or else they are not afforded employee status,’ comments Camila Marin. ‘This means that they have fewer rights as workers and it is a lot more challenging to have their rights respected. As language barriers and lack of knowledge regarding employment law are prevalent amongst this sector of workers, they are often coerced into accepting illegal treatment by their employers. Their financial precariousness and need to provide for families in the UK as well as abroad also results in them accepting jobs with rogue companies.’

In Marisol Urbano’s case, the Coronavirus pandemic changed everything. She was furloughed after the lockdown and then told in August that all the Peartree cleaners at Unruly would be made redundant after years of service at the company. ‘I felt frustrated and impotent,’ she told me. ‘Our treatment was an insult to my loyalty to this company. My family has also suffered along with me. I have been forced to apply for Universal Credit as I have to look after my daughters and my elderly mother, none of whom work.’

Marisol had been with Unruly since she arrived in London in 2013 after she was hired by the outsourcing company Peartree Cleaning. She was of a team of 11 workers who all came from Latin America including some who had been working at that workplace for ​almost a decade.

Marisol grew up in Quito, Ecuador. ‘In many ways, it was an ideal family environment. We could have economic problems but we also had a social cushion that made up for it. But there were few guarantees of security and nothing viable in the long term.’ When financial crisis hit in 1999, she and her family decided to Spain.

Having lived and worked in Madrid for a number of years, Marisol came to London in 2013 with her two daughters and elderly mother in order to find greater security for her family. She began working for Unruly as a cleaner in 2013,. ‘When they hired me, it gave me the opportunity to get recognition and an identity as a worker, first as a cleaner and then as a supervisor.’ In addition to her regular cleaning hours, she was in their Whitechapel offices from 7PM to 9 as a supervisor.

A colleague of Marisol’s, who wishes to be kept anonymous, told us that being fired during a pandemic was ‘sad and stressful’. ‘There are no jobs,’ she says. Marisol agrees; but insists that their experience of ‘toxic bosses’ is ‘one more learning experience’. ‘I will continue to be a rebellious and resistant woman, generating social change and, above all, fair labour relations.’

'We are not the dirt we clean': Migrant workers during the…
Cetin's story: 'We’re there looking after everyone while…
'Workers with a union to back them can move mountains'
Security guard who led strike against outsourcing to take…
Equalities watchdog urged to investigate pandemic's…