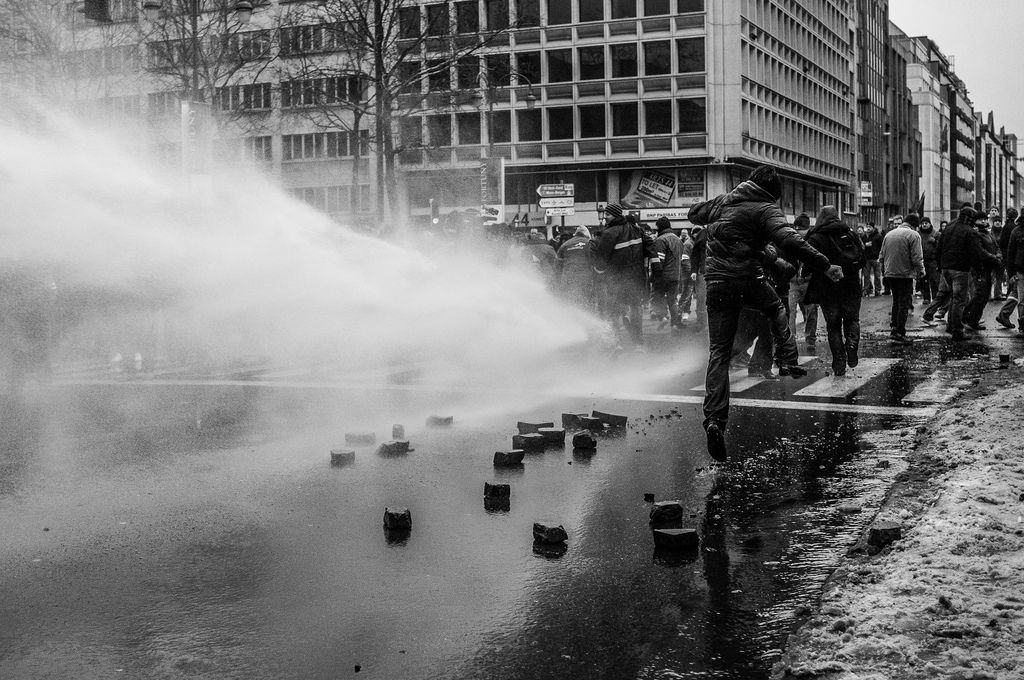 On 10 June, the Mayor of London’s Office for Policing and Crime (MOPAC) announced that it had given the Metropolitan Police Service permission to purchase three second-hand water cannons, pre-empting the Home Secretary’s authority for the weapons to be used on the British mainland.

Since that announcement, debate has raged about the safety of the weapons and their capacity to kill or to maim, culminating in Boris Johnson’s offer to be ‘blasted’ by water cannon to ‘prove’ their safety.

This is the wrong debate.

As with all weapons, water cannon are neither ‘safe’ nor intended to be ‘safe’. Water cannon are not garden hoses but ‘less lethal’ weapons for use in dangerous, violent situations.

The Association of Chief Police Officers’ own, somewhat ambiguous, briefing paper notes that ‘the term “less lethal” (as opposed to non-lethal) accepts that water cannon are capable of causing serious injury or even death’. Although not designed to be aimed directly at humans, it is inevitable that humans will be caught in the line of fire and equally inevitable that some of those humans will be hurt, injured and possibly killed.

Rather than quibble about the relative ‘safety’ of a weapon, the questions we should ask are:

MOPAC has employed no little sleight of hand in respect of the intended purpose of water cannon, with their spokesman referencing ‘learning from the riots of 2011′ when commenting on the purchase of the weapon.

Water cannon are not designed for use in the agile protests which characterised the 2011 riots. They can, however, be used to separate rival crowds or separate a protesting crowd from the object of that protest. In the words of a police officer, water cannon ‘provide reach, which provides distance, which provides protection for static police lines’ and they in turn need re-arming and protecting, thus tying resources to a static point. So the purpose of the purchase of water cannon is not to deal with fast-moving riots similar to those of 2011 but to cope with another kind of protest entirely.

Do we, the people, consent to that purpose?

The second of the Peelian principles states that ‘the power of the police to fulfil their functions and duties is dependent on public approval of their existence, actions and behaviour’.

Do we approve of and consent to the purchase of a weapon, the very presence of which may prove inflammatory, which contributes to an increasing mechanisation and militarisation of policing, which further and physically distances the police from the public? Richard Seymour believes that the use of water cannon is a move towards ‘treating protest as something to be crushed and thus tilting the balance of power further away from citizens and toward the state.’ Do we consent to that imbalance?

Are water cannon the right tool for their intended purpose? Now we stray into the realm of crowd psychology and evidence-based policing.

In his scholarly and well-evidenced report for MOPAC’s public consultation into the proposed introduction of water cannon, Dr Chris Cocking explains that:

Crowds may initially scatter briefly once water cannon is deployed and used[but] any such scattering would be momentary, and rather than dispersing from the area, crowd members would quickly re-group, with increased collective militancy more likely. Therefore, water cannon’s effectiveness in quelling disorder would be minimal, and possibly even counter-productive, in that I believe its use would be more likely to increase any such disorder. It is also possible that the very appearance of water cannon could generate increased crowd militancy and result in the crowd attacking such a visible and symbolic target.’

Similarly, Dr Clifford Stott’s 2009 submission to HMIC notes that ‘indiscriminate use of force can [ ] somewhat ironically contribute to a widespread escalation in the levels of public disorder’.

Dr Cocking is an expert in crowd behaviour while Dr Stott’s research focuses on the social psychology of crowd conflict and its relationship to public order policing. One would hope that expert evidence which so compellingly indicates that use of water cannon might exacerbate disorder would militate against the purchase of said weapons but it seems that compelling, expert evidence is insufficient. When these papers were recommended to a Police and Crime Commissioner who was previously a police officer, his response was simply “I disagree”.

Finally, have both purpose and tool been given democratic legitimacy? The apparent purpose of the weapons has been allowed to become enmeshed in the public mind with the desire to avoid a repeat of the events of 2011, even though the tool is wholly inappropriate for that apparent purpose. Meanwhile, the Mayor’s decision appears to have outmanoeuvred the Home Secretary, who has not yet sanctioned the use of water cannon on mainland soil. Is it likely that, once the weapons are purchased, the Home Secretary will refuse to authorise their use? Would MOPAC have approved the purchase of the weapons without a least a tacit assurance that their use would be legitimised? And once the weapons are in the hands of the MPS, how long will it be before a reason is found for their use?

If the Home Secretary or the Mayor or the Deputy Mayor with Responsibility for Policing and Crime really wish to reduce the risk of unrest, rather than using the indiscriminate threat of water cannon to cow a disaffected populous, they might be better advised to link that disaffection to the increasing levels of inequality and social injustice and with the cuts which have decimated the pro-active and protective nature of neighbourhood policing and then to listen to the expert voices which are so clearly warning of pitfalls ahead. Otherwise, the introduction of water cannon onto the British mainland may prove to be the beginning of the end for policing by consent.

Rachel worked for Her Majesty's prison service from 1992 to 2001, starting as an officer at HMP Brixton and finishing as a deputy governor at HMP The Verne. She is a qualified teacher and currently works in the field of children's rights. You can follow her on twitter at @DorsetRachel.

Our print magazine is Proof. Contributors include Michael Mansfield QC, Bob Woffinden, David Rose, Eric Allison and Ian Cobain.
Buy Proof Magazine
The latest issue (Why legal aid matters) includes Helena Kennedy QC and Martha Spurrier in conversation, David Conn on the legacy of Hillsborough - plus how to build your own law centre.
Rachel worked for Her Majesty's prison service from 1992 to 2001, starting as an officer at HMP Brixton and finishing as a deputy governor at HMP The Verne. She is a qualified teacher and currently works in the field of children's rights. You can follow her on twitter at @DorsetRachel.