Sadiq Khan: ‘I want to be the first justice secretary from Tooting’

Sadiq Khan: ‘I want to be the first justice secretary from Tooting’ 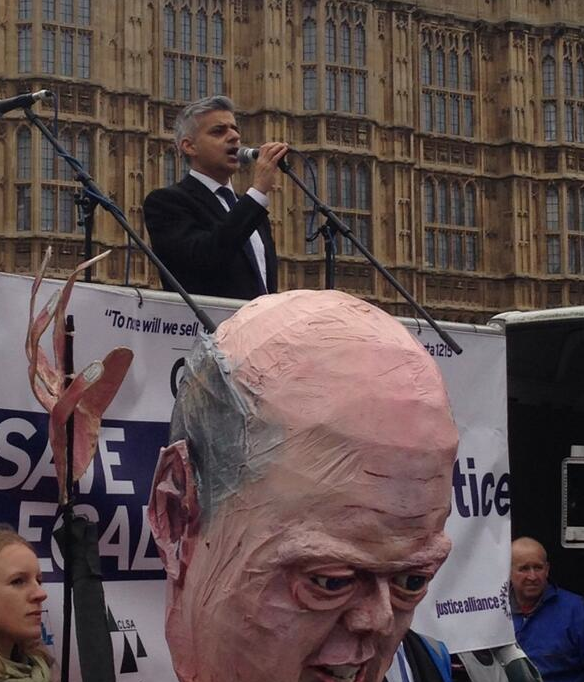 INTERVIEW: ‘The job I really want is Chris Grayling’s, not Boris Johnson’s,’ says shadow justice secretary Sadiq Khan when we met earlier this month at his office in Portcullis House. ‘I want to be the first justice secretary from Tooting,’ he adds.

Tipped to run for London Mayor in 2016, Khan’s counterpart Chris Grayling recently accused him of having a ‘manifesto for London’, with justice coming ‘almost as an afterthought’. But whilst he doesn’t rule out the prospect of running for mayor – ‘if I was at the edge of the box and the ball came my way and I thought I had the best chance of scoring then I might go for it’ – Khan is determined to convince me that he has his sights set on the justice department for now. ‘London is the city that I love,’ he says. ‘But the job I’m doing I love. For now I want to be the justice secretary.’

A former human rights lawyer, Khan would certainly be more qualified for the conjoined role of secretary of state for justice and Lord Chancellor than the current holder of the position. At the Justice Alliance rally for legal aid last summer, Khan declared Grayling to be the ‘most legally illiterate Lord Chancellor in the history of the office’ – a label that he repeats twice during our conversation. ‘He just doesn’t understand the constitutional significance of rights, of legal aid, of courts, of the separation of powers,’ says Khan, reminding me that Grayling is the first Lord Chancellor in 400 years who is a non-lawyer.

Champion of the underdog
One of eight children, Khan grew up in a council house in South London and went to the local comprehensive school. His father was a bus driver and his mother a housewife. Khan was destined to become a ‘well-paid dentist’ after doing science A Levels, he tells me, but switched to a law degree at the last minute after his maths teacher told him he was good at arguing and he started watching the American television series LA Law.

‘I also had friends who would get stopped-and-searched, or get in trouble with the police when they had done nothing wrong,’ he says, on a more serious note. ‘And I thought that was the sort of law I would want to do – I would want to be the lawyer who acted for the underdog.’

Was it difficult for him to gain access to the profession coming from a working class background? ‘Absolutely,’ he says. ‘I didn’t talk the way other lawyers talked; I didn’t have the contacts that other people at law school had.’

He thanks the voluntary work he did while he was at school and university – such as volunteering at his local law centre – for securing him a traineeship at Louise Christian’s radical firm Christian Fisher (later to become Christian Khan when he was made a partner). Khan specialised predominantly in actions against the police during his time as a solicitor at Christian Khan. He also spent three years as chair of the National Council for Civil Liberties (NCCL) – now Liberty – and a number of years as vice-chair of Legal Action Group.

A once in a lifetime opportunity
So what lured Khan into politics after 11 years at the coalface of human rights law?

‘The answer is simple,’ he says. ‘When you’re a lawyer doing a good job, your cases can set precedents. And that precedent improves the quality of life not just for your client but, if you’re lucky, dozens and maybe hundreds of people. But if you are a legislator, let alone in the executive, you have the ability to make laws that change the lives of millions. And if you can add to that being the MP of your neighbourhood – where you can represent your friends, your family – it was a once in a lifetime opportunity and I couldn’t say no to it.’

Khan only ran for one seat – Tooting – and if he hadn’t been selected as the Labour candidate he would have stuck with his legal career, he tells me. Since he was elected in 2005, he has held the portfolios of minister for communities and local government; minister of state for transport and his current positions, shadow minister for London and shadow justice secretary.

Khan is particularly scathing about his opposite number, Chris Grayling, each time the conversation turns to what has arguably dominated his stint as shadow justice secretary – the legal aid cuts. He accuses him of breaking promises and making ‘severe’, ‘stark’ and ‘draconian’ cuts which break the rule of law, limit access to the profession, reduce state accountability and dismantle the third limb of the welfare state.

But Khan told MPs in 2011 – when austerity was at the top of parliament’s agenda – that the legal aid budget, in its then form, was ‘unsustainable’. ‘Let me be clear,’ he said. ‘Had we been in government today, we, too, would have been announcing savings to the legal aid budget.’ Does he stand by his commitment to cutting to legal aid?

‘We’ve got to be honest with the British public. When Labour left office, the legal aid budget was £2.1bn out of an overall MoJ budget of £8.5bn. That’s a lot of money. If you want to make savings you can’t cut courts, you can’t close prisons, you can’t cut probation, so the point that I make and I still make is: there are savings to be made.’

Apples and pears
So how would he have made the savings? ‘What I wouldn’t do is slash £350m from the civil legal aid budget in the Legal Aid Sentencing and Punishment of Offenders Act (LASPO), and then another £220m from crime like Grayling’s doing now,’ says Khan. Instead, he would look at ‘inefficiencies in the justice system’, he tells me – delays caused by the CPS not disclosing papers, or prisoners not being brought to court on time, for example.

‘What you don’t do is, without understanding the consequences, make the cuts that Ken Clarke and Chris Grayling have both made,’ he says. The argument they have made, according to Khan, is ‘too simplistic’. ‘They are saying that the cost of legal aid in an adversarial system can be compared to the cost of legal aid in inquisitorial systems in other jurisdictions, such as France. They’re comparing apples with pears. We have different legal systems.’

Khan also reckons Grayling ‘picks his opponents based on how weak they are’, which is why he has targeted legal aid lawyers – characterising them as ‘fat cats’ in the hope the public will not sympathise with their plight.

‘The idea that there are people at the junior bar or working in legal aid firms earning six figure salaries is a joke and we’ve got to get that across,’ says Khan. He is worried that the low-pay in legal aid law, coupled with the huge debts accrued in qualifying, will deter candidates from low-income backgrounds practising in legal aid law in the future.

‘We’ve made huge progress but all that progress we’ve made is being undone. We’re returning to the situation where – unless mummy and daddy are rich enough; unless you’ve been to a public school – you can’t think about a career in the legal aid profession. And that’s heart-breaking for me.’

The criminal side of the profession is so up in arms about the cuts that solicitors and barristers last week staged an unprecedented full-day walk-out in protest. Does Khan support lawyers striking to save legal aid?

‘It’s for barristers and solicitors to decide how they individually campaign but the best thing they can do together – which they are doing – is to bring together the recipients of legal aid, to explain in their own words why it’s important,’ he says.

Khan names the Ghurkas, Jean Charles de Menezes, the Lawrence family and Gerry Conlon as people who would not have got justice under the government’s new legal aid regime. ‘It’s very important we get the British public hearing the voices of people who have benefitted from legal aid,’ he says. ‘That to me is far, far more important than lawyers explaining why it is in their interest.’

As outspoken as he is against Grayling’s cuts to legal aid, Khan won’t pledge to reverse them if Labour are elected in 2015. ‘It’s not as simple as that,’ he tells me. ‘That’s the sort of thing that lawyers who are angry – but naive – say. The budget in 2010 was £8.5 billion. In 2015, it will be £6.5 billion. There simply isn’t the money there to restore the cuts made in LASPO, or in the criminal stuff.’

Crocodile tears
Khan reckons the cuts to legal aid are just one aspect of a ‘pattern of behaviour’ of the coalition government, whereby ‘they’ve tried to reduce the ability of the citizen to hold the executive to account.‘ He lists the government’s plans to withdraw from the European Convention of Human Rights (ECHR), changes to Freedom of Information requests, changes to judicial review, and ‘gagging NGOs’ via the lobbying bill as further examples.

Seizing another opportunity to criticise Grayling when the subject turns to the government’s new Criminal Justice and Courts Bill – which introduces measures to restrict judicial review – Khan says: ‘He’s diluting the ability of community groups and citizens to hold power to account. He doesn’t think they should be able to do so. There’s an arrogance from this lot – they think they are born to rule. But even the underdog deserves the opportunity to challenge power.’

‘The disgraceful thing – and it’s disgraceful – is how the Liberal Democrats have propped them up and allowed this to happen. What I find nauseating is the likes of Simon Hughes or Nick Clegg – the crocodile tears they have. They should be held to account because Chris Grayling could not do what he’s doing but for the support of the Liberal Democrats.’

Despite numerous damning attacks on the current government – and in particular the justice department – throughout our conversation, Khan reiterates that he will ‘not fall into the trap of saying there is a get out of jail free card if the cuts go through’ because he doesn’t want legal aid lawyers to ‘give up the fight.’

‘We can’t be defeatist,’ he concludes. ‘But at the end of the day if we don’t win on this particular round, we’ve got to make sure that we get them out so we can start repairing the damage.’