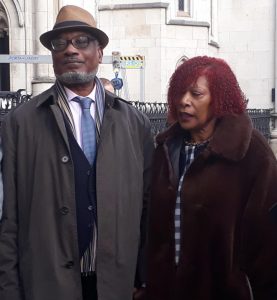 Winston Trew with his wife Hyacinth outside the Court of Appeal

On Thursday the 5th of December 2019, Winston Trew walked out of the Court of Appeal with his convictions for pickpocketing and assault of a police officer quashed. It took 47 years for the courts to acknowledge his and the Oval four’s convictions were secured with false evidence provided by a corrupt officer.
In this latest episode of Unjust, we explore Winston’s search for the truth and justice for the Oval four. If you haven’t listened to the first part, stop here. Go back and listen, part one details the event that initially led them to prison.
Winston knew Detective Sergeant Derek Ridgewell was dishonest. After all, he had been the arresting officer who fitted the four young black men up as they left Oval Station in March 1972. But the extent to his corruption was not discovered until years later. 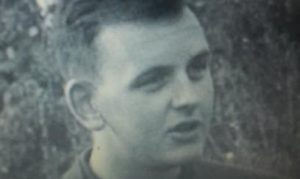 In 1980, Ridgewell himself was convicted for the theft of Royal Mail bags and handed a seven year prison sentence. And that’s where, in 1982, he died. Using the Freedom of Information Act, Winston discovered his wrongdoings did not stop at theft, though.
For years before his conviction, Ridgewell had been the focus of calls for an inquiry into his behaviour from Judges, an MP and a civil liberties group. Winston, it transpired, was just one of at least 16 young black people who were fitted up by the corrupt officer:

Winston documented all his findings in his book Black for a Cause.
There was another case that Winston didn’t know about. Three young white men from South West London, Stephen Simmons and his two friends, were arrested and wrongly convicted of the theft of Royal Mail bags; the same charge that would eventually see Ridgewell himself sentenced to seven years in prison.

Stephen spoke to me for the podcast: ‘You just think it’s all going to get blown over. It didn’t dawn on us until the jury came back and said guilty’.
Again, for almost 50 years, Stephen was plagued by his wrongful conviction. Then, one day he phoned into LBC’s Legal Hour with Daniel Barnett and was given some advice that would change his life. He was told, why not google the officer?
He did, and discovered Ridgewell’s wrongdoings. ‘I wanted to throw my computer out of the window’. He then applied to the CCRC and with their help, his conviction was eventually overturned in January 2018. 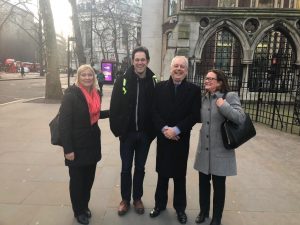 Winston Trew was in the public gallery, ‘my book was quoted as part of the evidence. I was over the moon. So then I applied to the CCRC based on [Stephen’s] victory to have my case reviewed’.
Again, with the help of the CCRC, Winston’s conviction was overturned in December 2019. Sterling Christie, another member of the Oval 4, also had his conviction overturned that day, before he sadly passed away earlier this year. The remaining two members, George Griffiths and Omar Boucher, had their convictions overturned in March 2020.
‘Finally, there were only two of us in our marriage, me and my wife’, Winston said. ‘Ridgewell’s no longer part of our marriage’.

Episode 7 of Unjust explores Winston’s search for justice with the help of Stephen Simmons and their lawyer Jenny Wiltshire. Listen below or on iTunes, Spotify or wherever you download your podcasts.