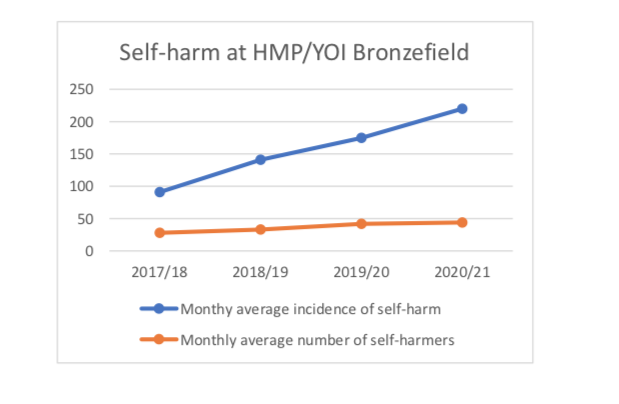 More than three-quarters of prisoners leaving the largest women’s prison in Europe were released without safe and secure accommodation. The latest report by the Independent Monitoring Board (IMB) into HMP Bronzefield Prison, a privately-run prison in Surrey run by Sodexo Justice Services, calls on the government to take ‘urgent action’ to address the lack of an accommodation service previously provided by homelessness charity, St Mungos.

Five years ago it was revealed that women had been given tents and sleeping bags on their release because they had nowhere to live. The IMB found that the removal of the service resulted in a record number of prisoners (77%) being released without safe and secure accommodation which was up from 60% last year. St Mungos left when the contract for the community rehabilitation company (CRC) ended in June this year. The watchdog also directed a question toward Sadiq Khan asking what the London Mayor’s office for policing and crime had done in the last year to increase the availability of accommodation for those women who leave prison with no fixed abode.

The IMB reported a steep increase in self-harm incidents every month. The findings showed an average of 220 incidents per month, with 371 incidents in June 2021 alone. Severe Covid-19 restrictions reportedly ‘compromised the ability to treat women fairly and humanely’, instead prisons were used as ‘a place of safety’ for severely mentally ill women. These women, the report found, put ‘severe pressure’ on the healthcare unit and residential houseblock.

IMB Bronzefield chair Alison Keightley said that there were ‘an unacceptably large number of women’ leave Bronzefield without safe and secure housing, particularly those released into London. ‘This number has increased since the restructuring of probation services reduced access to in-prison specialist advice,’ she continued. ‘It exposes women to unnecessary risks, increases the chance of reoffending, and urgently needs to be addressed.’

‘The findings of this report are utterly shameful, exposing just how many vulnerable women are being set up to fail,’ commented John Plummer of the Safe Homes for Women Leaving Prison initiative. ‘Despite the fact that the Ministry of Justice has repeatedly claimed that it understands the importance of providing safe housing for women leaving prison to prevent further abuse, exploitation or reoffending, it appears that the situation has gotten worse and not better. It is a stark reminder that warm words from the Government are simply not enough, we need action now in order to stop the preventable crisis of women leaving prison to homelessness.’

Bronzefield made headlines recently following the death of a newborn baby within its walls after an 18-year-old inmate gave birth alone in her cell; and in 2016, it was revealed that prison-leavers were given sleeping bags and tents upon release because they had no where to live.

Dami writes about the justice system and miscarriages of justice. She’s on Twitter at @DamiOjuri

Our print magazine is Proof. Contributors include Michael Mansfield QC, Bob Woffinden, David Rose, Eric Allison and Ian Cobain.
Buy Proof Magazine
The latest issue (Why legal aid matters) includes Helena Kennedy QC and Martha Spurrier in conversation, David Conn on the legacy of Hillsborough - plus how to build your own law centre.
Dami writes about the justice system and miscarriages of justice. She’s on Twitter at @DamiOjuri