‘This conference is about hope. We are the people who have to make the change’

‘This conference is about hope. We are the people who have to make the change’ 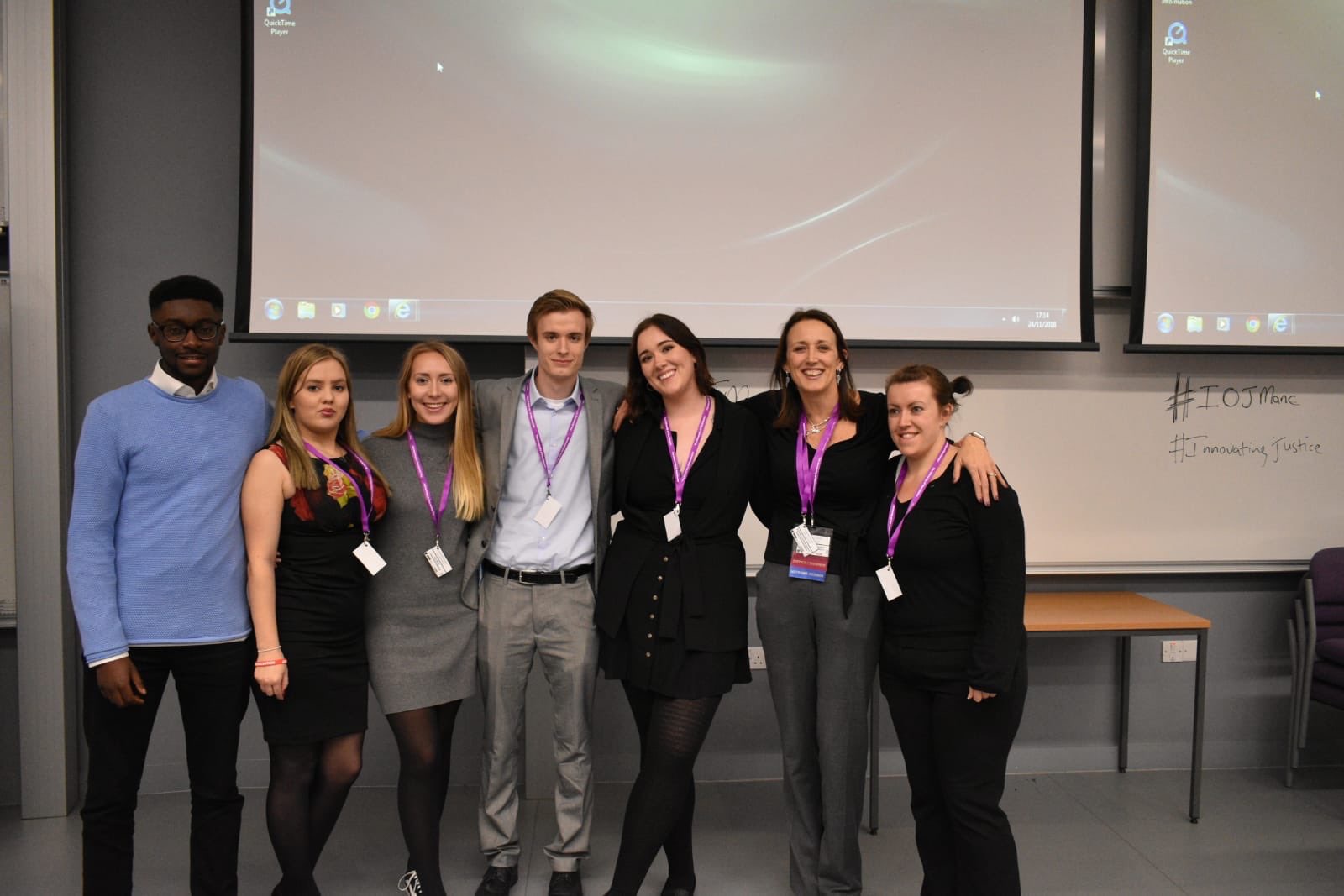 The Innovation of Justice team at the Manchester conference

Innovation of Justice came to Manchester last month, the brainchild of Liam Allan. Liam is the media’s non-disclosure ‘poster boy’ who spent two years in a limbo that could so easily have seen him wrongfully convicted of rape.

A definite theme emerged from the heart-rending stories of the powerful speakers – that ‘ordinary’ members of the public have no idea about the multiple, serious, problems with the criminal justice system. The Secret Barrister has re-scratched the surface, but there is a pressing need to work together to find a way of getting the message out there, and to engage politicians.

‘If it could happen to Liam, it could happen to anyone,’ said his barrister Julia Smart. Her ‘kitchen table epiphany’ was a stroke of good fortune that could so easily instead have seen Liam serving a 10 years plus prison sentence for something he hadn’t done.

These conferences are as impressive and uplifting as they are deeply troubling and depressing, because of the consistency of the message and experience: deja vu comes around – again. They expose the ongoing deep-rooted intellectual dishonesty of a system that is hell bent on saving the reputation of the establishment at the expense of destroying the lives of many innocent people and their loved ones. And, outside of audiences typical of this one, no-one seems really to be listening.

Too much Brexit on politicians’ plates perhaps.

Does Liam think that’s going to change?  He told me:

‘The attendance was a huge shock. 150-200 people gathering in a room the day after black Friday was just incredible. But what really amazed me was seeing everyone interact, learn and support with issues they wouldn’t normally come into contact with. There was a real buzz in the room, filled with hope that there are better days ahead. Each and every person we spoke to has been spreading the word of the campaign and the numbers are really starting to increase. There is no better time than right now and for the first time, I believe even the innocents who have not yet had their justice, have something to hold onto, something to believe in. What we are creating doesn’t feel like a bunch of people just coming together for selfish interests or political agendas, it feels like a family is being built… One that supports each other through the hardest times and forms the changes that we would want for ourselves. It’s really something special and thus far, successful.’
Liam Allan

The bonds that Liam is developing with long-standing ‘heroes’ of the miscarriages of justice arena were evident, and touching.

‘Most people don’t have any dealings with the criminal justice system, so it doesn’t affect them.’ So said Eddie Gilfoyle to an audience that clearly considered his unsung hero status to be wholly justified. 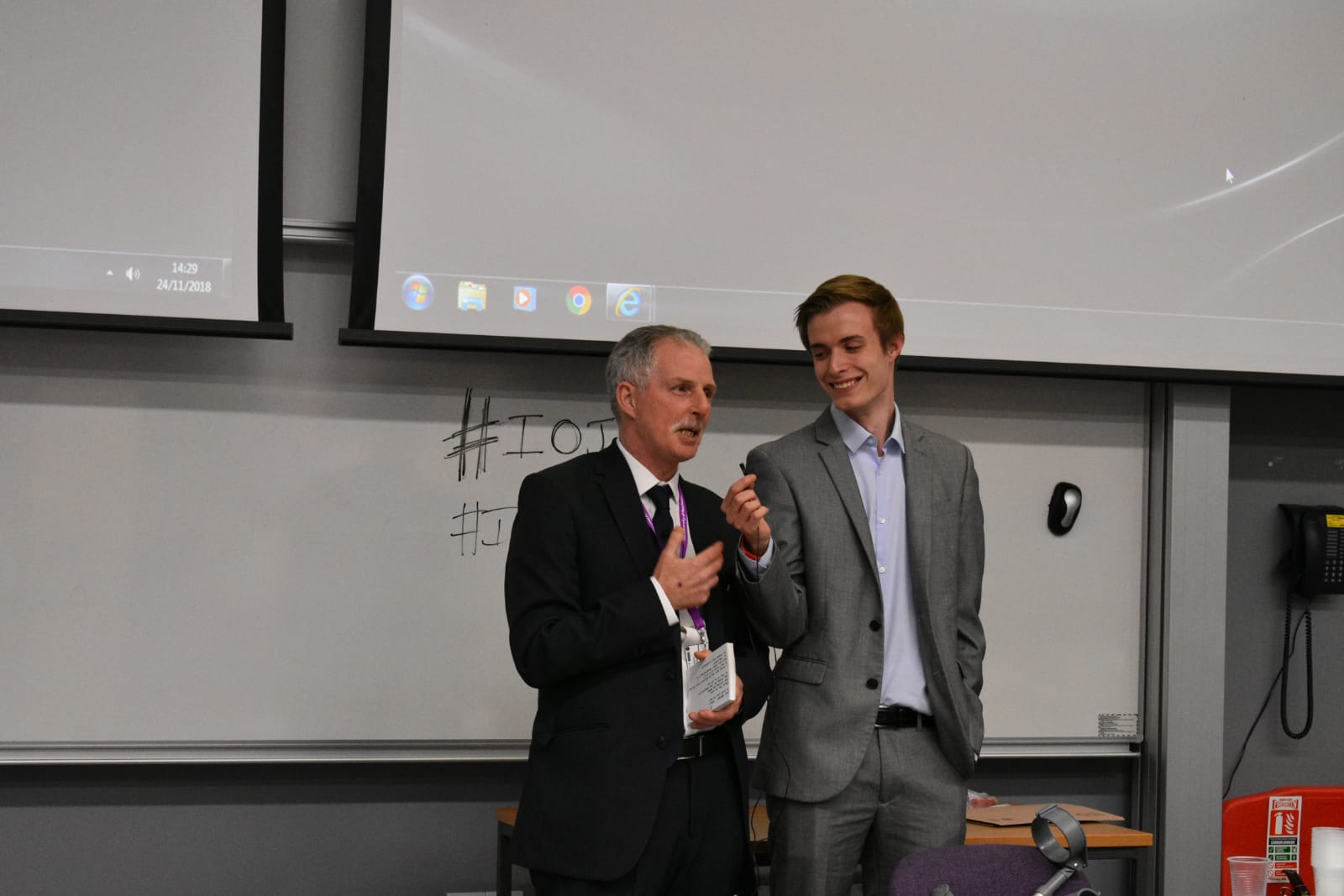 ‘The CCRC are part of the problem’: Eddie Gilfoyle with Liam Allan

Eddie served 18 years for a crime he says, and virtually everyone except the Criminal Cases Review Commission (CCRC) believes, he didn’t commit. He observed how ‘rotten, dishonest and cruel our justice system is‘ and how he had ‘had his eyes opened because of the foolish trust I put in our criminal justice system….and there are hundreds of others similarly let down. Even if you follow all the rules, the system makes it impossible for you to access the evidence you need’.

Eddie (justifiably) could not contain his  anger that the CCRC (and previously the police and CPS) had consistently failed to tell him about the undisclosed evidence.

‘The CCRC have now become part of the problem. The appeal court are just as bad – they never look at the case as a whole – they just cherry pick. They are there to uphold the verdict of the jury at all costs. They are there to protect the establishment that they are part of. The Court of Appeal cannot be independent. What chance do people like me have?
People like me paid a price for that dishonesty – all that matters is that the public believes the criminal justice system works. Fighting the establishment that is determined to win. Where do people like me go for help?‘
Eddie Gilfoyle

He told the audience that his MP, Lord Hunt, was with him every step of the way and was equally  frustrated by the Establishment rules. But still Eddie is fighting – without success. It seems that common sense and common decency haven’t yet made an appearance in Eddie’s case. It beggars belief that the CCRC have recently declined to refer his case.

Eddie’s powerful sentiments were amplified by his sister Sue Caddick, whose life has also been ruined by Eddie’s situation. ‘The loneliest place in the world is fighting a miscarriage of justice,’ she said. ‘Truth isn’t even a consideration – it is lost in a game they play in the courtroom. To them, the end justifies the means. It can never be a fair game if one side is cheating and not doing what they should.’

‘Excruciating‘ is the single word she chose to illustrate the family’s feelings, but it’s clear that this simple word cannot do justice to the depth of harm, despair and trauma suffered by the family.

‘Non-disclosure is a namby-pamby name they have made up to make it more acceptable to the public. It is hiding evidence. No amount of underfunding… excuses this blatant dishonesty.’
Sue Caddick, Eddie Gilfoyle’s sister

Eddie and Sue must have called upon huge reserves of personal restraint when they heard David James Smith, a recent former CCRC Commissioner, read from a script that could have been written for him by the CCRC’s public relations office. Liam, admirably, thanked Mr Smith for his courage in speaking at the Manchester conference, being in a clear minority in that room.  But I personally cannot resist concluding that Mr Smith was, far more than I have seen previously, out of his comfort zone at this conference. He has regularly attended many public events flying the CCRC flag – fair play to him for that.

But I was left with the distinct impression this time that his justification of the CCRC’s role and recent decisions was unsustainable and disingenuous – no more than lip service. To me, it seemed that he was not comfortable with what he was saying. His words were a hollow irrelevance to the incredulous audience, who were far more impressed and engaged by the building momentum of the other speakers’ diverse stories on the same haunting theme – our justice system isn’t working.

If the CCRC considers that the Court of Appeal is part of their problem, then this was another lost opportunity to start to address that fundamental issue, and to start building good faith relationships with key stakeholders, many of whom are reaching the end of their tether. 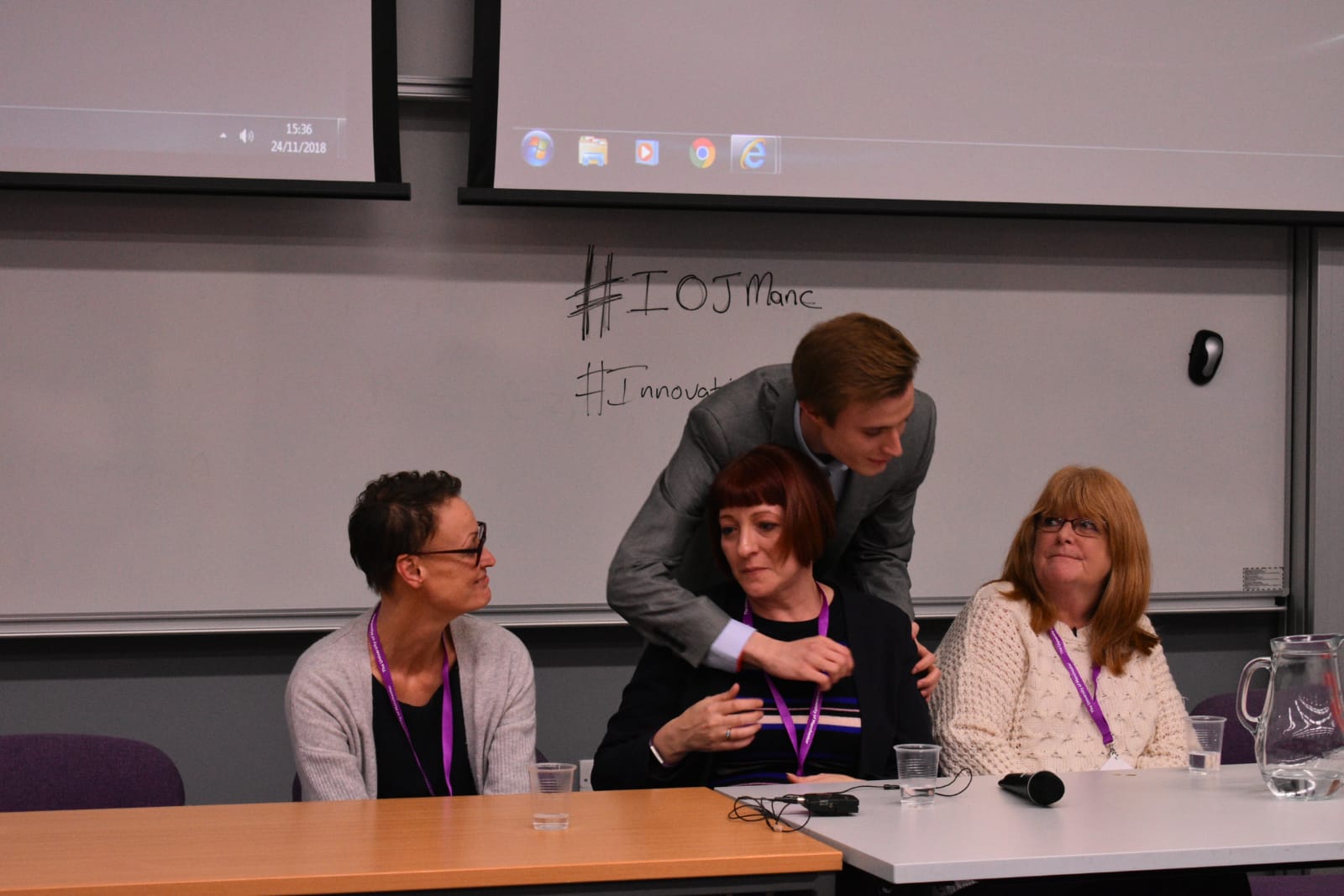 In closing the conference, Liam remarked that: ‘This conference is about hope. We are the people who have to make this change. We started this because we were lost and didn’t know where to go. The politicians are paying attention.’

Those of us who have been around this arena for many years are a bit long in the tooth. We remain out of choice, but innocent people and their families don’t have that choice. We have seen and heard all of this before. In the university world, we had huge hope and excitement when the Innocence Network UK (INUK) under Dr Michael Naughton’s leadership emerged 14 years ago. Some of our colleagues have been active in the campaigning world for much longer that that.

Take, for example, my colleague Dr Dennis Eady, who is still nobly ploughing on after more than 25 years, despite at least 17 case setbacks in his role at Cardiff’s innocence project. That represents 17 people (and there are many more) who may be innocent, but can’t get their cases heard. 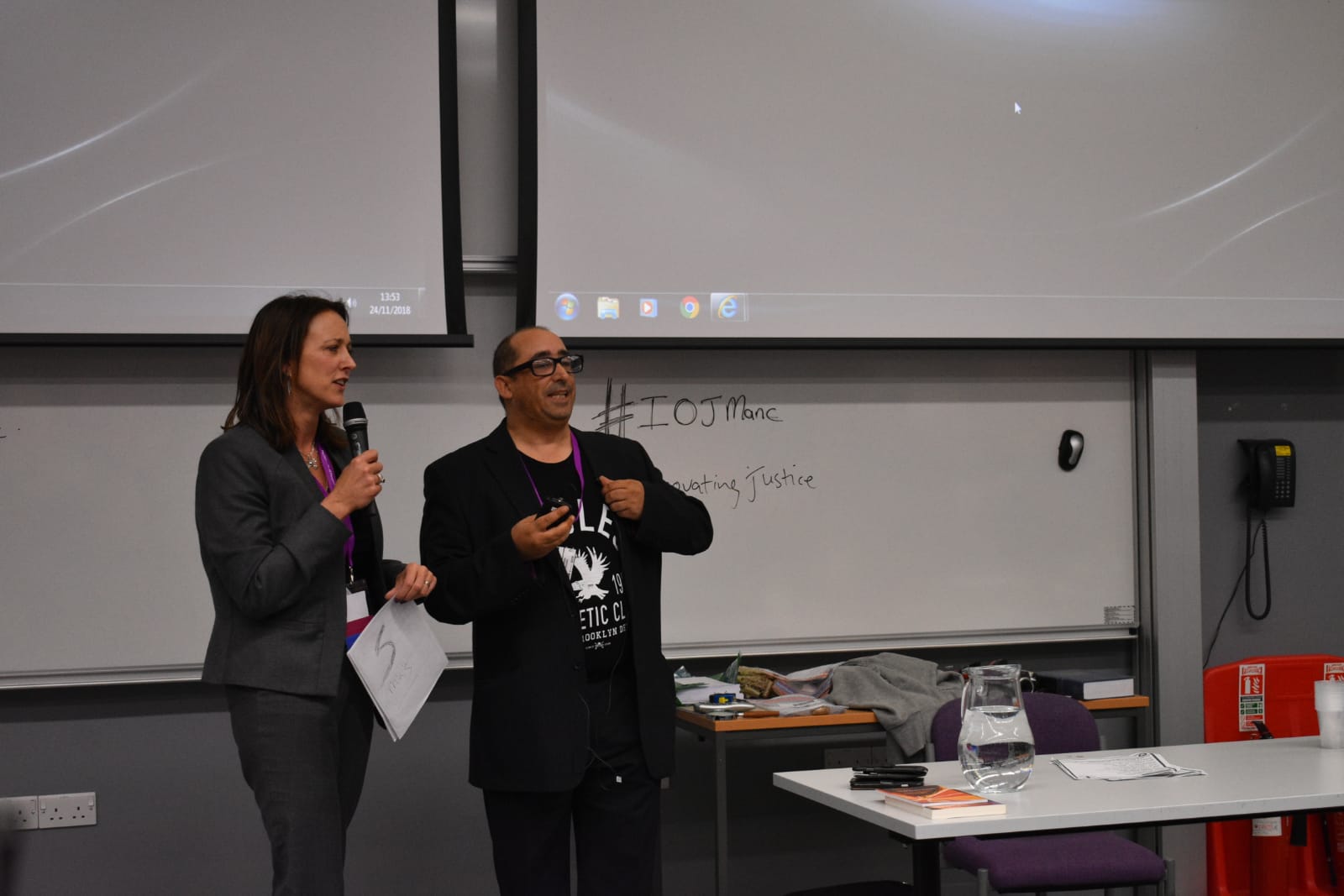 Michael O’Brien of the Cardiff Three – with Prof Claire McGourlay

Take Glyn Maddocks too. This veteran criminal appeals solicitor has very recently been on the receiving end of the CCRC’s unjustifiable and disgraceful decision not to refer a ‘classic’ miscarriage of justice case to the Court of Appeal.  Glyn has been part of the eminent team fighting for about 24 years on this case. Yet deaf CCRC ears take no heed of obvious police mistakes that must surely make that conviction unsafe.

Take Tony Stock’s legal team, who are still fighting after the Court of Appeal has four times refused to do the honourable and honest thing and admit that this cannot in any sense of the word be considered a safe conviction.

Take JENGbA (Joint Enterprise Not Guilty by Association). They thought they had ‘won’ in 2016 when the Supreme Court recognised in the case of Jogee that the law had many years ago taken a wrong turning. Yet still they see the Court of Appeal disagree that ‘substantial injustice’ has been caused to people like Laura Mitchell.

Take, too, the Centre for Criminal Appeals (CCA). That not-for-profit, campaigning for reform, law firm has just launched its ‘Show Us The Evidence’ campaign. In the best justice system in the world, do we really need a campaign calling for the right to see what evidence was used to convict people? REALLY? The answer is – YES, we do need this campaign. We currently don’t have that right.  Joe Public probably doesn’t know that.

So, please don’t blame us for being naturally pessimistic that things will change – we have good reason to be cynical. But we old-timers can’t resist a bit of hope, especially when it is accompanied by youth, a fresh outlook and a personal experience that has resulted in a media love-fest.

Liam (and Annie, and the IoJ team) – thank you very much. There is a lot of renewed hope on your young shoulders, and we want to do what we can to support you.

If you are willing and able to financially support Liam Allan’s Innovation of Justice conferences, please consider donating (here).

There will be more articles on sessions from the Manchester Innovation of Justice Conference over coming weeks.