‘They want us to imprison and deport ourselves’

‘They want us to imprison and deport ourselves’ 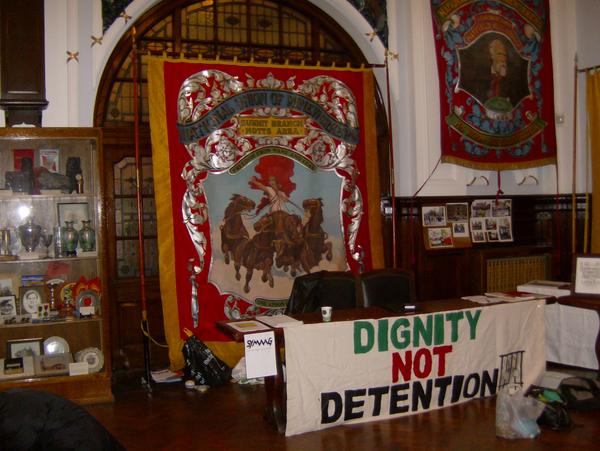 This piece was written Stuart Crosthwaite for #Unlocked15. Stuart is the Secretary of the South Yorkshire Migration and Asylum Action Group (SYMAAG).

The first event we in the South Yorkshire Migration and Asylum Action Group (SYMAAG) organised was in 2007: a three-day, 30 mile march from the Home Office in Sheffield to Lindholme Immigration Removal Centre near Doncaster to protest against detention. Lindholme is now closed, the Home Office building has moved, but we are still here.

The Home Office South Yorkshire asylum reporting centre is now at Vulcan House in Sheffield, on the banks of the River Don. Except for temporary holding cells beneath Vulcan House there is no immigration detention centre in South Yorkshire. The nearest is Morton Hall in Lincolnshire. For people seeking asylum who are obliged to report to Vulcan House each visit carries with it the threat that they will be detained. And the Home Office are keen to reinforce this fear. ‘I’m always sick… the week before I go to sign’, Pride from Cameroon explained. Mohammed from Sudan couldn’t sleep the night before his reporting day at Vulcan House and he packs all his immigration case papers in a rucksack each time he has to go to report. 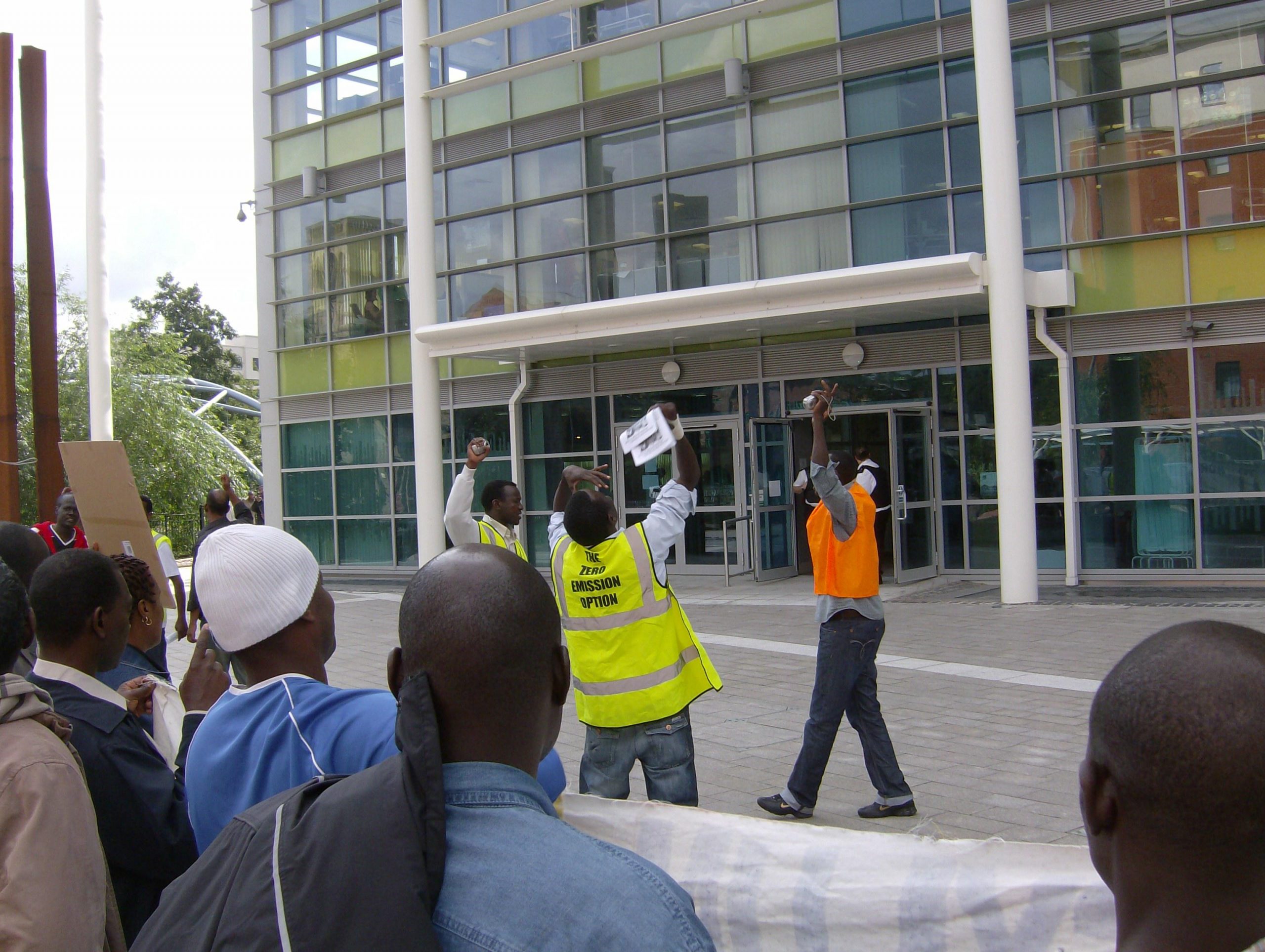 August 2008: South Yorkshire Sudanese community demonstrating outside Vulcan Hose for the right to work and to be
treated respectfully. We soon discovered the newly built glass and steel Home Office HQ and surroundings had excellent acoustics.

Don’t interfere
A condition for receiving asylum support is to report at Vulcan House weekly, monthly or every few months. Some people arrange for friends or supporters to accompany them when they report, feeling this provides them with more security or, if detained, an immediate campaign for their release.

In the last year, Home Office staff have sometimes tried to deny people the right to be accompanied. A retired teacher from Barnsley, who is an experienced volunteer, witnessed this when he accompanied a South Asian family on a recent visit to Vulcan House: ‘As soon as I entered the building I was shouted at to identify myself. One of the staff spoke to me as if I was a child: “If you’re not their lawyer what are you doing here? Get over there out of the way and don’t interfere.”’

The Home Office policy to create a ‘hostile environment’ for ‘illegal’ migrants is being put into practice at Vulcan House. Officials have handed out compulsory questionnaires (in English) to asylum seekers, demanding comprehensive personal and family information from whoever goes to sign. Questions range from data-trawling – personal details of everyone who lives in the same house as the person reporting – to the apparently casual ‘how do you spend your time each day?’ designed to question voluntary activities. Then there’s the question ‘what are your hopes for the future’? Apparently innocent, but in the hands of the Home Office, a tool for entrapment. The question appears designed to push people into the ‘Voluntary’ Assisted Return and Reintegration Programme (VARRP) if anyone gives the (understandable) response of ‘I hope to see my family/country/home again’.

Going home to Rotherham
The VARRP ‘Choices’ scheme has been heavily pushed by the Home Office at Vulcan House. Perhaps they’re in training for 2016 when the ‘Assisted Voluntary Return’ programme will be run directly by the Home Office. As people report at Vulcan House, they are bombarded with ‘Choices’ promotional material with pictures of smiling refugees who have ‘chosen’ to go back to the countries they fled from.

Staff have clearly been instructed to push the scheme aggressively, even rudely, sometimes with unexpected results. I overheard this exchange between Grace, an exiled political activist from Malawi and a member of Vulcan House staff. Grace is a destitute asylum seeker who has to walk miles each time she reports to Vulcan House.

When Grace explained that the bus to Rotherham costs £2.20 the nature of the misunderstanding became clear. She walked back home.

Prepare, Protect, Prevent, Pursue
Representatives from various Sheffield asylum rights charities sought a meeting with the Home Office staff at Vulcan House to talk about the intrusive questionnaires, the rude and aggressive selling of the ‘Choices’ scheme and the right to be accompanied when reporting at Vulcan House.

At the meeting in February 2015, hosted by the local MP Paul Blomfield, whose Sheffield constituency includes Vulcan House, the representatives were surprised to find that the Home Office had sent along the head of Immigration Reporting Centres for the Yorkshire and the North East region.

The charities raised their concerns. The senior officer from the Home Office was apparently in no mood to apologise for her staff or give any ground to ‘you voluntary organisations’. Instead, she brusquely handed out copies of The Dial (below) which seeks to criminalise and persecute people seeking safety in the UK. 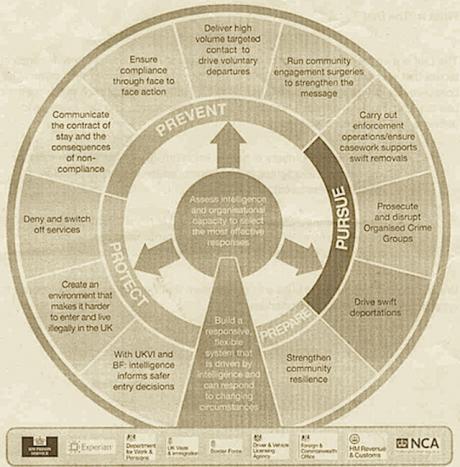 Then she read out a lecture about her exercise of powers under the new Immigration Act 2014, which includes checking on addresses and landlords who house illegal immigrants, and hinted that anyone (not just landlords) giving assistance to ‘illegal immigrants’ in the future might find themselves subject to the law. She also threatened charities’ representatives with the prospect of an order, ‘at present on the Minister’s desk waiting to be signed off’ banning volunteer escorts from all Reporting Centres.

Playing a game to scare us
Vulcan House has also been the chosen location for the organised interrogation of 26 Sudanese asylum seekers by Sudanese Embassy officials, described as ‘re-documentation interviews’ in 2011.

In testimonies from those people subjected to this possibly illegal and clearly intimidatory practice there were reports of threats to the asylum seekers’ families in Sudan and attempted bribery. ‘The Border Agency are playing a game to scare us’ was one man’s assessment of the process. A report titled with this statement was compiled following the interrogation and was presented to the Home Office.

Despite repeated questioning of the procedure by SYMAAG and Waging Peace the (then) UKBA response was vague and evasive. A response to our report on this incident in the August 2015 Sudan Country Information Guidance (see 4.1.4) blithely states that attendance at the interviews was ‘purely voluntary’. What would you do if you feared renewed torture in Sudan and received a Home Office letter stating in bold that ‘Failure to do so [attend the interview] may affect any outstanding claim you may have with the Home Office’?

Opposition to these interviews sparked the formation of support networks within Sudanese communities in the UK and the collaboration with campaigners. In 2012, pressure put on the (then) UKBA at Vulcan House resulted in a commitment from them to ensure all staff wore clearly identifiable ID numbers, after complaints of rudeness and bad treatment were made.

When introducing this new form of identification, the UKBA specified that it would also enable particular members of staff to be congratulated on their ‘good practice’. While it’s not clear how many official compliments have been received by Vulcan House staff members from people forced to report there, asylum seekers are quick (and generous) to point out that some workers there are respectful and efficient.

Soft detention
The baffling changes in reporting regulations and the general regime at Vulcan House suggest that many measures are the knee-jerk responses of Vulcan House officials to higher management and ministerial pressure to ‘get tough’ and ‘get results’. For example, the questionnaires mentioned above were heavily pushed to people reporting at Vulcan House for a few months with repeated warnings that it was compulsory to complete them. After a few months these badly photocopied grey sheets were forgotten and were never been mentioned again. The Home Office at Vulcan House appear to lurch from one fear-inducing scheme to another but with the clear intention of making life hard for people who can’t return home because of the threat of war and persecution.

Capita: Please detain and deport yourself from the UK and save us the trouble and expense?

The Immigration Act 2014 attempts to turn landlords, bank workers and health workers into informers and border guards. The Dial strategy seeks to smear people seeking asylum as somehow linked to ‘organised crime’, thereby enlisting state and private security forces to spy and enforce when required. State and private data-holding/collecting bodies like the DWP and Experian invisibly back up the effort.

Capita were paid to send texts direct to people’s mobile phones, telling them: ‘You are required to leave the UK as you no longer have right to remain.’ Despite it being a fiasco – many people texted were UK residents, an immigration lawyer in one case – Capita are now paid more public money to tag asylum seekers who have committed no crime. G4S which owns many housing facilities that host asylum seekers, also runs detention centres, transport and even asylum advice services – a kind of monitoring and enforcement one-stop-shop. There are signs displayed in the G4S asylum houses in Sheffield issuing curfews, telling the tenants they must stay in the house overnight. ‘Soft detention‘ as John Grayson calls it.

This summer I demonstrated alongside many other people against Yarl’s Wood detention centre, despite its physical remoteness. It was a visceral experience, hearing and seeing the women’s resistance, watching the perimeter fence pulled, rocked, then torn down as the police looked on awkwardly. Later, we learned that Serco, the company that runs the centre, had tried, pathetically and unsuccessfully, to distract the women with a game of bingo with ‘cash prizes’ while we demonstrated. It was a public relations disaster for Serco and the Home Office and both demonstrators and detainees were emboldened. I’m not suggesting that brick walls, bingo and security guard style immigration detention have come to an end. Instead, I believe that detention will be increasingly augmented with means of surveillance, confinement and coercion that are harder to locate, identify and therefore challenge. As an Iraqi Kurdish refugee in Sheffield astutely said: ‘They want us to imprison and deport ourselves’.