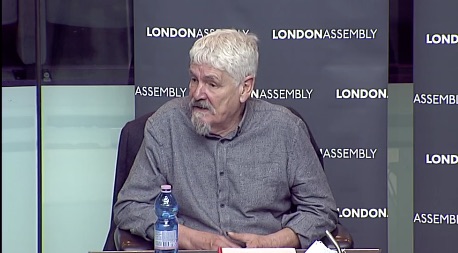 The brother of Daniel Morgan has accused Metropolitan police commissioner Cressida Dick of putting ‘every possible obstacle’ in the path of progress into the investigation of the 1987 murder and called for her to resign.

Alastair Morgan was speaking in the aftermath of the long-awaited report into the unsolved murder of his brother, private detective Daniel Morgan before the Police and Crime Committee at the London Assembly and called for the resignation of Dick. The Metropolitan Police was accused last month of ‘institutional corruption’ over its 34 year cover-up of the murder of private investigator Daniel Morgan in the report of the independent panel which was set up by set up by Theresa May as home secretary in 2013. The panel report revealed the Met’s seven year refusal to allow access to its own Holmes database. The panel chair Baroness Nuala O’Loan said the force’s primary objective had been to ‘protect itself’ for its own failings. You can read coverage on the Justice Gap here.

Despite multiple investigations and a collapsed trial, no-one has been brought to justice over the father-of-two’s murder, with a 2021 independent review finding that the Met Police had concealed or denied failings in the case. ‘We’ve been through five investigations, one of which lasted six years, and one which I have latterly been told was not actually an investigation into my brother’s murder,’ Alastair Morgan told the committee. ‘We’ve also been through an inquest, a two-year High Court disclosure battle, the longest pre-trial hearing in British criminal history lasting nearly two years before the collapse of the last prosecution, and then on top of that, we’ve had this eight-year inquiry. The only way I can describe all of this is to say that the Met has colonised my life for the last three-and-a-half decades.’

Alastair Morgan revealed that he had received a ‘short letter’ from Cressida Dick to apologise and that it did not include any acknowledgement of ‘her own involvement in delaying and obstructing’ matters. As well as delays to the panel report, Morgan holds Dick responsible for a ‘shoddy “cut and paste”’ report into the case delivered some 15 months after the collapse of the trial in 2011. ‘My job isn’t finished,’ he said. ‘It’s pretty obvious that there is corruption, those cases happen on a regular basis, though I think they just pluck the low-hanging fruit.’

Morgan identified three commissioners – Peter Imbert, John Stevens and Cressida Dick – as being ‘reprehensible in their behaviour’. Recalling his first meeting with former Deputy Assistant Commissioner Roy Clark in 1997, Morgan added: ‘I wanted such pressure to be put on them so they couldn’t wriggle around, or duck and dive, or lie anymore.’

He went on to claim he had been ‘grossly misled’ and subsequently discovered his concerns had been dismissed by Clark as paranoia in private correspondence as revealed in the panel report. ‘I don’t cry easily, but I felt like sitting down on the sofa and bursting into tears,’ Morgan told the committee. Tthat Clark later became a director of investigations at the Independent Police Complaints Commission, Morgan said, ‘exemplified the kind of institutionalised police corruption’ that he had personally experienced.

Asked what the Met’s priorities should be following the publication of the independent report, Alastair Morgan said: ‘Deep, deep cultural change. Nothing less than that would be worthy for this country. A duty of candour, above all, would be the most relevant to me.’

He spoke about the emotional toll of the family’s fight for justice and, in particular, the impact on his mother who died three years ago. ‘It was an open wound for her, even on her death bed. It’s part of the psychological brutality inflicted on people in my position.’ Even though the murder took place more than three decades ago, he told the committee he continued to feel a fear of reprisals. He also said he had received telephone death threats. ‘Thinking about what happened to my brother, and the people behind it, it scared me. I can remember going with my disabled partner down to her car, every morning, feeling like I had to escort her – to the extent of looking under the car for bombs.’

Daniel Morgan: Met accused of ‘institutional corruption’…
Episode 13: 'I no longer trust Britain'
'A kick in the teeth': fury as Priti Patel insists on…
Priti Patel told to publish Daniel Morgan report or else…
Cressida Dick’s downfall demonstrates the need for a new…