The Justice Gap goes to Hackney

The Justice Gap goes to Hackney

The initiative is aimed at young people to help explain their legal rights and demystify the law. We are presently working on a dedicated website about the law and justice drawing directly on the experience of young people in schools and colleges in the borough.

On Monday 11th March 2013, as part of the project’s objectives to ensure that the guide will be fully informed by the views of young people from Hackney, the project made its second visit to a local Hackney school. We visited Hackney Community College to host a special tutorial session for 40 ‘A’ Level students. We had previously visited Mossbourne Academy –  see HERE.

Students were shown a series of slides with questions about legal topics and were asked to vote – using the clickers- for what they thought was the correct answer.

Over half of the HCC students correctly answered the question ‘If my friend commits a crime while I am there, can I be convicted of the same crime?’; by clicking answer ‘C’, which stated ‘Yes – if I encourage it or help her not to get caught‘. 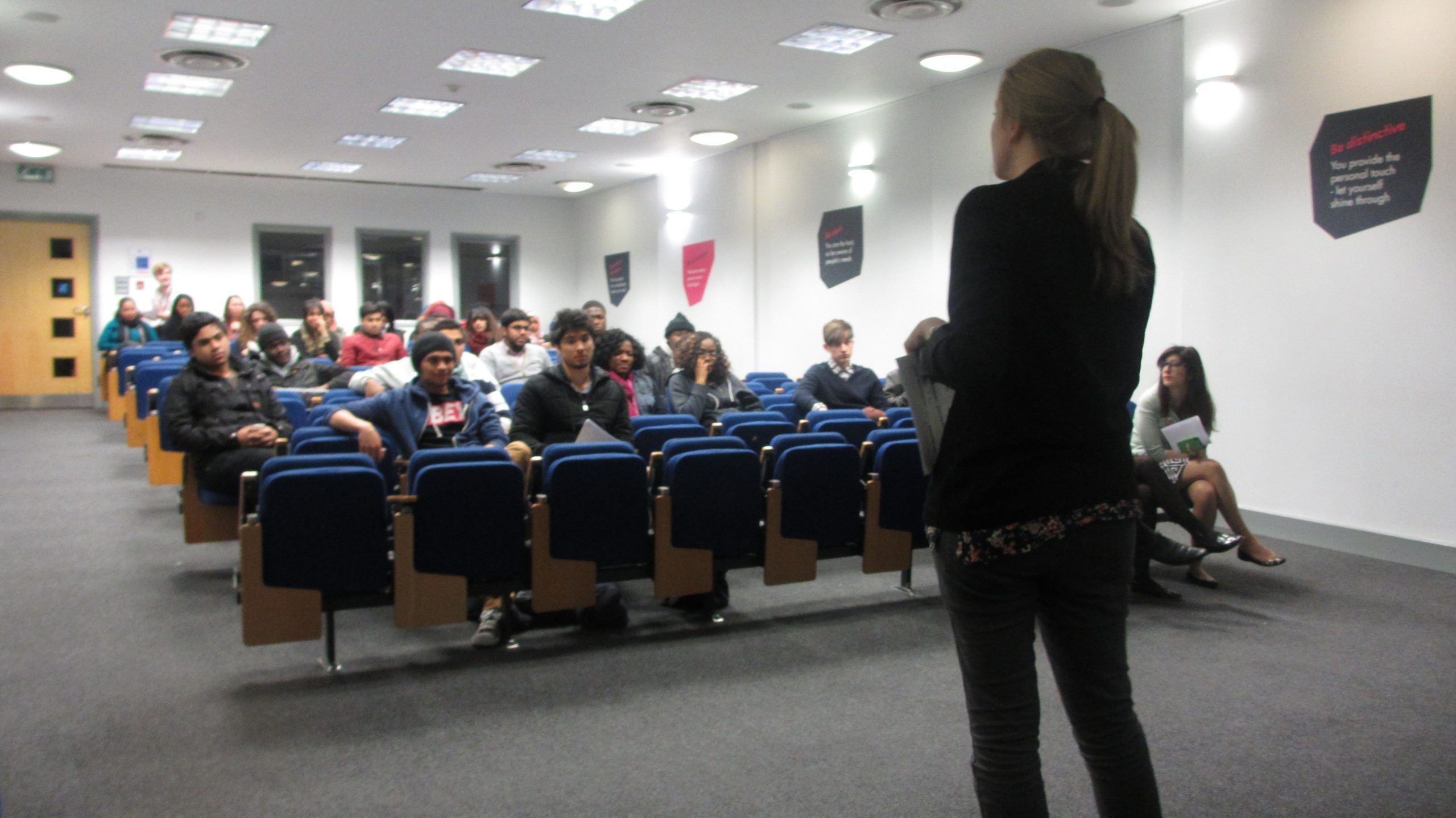 Jennie (pictured above) then explained the legal terms for that ‘encouragement’ with the students: ‘aiding and abetting‘ and ‘joint enterprise’. Most students (92%) were surprised to discover that borrowing something without asking is not theft if there is ‘no intention to deprive’.

More than two thirds (67%) of students thought that ‘being a lawyer is ‘the kind of job that can ‘make a difference’ and nearly all students (94%) believed that ‘everyone should have free access to legal advice’. One third of the students said they would consider becoming a lawyer.

The students were then given two scenarios, each raising a difficult moral dilemma.  The students were split into two groups – playing lawyers for the claimant and respondent, respectively.  In the first exercise, half the group were asked to argue in favour of newspapers having the right to photograph a famous person drunk in a private garden; the other half had to argue against the alleged invasion of privacy. The second exercise looked at an adoption court case where a biological mother, who had signed a pre-birth contract agreeing to adopt her child, changed her mind after the child’s birth.  Half of the students played lawyers for the biological mother and came up with legal arguments about her right to keep the baby.  The other half of the students played lawyers for the prospective adoptive parents, who were arguing that the biological mother had breached the legal contract she had made with them, by changing her mind about the adoption.

There was then ‘Stop and Search’ sketch – run by Deji Adeoshun of the Hackney Council of Voluntary Services (pictured above, with two students from HCC, playing an aggressive police officer). Deji explained the HCC students’ rights under ‘Stop and Search’.  It proved so popular that many of the students rushed to speak to Deji afterwards to ask about how they could get involved in HCVS’ special stop and search monitoring group, which monitors police use of stop and search procedure in Hackney.

UCL’s barristers in the making, Anthea Brookes and Sam Frank, then acted out the role of defence and prosecution barrister, respectively, in a mock criminal trial.  Like the Mossbourne Academy pupils who had watched the same mock trial, the HCC students, who acted as the judge in the case, decided to grant Anthea’s client bail.

We are grateful to Fayola Massiah, Hackney Community College’s senior tutor for the Sixth Form Department, (pictured below left) for arranging the HCC session, and to Sullimen Peerbacos, curriculum manager of English and Humanities (right) for supporting the HCC session. 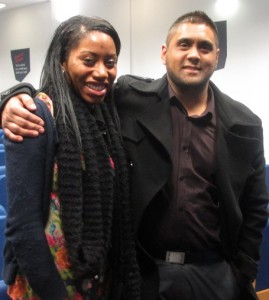 Thanks also to the Mind the Justice Gap Project’s participating UCL students for masterminding the clickers session and mock bail trial:

Please find the full results of the HCC clickers’ exercise, setting out the HCC students’ views and opinions on the law HERE.

Hackney Council to pay £26,000 for failing to secure…
Police presence in schools harms students and 'exacerbates…
'Making do with sticking plasters when we need…
Black schoolgirl subjected to 'traumatic' strip search as a…
Concerns over suicides of unaccompanied asylum-seeking…