Victor Nealon - for the Independent on Sunday

We have in the last few years become fixated in our criminal justice system on the plight of victims and the failure to protect and support them. There are good reasons for that. We are all aware of circumstances where genuine victims have been denied justice due to failings in the investigation.

Yet there is one class of victims that have been consistently ignored by our government, their suffering is perhaps unrivalled. Many suffer not only just for years but decades. They will never recover from what they have had to endure.

Those are the victims of a wrongful miscarriage of justice. They are the forgotten victims in our society. They are an embarrassment to the system and the stain of a wrongful conviction is never really removed from them.

The reality for them is they will invariably never return to the life they had before they were imprisoned: family members die whilst they are in custody and when they do finally ‘come home’ it will often be to a place they no longer recognise. They invariably suffering mental health consequences – as has been well documented.

They never recover fully. Sally Clark, Stefan Kiszko and Sean Hodgson all died shortly after they were released

There are three main points we need to focus on here: firstly – and of paramount importance – there is a need for recognition by the state that this should not have happened; an award of compensation; and, finally but significantly, a package of support to help an individual who has often been in prison for a large part of their lives and finds themselves in a world they do not recognise .

Readers might assume that they would already receive this from the state. Sadly, they would be mistaken.

Test case
The Court of Appeal previously rejected a test case by two innocent victims of miscarriages of justice challenging the government over its refusal to compensate them for years spent in prison. Victor Nealon and Sam Hallam had been challenging provisions under the Antisocial Behaviour, Crime and Policing Act 2014 which restricts compensation pay outs for victims of miscarriages of justice to only those who can demonstrate ‘beyond reasonable doubt’ that they did not commit the offence as a result of a newly discovered fact .

Both men had their convictions quashed with the effect that in law that they are innocent – and yet the 2014 law requires them, for the purposes of compensation, to prove their innocence again. The person who decides whether they have done this is the secretary of state who has an interest in refusing all such claims, no wonder the law reform group JUSTICE recently called for an independent process.

Back to the new post 2014 test; as now formulated (and sanctioned by the Court of Appeal), it requires a claimant to prove their innocence for a second time – and that assessment, it appears, is entirely at the discretion of the secretary of state.

The history of the requirement to have a scheme for compensation derives from the UK’s international obligations under International Covenant on Civil and Political Rights 1966, article 14 (6), ratified by the government in 1976. This states that:

When a person has by a final decision been convicted of a criminal offence and when subsequently his conviction has been reversed or he has been pardoned on the ground that a new or newly discovered fact shows conclusively that there has been a miscarriage of justice, the person who has suffered punishment as a result of such conviction shall be compensated according to law, unless it is proved that the non-disclosure of the known fact in time is wholly or partly attributed to him.

Because of a lack of statutory definition of a ‘miscarriage of justice’, a series of cases ensued the culmination of which was R (Adams) v Secretary of State for Justice [ 2012] 1 AC 48. In this case only two types of cases were envisaged as being miscarriages of justice:

Parliament suggested – following Ali and Others in 2013 – that this created uncertainty and imposed the 1ZA Section 133 statutory test.  An essential argument in the cases which have subsequently been brought is that the new Section 133 is incompatible with the European Convention on Human Rights, Article 6(2) (the presumption of innocence).

The Supreme Court in R (Adams) v Secretary of State for Justice in 2011 held that a ‘miscarriage of justice’ should cover those cases where a new or newly discovered fact ‘so undermines the evidence against the defendant that no conviction could possibly be based upon it’. Much has been made of the differing speeches in that case and whether ‘a minority of the majority or majority of the minority’ (depending on your view) reached any conclusion over the applicability of Article 6(2).

The Grand Chamber in Strasbourg appeared to reach a contrary view in the case of Allen v United Kingdom [ 2013] 36 BHRC 1, although due to the wording of the test at that time it declined to make any award of compensation to Ms Allen. This presented the Court of Appeal with a conflict between an interpretation that Section 133 does not offend Article 6(2) and the decision in Allen which suggests that it could and arguably would in its current formulation.

The Court now concludes (at para 21 of its judgment) that following Adams article 6(2) does not apply to Section 133 and that Adams does remain binding authority regardless of Allen.

However, contrary to the Government’s arguments, whilst the Court of Appeal considered the decision in Adams was binding authority it concluded that the decision in Allen was a very clear statement by the Grand Chamber that article 6(2) did apply.

As the Court observed, it was a carefully considered decision which was intended to be authoritative. As a result, the Government’s attempts to discount the decision in Allen based on some idea of a lack of clear and constant line of authority were dismissed by the Court of Appeal.

As a result, the only argument for the Court to then address was whether section 133 as now amended was incompatible with Article 6(2) which clearly applies. The Court concluded that, if the language of the decision-maker is such as to call into question the innocence of the claimant, then this will infringe article 6(2).

I accept that, if section 133 required the secretary of state to voice doubts or suspicion on the innocence of the applicant, then it would be regarded as incompatible with article 6(2) according to the Strasbourg jurisprudence.
Para 47

With respect to his Lordship this is exactly what the situation is.

For example, in the case of Victor Nealon, the secretary of state is stuck with accepting the consequences of the DNA pointing to someone else being responsible for the offence and – to seek to avoid this conclusion – the Secretary of State has been left to raise the issue of scientific proof (i.e., saying that whilst he accepts the DNA was someone else that does not amount to scientific proof). In his rejection, the minister relies on other prejudicial factors in declining an award .

He is casting doubt on the applicant’s innocence and he does it in general terms. The claimants are being required to prove their innocence generally.

The Court seeks to lend support to its conclusion by pointing to the fact that the purpose of such a scheme is to limit eligibility to a narrower category of cases, the difficulty however is that the test as it now stands will reduce claims to the point of vanishing.

In that regard it is worth noting statistics from JUSTICE following a Freedom of information which show a drop from 10 in 2011/12 to only five successful applications in the last five year and last year nothing was paid out – as reported on the Justice Gap here. Payment of compensation has effectively been stopped. 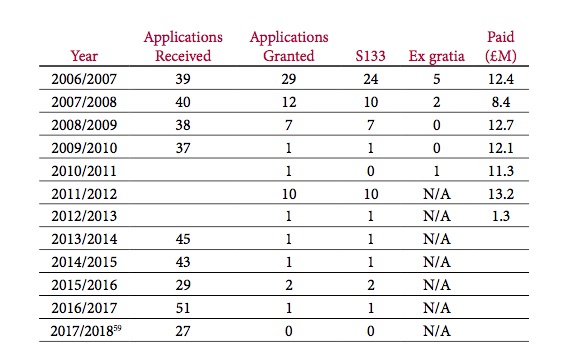 The applicants say the European law is so clear and that a ‘clear innocence’ test is incompatible.

JUSTICE have been given permission to intervene by the Court. The group’s new ‘Supporting Exonerees’ report highlights the problems with the new regime.

It is not the first time JUSTICE has called for action. They did so back in 1982 and, as they say, little has changed in 40 years.

‘I was a hell of a lot happier in prison than when I got out,’ Paddy Hill told the group. Those released get little or patchy support. Whilst there is a Miscarriage of Justice Support unit it is London-focused, has few resources and does not offer psychological support.

Further there is simply no adequate system for recognising miscarriage of justice and putting the failures of the system right.

The problems here start at the doorstep of the Court of Appeal. The court almost always expresses its judgment in terms of safety only and not innocence. The court needs to be more forthcoming in its language and where a miscarriage has occurred it should say so.

The system isn’t maintained by placing a sticking plaster over every crack, it is maintained by recognising and acting on failure. The court needs to acknowledge miscarriages of justice for what they are and ensure that they don’t occur in the future .

What next?
So, Sam Hallam, Victor Nealon and others now await the hearing of the Supreme Court which starts Tuesday next week and hope finally a court will recognise that they should not be asked to prove their innocence a second time.

No one wants to see a conviction overturned on technical grounds compensated. Victor Nealon had his conviction quashed, after 17 years of hell, following a DNA test indicating another perpetrator. Likewise, Sam Hallam is clearly an innocent man. More than 14 people at the crowded murder scene including the intended victim later told Thames Valley police that he was not there.

How would we expect to be treated if we were wrongfully convicted? We certainly wouldn’t expect to have to prove our innocence a second time.

If you still need persuasion, then the next time you go to sleep close your eyes for a minute and imagine waking up in the same cell for 17 years each day screaming your innocence. Is it really too much to ask to be helped after such an ordeal?

This article was first published on May 4, 2018