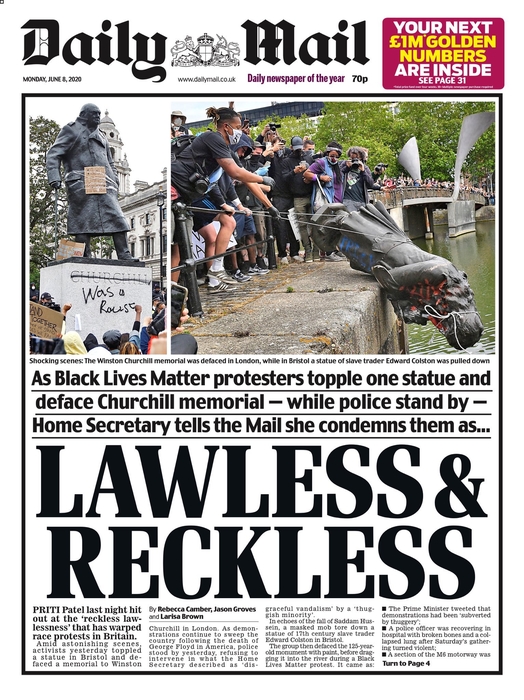 Trial by jury plays a ‘significant historical place in our legal traditions, and…in securing the fairness of certain trials’. This was the attitude of the government just before Christmas in its much vaunted Human Rights consultation. Britain’s history of protecting the jury trial, traced back to Magna Carta and the Bill of Rights 1689, was proudly held up in it as an example of British justice. The government was even hopeful that ‘there may be scope to recognise the trial by jury in the Bill of Rights…’.

Given that this was a particularly pointless addendum to the consultation document – no one thinks trial by jury is under any sort of threat – this may be something the government now regrets, as it sends ministers out to condemn the verdict of the jury in the trial of the Colston Four. Robert Jenrick, now removed from Cabinet, but not an MP unwilling to brownnose the government, was quick off the mark, claiming on twitter that ‘we undermine the rule of law…if we accept vandalism and criminal damage are acceptable forms of political protest…’. Grant Shapps, the Transport Secretary, echoed him on Thursday morning, telling Times Radio that ‘we’re not in a country where destroying public property can ever be acceptable’.

Unfortunately for Shapps and Jenrick, they are wrong on both counts. We are a country where destroying public property can be acceptable- or at least not criminal. And it is because of this that we are a country that upholds the rule of law. This may be, as some commentators have claimed, the elevation of ‘values’ over ‘law’, but that is to forget what the criminal law really is. Criminal law is nothing more than the identification of behaviours which are incompatible with society’s values and principles, elevated to legal status. The prohibition of such behaviours is then enforced through a jury – serving as society’s representatives – making a decision on whether those values have been breached in a criminal way.

In the case of the Colston Four, this is exactly what happened. Rhian Graham, Milo Ponsford, Jake Skuse and Sage Willougby were charged with criminal damage for their role in the toppling of Edward Colston’s statue last summer. The Crown gave its case for their conviction to the jury. In response, the defendants’ barristers, including Liam Walker, who launched a stirring exhortation for the jury to put themselves on the ‘right side of history’ in his closing argument, put forward a legitimate defence in law. Having heard both sides, it was the defendants who the jury fell in behind.

Perhaps the government – and those who consider the verdict an assault on the rule of law – would have preferred the trial judge to take the same approach as his 17th century counterpart in Bushel’s Case. There, two Quakers were accused of violating the Conventicle Act, which forbade religious gatherings of more than five people without the consent of the Church of England. The jury refused to convict them, concluding that they were guilty of speaking in the street, but that it was not to an unlawful assembly. In response, the recorder, presiding over the case, withheld their dismissal, requiring them to hand down a verdict that the court will accept, depriving them of ‘meat, drink, fire and tobacco’ detaining them for two days, after which they continued to return a not guilty verdict. Unrepentant, the judge still persecuted the jury, fining them for contempt of court. It took the Court of Common Pleas to correct this, with Sir John Vaughan overturning the fine, ruling that juries could not be punished for the verdicts they returned.

Bushel’s Case was foundational in establishing the right of a jury to reach a verdict without fear of punishment. Crucially, it also accentuated the fact that juries are free to reach a decision not only according to law, but according to their conscience. This is something that juries have done again and again, particularly in support of political movements. In 1649, a jury acquitted John Lilburne, a leader of the Leveller political movement during the English Civil War, who was – not unjustifiably – accused of high treason for trying to foment rebellion against Oliver Cromwell’s protectorship. More recently, as Harood Siddique has written in The Guardian, juries have acquitted Extinction Rebellion protesters for criminal damage to Shell headquarters in London, Greenpeace activists for criminal damage to Kingsnorth power station, and anti-war campaigners for conspiracy to cause criminal damage to US bombers at RAF Fairford.

There is no problem with disagreeing with a jury’s verdict. As I wrote at the time Colston’s statue fell, the setting of a precedent (albeit not a legal one) that permits campaigners and activists to desecrate or topple statues or landmarks that they morally disagree with may set an alarming chain of events in motion. Much of ‘liberal’ society is intolerant of any views that deviate from the approved groupthink, as the Boswell’s School have shown in stripping a school house of JK Rowling’s name, and is ever more prone to judging historical figures by the standards of today. Such an attitude means that there are few figures cast in bronze that rest secure on their pedestals. But to suggest that the verdict is somehow a strike against the rule of law, or is incompatible with British values shows an impressively poor grasp of British history, British values, and British law.

The Colston Four had a strong case. Not only were they able to argue that they held the moral high ground – supporters of Colston had long blocked legitimate attempts to pull him down to earth – but they had a good legal case too. To be convicted of criminal damage, you have to damage property without a lawful excuse- with the belief that people entitled to consent to the damage would accept such an excuse. Edward Colston’s statue stood upon public land, and since its erection has been decried by Bristolians as a stain upon the city, a celebration of slavery and xenophobia in a city famed for its diversity and tolerance. It does not take much to suggest that the people of Bristol wanted the statue gone- by hook or by crook.

Critics of the decision can bemoan the actions of the protesters. They can call for dialogue and discussion, not direct action. They can criticise the conclusions of the jury. But they cannot say the jury’s decision did anything but show that while Britain’s government may have entirely forgotten what British values are, the British people have not.