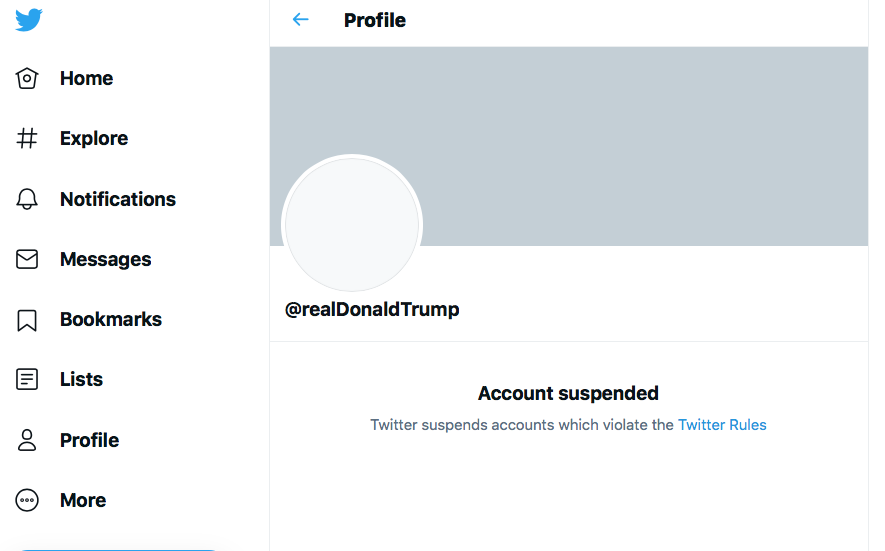 The leader of the free world is not in need of a mouthpiece. Any utterance the President of the United States desires can be sent out to millions of people across America and to billions around the world. A presidential address from the White House podium interrupts scheduled broadcasts at a moment’s notice, and almost any newspaper editor would be willing to put an op-ed from the President front and centre of the next day’s edition. Presidents do not struggle to inject their opinion into the public discourse.

Infamously, Donald Trump spent his presidency resiling from these traditional options, other than when he dialled in to his favoured sycophants on Fox News, until they too fell from favour. Instead, he has remained faithful to Twitter, the social media outlet that helped pave his path to the presidency. He turned to it to celebrate and to fulminate, to vent his tirades and to offer his bromides. For Twitter, this has been both a blessing and a curse.Trump is the most famous man on the planet, and his dependence on Twitter draws in the rest of the world, helping sustain their position in a fickle social media marketplace. Simultaneously, however, Twitter have had to rewrite their policies, carving out exemptions to allow Trump to bully and to threaten. Even as the President continued to dispute the result of 2020’s Presidential Election, stoking the resentment and ire of his base, Twitter refused to remove him from their platform. Instead, they tagged his tweets with an alert noting that his claims of election fraud were unsubstantiated.

This toleration abruptly ended last week when, amid chaotic scenes at the US Capitol, Trump refused to issue a categorical instruction to his supporters to stand down. Instead he praised their patriotism, told them he loved them, and endorsed their belief that the election was stolen, before half-heartedly suggesting they should ‘go home’.  As it turns out, an incumbent President inciting and then encouraging armed insurrection against the American legislature is beyond the pale even for Twitter, who promptly kicked Trump off the platform, first suspending his account, then banning it.

Twitter, Facebook, Instagram and other social media hegemons exist in a peculiar, novel category.  While they have effectively become a public service, with Facebook alone having almost three billion active users globally, they are an unaccountable one. Most are still governed by a single person, such as Mark Zuckerberg at Facebook or Jack Dorsey at Twitter, who can essentially dictate company policy. When Zuckerberg and Dorsey decided that Trump’s time was up on their platforms, that was it. He was peremptorily dispatched, exiled to the social media wilderness of Parler, the ‘free speech’ platform that has been a haven for other exiled alt-right figures, like Katie Hopkins and Alex Jones. (And even there, his time was fleeting, with Jeff Bezos’s Amazon withdrawing infrastructure support for the platform and Google and Apple removing the app from their app stores, essentially destroying Parler.)

For many of Trump’s critics, this ban was the right decision, albeit one made much too late.  Had Twitter intervened at the earliest opportunity, shutting down Trump’s account after he began promoting the racist ‘birther’ conspiracy about Obama not being an American citizen, it does not seem unreasonable to muse upon whether that would have been enough to check his ascent to- and assault upon- the American presidency. Even if they had intervened later, when Trump began attacking other levers of democracy like judges or opposing politicians, or when he promoted alt-right and far-right figures and conspiracies, this might have been enough to limit his power, checking the growth of his conspiracy-addled, nationalistic fanbase and saving America from its worst impulses. But even by intervening late in the day, they have possibly helped pull America back from the bring.  The removal of Trump has been followed by the expulsion of other alt-right accounts, quietening the more paranoid corners of mainstream social media.  This will inhibit the ability of these groups to organise en masse and stage another assault, perhaps at Biden’s inauguration in less than two weeks.  The true obsessives will doubtless remain, resurfacing elsewhere, but their ability to draw and convert new followers will be checked by condemning them to irrelevance in the outer reaches of the internet.

Others, reasonably, point to the fact that welcoming such interventions simply transfers our vulnerability. Even Angela Merkel, the German Chancellor – and no fan of Trump – has voiced her disquiet at the fact that a world leader can be so easily dispatched from a global communications service. Like a game of whack-a-mole, Twitter whacking Trump may have reduced the threat to democracy posed by QAnon-obsessed conspiracists, but Big Tech has in turn popped up as another threat in need of a whack. For instance, what if one of the founders of these giants wasn’t merely indifferent to democracy, as Mark Zuckerberg seems to be, but hostile to it? What if, instead of kicking Trump and his supporters off of the platform, they were elevating them, and suppressing supporters of democracy? Such a scenario is not particularly difficult to imagine.  Peter Thiel, the Trump-supporting venture capitalist and the first outside investor in Facebook, has said he no longer believes that ‘freedom and democracy are compatible’. What state would democracy be in if he had bought control of Facebook in 2004?

Globally, something must be done to respond to these corporations. It is no use trying to shoehorn them into pre-existing categories, as they don’t – and won’t – fit.  But as climate change has shown us, trying to unify the global community around a single objective is an almost futile ambition and, even when an agreement is reached, progress is agonisingly slow and almost impossible to enforce. This does not mean we shouldn’t try, but it does mean that something must step into place in the interim. Here, the courts – and judicial review in particular – may provide a useful sticking plaster.

Typically, the courts only judicially review decisions made by public bodies, whether on a large scale, like ministerial decisions over domestic policy,  or on a small scale, like a local authority deciding on a planning application.  At times, however, the private sphere bleeds into the public sphere. This most obviously takes place when public services are contracted out by a public body, such as when the government offers tenders for corporations to run prisons, or when it outsources healthcare.  Here, the relationship between the state and the private sector is clear.  On other occasions, the private sector, independent of the state, begins to fulfil a public, rather than private, function, and so should fall under the auspices of the courts’ judicial review powers.  Once decisions of corporations begin to affect the rights and liberties of individuals, like Big Tech does with free speech, they need to be held to a higher standard, a standard that holds their decisions to account and protects peoples’ rights.

With regards to Big Tech’s expulsion of Trump, some have tried to present this as Twitter adopting an editorial stance, coming closer to the publishing model, seeking to regulate them in that way. This inverts the nature of editorialisation, which usually comes before, not after, the fact.  A better analogy is with Hyde Park’s Speakers’ Corner.  There, the presumption is that anyone can speak. Much like Twitter, or Facebook, where anyone can open an account and launch their opinions into cyberspace, at Hyde Park Corner anyone can pull up a soapbox and give voice.  However, should the government, or the Royal Estates, seek to ban someone from speaking, they could rightly challenge the legality or rationality of the decision, holding the decision-maker to account. So the case should be with Big Tech firms like Twitter.

Much has been made of the fact that Twitter continues to allow the Ayatollah or Vladimir Putin, and innumerable other undesirables to tweet. Yet this confuses the nature of Twitter’s decision.   Twitter did not remove Donald Trump’s account because of an objection to his Administration’s policies, but because he had progressed from using Twitter to mete out abuse and disseminate propaganda to using it to foment civil insurrection. By any standard, Twitter taking his soapbox away from him was a legitimate and reasonable decision.  For them to strip a different global leader of their account may not necessarily be so.

Globalisation has blurred the public-private divide. Individual rights, such as to free speech, are now easily stripped away by corporate monoliths in Silicon Valley, and defenders of democratic values are right to be concerned by unaccountable nature of their power.  As governments prevaricate over how to respond to this threat, trying to thread the needle between their need for big tech’s financial investment and their need to protect fundamental rights, it is the courts that are best placed to step into the breach.

'Like a gambler who knows the game is up but is going to try…
'America may have just witnessed an attempted coup, but…
Venality clothed in ermine
Another battle in the culture wars
Keeping populism at bay