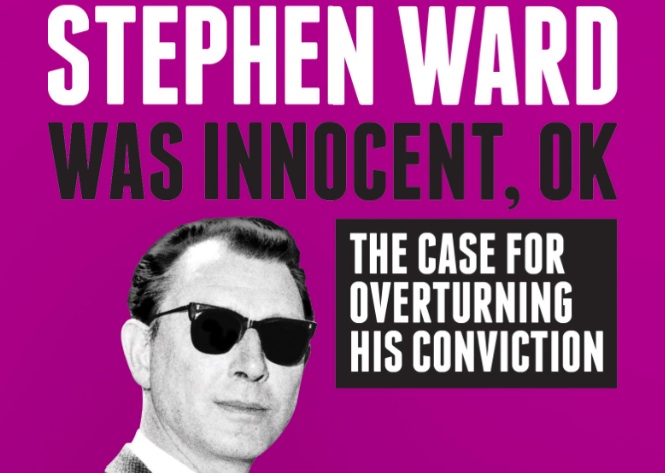 INTERVIEW WITH GEOFFREY ROBERTSON QC: ‘The conviction of Stephen Ward stands as the worst unrequited miscarriage of justice in modern British history and it is now time it was overturned,’ argues Geoffrey Robertson QC in what has been called ‘the most elegantly written application’ ever to have been sent to the Criminal Cases Review Commission.

If the CCRC isn’t persuaded by his book Stephen Ward Was Innocent, OK, then there is always the Andrew Lloyd-Webber musical currently at the Aldwych Theatre.

‘Teenagers of my generation got a lot of their sex education from reports of the Ward trial,’ the head of Doughty Street Chambers reckons. Robertson recalls reading Ludovic Kennedy’s The Trial of Stephen Ward before he was called to the Bar. ‘It was about the establishment’s revenge and the attempt to staunch what they saw as sexual corruption,’ he says.

Moral panic
‘Ward was put on trial at the time of moral panic, when the Christian complacency that had settled over British society after the war have been severely shaken by the Profumo affair,’ Robertson writes in the book’s preface.

John Profumo, the Minister for War in Harold Macmillan’s Conservative government had a brief affair with Christine Keeler and lied about it in Parliament. His subsequent confession ‘blew the lid off a pressure cooker of rumour and allegation hitherto pent up by Draconian English libel law’.

Keeler was rumoured to be having an affair with a Soviet diplomat. Many thought that ‘the moral fabric of family life’ was under threat from ‘this explosion of sexual scandal’ and Ward was society’s the scapegoat.

Robertson calls Ward ‘a British Dreyfus’- both men were ‘innocent victims of public prejudice and politically expedient prosecutions’ although, the QC notes, ‘at least Dreyfus involved a serious crime that had actually been committed (by someone else)’.

Stephen Ward was convicted on July 31st, 1963 at the Old Bailey on two counts alleging that he lived off the earnings of a prostitute. He was in a coma at the time, having tried to take his life the night before. He left a suicide note saying that ‘after Marshall’s [the judge’s] summing up, I have given up all hope’.

Stephen Ward died 50 years ago. Why should readers today care? ‘We still care about Dreyfus and we should care when at the Old Bailey, a High Court judge – together with the Chief Justice and the next Chief Justice – are all implicated in manipulating the law,’ Robertson says. ‘We should get to the bottom of how and why it went wrong – for Stephen Ward but also for Christine Keeler and Mandy Rice Davies who were both branded as prostitutes when they were not.’

‘For all the significance of the Profumo affair and the dubious nature of Stephen Ward’s trial, no lawyer has so far got their teeth into what went wrong,’ continues Robertson. One reason for this, according to the barrister, was ‘the absolute and unprincipled decision’ of the Chief Justice, Lord Parker to embargo the publication of the official transcript. ‘One of the most disgraceful things that has happened in British law,’ reckons the QC.

‘We say that justice must be seen to be done, and we pretend that is a fundamental aspect of British law but this is the only case where the transcript of an open trial has not been allowed to be published. No reason was given.’

Robertson flags up a book by Dr HV Evans about the Tolpuddle Martyrs which talked of ‘injustice within the law’ and how, at a time of moral panic, laws and legal procedure could be bent to produce an unjust result. ‘We really must always be aware – especially, since we put so much store by the rule of law- of cases where the law is manipulated to reach an unjust conclusion. This is a special class of case.’

Get Ward
Stephen Ward is ‘not your run-of-the-mill miscarriage of justice’ based upon the fallibility of eyewitness evidence, police corruption or defence incompetence.

‘This case is all about the law being manipulated under the pressure of a moral panic from the Home Secretary,’ Robertson says. It is his contention that it was the Home Secretary, Sir Henry Brooke who made a scapegoat of the society osteopath by ordering the head of MI5 and the police commissioner of Scotland Yard to ‘get Ward’ for any offence they could.

Ward was accused of living off the earnings of Keeler and Mandy Rice-Davies. The police went after their man with ‘extraordinary zeal’ – ‘never before or since’ have some 140 witnesses been interviewed in an attempt to drum evidence for ‘a suspected pimp’. Keeler was interviewed 24 times..

‘We still have to be careful where there are similar moral panics,’ he says. The human rights lawyer suggests that ‘we are perhaps overzealous in trying to make up for our failures to nail Savile’. ‘I’m not against prosecuting the historic sex abuse cases, telephone hacking or whatever but we have to learn the lessons of the Ward case where he was rushed to justice.’

Are we complacent? Do we think that the modern Court of Appeal could withstand the pressures of moral panic today? ‘I do think things have improved a great deal. After the Birmingham 6, the Guildford 4 and in particular Derek Bentley’s case, we are far more attuned,’ he says. But things do go wrong, the QC says; flagging up ‘the attempted courtroom crucifixion of the domestic goddess’ (and former girlfriend) Nigella Lawson.

‘My greatest worry is that we will have more miscarriages of justice as a result of the slashes to legal aid. The law will become open to all like the Ritz hotel if we continue in the direction that this government is going.’

Is it right that the CCRC’s already overstretched resources should be deployed on an historic case like Ward when it is struggling to keep up with the cases of prisoners alleging to be the victims of miscarriages? ‘Any civilised system of law has to revisit cases where there is compelling evidence of miscarriage,’ Robertson replies. ‘It won’t take very long.’

As he puts it, there are ‘no bodies to exhume’ though some (not him) ‘do take the view that Stephen Ward was murdered by MI5’.

‘Keeler was convicted of perjury subsequently,’ Robertson says. ‘In that case the prosecution said to members of the jury if there was anything wrong with her evidence there was a Court of Appeal to put it right. It virtually promised that the Court of Appeal would take it on.’

Another reason for revisiting the case is that it is the only way that the public will get to see the transcripts. He points out that the CCRC can use its powers under section 17 of the Criminal Appeal Act 1995 to disclose the transcript

The book includes a chapter detailing 12 grounds of appeal for the CCRC to consider. The Commission insists that it doesn’t favour those cases supported by public campaign. ‘I do not use the word campaign myself,’ Robertson says. ‘Although the title of my book – Stephen Ward was innocent, OK? – is a kind of ‘East End in your face’. The book is laying down the gauntlet to the legal system saying that it has got it wrong and should admit the fact. It never has.’

A 1999 New Statesman profile by Marcel Berlins (The Radical Lawyers) identified Robertson, who first became known to the public defending obscenity cases such as the trial of underground magazine Oz, alongside a generation of lawyers such as Benedict Birnberg, Michael Mansfield and Helena Kennedy etc. Lawyers who, Berlins wrote, were ‘fearless in putting their often unpopular views across, and it was their badge of honour to be criticised intemperately by others in the legal system’.

‘I think a “radical barrister” is a contradiction in terms,’ Robertson says. ‘You cannot say that people who bow and scrape for a living and earn as much as the Bar has done in the past can be particularly radical. We might be radical in our private views but this in our legal work we are bound by strict and in the most part valuable conventions.’

He recalls in the early 1970s a High Court judge taking a shine to the young Robertson. ‘He decided to warn me against doing these obscenity cases which, of course, were political cases “otherwise you are in danger of becoming a member of the alternatives Bar and end up doing bomb cases”. “I thought that was the highest aspiration of a barrister.’