Spreading love not bullets at the world’s largest arms fair

Spreading love not bullets at the world’s largest arms fair 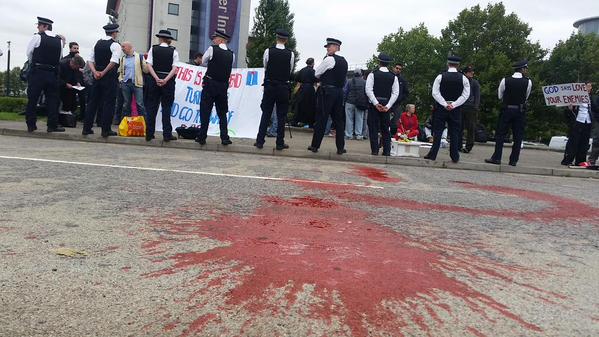 To the unsuspecting passenger on London’s Dockland’s Light Railway, last week might have seemed like any other. Except for the relatively small but vociferous collection of individuals, ranging from Quakers and priests, to students and healthcare workers, at Prince Regent’s Street station  protesting the biannual DSEI Defence and Security Exhibition, the world’s largest international arms fair taking place at the Excel Centre later this week (September 15 to 18).

Organised in association with major government departments, including UK Trade & Investment’s Defence & Security Organisation (UKTI), DSEI will receive up to 35,000 delegates at the controversial fair, to showcase a giddying array of weapons and surveillances technologies from over 1,500 suppliers. DSEI’s brochure states that this year will be ‘bringing the entire supply chain together on an unrivalled scale’.

The fair is intended to secure an ever-growing dominance for the UK within the global arms trade, an industry worth an estimated £1.5 trillion a year.

The exhibition has caused scandal in recent years for enabling weapons to be sold to countries with horrific human rights records and oppressive regimes. Exhibitors have also been caught selling illegal torture equipment contrary to domestic and international law, a discovery that a Whitehall source labelled, ‘regrettable’.

Undeterred, the government will once again extend a warm welcome to this year’s delegates hailing from Saudi Arabia, the UK’s biggest arms customer, Kazakhstan, to Egypt and Thailand. Saudi Arabia bought £4bn in arms last year despite warnings that its current bombardment of Houthi rebels is causing a ‘human catastrophe’ in Yemen. 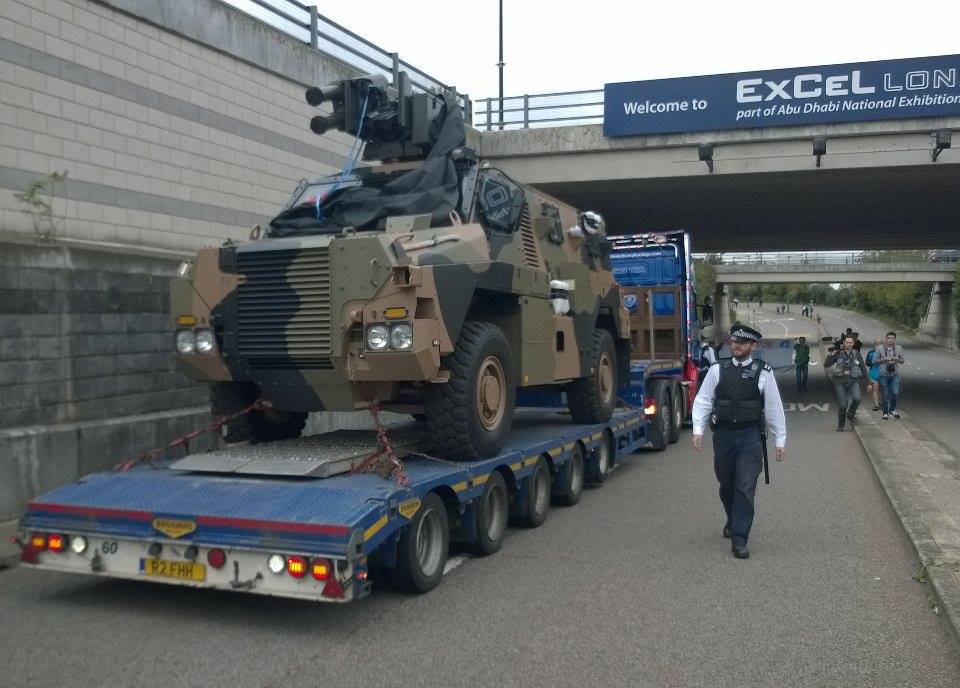 Award-winning film director, Amir Amirani, says the ‘euphemistically named Defence and Security Event’ happening next week, ‘could not be taking place in a more troubling time’.

He adds, ‘in another euphemism, the refugee crisis is called a “migrant crisis”‘. ‘But we should be in no doubt that the refugee issue is a result of the wars of aggression launched in the region since 2001, and attempts to undermine and overthrow regimes in the region, such as Syria, dating back before 2011,’ Amirani says.

‘The world has gone through enormous turmoil, seen global uprisings against dictatorships, capital, and corporate power, but it seems the one thing that never changes is the production and sale of killing machines, by the same people to the same people, regardless of changes in world affairs.’
Amir Amirani

DSEI’s describes itself as a ‘valuable forum for learning not just about the latest products, systems, technologies and services but also about world markets and how to access them….the regions concerned are Africa, Asia Pacific, Europe, Latin America, Middle East and North America’.

‘The wars happening around the world can often seem very remote but the origins start on our shores,’ says Andrew Smith, a spokesman for the Campaign Against the Arms Trade. ‘The war in Gaza last summer used British weapons; UK arms were used for repression tactics abroad including tear gas in the Hong Kong demonstrations last year, as well as in Egypt and in Bahrain.’

‘Our government is not an observer, it is an active participant in conflicts abroad,’ Smith adds.

Reports found that the UK had approved £7m of arms to Israel in the six months before the Gaza conflict in 2014 which killed 1,483 civilians, including 284 women and 369 children. Figures released earlier this year reveal that British companies secured export deals for weaponry worth £8.5bn and security equipment worth £3.4bn in 2014, making Britain the second largest arms exporter behind America. 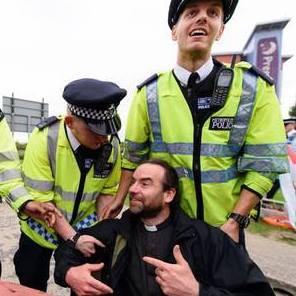 Throughout the week, Campaign Against the Arms Trade has been coordinating a week long marathon of protests and activities designed to disrupt DSEI’s preparations.

The police presence on day two of the themed demonstrations is stark; one security official comments there is a police officer for every protester, as people gather in a circle to sing, say prayers and conduct a funeral procession, culminating in fake blood being poured on the road and a carefully-crafted coffin placed beside it, amid signs that read ‘Dead End. Turn Around and Go the Way of Peace’, ‘War crucifies the innocent’ and ‘Spread love not bullets’.

An elderly man of about 85 with a walking stick makes his way determinedly to the road and kneels down next to a girl with a sign round her neck reading: ‘If war is an industry, how can there be peace in a capitalist world?’. As a steady line of blocked lorries form, the police look mortified.

I ask Smith why people are going to such lengths to protest about a relatively unknown event:

‘The arms trade relies on secrecy, and people not shouting about what it’s doing. We at CAAT want to give as much exposure to the reality behind the arms trade and show solidarity with the people at its receiving end.’

Holy disorder
I interview seasoned protestor, Chris Howson, a priest from Sunderland, who can be seen chasing down an armoured tank as it tries to gain access to the fair, and then moments later solemnly organising a funeral for an elderly parishioner over the telephone.

Howson has made ‘non-violent direct action’ and getting arrested a routine part of his ministry after leaving his former career in social work, yet he admits, ‘I was terrified the first time I went to a demonstration’.

Howson cites negative media portrayal and the increasing criminalisation of protestors as reasons why some might be hesitant to engage in civil disobedience; he notes the ‘dramatic shift’ in language used by law enforcement in dealing with protesters: ‘In the past you’d get accused of trespass if you were on a military base; now you might be done for an anti-terrorism offence.’ He adds: ‘Imagine trying to get a job with that kind of label.’

What about the idea of war as a liberating force, bringing an end to despotic regimes?

‘History proves that to be very, very wrong. There are not many instances where our bombing policies have improved the situation: Iraq, Afghanistan, Libya, Syria now, all suggest that bombing people does not work.’
Chris Howson

Howson says: ‘We as a nation have justified a lot of what we’ve done overseas by this threat of “people out there”. Our policies have turned us into a nation of Islamophobes, of people who are intrinsically wary of others, scared of Syrians coming in because they might secretly be from ISIS – when these are the people fleeing from ISIS!’

What motivates the UK’s involvement in foreign conflicts? ‘Well part of the reason we are here at the arms fair is because our government is sadly horrifically linked to the arms industry,’ Howson says. He continues, ‘There are a lot of people making a lot of money from war, including both Tory and Labour ministers who leave government and go on to get well-paid jobs in the arms industry.’

He points to examples such as former cabinet minister, Geoff Hoon, landing a leading job at defence company, Westland Agusta, the same firm that secured a £1.7bn arms whilst Hoon was Defence Secretary.

Similarly, CAAT notes that former British Ambassador Sherard Cowper-Coles was Britain’s Ambassador to Saudi Arabia when he pressured the Serious Fraud Office to drop its investigation into BAE-Saudi arms deals. On leaving the Foreign Office, he was given a job with BAE Systems.

Research by the Guardian in 2012 found that senior military officers and MoD officials received approval for 3,572 positions in arms companies since 1996.

In a statement, the Home Office justified its involvement in the DSEI arms fair: ‘This exhibition brings UK industry, law enforcement and security professionals together in a secure environment. A thriving security industry is vital to help cut crime and protect the public and so it is important these products and services can be showcased and expertise shared.’

Equally, DSEI organisers defended the fair, saying it will ‘pour more than £30m into the capital’s economy’. The comment came in response to a PM question put by Green Leader, Caroline Lucas, about the connection between the current Syrian refugee crisis and the ongoing arms trade. 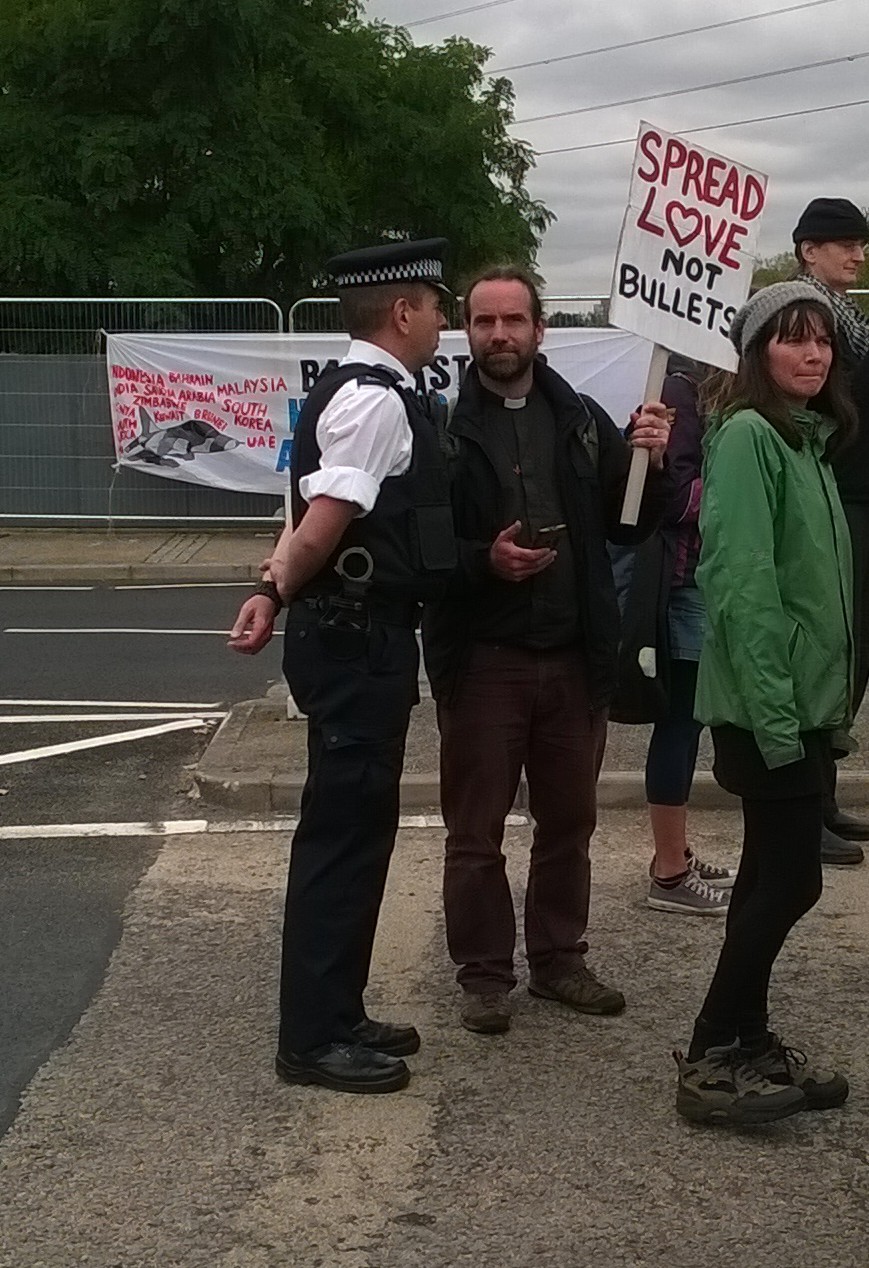 The protests are set to culminate in a Day of Action on Saturday and Monday, when DSEI will launch its event with a gala banquet on the Thames.

I ask Amirani whether this kind of protesting can be effective; Amirani recently directed and produced a documentary, ‘We Are Many’, exploring global protest movements after 15 million people took to the streets to march against the Iraq war: ‘Whilst street protests and people power have not yet managed to stop arms sales, direct action has been effective in sabotaging bases and equipment.’

‘In time, I believe if people realize the power they have, exercised together, they can be effective in eventually bringing about pressure to move industries away from arms manufacturing to more peaceful and socially useful enterprises.
Changes such as these are not wrought through voluntary action from the industry, but demanded and facilitated by people.’
Amir Amirani

‘Peoples’ determination does change things,’ says Reverend Howson. ‘We live in a better world than was around 100 years ago. All that change comes from people being willing to live out their beliefs and their faith. So I’m very optimistic that things can change.’

‘The idea that nothing can be changed is just a lie perpetrated by those who benefit from the status quo,’ he says.

World’s largest arms fair opens despite week-long protests
Governments are routinely 'over-policing, over-prosecuting…
Security guard who led strike against outsourcing to take…
Prince Fosu died 'in plain sight' at Harmondsworth detention…
'We are not the dirt we clean': Migrant workers during the…