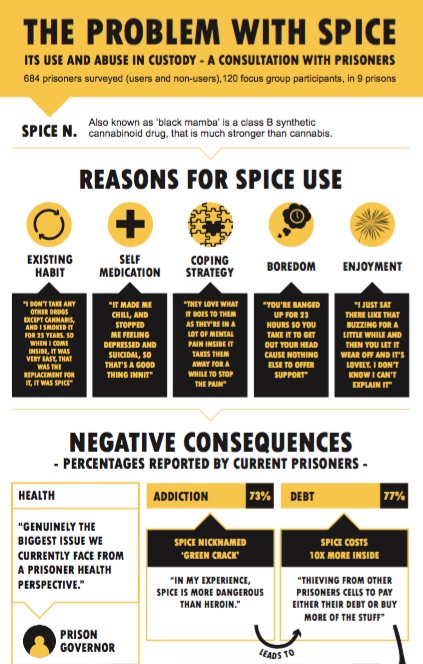 An NHS-commissioned report has raised fears of an ever-worsening epidemic of ‘legal highs’. An ex-offenders’ organisation, User Voice, spoke directly to current prisoners in nine jails across England and found these prisons were ‘awash‘ with Spice, a synthetic cannabinoid which is highly addictive and has relatively unknown health effects but which has been linked to 39 deaths in prison.

The report suggests that the effects of the drug  – known as the ‘bird killer’ because of its ability to make time pass in a blur for prisoners –  are variable and often dangerous, with prisoners reporting emergency ambulance call outs on a regular basis. One prison governor interviewed called it the biggest health problem facing prisons.

According to the report, Spice-related seizures in prisons in England and Wales have shot up from 15 in 2010 to an estimated 737 in 2014. There have been 39 reported NPS-related deaths in prison between 2013 and 2015. For the User Voice research a questionnaire was sent out to 684 prisoners in nine prisons and separate focus groups were conducted with some 120 prisoners.

The Psychoactive Substances Act came into force last week criminalising Spice and other variants of the drug. Inside prisons their ubiquitous presence is, according to the report, leading to inmate debts, bullying, sexual exploitation, mental health breakdowns and even death.

Spice seizures in prisons in England & Wales climbed from 15 in 2010 to an estimated 737 in 2014. Prisoners listed associated problems such as addiction (73% of those questioned) with some calling it more addictive than heroin; debt (73%) with prisoners indebted to inmate dealers and, as a result they were often bullied and exploited; violence (62%); as well as physical and mental health problems.

The report (Spice: The Bird Killer – What prisoners think about the use of Spice and other legal highs in prison) recommended a therapeutic approach to treating addiction, rather than punishment, increased training for staff, and for resources also to be focussed on non-users as well as better use of peer support services.

So profitable are these drugs inside that a former governor was quoted as saying that  Spice was ‘raining over the walls’. Apparently, dealers can afford to throw multiple packages into prison yards because they make enough profit from just one getting through security.

The report also explicitly linked the increase in use of Spice with the cuts to the prison service. Fewer staff employed within prisons has, it was reported, meant less control over smuggling into prisons, by both prisoners and staff, as well as less control over prisoner behaviour. The increased time spent by prisoners in their cells was highlighted by User Voice as another factor in the increased use of psychoactive substances.

The fact that the presence of these drugs cannot be picked up on by conventional testing was given by almost seven out of 10 users as a reason for taking it in prison. So far there is no test for Spice, although the penalties for possession in prison is a maximum two year prison sentence.

The widespread use of so-called ‘legal highs’ has been commonly attributed to attempts to relieve boredom and, as the nickname ‘bird killer’ suggests, make time in prison pass more quickly. This peer-led enquiry found instead that Spice was more often used as a coping mechanism and to self-medicate. These substances were already banned in prisons, but the report suggests that the criminalisation outside of prison walls will only worsen the already dire situation behind them as the drug becomes more expensive and prisoner debts rise and desperation increases.

Our print magazine is Proof. Contributors include Michael Mansfield QC, Bob Woffinden, David Rose, Eric Allison and Ian Cobain.
Buy Proof Magazine
The latest issue (Why legal aid matters) includes Helena Kennedy QC and Martha Spurrier in conversation, David Conn on the legacy of Hillsborough - plus how to build your own law centre.
Joanna is a civil liberties solicitor with a background in challenging police misconduct and inquests following deaths in custody

Covid-19: Pregnant women and young mothers to be released…
Only 33 prisoners let out under Covid-19 early release…
HMP Wandsworth: ‘crumbling, overcrowded, vermin-infested…
Covid-19: Two staff deaths at Pentonville prison
One in five prisoners out of their cells for less than two…