INTERVIEW: Director of Liberty, Shami Chakrabarti, talks about the launch of her new book ‘On Liberty’ as well as discussing today’s threats to our freedoms and how the biggest threat to our democracy comes from ‘complacency and comes from within’.

Speaking to www.thejusticegap.com, Chakrabarti described how terrorism ‘can only provoke us’ into ‘disproportionate, inappropriate, counter-productive actions’ that don’t make us any safer but certainly make us less free.

Chakrabarti’s new book focuses on the West’s response to 9/11 and how it has morphed into a ‘period of exception’ whereby the rule of law and human rights are often ‘too costly’.

‘Even President Bush, even in the moment after 9/11, wouldn’t have contemplated let alone suggested in public the repeal of the American Bill of Rights – that would be unpatriotic; that would be giving the terrorists the victory and yet, in the UK, senior politicians routinely talk about scrapping our modern bill of rights which is the Human Rights Act. I think it’s incredibly important that at the very least we all read the Human Rights Act and understand what it is we have to lose.’

Last week justice secretary, Chris Grayling, said that the Conservatives wanted to scrap the Human Rights Act so that the final decisions in controversial cases could be made by the supreme court rather than the European court of human rights. 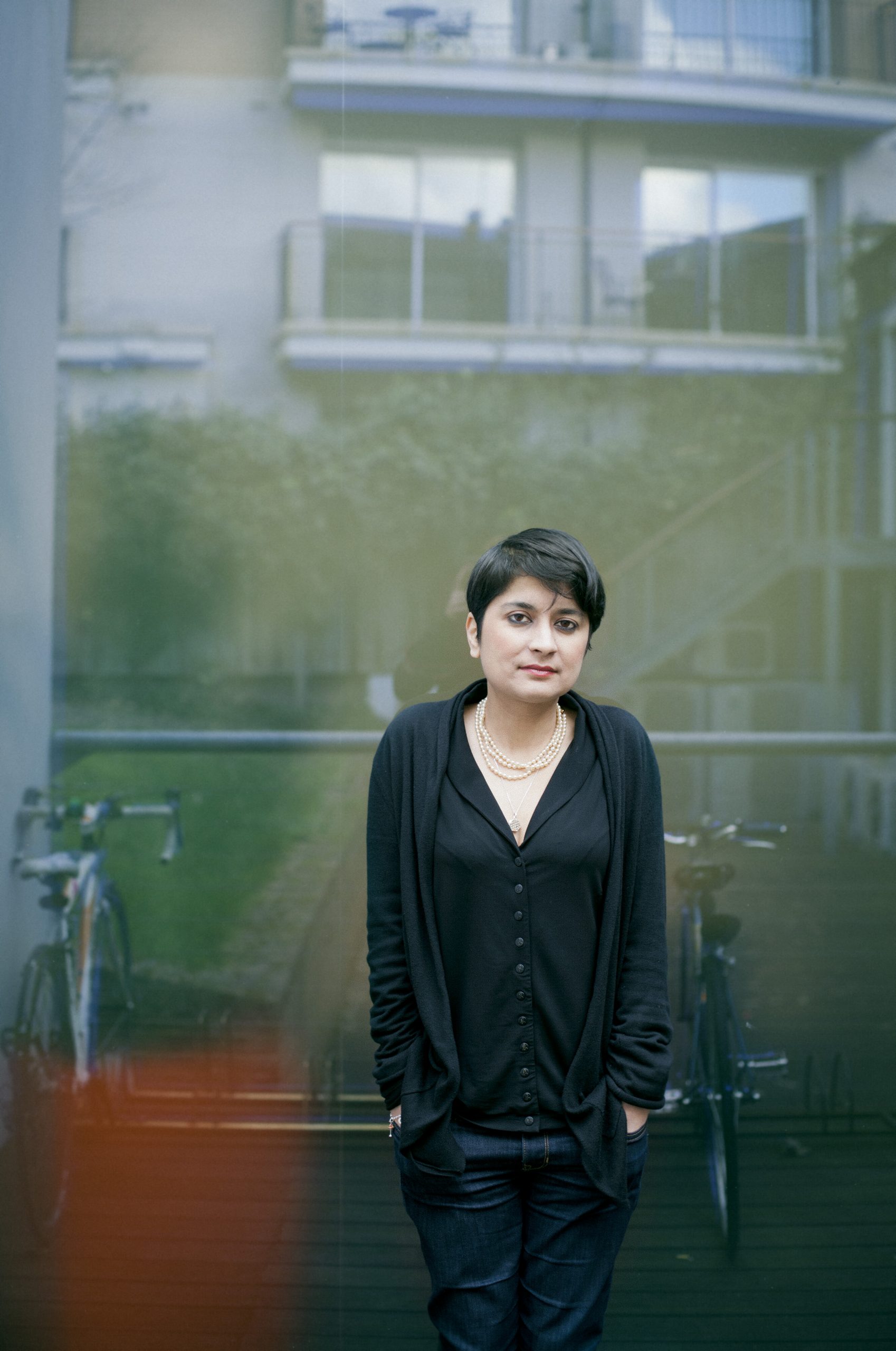 The director of Liberty warned that we have to make a choice:

Chakrabarti explained how every human life is ‘precious’ no matter where it begins – we are all of ‘equal worth’ and if we don’t think that way we should ‘be careful what we wish for’.

During a time in which British aid worker David Haines, and two US journalists Steven Sotloff and James Foley were beheaded by the terrorist group calling itself the Islamic State (IS), new anti-terror legislation to strip suspects of their passports to stop British-born extremists from returning to the UK has sparked debate. Chakrabarti said:

‘I have no problem with arresting people, charging them and convicting them – even incarcerating them for long, long periods when they’ve done terrible things and when they present a threat to people’s lives.

‘What I do have a problem with is a country like Britain trying to ditch its responsibilities both in terms of giving fair trials to suspects and in terms of protecting the world by ditching its own citizens – by if you like – dumping them like toxic waste into the international community when they, on the one hand, could be innocent in which case they’re being terribly punished without a fair trial; on the other hand if they are dangerous they should be convicted and behind bars here in the UK.’

The director of Liberty described herself as the ‘product of immigration to the UK’ and said how it was ‘hardly surprising’ that she thinks that immigration has ‘enriched’ this country – just as it enriches the world. Chakrabarti explains how we live in a ‘shrinking interconnected planet’ and how the way in which we divide ourselves up into little silos and insulate ourselves from things that are happening all over the world is really ‘more foolish than ever it’s been’.

Chakrabarti explains how one of the ‘worst trends’ since 9/11 has been the move towards the ‘death of privacy’ and in particular the idea that the innocent have nothing to fear – ‘that’s just nonsense’.

‘We’ve seen the way that surveillance can be abused, we’ve seen the way that undercover police officers have gone into the environmental movement and formed sexual, intimate relationships with women over years and years when they were actually living a lie. We’ve seen undercover cops go into Doreen Lawrence’s family when they should have been investigating her son’s killers. So, that’s what I say to people who say ‘nothing to hide nothing to fear’ – look at my friend Doreen Lawrence, look at those innocent environmental protestors – just look at the way in which surveillance can be abused.

‘Of course there must be lawful and proportionate surveillance – you need it for criminal investigations – but there must be privacy too because without privacy there can be no intimacy, no dignity and no trust between human beings.’

‘On Liberty’, touches on previous legislation under section 44 of the Terrorism Act 2000– ruled ‘unlawful’ – in Liberty’s landmark legal case, in 2010, before the European Court of Human Rights. On the subject of stop and search Shami said it was obvious that there has to be a power to stop and search on reasonable suspicion of criminality in any democracy, just as there has to be a power to arrest. However, ‘the biggest problem’ is when you have very broad police powers to search without real suspicion of an individual:

‘…You’re stopping, in effectively – in a discriminatory way – and you will see large parts of the population, in particular – it tends to be young, black and Asian men who are routinely stopped and searched – that will just alienate them, that in the end will probably create more criminals and more terrorists than it would ever prevent.’

On Friday, UK parliament joined the US in approving air strikes against ISIS in Iraq. On the subject Chakrabarti said:

‘Perhaps one of my best friends in the world – particularly in the human rights campaign – is Anthony Romero who runs the American Civil Liberties Union. I want people to understand that you don’t have to be anti-American to want to shut down Guantanamo Bay; you don’t have to be anti-American to believe that drone strikes are dangerous and wrong. I think it’s about time that those of us living in old democracies like Britain and the United States showed another side of the debate, another side of our national and international life.’

As a member of the panel of the Leveson Inquiry, Shami Chakrabarti spoke of her views on the new press regulator IPSO:

‘I do believe in self-regulation of the free press. I don’t believe in imposing ethical regulation from outside by politicians – I think in the end that’s just too dangerous in a democracy’.

Liberty is celebrating its eightieth year, this year and has been run by Shami since 2003:

‘Liberty is not about me. Liberty is the national council for civil liberties; it’s been around since 1934 when the hunger marches were brutally oppressed by the Metropolitan Police in Hyde Park and the spirit of Liberty is a restless spirit of members.

‘We need members, more members, to join us every year and it’s the spirit of values in respect of fundamental rights and freedoms that run very, very deep in this country: no torture, free speech, personal privacy, fair trials, equal treatment under the law – perhaps the most important principle of all. I have no doubt that the energy of my colleagues and my members will keep this organisation going for at least another 80 years.’

‘These are not women who went to law school like me but women who were thrown in to the human rights struggle because of tragedy or potential tragedy affecting their families but then what they did was they took that experience and tried to share it with broader campaigns, campaigns not just for their own children but for everybody else’s and that in the end is what human rights is all about.’

On the back cover of her new book, the director of Liberty is described as ‘the most dangerous woman in Britain’. Shami said:

‘A Sun columnist once called me the most dangerous woman in Britain – a man called Jon Gaunt – and it was a wonderful moment and I’ve dined out on it ever since.’

‘The really interesting twist about Mr Gaunt was he used to have a massive problem with me and think that I was someone who was all about defending foreigners and terrorists and people not like him but of course then what happened was he was very unfairly suddenly sacked from his radio programme one day and he found that the only way to try and get redress in relation to the way he’d been treated was under the Human Rights Act, because Article 10 of course gives him and everyone the first express right to free speech in this country and he has a case pending in the European Court of Human Rights.

‘I like the most dangerous woman in Britain because it’s clearly a bit of a joke but it also reminded me that people do actually love human rights their own it’s just other people’s that are sometimes a problem.’

Chakrabarti described that the most important message in her book is that:

‘We need to remember that when we’re promised new bills of rights that will only be for good people or only for people like us – we just better be careful what we wish for because you won’t know what you have until it’s gone.’

'A call to arms': Austerity justice book published today
Unamended ‘spy cops’ bill risks abuse of human…
LAUNCH: 'A vital exposé of a justice system…
'The attack on "access to justice" is ideological…
Government response to Faulks review ‘cover for…