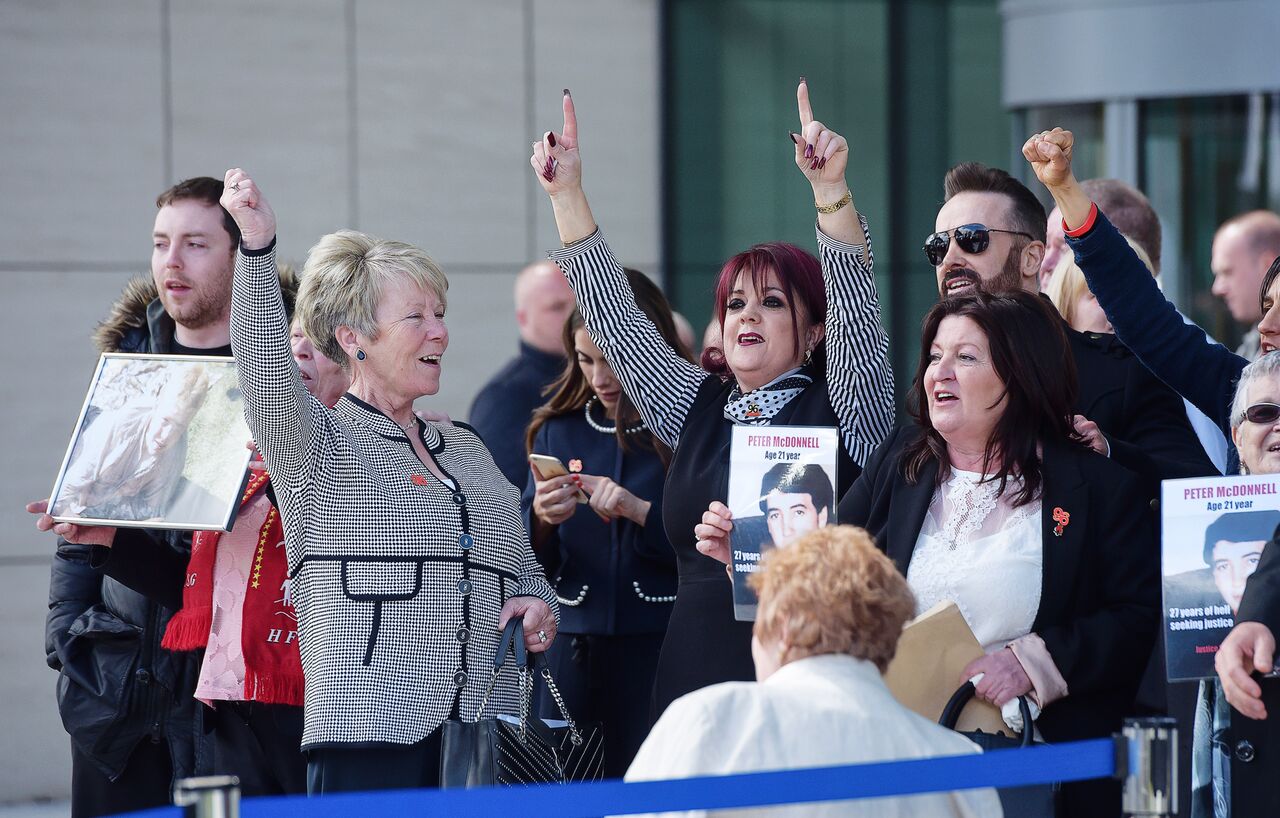 In the aftermath of publication of the report of the Hillsborough Independent Panel in 2012, David Crompton, the Chief Constable of the South Yorkshire Police issued a fulsome apology.  He said:

‘On that day South Yorkshire Police failed the victims and families. The police lost control.  In the immediate aftermath senior officers sought to change the record of events.  Disgraceful lies were told which blamed the Liverpool fans for the disaster.  Statements were altered which sought to minimise police blame. These actions have caused untold pain and distress for over 23 years.  I am profoundly sorry for the way the force failed on 15th April 1989 and I am doubly sorry for the injustice that followed  and I apologise to the families of the 96 and Liverpool fans.’

Now, in my experience police officers don’t much like having to say ‘sorry’ once, much less twice.  But David Crompton was at it again on Tuesday as soon as the jury in a new Hillsborough Inquests had finished delivering its devastating verdicts.

This is what he said in Tuesday:

‘On 15th April 1989 the South Yorkshire Police got the policing of the FA Cup semi-final at Hillsborough catastrophically wrong.  The force failed the victims and failed their families… . Today, as I have said before, I want to apologise unreservedly to the families and all those affected.’

You would be forgiven for thinking that Mr Crompton who had nothing at all to do with Hillsborough disaster, must be a thoroughly decent man making sincere and heartfelt apologies, not just once but twice, that no one could misinterpret. Admitting your force, even when not under your command had got things ‘catastrophically wrong’ is not something you will hear a senior police officer say very often.

It might interest you to know that when Mr Crompton was represented by a legal team of solicitors and barristers at the recent Inquests, it seemed he must have forgotten what he had said back in 2012.  You would imagine that he would have instructed his counsel to inform the court that he stood by his statement from 2012 and would not be saying anything in the Inquests that would be in any way inconsistent with that apology.

So you may wonder why his counsel, no doubt on the instructions of their client Mr Crompton, sought to piggyback on the loathsome and repellent assertions repeatedly made by counsel for the match commanders, Mr Duckenfield and his sidekicks Marshall and Greenwood that the disaster was all the fault of drunken, hostile, ticketless fans most of whom turned up late expecting to gain entry to the stadium.

Why otherwise were witnesses questioned to elicit that fans were spitting on police officers outside the perimeter gates of the stadium, or that they had ‘forced their way’ through those gates that the police were trying to close to ease the pressure on the fans near the turnstiles, or that fans could simply have withdrawn themselves from the crush outside the ground?  Why was a witness questioned to elicit that fans outside the ground became unresponsive to police instructions to stop pushing?  Why was a witness asked to confirm that he had previously said in a written statement in 1989 that during the rescue effort ‘three or four fans’ had assaulted a press photographer? Why was Mr Marshall the match commander responsible for the outside of the Leppings Lane entrance asked to confirm further examples of alleged bad behaviour by Liverpool fans?

What did any of this have to do with the current Chief Constable? How could he instruct his legal team to ask such questions and adopt such a line if he meant a single word of the apology issued in 2012? The purpose of the questioning is obvious. The same Chief Constable who had admitted that his force had caused the disaster and then tried to cover it up was trying to persuade the jury that it was after all, all the fault of the fans.

You will no doubt remember that as early as the evening of the disaster the then Chief Constable Peter Wright had confirmed that the exit gate C, through which some two thousand supporters entered in just five minutes after 14.52, had been opened on police instructions. That is on orders from the match commander David Duckenfield. During the Inquests it became apparent to us that the police investing the disaster afresh, known as Operation Resolve, were seriously contending that the gate was not in fact opened in response to Mr Duckenfield’s order but instead, at the behest of a junior police officer or a gateman acting on their own initiative.

This was such a ridiculous idea that even the team of lawyers representing Mr Duckenfield rejected this nonsense. This theory finally bit the dust after our audio-visual team had done a brilliant bit of detective work in which they had been able to identify the order to open the gate being given in the background on tapes recording traffic between the emergency services. But not before Mr Crompton’s lawyers had tried valiantly to prove that this crackpot theory had legs and that in fact gate C was not opened in response to Mr Duckenfield’s order at all.

How you may ask did those instructions to his counsel square with the apology he had given in 2012? 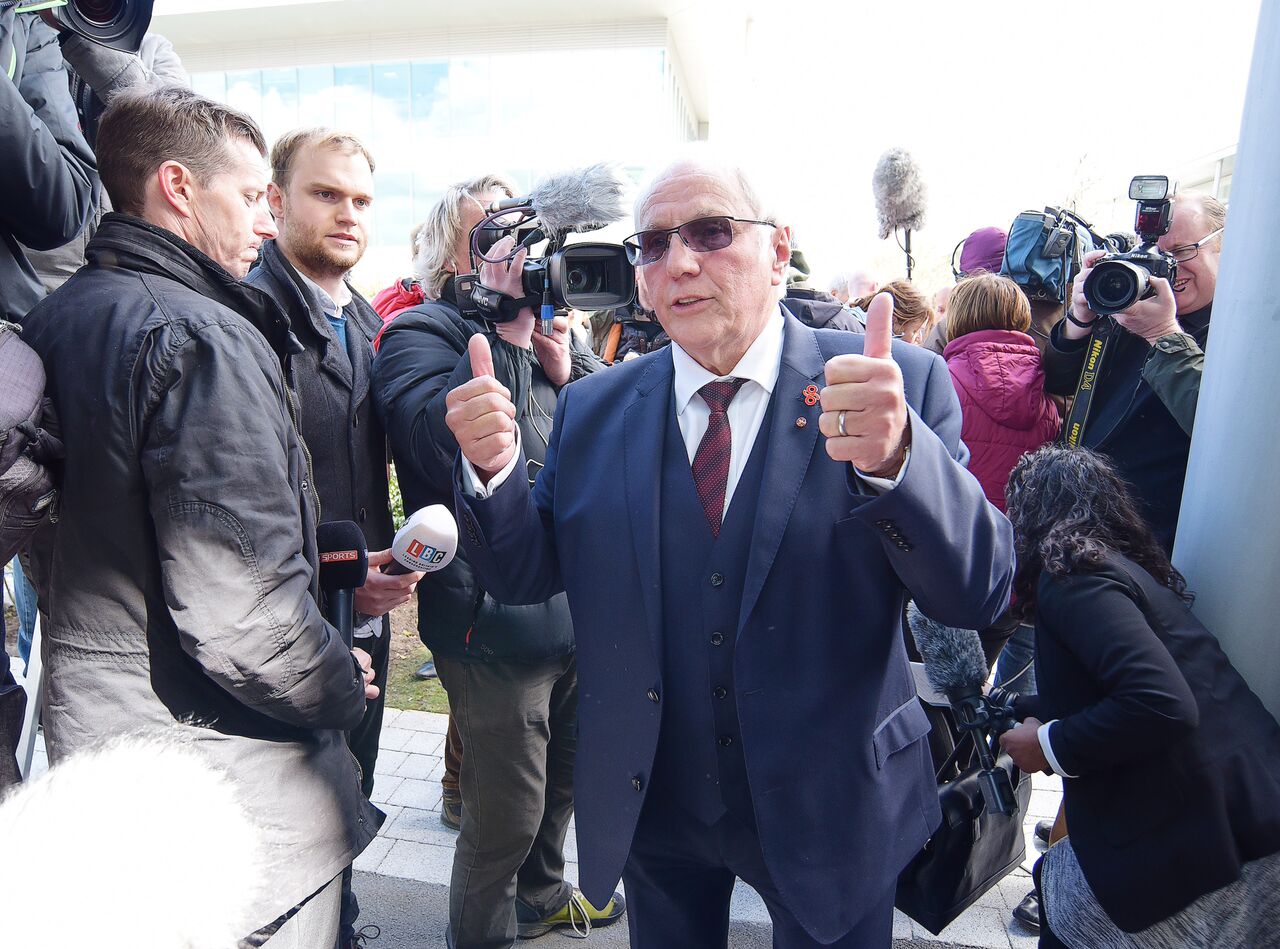 Trevor Hicks giving the thumbs up to the press on Tuesday

And if you still think Mr Crompton is a decent man you have to consider how someone who conducted themselves in the way demonstrated above during the Inquests then had the bare-faced cheek to issue another abject apology as soon as the game was up and the jury had confirmed that the disaster was indeed the fault of the police and not the fans. No wonder there was a seriously adverse reaction to Mr Crompton’s latest apology. No wonder the Home Secretary was not happy with it. Nor were many others including I suspect every single family of the 96 and the many others affected by the disaster.

So no surprise that Mr Crompton is now toast and that the Police and  Crime Commissioner for South Yorkshire has indicated that he will not be resuming his post before his resignation apparently scheduled for later this year takes effect.

But that is not enough in this case. Mr Crompton should not be allowed to resign. For what he has done he deserves to be sacked right now.

And in the confident expectation that some excuse will be found not to sack him, I hope that before Mr Crompton finally swans off to his Mediterranean retirement home on a fat publicly funded pension  he will at least be good enough to answer these questions, because frankly I haven’t got a clue.

And in the absence of any answer its hard to avoid the conclusion that Mr Crompton issues apologies not because he means a single word of what he says but because he thinks it is politic to do so. And people like that deserve the contempt of us all.
This article first appeared on Mark George QC’s blog here

Hillsborough officers have no case to answer, rules judge
Hillsborough chief cleared over deaths
DPP apologises to Hillsborough families but no…
Concern over 'corrosive effect' of police…
Police accused of 'cover up' over death of Sean Rigg