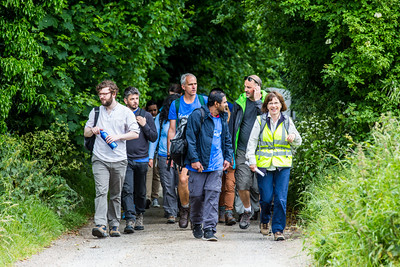 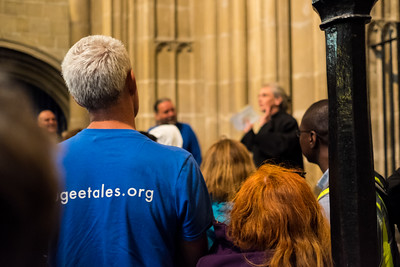 This piece was written for #Unlocked15 by Professor David Herd from the University of Kent.

As the subtitle of the project had it, Refugee Tales was ‘A Walk in Solidarity with Refugees and Asylum Seekers (from Dover to Crawley via Canterbury)’. The route was the North Downs Way, which largely coincides with the Pilgrims’ Way, being the ancient track along which people once travelled from Hampshire (and points in between) to Canterbury.

Organized by Gatwick Detainees Welfare Group, the whole walk took eight days and at each stopping point walkers and the public at large were presented with two tales: one, the tale of an asylum seeker, former immigration detainee or refugee; the other of a person – for instance a lawyer or interpreter – who worked with (or, as in the case of The Lorry Driver’s Tale, whose work brought them into contact with) people seeking asylum in the UK. Each tale was a collaboration between an established writer and the person whose tale was being told and the structure of the whole series drew The Canterbury Tales.

The project thus had three fundamental elements: a culturally charged sense of space, the visible fact of human movement, and an exchange of information through the act of telling stories. It is important also to note the dates of the project: 13 to 21 June 2015.

Such have been the events of the intervening three months that this spectacle of human movement, largely symbolic in intent, has since taken on a somewhat different aspect.

Let’s think about the date first. When Refugee Tales took place it was ahead of the historical curve; only just, as it turned out but ahead nonetheless.

For those who witnessed it, the sight of (at any one point) between 80 and 150 people, a good number of whom were asylum seekers and ex-detainees, crossing the landscapes of Kent and Sussex, was a powerful spectacle. The point of the spectacle – it came to be understood as a spectacle of welcome – was that people who are hidden by and from the culture, rendered invisible by the procedures of the State, were here taking and asserting their places in the landscape. We were blessed by the weather – it only rained once – and so there were days when it was possible to see the whole party strung out across the countryside, walkers in solidarity stretched a mile or more into the distance.

It is this aspect of the project’s significance that has most been altered by recent events, though it is important to register a shift within that chronology. At the moment of the project, reporting on the so-called migrant crisis was concentrated on Calais. The repeated images, on which organisers of the project were invited to comment, were of people running alongside vehicles or climbing into lorries, and the tone of the reporting was one of hostility. That was June.

By mid-August the images had decisively altered.

The sight of tens of thousands of refugees – or people seeking asylum – walking through Hungary towards Germany and other parts of northern Europe, became the trigger for a notably different tone and perhaps, temporarily at least, the makings of a different discourse.

As the project relates to this historical event, the consequence is that it can’t ever look the same. When we walk next time, and in so far as the walk constitutes a visual impression, we will be walking after the historical fact. 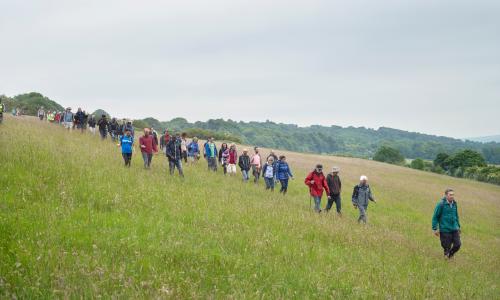 In crucial respects, however, the geopolitical shift effected by the migrant crisis makes the experience of Refugee Tales, which is to say the space it opened up, all the more consequential. I mean space in the larger, metaphorical and cultural sense, the sense that utopia points to. It’s that sense of space that I want to come back to at the end. There is, however, a more literal sense of space that the project addressed, and to understand that sense we need to know a little about the processes of detention and post-detention existence. In theory, a person is held in immigration detention at the point at which they are imminently to be removed to their so-called country of origin. The arrangement, which is to say the detention, is, in theory (the whole process requires many caveats), designed to be temporary. It is also indefinite.

The consequence is that a person who is not at that point charged with any crime can be detained for months and years – at the Dover Immigration Removal Centre the longest period of detention is four years – pending their removal. Pending is the word.

We are deep, here, within the lexicon of suspension. Following that period of indefinite detention some people, less than half as it turns out, will actually be removed. The others, for whatever reason, usually to do with the impossibility of securing travel documents, will be quote unquote released back into the community. Once having been released they will be accommodated in a Section 4 accommodation, which their bail conditions will specify they have to return to every night (an attendance requirement sometimes reinforced by a tag).

Because they can’t work they receive a form of relief, paid not in cash but in the form of a voucher called an azure card, one function of which is that, among its various conditions of use, it can’t be used on public transport. That prohibition on the use of public transport is relaxed once a week, or fortnight, or maybe once a month, being the frequency with which the ex-detainee has to sign at a Home Office reporting centre. The effect is to fix a person in a given location, often for months and years on end. Except that with that stasis – part of the lexicon of detention – comes the risk that they might be ‘dispersed’ (relocated to another part of the country), or re-detained (which is common). The result of all of the above, is that ex-detainees (who are so-called failed asylum seekers, but who might sometimes, perhaps years later, secure refugee status) have a deeply (and strategically) compromised relation to public space.

It is against this background that the Refugee Tales project inhabited or occupied space the way it did. One can read this in a cultural-historical way. Simply put, it mattered a lot that the walk followed ancient pathways, that it cut across tracts of southern England intimately connected to a national view.

It is in these spaces as much as any, and in the idiom of these spaces, that the language of national identity forms and perpetuates, functioning as it does to hold the migrant out of view. Serviceable as that language of national identity might once have been as a way of organising a relation to space, what the events of the summer show – though we surely knew it already – is that such a way of orienting ourselves to space badly needs to be renewed. Refugee Tales was one form of that renewal: the crossing of a deeply national space by people whom the nation has organised itself in order precisely to keep from view.

There are many implications of this changed relation to space, not the least being the way we think about cultural expression. Take Chaucer, the father of English poetry, but in whom the writers involved in the project found a deeply complicated geography. What several writers become pre-occupied with was the Man of Law’s Tale, the events of which see an Italian princess taken across the Mediterranean to Syria, from which regime she flees to the north of England, where, once arrived, she is falsely accused of a crime.

This is greatly to simplify, both the original tale and the writers’ interest in it, but it is to indicate a political geography in Chaucer that intervenes deeply on any assumption of a national frame. Or consider the great opening sentence of The General Prologue, with its seemingly deeply rooted sense of climate and environment, but in which, even before their rootedness has bedded down, one is introduced to the pleasure and necessity of movement: ‘And palmeres for to seken straunge strondes,/ And ferne halwes, kowthe in sondry londes.’ Deep within Refugee Tales is a proposal that all aspects of the language of national space be re-read, that we read back through to find the expression that gestures outwards. 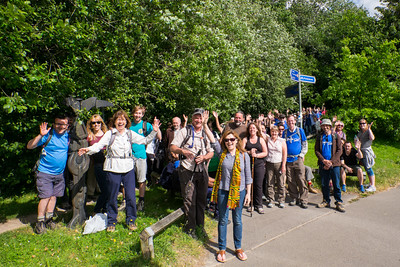 There is, however, also, a simpler thing to say about the way Refugee Tales occupied its space from the 13 to 21 June, which is that – for the duration at least – people involved were more at ease. For all that, each evening, the tales themselves focused attention on traumatic and unjust events, the days were charged with something like relief. For those among the party who were ex-detainees, this sense of relief came – as they variously said – from the fact of being out and about, a way of being in space that for some hadn’t been available in several years.

For others in the group, let’s call them people whose rights of residence were not under scrutiny, the relief came from occupying a space in a way that was not governed by the prevailing discourse. For sure, the whole event was too real to be called a utopian reality, and indeed I would hesitate to give it any kind of name. I would say, though, that for the duration of the walk there was a relation to space that seemed, as we walked, to be ethically sustainable.

Our print magazine is Proof. Contributors include Michael Mansfield QC, Bob Woffinden, David Rose, Eric Allison and Ian Cobain.
Buy Proof Magazine
The latest issue (Why legal aid matters) includes Helena Kennedy QC and Martha Spurrier in conversation, David Conn on the legacy of Hillsborough - plus how to build your own law centre.
David is a poet and head of the school of English at the university of Kent