‘When we got arrested the colour went out of my life, quite literally,’ Patrick Maguire tells me. ‘For about 18 months, the police three times a week would beat the shit out of me.’ This is an edited version of an article that appears in issue 4 of Proof magazine. 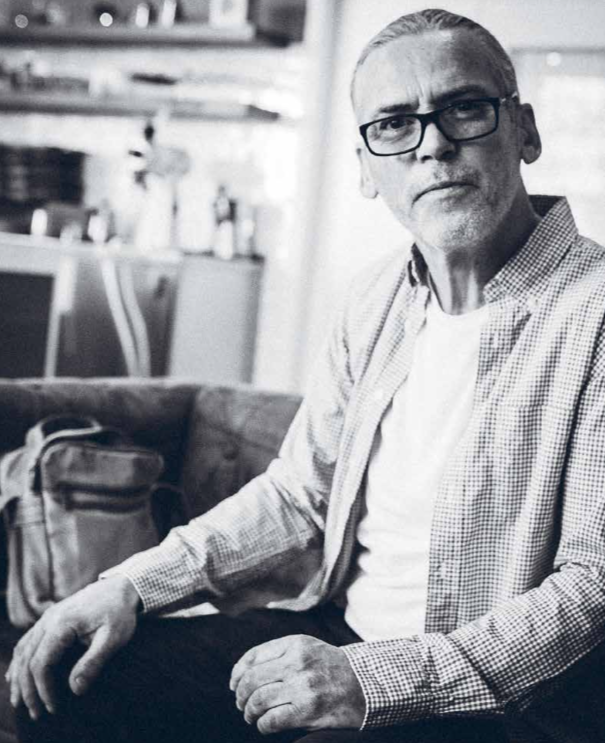 The now 57-year-old artist was wrongfully imprisoned at the age of just 14. He spent the first weeks of his sentence in solitary confinement because, as was explained to the uncomprehending boy, of concerns about his ‘suicidal tendencies’. It was the first time in his life that it had occurred to him that it was possible for a person to take their own life.

Patrick Maguire was arrested with his parents Annie and Patrick senior, his 17-year-old brother Vincent, his uncles Giuseppe Conlon and Sean Smyth, and family friend Patrick O’Neill. Giuseppe’s son and Patrick Maguire’s cousin, Gerry Conlon, had been wrongly accused of carrying out the 1974 IRA bombing of two pubs in Guildford. The attack killed five people and injured 65.

Conlon, Paul Hill, Paddy Armstrong and Carole Richardson became the ‘Guildford Four’ and, together with the ‘Maguire Seven’, were caught up in one of the most shameful episodes in English legal history. The Guildford Four were convicted as a result of false confessions beaten out of them by Surrey police.

Police and the courts fell prey to anti-Irish hysteria, overlooked an absence of credible evidence and, as a consequence, 11 innocent people’s lives were trashed. The Guildford Four and Maguire Seven had their convictions overturned in 1989 and 1991 respectively.

I spoke to Patrick Maguire at the flat which he uses as a studio, just a couple of miles away from the old family home where he was arrested 44 years ago.

A BBC documentary recently revisited the shameful episode A Great British Injustice: The Maguire Story available on BBC iPlayer. ‘This is the story of what British justice has done to an entire family,’ begins the presenter Stephen Nolan. ‘And at the heart of this story is what it has done to a 14-year-old-child who, to this very day, is destroyed as a result of it.’

The programme is occasionally harrowing. The footage of Maguire shows him close to breaking down. The investigating police officers tortured the family. His mother recalls how they thrust her son’s head out of the window and threatened to throw him out of the building in an attempt to make him falsely confess and implicate his own parents.

Maguire recalls the first time he saw his mother a week or two after their arrest. He walked past an open cell door to see her on her knees. ‘If I hadn’t recognised my mother’s voice, I wouldn’t have known it was her,’ he recalled. ‘They were all laughing. She said “son” and they just pulled her back into the room.’ After his release, Patrick Maguire lived on the nineteenth floor of a tower block. His mother told the program that she constantly wor- ried that he would ‘do something stupid’.‘Tome, they have destroyed him,’ she said.

How was it for him to watch? ‘To see what I experienced as child, it just blew my fucking brains. It really did,’ he replies.

Patrick Maguire is a self taught artist who works in charcoal, pastels, ink and pencil on heavy lining paper. ‘I was a decorator for 15 years,’ he explains.The dreary brutality of 1970s prisons haunts his abstract visions.

His sparing use of colour represents his own loss of innocence. He explains: ‘It’s about the colours in my life as a kid. I want to find those colours again and reclaim them.They were abused as much as I was.’ He points to a sketch tacked to a noticeboard of a colour chart with the colours fading to nothing. ‘This is what happened to them,’ he says. ‘They were rubbed out.’

Maguire’s passion for art predates his arrest or, as he puts it, the moment ‘when I was rudely interrupted’. ‘If the police had come to arrest me on a different day, a Wednesday or a Friday, they’d have caught me sitting at the coffee table in our kitchen drawing cartoons. I would be copying the Beano and the dandy.’When he was in prison, he would sketch cartoons in letters he would write to his parents. ‘You run out of things to say. It’s always the same old shit every day. So on the back page I’d draw a cartoon.’

Maguire wasn’t ‘a model prisoner’, as he puts it. ‘I shouldn’t have been there in the first place. so I wasn’t going to take shit from anyone.’ He recalls coming back from the workshop to the cell one day. ‘All my crowns [paints] had gone. I got a letter from the Home office saying that I was defacing prison property. I told them to fuck off and locked myself in my cell for three days.’

As he tells it, his journey as an artist has been about rediscovering the colour of that lost childhood. A recent exhibition was called ‘Out from the darkness’. ‘When someone says to me a picture looks like a child might have done, I love it. A child did do it. It just took 40 years for it to come out on paper,’ Maguire says.

If there was any colour in the prison days, he says it was ‘worn out’ – like a faded green he often uses which, he says, resembles the uniform that prisoners had to wear for visits or the door to his cell.

A recurring motif is a red cell surrounded by a sea of dull grey. Maguire talks about it in terms of the red light the guards insisted on being on through – out the night when he was in solitary confinement. In an interview with the Irish News, he explained the unceasing red’s significance in vivid terms. ‘At night-time, it seemed to me like I was in this dark cell in a red box. If I wanted to lie down to cry, which was all I did ,just the thought of that the red light got deeper and hotter and my breathing got worse. Just the thought of it drained every feeling out of me that I can only recognise now as an adult.’

‘As a parent, you know that moment when a kid does that open-mouth thing when they have caught their breath and you don’t know if they are going to cry or breathe? You want them to make a sound – well, that was me every single night.The only thing they didn’t take was my soul. I have to believe that. And that soul was the child.’

His pictures are often made up of cell-like patterns or grids over-scored repeatedly with lines. There is an orderliness and symmetry to his work as well as a suggestion of mania.‘That’s the prison side of things, being neat and tidy,’ he says. ‘They had me folding the blankets in that red cell for months. They would make me do them again and again.’

Maguire takes ritalin and mood stabilisers. He reckons that the medication has ‘unlocked all of this’. He works standing up in a cramped office. By his drawing table, a bin overflows with coke cans.

When Patrick Maguire left prison, he likened himself to ‘a guided missile’ set to self-destruct. Many victims of miscarriages of justice struggle with drink and drugs on release and Maguire was no exception. Eventually, he ended up in the Priory Clinic in 2004. ‘They told me another six months of living the life I was living and I’d be dead,’ he says.

It was in the Priory when, as Maguire puts it,‘the art came back’. ‘Up until then it had all been black and all of a sudden the very first colour came to me and it was the red.’ I ask him if the creativity was a result of being in a ‘therapeutic setting’. Apparently not. ‘Like fuck. I didn’t do it in the art class. I did it in my own room,’ he replies like a shot.

Maguire dislikes the idea of being seen as a victim. ‘I see myself more as a witness,’ he says. I ask him if it irritates him that people insist on interpreting his work with reference to his well publicised and traumatic past.‘I don’t want to be hurting myself,’ he says. ‘My art is my bridge. If you take me back to the red cell, then I’ll talk about it. I won’t avoid it.’

After our meeting, he texts me and flags up a passage he wrote in 2016: ‘I didn’t wake up one morning and decide to be an artist. I just woke up.’

Proof magazine: ‘My life went from colour to black and…
UNJUST PODCAST: A prisoner's guide to self-isolation
2019: Another year in the Justice Gap
Black people disproportionately represented in 'missing'…
Oval Four: 'I've been fighting to have my name cleared since…