‘Prison: an expensive way to treat people inhumanely and badly’

‘Prison: an expensive way to treat people inhumanely and badly’ 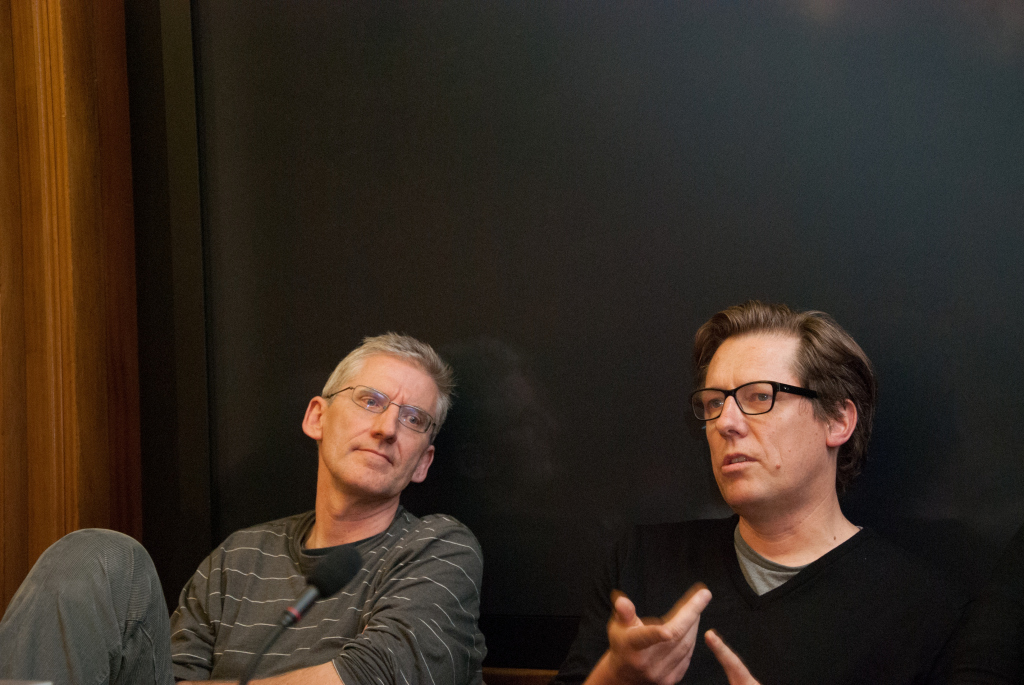 ‘Politicians need to stop playing KerPlunk with the prison system,’ said former prison governor and inspector John Podmore on Tuesday night.  ‘One day someone’s going to pull that final straw out. We need to be careful.’ Podmore was speaking at the third annual Prisoners’ Advice Service / Justice Gap debate, hosted by UCL’s Access to Justice Unit .

John Podmore (above) shared the panel with Clive Stafford Smith, founder of Reprieve; Hamja Ahsan, brother of Talha Ahsan, who was detained without trial in the UK for six years before being extradited to the US last October; Dr Sharon Shalev, research fellow at the Centre for Criminology, University of Oxford and author of Supermax: controlling risk through solitary confinement; Judge John Samuels QC, a former Circuit Judge and chair of the Criminal Justice Alliance; and Ian Birrell, former deputy editor of the Independent and a speechwriter for David Cameron. Main pic of Clive Stafford Smith and Ian Birrell.

With some 84,000 men, women and children in prisons and young offender institutions in England and Wales – and 81 of our 131 prisons overcrowded – conditions were bordering on the ‘cruel and unusual’, said the debate’s chair the investigative journalist and campaigner David Jessel (below). But just why are we getting it so wrong when it comes to prisons in this country?

John Podmore, who worked in the prison service for 25 years and governed three prisons, said the problem lies in ‘prison cultures’ where ‘obsessions with security lead to a broad brush approach’. Podmore was worried that, rather than taking a cooperative approach to running prisons in order to cater for the diverse needs of our prison population, the justice secretary Chris Grayling’s ideas to introduce prison uniforms and ban televisions represented the cherry on the top of an increasingly coercive prison system which, according to Podmore, was ‘an expensive way of treating people inhumanely and badly’.

So should we look to the US for tips on how to improve our prison system? Dr Sharon Shalev thought not. ‘Supermax prisons are excessive, ineffective and expensive,’ she argued. There were between 80-100,000 people in solitary confinement in the US, 25-30,000 of whom were in prolonged solitary confinement.

According to Dr Shalev (above), those in solitary confinement in a US prison spend 23 hours a day alone, in an often windowless cell. Their hands and legs are shackled when they are outside of their cell.

‘Those not mentally ill when they were placed in solitary confinement may very well become so as the mental stress of being isolated from other human beings becomes intolerable. Self-harm and suicide are rife in solitary confinement. But it is not easy to kill yourself in a supermax; they like to take very great care that state property is not harmed in any way.’
Dr Sharon Shalev

Hamja Ahsan (below) was all-too-familiar with the ‘stark’ conditions imposed by US supermax prisons, as his brother Talha, who suffers from Asperger’s, remained in pre-trial solitary confinement in a supermax in Connecticut. ‘It is traumatising that the brother I shared a bunk with is in a US supermax prison,’ said Ahsan. ‘Why a British national who has never been convicted of anything should be transferred to these conditions is absolutely abhorrent,’ he added.

Penal optimist
Whilst we may not want to mimic the US ‘supermax’ style of imprisonment here in the UK, self-confessed ‘penal optimist’ Judge John Samuels QC (below) argued that there were some lessons to learn from the US – namely the ‘hugely valuable reform programmes pioneered by the drug court movement’ which, he said, evidence a change introduced by a society ‘sick and tired of the panacea of incarceration’.

Judge Samuels put forward his proposition that once individuals had been found guilty and sentenced by a court, the judiciary is in a ‘far better position than any prison or probation officer’ to decide what happens next.

‘One thing that comes out from individuals in the grip of addiction of drugs is that they do not want to let their judge down’, he contended, ‘and that is more powerful than anything a prison officer, probation officer, or an enthusiastic Serco employee can achieve.’

A member of the audience was quick to disagree with Judge Samuels, arguing that ‘the judiciary are not the right people to decide what happens after sentencing’ as a result of the inevitable ‘disparities between the experiences in life of the judiciary and the people before them.’

A sign of state failure
Ian Birrell agreed with Judge Samuels that there is an ‘incredible range of innovation in America’, which we are lacking in the UK. Birrell outlined a ‘remarkable’ revolution in justice in the US, which is being led by ‘the most hardcore Republicans’. ‘The Right suddenly realised that prison is a sign of state failure,’ said Birrell, ‘it’s too expensive and it doesn’t work.’ So instead of building more prisons and jailing more people, Texas is diverting funds to sophisticated rehabilitation programmes to reduce recidivism. ‘They’ve taken the language of the Right to put forward an idea of the Left,’ said Birrell. And it has worked: ‘Texas crime rates are falling faster than pretty much anywhere else in the US,’ he said.

Despite being firmly against all aspects of the US prison system – ‘I don’t agree with prison at all. I won’t say anything positive about US prisons’ – Clive Stafford Smith was able to pick out a lesson from Texas’s rehabilitation revolution: ‘We need to look for allies where we find them. It’s important for the Left to speak the language of the Right; the Right stole our language after all. We need to be able to talk to Republicans and Tories.’

Stafford Smith went on to criticise the ‘utterly bizarre’ approach of many politicians who, although all more or less agree on what would make an ideal society, tend to go about achieving it in the wrong ways: ‘we won’t get closer to the ideal society by building more prisons,’ he said.

So what’s the main message for Grayling et al following Tuesday’s debate? According to Judge Samuels, ‘only a tiny minority of people need to be incarcerated.’ ‘People think if defendants are not incarcerated they “walk free”, but this is not so,’ he said. Polarising our penal policy into a binary system of going to prison or walking free ‘perpetuates a system in which rehabilitation seems to be doomed.’

If the solution lies in further debate around the alternatives to prison, we’re likely to have it, concluded John Podmore. With Vicky Pryce and an array of News International journalists currently caught up in the criminal justice system, we’re likely to witness an ‘upsurge in the middle classes concerned with penal policy,’ as David Jessel succinctly put it.

UNJUST PODCAST: Prisons and Covid-19 'the perfect petri…
One in five prisoners out of their cells for less than two…
Inquest to look at suicides HMP Durham following death of…
HMP Wandsworth: ‘crumbling, overcrowded, vermin-infested…
Martyn Day: 'History will treat our army and politicians in…