‘Popularity is her only objective, no matter what values have to be trampled upon to win it’

‘Popularity is her only objective, no matter what values have to be trampled upon to win it’ 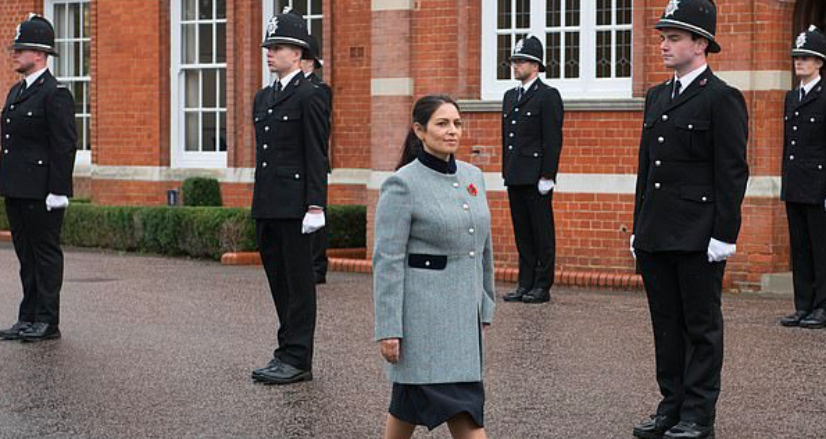 If a tree falls in a forest, but no one hears it fall, does it make a sound? It would perhaps have been helpful for the Home Secretary, Priti Patel, to consider a reinterpretation of this particular philosophical conundrum before bringing forward her reforms to the right of protest. If a protest blocks a public highway, but no one drives by, has it blocked the highway? And more to the point, was it even a protest?

Inconvenience, frustration, and upset are integral to the right of protest. If you take the right of people to disrupt the lives of others for a cause they believe in away, you have taken away the element that is arguably most fundamental to the right itself. No one doubts the fact that the Insulate Britain protesters, who have spent much of the past month variously gluing themselves to the tarmac of the M25, chaining their necks together, and generally making themselves as much of an immovable nuisance as possible, are hugely irritating. Indeed, it is reasonable to question if they are not doing more harm than good to the cause they so ardently espouse. Had I spent much of the past month idling in a traffic jam – ironically spouting ever more carbon dioxide into the atmosphere to boot – I doubt I would be much more sympathetic to the cause of climate change, especially if I was sceptical in the first place.

But crucially, the right to protest is not just about creating difficulties for members of the public – a protest that does that alone is not worth the candle – but about how these difficulties put pressure on the government to engage with the issue and to change its policy. If Priti Patel’s reforms go through, this will become a pressure that protesters will find almost impossible to bring to bear. No longer will protests have to risk causing serious public disorder for the police to impose restrictions, but instead will merely have to cause ‘serious unease’ to those nearby, while the bill strips away many of the previous limits on police powers over protest, instead letting the police intervene if the noise caused ‘may result in serious disruption to the activities of an organisation’, or if the noise ‘may have a [significant] impact on persons in the vicinity’. More alarming than this is the fact that the bill gives the Home Secretary the right to define what is meant by ‘serious disruption’ – and what, therefore, is unlawful – with little, if any, oversight. If the bill passes in its current draft, it will give home secretaries the power to shut down protests they disagree with because they disagree with them, rather than because of any real disruption they are causing or may cause.

As Liberty, the civil rights organisation, have put it, the bill ‘contains a concerted attack on the right to protest’, and even Theresa May, another authoritarian-minded home secretary, suggested that ‘future home secretaries may not be so reasonable’ in how they exercise the powers contained within the bill. While May’s concerns may be towards some future, even more despotically inclined home secretary, for most of us, the fear of Priti Patel possessing such powers should alone be concerning enough.

Judging by the rapturous response her speech was met with earlier this week, this is not, however, a concern the Conservative party faithful share. Patel’s ultimate goal is certainly to be the successor to Johnson in No. 10, and illiberal bills like this will do much to further endear her to a membership that is more enamoured of authoritarianism than of conservative principle. Popularity is her only objective, no matter what values have to be trampled upon to win it.

More broadly, the government will be counting on the fact that more people are frustrated and alarmed by the high-profile protests we have recently seen, whether Black Lives Matter, Extinction Rebellion, or Insulate Britain, than they are by its attempts to limit the right to protest itself. No matter that these protests have brought public attention to deep-rooted, structural challenges and issues in our society that must be addressed. The government would rather we pretended they didn’t exist, while granting itself the powers to ensure that in the future, we don’t even know that such issues exist.

This inability to comprehend – or this choice to deliberately ignore – the real issue was a theme that ran through the whole of the Conservative Party Conference. We saw the prime minister promising to level up the ‘national living wage’ – a clever relabelling of what is really minimum wage – while simultaneously ending the universal credit uplift for the very poorest in society, apparently incapable of recognising that the promise of a greater salary in the future is going to do little to put supper on the table tonight. We saw the Home Secretary refusing to make misogyny a hate crime on the basis that it would unduly affect the workload of the police, as though crimes are based upon police capacity rather than community values. We saw the Foreign Secretary promising to build a ‘network of liberty’ with countries that included Hungary, Poland and the Gulf states, countries that do not so much celebrate liberty as grind it down under a jackboot’s heel.

Indeed, it is a problem that regularly confounds the current party of government. A few weeks ago, we had the prisons minister promising that the construction of two new prisons would help ‘drive down crime’, as though the mere presence of penal architecture serves as a deterrent for the penally minded.

As Boris Johnson’s speech on Wednesday confirmed, this is a government that is willing to identify a problem, but that will only choose the policy in response off the back of its popularity, not its efficacy or its principle. That is why we have a Conservative government who is willing to go up against the interests of its natural allies, like business owners and private investors, even incurring the wrath of the Adam Smith Institute, the Thatcherite think tank who condemned Johnson’s speech as ‘economically illiterate’.

In some ways, this could lead the Conservatives towards the centre ground, giving liberals something to cheer as we see a Conservative party forced by political expediency to adopt policies that remedy inequality whether a relaxation of the planning laws or a change to the taxation system are little more than fig leaves, inadequate reforms that do nothing to change the reality on the ground. Meanwhile, in those areas where its voters are less liberally inclined, such as penal reform or the right to protest, the reforms do exactly what they say on the tin, changing Britain into a society where dissent is not brooked and where justice is a four letter word. This approach might turn the Conservatives into an election-winning titan. But it will turn Britain into a very ugly country too.