One in seven children pleading guilty to offences could be innocent

One in seven children pleading guilty to offences could be innocent 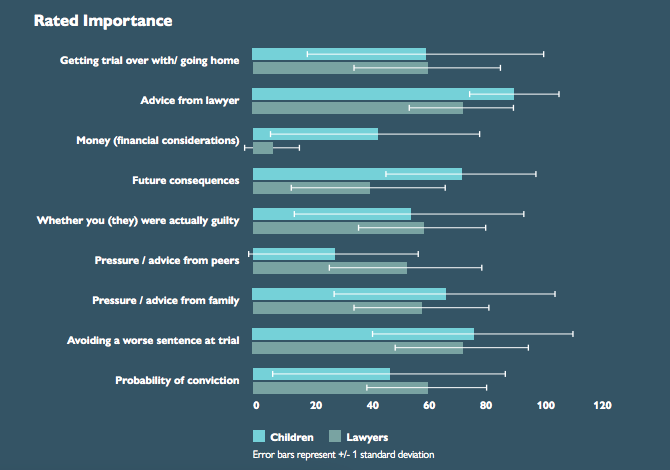 One in seven children who plead guilty could be innocent, according to a new study from the University of Exeter Law School’s evidence-based justice lab to better understand the pressures that young people face when deciding whether to plead guilty.

The average estimate among 27 lawyers that took part in the research was that 15% of children who plead guilty were ‘actually innocent including having a viable defence’. The researchers also interviewed 19 children who had pleaded guilty, of whom only two were happy with the punishment they received with seven describing themselves as ‘unhappy’ suggesting they were actually innocent.

The researchers argue that the system of ‘incentivized admissions’ might be inappropriate for children. They highlight the risk of lawyers without specialist training or experience in youth justice  ‘failing to provide appropriate representation to children’.  The study also calls for greater flexibility in the ‘sliding scale’ of sentence reductions recognising children may not be able to understand evidence so easily or make decisions so quickly.

‘Teenagers are particularly susceptible to pleading guilty to crimes of which they are innocent or have a viable defence,’ Penelope Gibbs, director at Transform Justice, told the Daily Telegraph. ‘Yet the consequences of pleading guilty are life changing. As well as being labelled as a criminal, the teenager will acquire a criminal record which may stop them getting a job decades later.’

According to the report, children are ‘incentivized to plead guilty’ when accused of a criminal offence. ‘Pressures including from fear of detention, time limits, the desire to avoid trial, and peers and family are key influences in plea decisions,’ the report says. ‘Partly as a result of these pressures, innocent children are very likely to be pleading guilty.’ Children with behavioural and developmental disorders may be ‘systematically pleading guilty more often than their peers’ regardless of factual guilt, as might children from minority ethnic backgrounds compared to their white peers.

Children can receive a reduced sentence in court if they plead guilty of up to one third compared to the sentence they would receive if convicted at trial under the Sentencing Council’s guidelines. The discount reduces the later the plea is entered. ‘Importantly, the guilty plea discount can result in the child receiving a different type of sentence than they would be facing if convicted at trial. So, a child could be given a community sentence if they plead guilty but face custody (typically a detention and training order) if found guilty at trial.’ Plus, pleading guilty avoids the need for the child to participate in a full trial. ‘This incentive to plead has the potential to be particularly important for children, who are often overly sensitive to short-term benefits, and who find the criminal justice environment particularly challenging,’ the research states.

Respondents were asked to rate the importance of certain considerations in guilty plea decisions. See man picture. ‘The range of factors rated as more important than factual guilt in decisions to plead guilty highlights the complex nature of plea decisions for children, and also the risk that the influence of factors other than factual guilt could lead innocent children to plead guilty,’ the report said.

I had a case involving children who did not accept that they had committed the offence that they were accused of. I advised them of the credit for guilty pleas, but they pled not guilty. The judge then asked me why they were pleading not guilty given that they were eligible for a referral order. I then went back and explained to the clients that they would be given a referral order if they pleaded guilty and that this was a nice sentence. They then decided to plead guilty.

Children 'systematically pleading guilty' to crimes that…
Young People and Criminal Appeals: can you help?
Thousands of people held on remand 'for months, sometimes…
Young defendants pressured to plead guilty in 20 minutes
'Not guilty' pleas increase in attempt to exploit court…