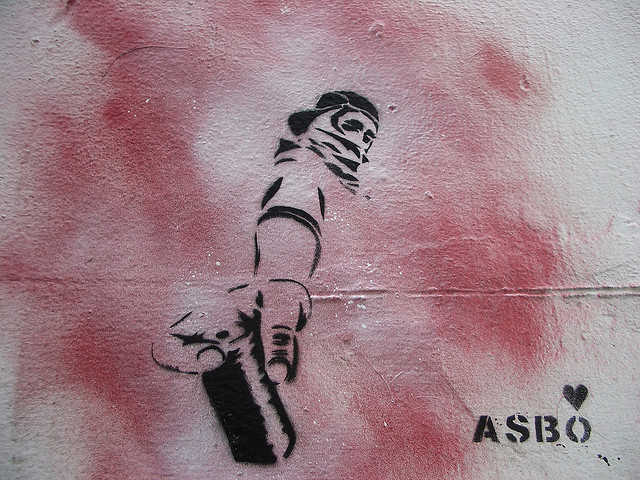 The injunction will be imposed on the balance of probabilities, rather than beyond reasonable doubt, if it is considered “just and convenient”. It is an all out attack on civil liberties and is likely particularly to affect teenagers and young people.

Why does anyone think these new orders will work any better than ASBOs? Over two thirds of the ASBOs imposed on under 18 year olds have been breached. This is hardly surprising since ASBOs enforced strict and quite ridiculous rules. A 13 year old from South Shields was banned from riding his bike and seeing four of his best friends for two years; four children in Swansea were threatened with ASBOs for aggressive snowballing; and a 15 year old from Cambridge received an ASBO for persistent “hedge hopping”.

Hundreds of children have been imprisoned for breaching their ASBOs, leaving them more likely to be drawn into committing serious crime. But ASBOs were beginning to wane in popularity as police found better ways to deal with the few teenagers who were being genuinely anti-social.

The government has brought in these new orders in order to “streamline” the process- for which read make it quicker and easier for authorities to impose them. Under new laws, a child aged 14 who breaches his IPNA can be imprisoned for three months, even though it may have been imposed on the basis of hearsay evidence.

The Standing Committee for Youth Justice is worried that the new laws will result in teenagers being demonised and disproportionately punished. Already the relationship between teenagers and the police is pretty poor, so poor that much teenage on teenage crime is not reported.

Already there is a lot of intolerance of teenagers just being teenagers. The British Crime Survey asks adults every year what is the biggest anti-social behaviour problem in their area and the answer is always teenagers hanging about on the street. A mother told us of intolerance in her estate of four-bedroom houses:

“We moved here with our 4 kids assuming there would be loads of kids to play with. This is sadly not the case, there are loads of middle aged childless couples who go mad as soon as any child dares to play in the street. A few years ago my son and his mates were in the habit of standing at the end of the 40 foot turning circle in the cul de sac, outside our house, about six feet apart from each other, chatting and passing a soft football on the ground to each other. The neighbour opposite went mad, ranting about his car and swearing at them. The ball never went within twelve feet of his car, which should have been parked on his drive anyway.The upshot was, a policeman round our house threatening our lovely mild mannered, good as gold son with an ASBO, on the say so of this man, basically for standing in the street rolling a football to his friends”.

We are worried that these kind of incidents will become common if the new IPNA comes in. This will lead to fewer teenagers playing outside, and to their becoming fearful of being outdoors at all.

The campaigners of ReformClause1, an unusual alliance of the Christian Institute and the National Secular Society, are also concerned about the implications of the new law for free speech. They fear the IPNA could be used to prevent protest, carol singing and bell ringing. One of their supporters, former DPP Lord MacDonald said:“Do we really need the police and the courts to deal with incidents of annoyance? Should we not just accept that the risk of feeling annoyed is a fair price to pay for living in a society which values free speech?”

The fate of the IPNA will be sealed in parliament in the New Year. But if you feel uneasy about a law outlawing “conduct capable of causing nuisance or annoyance” do sign our petition, or write to your MP.

Why are the courts sending mentally ill people to prison?
'If there was any justice, Cressida Dick would have taken…
Supreme Court lowers standard of proof for inquest…
Anti-traveller injunctions potentially in breach of human…
Age disputes causing unnecessary trauma for refugee children