The British Red Cross has backed calls for a 28-day maximum for immigration detention in a new report focusing on the ‘traumatic’ impact on mental health of our system of immigration control. The study (Never Truly Free: the humanitarian impact drew of  UK immigration detention) draws on interviews with 26 of the charity’s service users detained at some point in the asylum system.

Five of the interviewees had tried to take their lives, four had considered suicide, and two had witness the suicides of others. Only one of the 26 claimed to have access to mental health support services. According to the Red Cross, living in uncertainty was ‘distressing’ both because they did not know if they would be returned to their country of origin and that they did not know when their detention would end.

‘Most reported that being in detention left them feeling like criminals,’ the charity said. ‘Some felt that being in prison would actually be better, since at least prisoners know when they will be released.’

‘Most detainees will have experienced some form of trauma in their life before detention, the effects of which can be exacerbated in detention,’ said the British Red Cross. ‘The harm caused by being detained does not end when an individual is released. Instead, it continues and is deepened by a lack of support and a damaging system of immigration control.’

The charity recommends that detention should ‘only ever be used as a last resort and for the shortest possible time’ and backed calls for a statutory maximum time limit of 28 days on the length of time an individual can be detained. It also made the case for ‘vulnerability’ screening to prevent such people from being detained at all and argued that detention should only take place as ‘a last resort’ to effect removal. 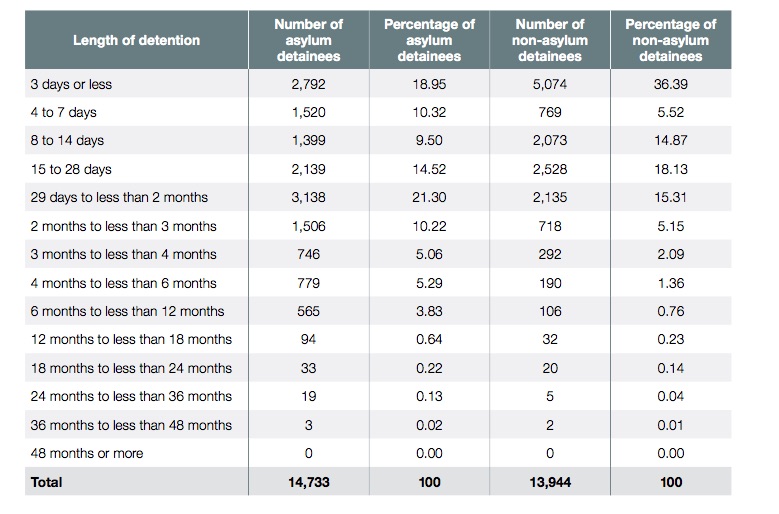 The study also found that life did not appear to improve when people were released from detention. More than half of the interviewees – 14 of the 26 – did not receive asylum support and were forced to rely on charities to survive. ‘The majority of the service users we interviewed have to report, most commonly every two weeks or monthly. The fear of reporting, and of being detained again, colours their life,’ it continued. ‘People often have to travel long distances to attend reporting centres. For those not on asylum support, finding the money for transport is a problem.’

The point they detain you is worse than going to prison. If you do a crime, police arrest
you and you expect a punishment. The case develops, it goes to court and you are told how many months you’re going to be in prison for. You are mentally prepared; you arrange your things, work and stuff. For the detention, it’s the sudden shock and attack.
Sabir, Pakistan

Only five of the interviewees were helped by a legal aid solicitor visiting the removal centre and only five kept the solicitor they had before being detained. A further five reported that no lawyers were prepared to take their case as they did not qualify for legal aid. They would need to be able to pay the legal fees.

‘It was hard to get a lawyer because a lawyer has to be sure of the case,’ said ‘Gabriel’ from South Sudan. ‘If not, they’re not going to agree and they can’t give you the legal aid.’